Football’s a step closer to coming home! Cray Wanderers FC have taken a significant step forward to securing planning permission to build a home to call their own. Cray Wanderers Football Club (CWFC) last night received the long-awaited news that Mayor Sadiq Khan had approved their application to build a new ground, community facilities and enabling development on the site of Flamingo Park, Sidcup By Pass Road, Chislehurst.

The fantastic news that the Greater London Authority (GLA) and Mayor Sadiq Khan, after consideration, were content to allow Bromley Council to determine the application itself, came through late yesterday afternoon. The club has been homeless since 1973, since then being forced to ground share at Oxford Road in Sidcup and, more recently, at Hayes Lane in Bromley. This application is the most recent chapter of a 12-year long struggle to find a home for the World’s Second Oldest Football Club.

Bromley Council’s Development Control Committee voted in favour of the scheme by an overwhelming cross-party majority of 11 to 3 in March 2018, and received great support from the local community, with over 570 registered comments of support from local residents, resident associations and community groups. The draft legal agreement (s106) and planning conditions were then drawn up between Bromley and the Club, before the application was referred to the London Mayor for ratification earlier this month.

The GLA noted that in addition to the support received by Bromley Council, the Mayor and Deputy Mayor for planning had received over 1,000 letters of support from individuals and organisations. The application is now subject to final sign off by the Secretary of State and of the s106. Gary Hillman, CWFC’s chairman, said: “We couldn’t be more delighted with the tremendous news our application has the support of the Mayor, it has been a very long road to get to this point and a real team effort!

“Although we still need to wait for final Secretary of State sign off, yesterday’s news is a huge step towards securing the future of the club today and into the future.

“I can’t begin to thank everyone who has been involved and has supported the dream of securing a home to call our own: the planning team, the incredible fans, Bromley residents, schools, local councillors, Bob Neill MP and the entire footballing community.”

Subject to the Secretary of State’s sign off, the board of CWFC are working towards finalising the paperwork and preparing to start works in April/May 2019, expecting the stadium to be open and ready for the start of 2021 season. 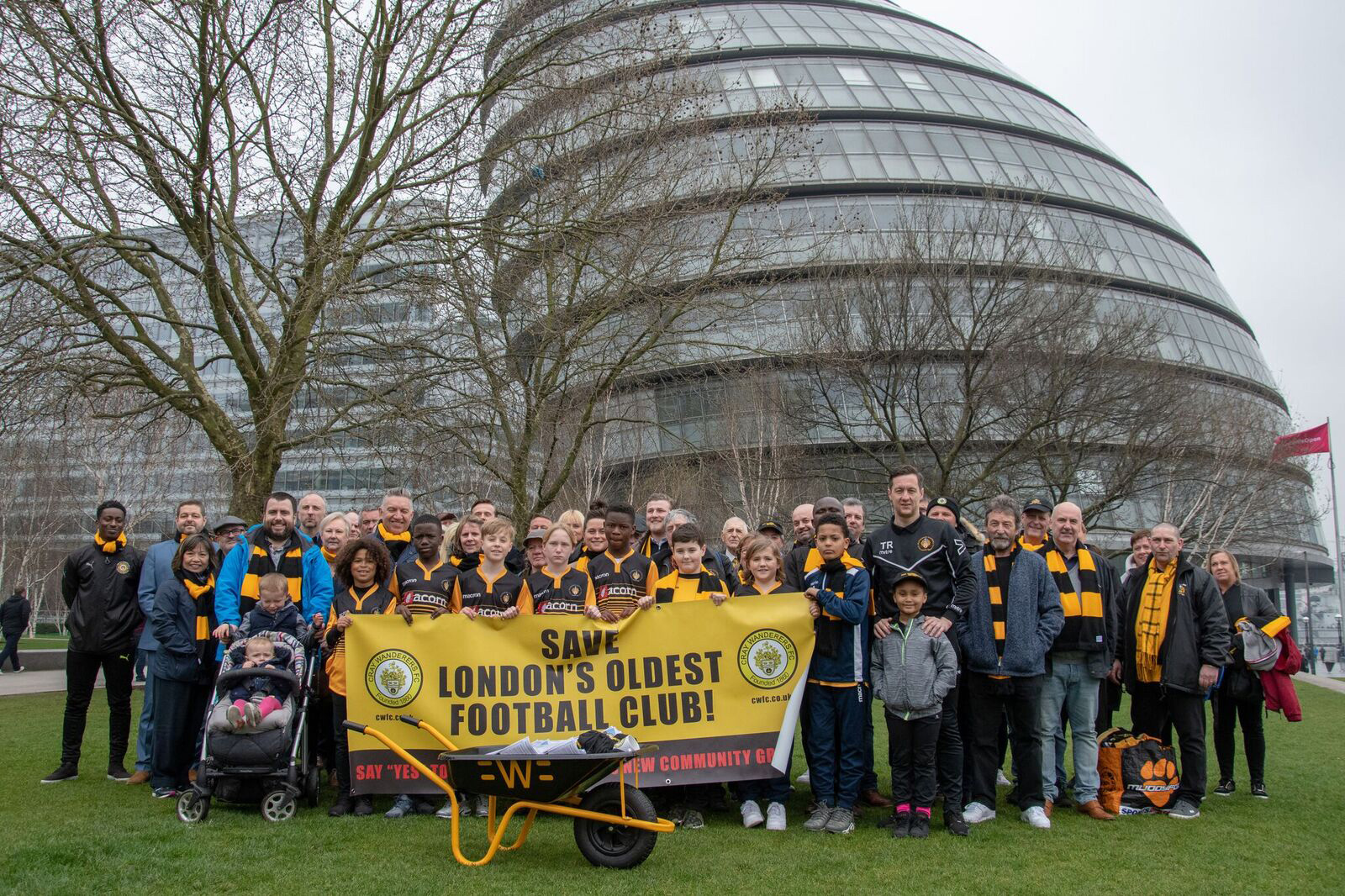 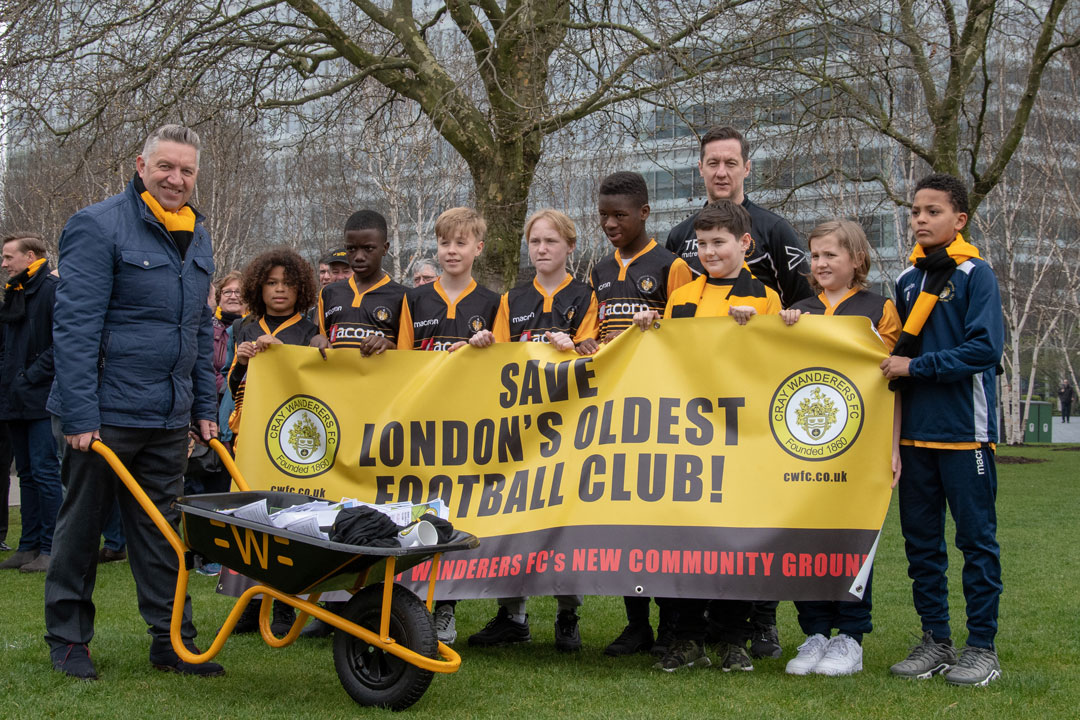 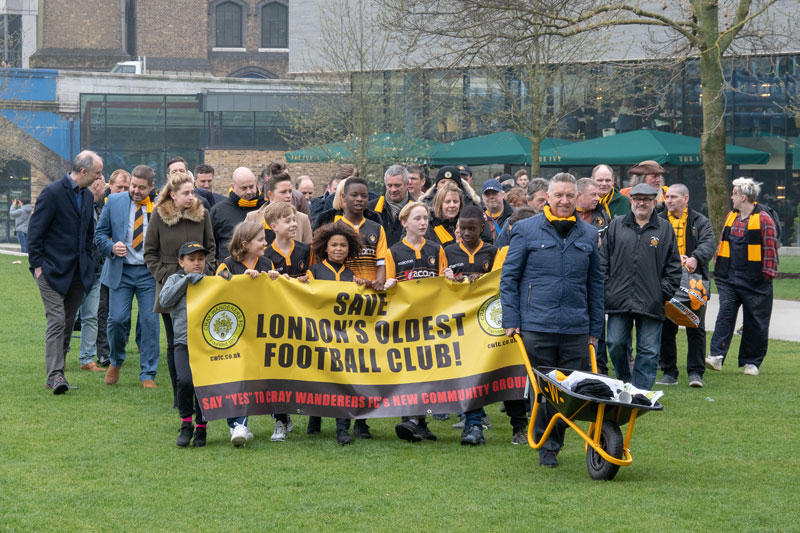 For those of you that missed Cray Wanderers on London Live click the button below!

“Cray Wanderers FC, London’s oldest Football Club, are pleased to announce their Planning Application to build a new home ground at Flamingo Park has been approved by Bromley Council and referred to Mayor Sadiq Khan, who will now be responsible for deciding its fate.”

“CWFC have consulted extensively with Bromley Council, local residents and the GLA over the last four years to provide the Club, its 14 teams and Community Scheme with a home ground. If the new ground is not approved, it may threaten the Club’s very existence, due to the end of a ground-sharing arrangement.”

“Overall support for CWFC’s plans has been overwhelming across all political parties, and Mayor Khan is now faced with the decision to approve the plans, or allow the current landlord to continue trading with unauthorised uses for waste disposal, disruptive boot fairs and a new licensed Lap Dancing Club, without any provision of community or sporting facilities, which is the site’s legal use.”

“CWFC urge Mayor Khan, within his 14-day referral period, to champion the scheme that will provide eight sporting pitches, a stadium, and a purpose-built Community Hub, to benefit sports fans of all ages into the future.”

Although the Club had anticipated a decision regarding the application to build a new home ground and community facilities on the site of Flamingo Park by this point, the Greater London Authority (GLA) have had queries regarding aspects of the scheme. These include the energy statement and 106 agreements. The Club and their planning consultants are working to answer all of these to enable the GLA to make their final decision regarding the application.

The GLA have also asked for clarification of the current use of the site and the square meterage of developed land, therefore to accompany the response we have created the below video, including drone footage, to show the site and highlight its current usage.

Gary Hillman, Chairman of Cray Wanderers FC “I thank our supporters for their patience, and please rest assured we are closely liaising with the GLA to provide the clarifications they have requested. We hope to be in the position for the GLA to revert a decision by the end of June”

Bromley Council’s Development Control Committee voted in favour of the scheme by an overwhelming cross-party majority of 11 to 3, after a presentation from Club Chairman, Gary Hillman and written support from local resident’s associations and The Football Foundation on behalf of the FA, amongst others.

The application received great support from the local community, with over 570 registered comments of support from local residents and few objections, alongside support from many of the local resident associations and community groups. Over 100 supporters of the scheme attended the hearing to show their support for the application. This decision will now be referred to the London Mayor for ratification and is subject to completion of a legal agreement (s106) and planning conditions to be agreed with the Council.

Gary Hillman, CWFC’s chairman said “This is a fantastic result for Cray Wanderers and for the wider football community. I have been completely taken aback by the by the huge response to the decision, my phone and social media hasn’t stopped since the approval was given and we have received support from other clubs all over London who have recognised out struggle over the years to find a home.

I would like to sincerely thank Bromley’s Planning Committee for appreciating the community benefits and genuine common sense of our revised scheme to finally provide Cray Wanderers FC with a home, I would also like to thank the incredible fans and Bromley residents for all of their support.

There are over 2 million people that are directly and indirectly involved in Football in London so to have the future of London’s oldest football club secure, especially in an area which hasn’t seen any real investment in football or other sporting facilities over the years is a huge positive. We have listened to the Mayor’s previous comments and the new scheme now features 100% affordable housing and a reduction in the scale and amount of development on the site, which we believe now meets all of the Mayors’ criteria and will positively support his housing targets and help the local community with much needed affordable housing.

We hope the London Mayor will now also be able to see the fantastic merits of the scheme, and will feel this revised application, which addresses all of his previous concerns, will be of benefit to the community, returning a disused piece of land to community sporting use. I am writing to the Mayor and would like to extend an invitation to visit the site to help appreciate the schemes benefits and to meet to finalise the details and conditions, so we are able to begin the project to provide this fantastic facility to the community.” 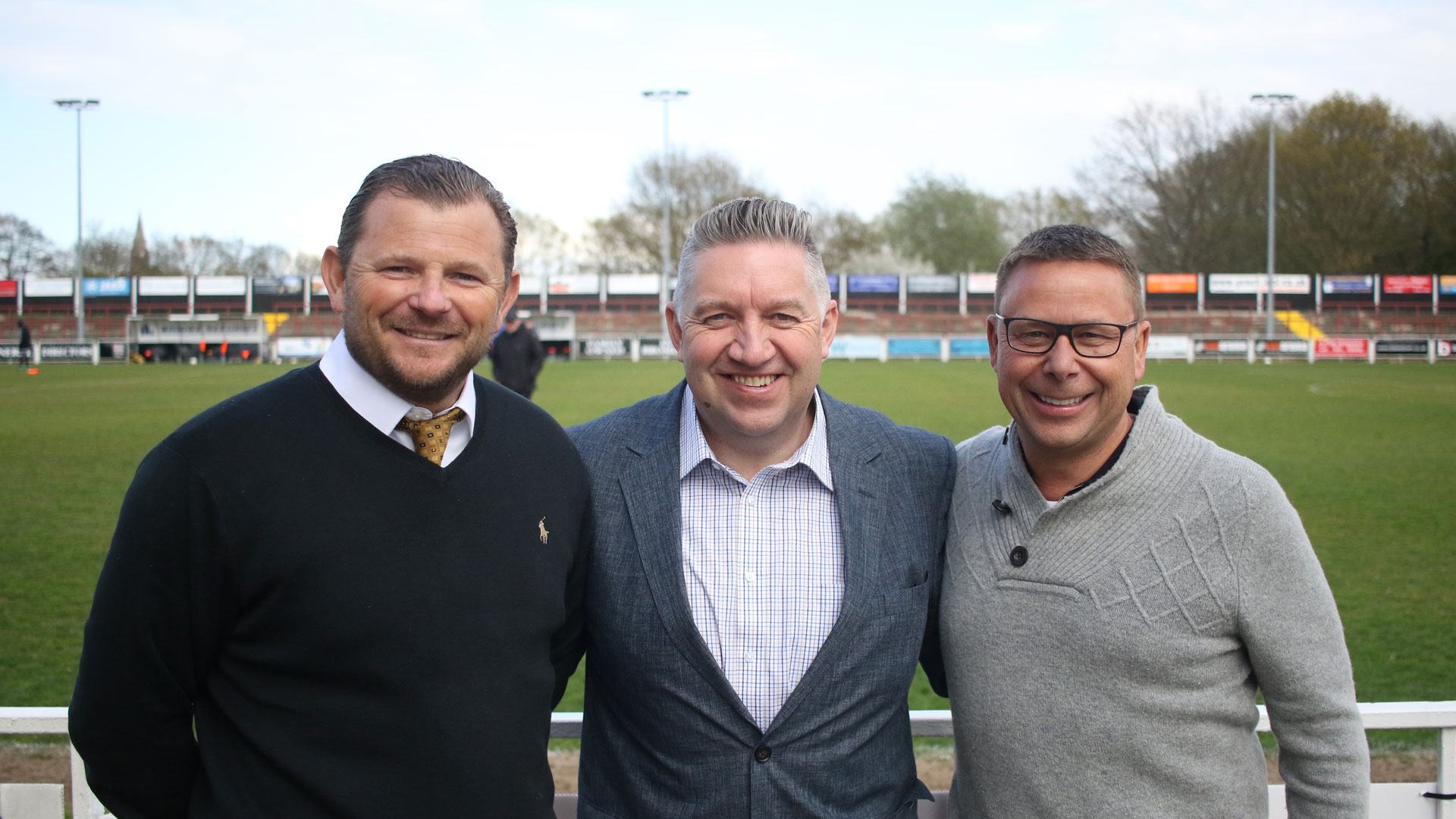 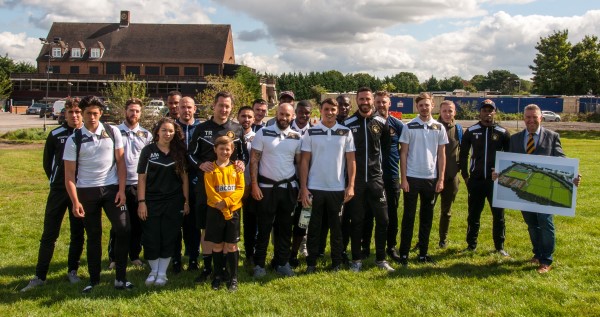 In the continued pursuit of securing a home ground and future for the oldest association football club in London, Cray Wanderers FC hosted an exhibition and public consultation of their proposed new planning application on the 7th,8th & 9th September 2017.

The exhibition was held on the proposed Flamingo Park site, A20 Sidcup by-pass, Chislehurst, BR7 6HL, whereby visitors could view the scheme on the potential site.

The revised scheme has been created through pre application consultation with the London Borough of Bromley Council and the Greater London Authority (GLA). The exhibition was an opportunity for local councillors, MP’s, residents associations, club supporters, sporting bodies and residents to understand the new plans and discuss their thoughts and comments ensuring the whole community has had the opportunity to comment before the plans are finalised and submitted. 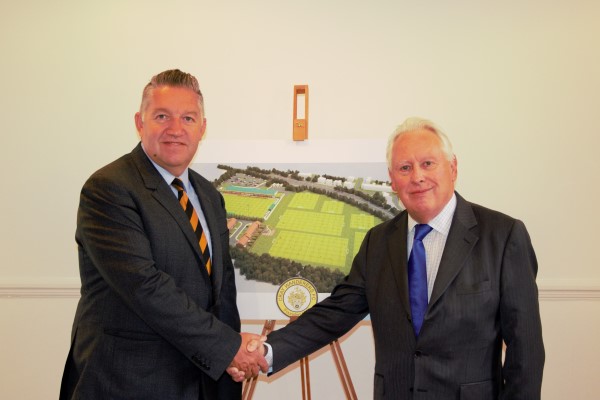 The club also conducted a successful pilot transport study on Saturday 9th September, collecting club supporters from Cray and Orpington and transporting them to Flamingo Park by coach to view the exhibition before taking them on to the home game against Chipstead at Bromley FC.

“We would like to thank everyone that took the time to join us at the public consultation, providing their thoughts, feedback and comments. The support of the local community was overwhelming and we are now looking forward to submitting the application with Bromley in the coming weeks.” – Gary Hillman, Chairman of Cray Wanderers Football Club. 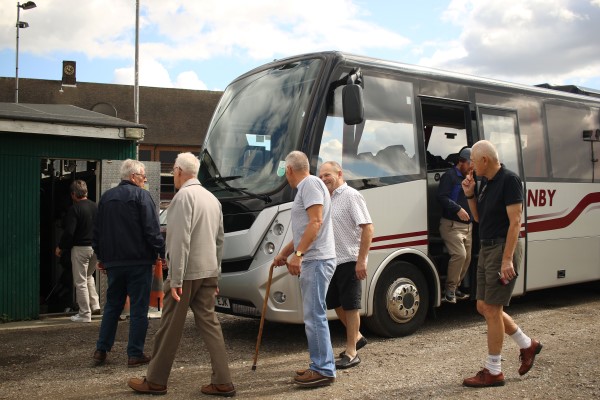 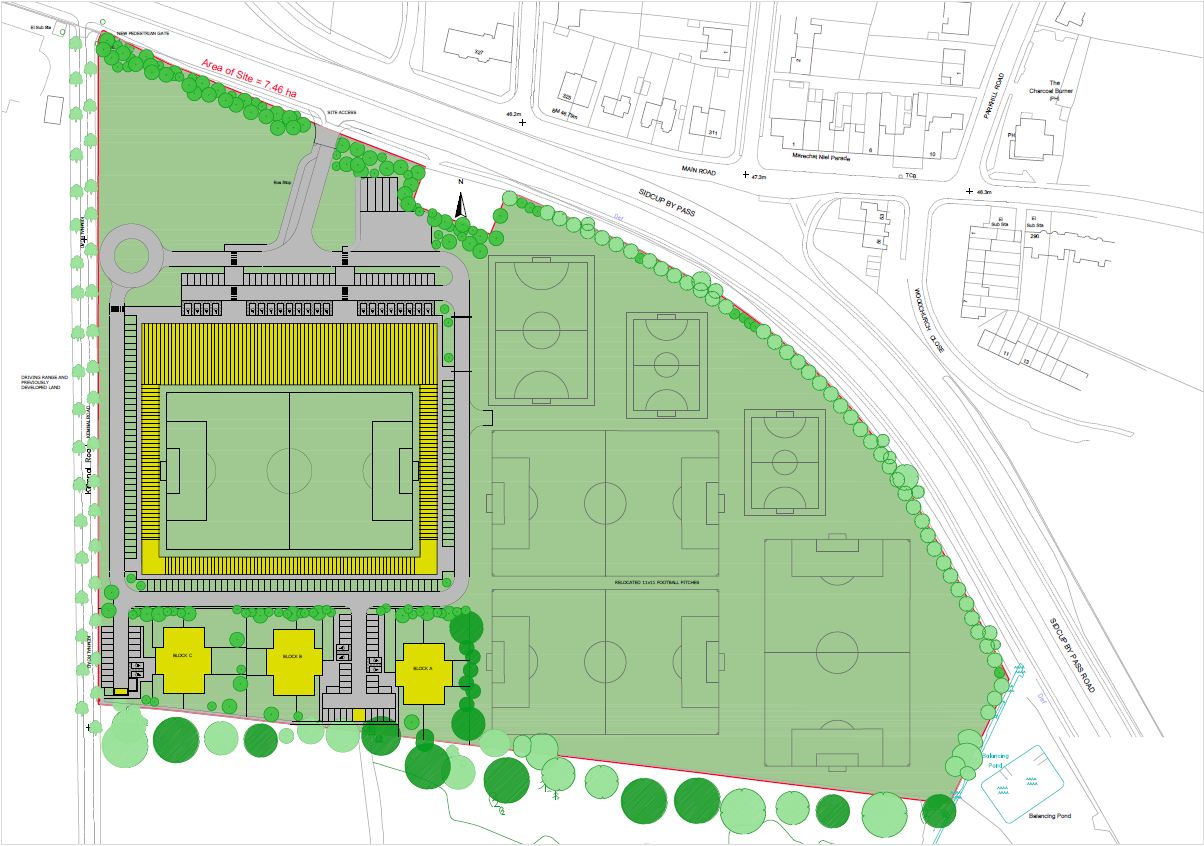 Chairman Gary Hillman says “Following the refusal of our original scheme by The Mayor we have looked at various ways to meet the criteria and to keep the openness of the Green Belt. Many members of the public have commented that there is an existing large 5 storey high nightclub/residential building and scaffold yard currently on the site and have been shocked by The Mayors decision, but we know it is vital to address his concerns.” 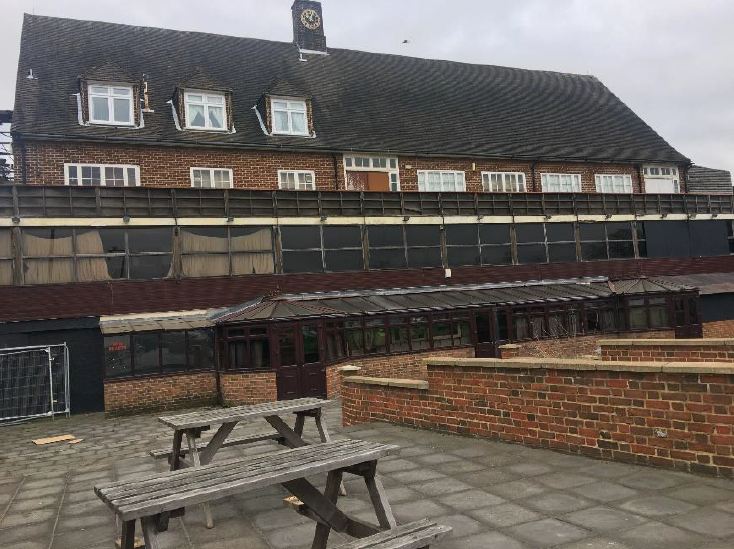 “We have therefore rotated the stadium and reduced the height considerably which is now below the height of the existing building and also the excessive tons of landfill earth which was permitted to be tipped a few years ago on the golf driving range neighbouring us.

As you can see by the quick site comparison, the new stadium is now approx. 6 m below the existing building and 3 m below the landfill earth.”

“We have now employed Specialist Consultants to carry out an exact ‘Design and Massing’ study of the buildings and site to demonstrate that our new proposal will have no impact of the openness of the Green Belt on the site, which will be a vital part of our new planning application.”