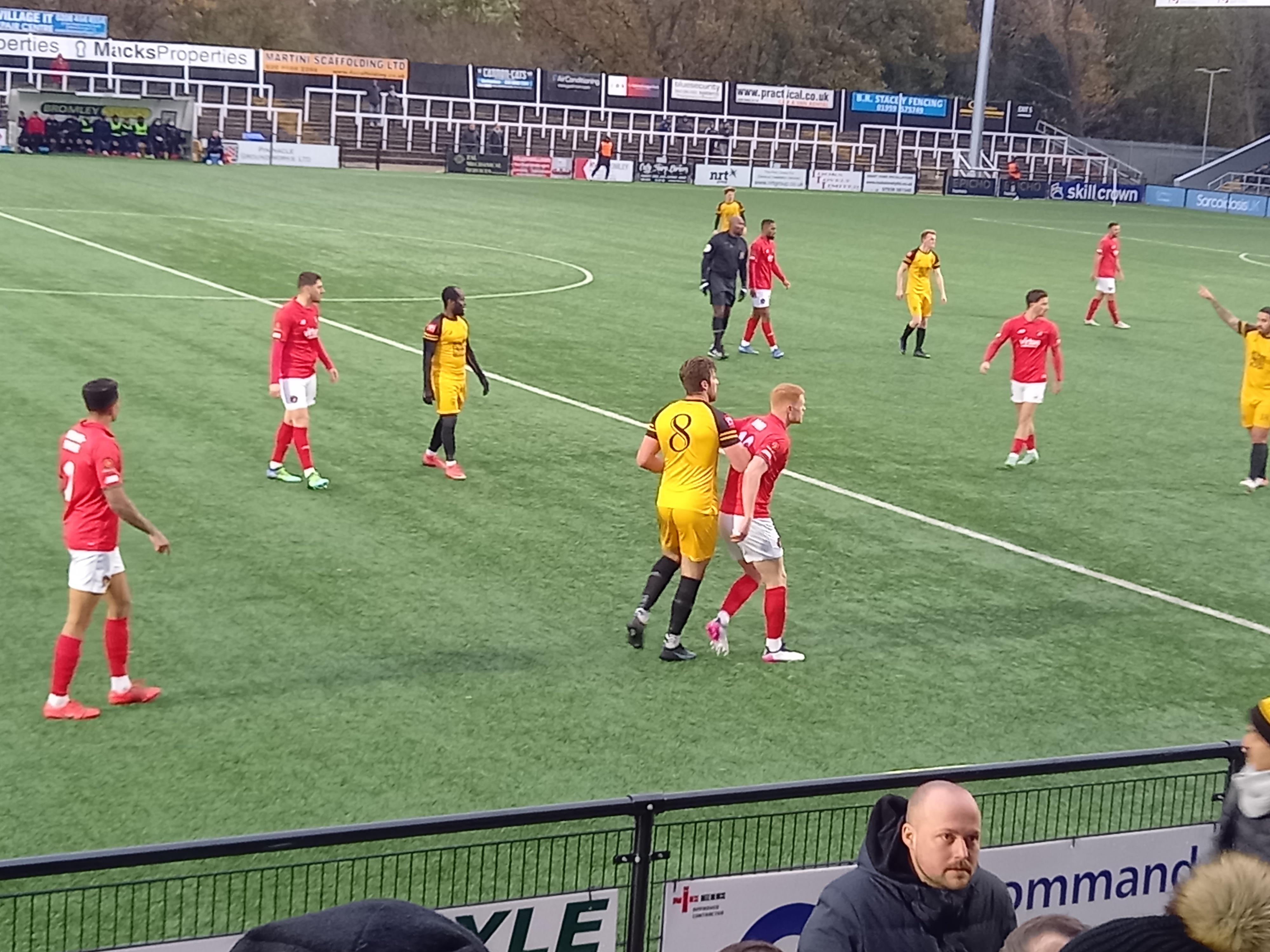 Cray Wanderers created a piece of history as the Wands reached the 3rd Round or last 64 of the FA Trophy for the first time after a dramatic afternoon at Hayes Lane with one of the upset victories of the round against National South highflyers Ebbsfleet United on a penalty shoot-out.

The Wands took the game by the scruff of the neck with two goals in three minutes late in the first half as first Jamie Yila showed a poacher’s knack to fire in after Fjord Rogers free kick was saved on 35 minutes and then shortly after plundered a second with a classy piece of finishing down the right of the area.

Ebbsfleet though showed resolve to come back in the last quarter of an hour and on 76 minutes pulled a goal back through top scorer Rakish Bingham. Then in the final minute drew level when Jack Paxman down the right won the ball and from the right byline cut the ball back to Will Wood to score and take the game to penalties.

From here though Cray showed great bottle and scored all five penalties and Michael West missed for Ebbsfleet with the score at 3-2 and Chris Dickson scored the winning penalty to advance to the next round.

On a bitterly cold, wintery and wet afternoon the conditions were there for a top class game of football and from the off didn’t disappoint. There were four changes to the Cray side following the 2-2 draw at home to Folkestone on Wednesday with Tom Hanfrey. Cameron Brodie, Daniel Uchechi and Fjord Rogers coming in for Kasim Aidoo, Anthony Cook, Adam Coombes and Sam Skeffington.  Dennis Kutrieb’s Ebbsfleet side have begun the season well but had been beaten at home by Maidstone United on Tuesday night and made a few changes to their starting lineup but were generally a strong outfit.

The game was dramatic from the off and Cray almost scored in the opening minute when a stray pass across the back line was pounced upon by Chris Dickson and from the right side of the penalty area fired over the bar from 14 yards.

Ebbsfleet looked to get back into it and Elliott Romain hooked well wide and was then denied inside the box by a fine tackle from Richie Danquah when about to shoot.

Fjord Rogers had an outstanding, industrious game up front for the Wands and in the 8th minute showed good strength to run from his own half down the left, took on Sefa Kahraman into the area but his final shot just lacked the power to test a diving Chris Haigh.

The Fleet started to seriously threaten from the 11th minute and from a corner down the left, Michael West’s cross into a crowded penalty area was glanced goalwards by Elliott Romain and was touched onto the crossbar by Jack Turner and the rebound was blocked.

Then down the left, Ben Chapman set up Kieran Monlouis for a shot which was pushed behind for a corner. A couple of minutes later, Turner made a tremendous one handed save to deny a near post shot down the right from Monlouis.

Cray were still playing well and Tom Hanfrey down the left whipped over a great cross aiming for Fjord Rogers but was flicked off a defender for a corner.

The game then had a brief lull before it seemed Ebbsfleet had broken the deadlock in the 27th minute when a left wing cross to the far post was turned in by Will Wood but after consultation with the linesman was judged to have been handled and the goal was disallowed.

This seemed to spur Cray and the Wands came close to scoring when down the right Dickson and Rogers combined to set up Cameron Brodie down the byline and his cross shot was palmed out by Chris Haigh.  Then at the other end Chapman fired over from a free kick outside the left of the area.

In the 35th minute Cray went in front after Jamie Yila was fouled just outside the penalty area.  From the free kick Rogers shot went through the wall and was pushed out by Haigh but following up Yila was on hand to score from close range.

Three minutes later Cray went further ahead when a terrific ball from Uchechi cut through the Ebbsfleet defence down the right and Yila pounced to tuck home from 8 yards to give Cray a bit of comfort.

Before the break there were half chances at both ends, Christian N’Gessan shot well over for Ebbsfleet while at the other end, Uchechi’s shot was held by Haigh. The last chance of the half fell to Ebbsfleet as Paxman’s shot was pushed out and Romain fired over from the rebound.

The second half it has to be said seemed from a Wands perspective to last a lifetime but Cray were at times quite comfortable with the lead with sporadic but incisive probing by Ebbsfleet looking to get back into the game.

In the 49th minute Ebbsfleet perhaps should have done better with a chance after West set up Wood down the left of the area but fired over the angle of post and crossbar.

For Cray, Dickson set up Jai Reason who fired well over and Rogers had the ball in the net but was ruled out for a push on Haigh.  At the other end a Paxman corner was cleared out to Wood whose shot on the turn was deflected to Turner.  Then again when well placed Wood shot wide.

The game was just starting to take a breather and became a little stop start which helped Cray but Ebbsfleet did come close to pulling a goal back when Romain set up substitute Alfie Egan and his shot was well pushed behind by Turner round the left post.  Shortly after another Egan shot was held by Turner.

The pressure was starting to tell as Ebbsfleet substitutions gave them impetus and one of them, leading scorer Rakish Bingham began the comeback on 76 minutes with a classy finish when Egan found Tobi Adebayo-Rowling and his cut back was stroked home by Bingham into the bottom right corner from 12 yards.

Shortly after Anthony Cook shot wide but Ebbsfleet were looking more and more dangerous and from a free kick on the left edge of the area, Paxman’s shot curled round the wall and was turned round the post by Turner once again.

Then Turner did superbly to make a fine blocked save to deny Romain with a shot from Craig Tanner’s pass.

The game was heading into the final minute and Cray who for the first time were looking weary were pegged back to 2-2 when a ball down the right sought out Paxman who took on the advancing Turner and from close to the byline pulled the ball back to Wood to turn the ball in from ten yards.

Despite some late pressure Ebbsfleet couldn’t score a winner and with the game now played in very cold conditions extra-time may have been a stretch for both teams so a penalty shoot out was the right verdict to decide the game.

The penalties were taken at the Glyn Beverley stand end and Cray stroked home their first three kicks with Cook, Rogers and Tom Hanfrey scoring confidently. Bingham and Paxman did for Ebbsfleet but their third penalty from Michael West went over the bar. Jai Reason and Ben Chapman scored to make it 4-3 and was then left to Chris Dickson who won this competition last season with Hornchurch to show the necessary composure to fire into the bottom left and win the game for Cray.

The FA Trophy sometimes is much-maligned as a competition as perhaps of getting in the way of other things ie. League or a decent FA Cup run but this game reinforced the importance of the competition of this level and the desire that cup tie football brings to bring out the best in players especially if underdogs as Cray were today.

Some players really came of age today for Cray, Danquah and Hanfrey were excellent at the back, Barton has been consistent for a few games now, Brodie was disciplined in midfield, Rogers was superb up front living up to his Olivier Giroud tag and Yila was sharp as a tack with his two goals. Special word though for Jack Turner who made at least five, possibly six crucial saves in the game at 0-0 and at 2-0.  For the visitors this could still be a great season for Ebbsfleet currently second in the National South and in a very tight league will surely pick up more points than they lose between now and April.

The Wands still need league points and on Tuesday head to Bowers & Pitsea for a chance to get their league season going but can be forgiven for looking back on a great day and look forward to Monday’s 3rd Round Draw.