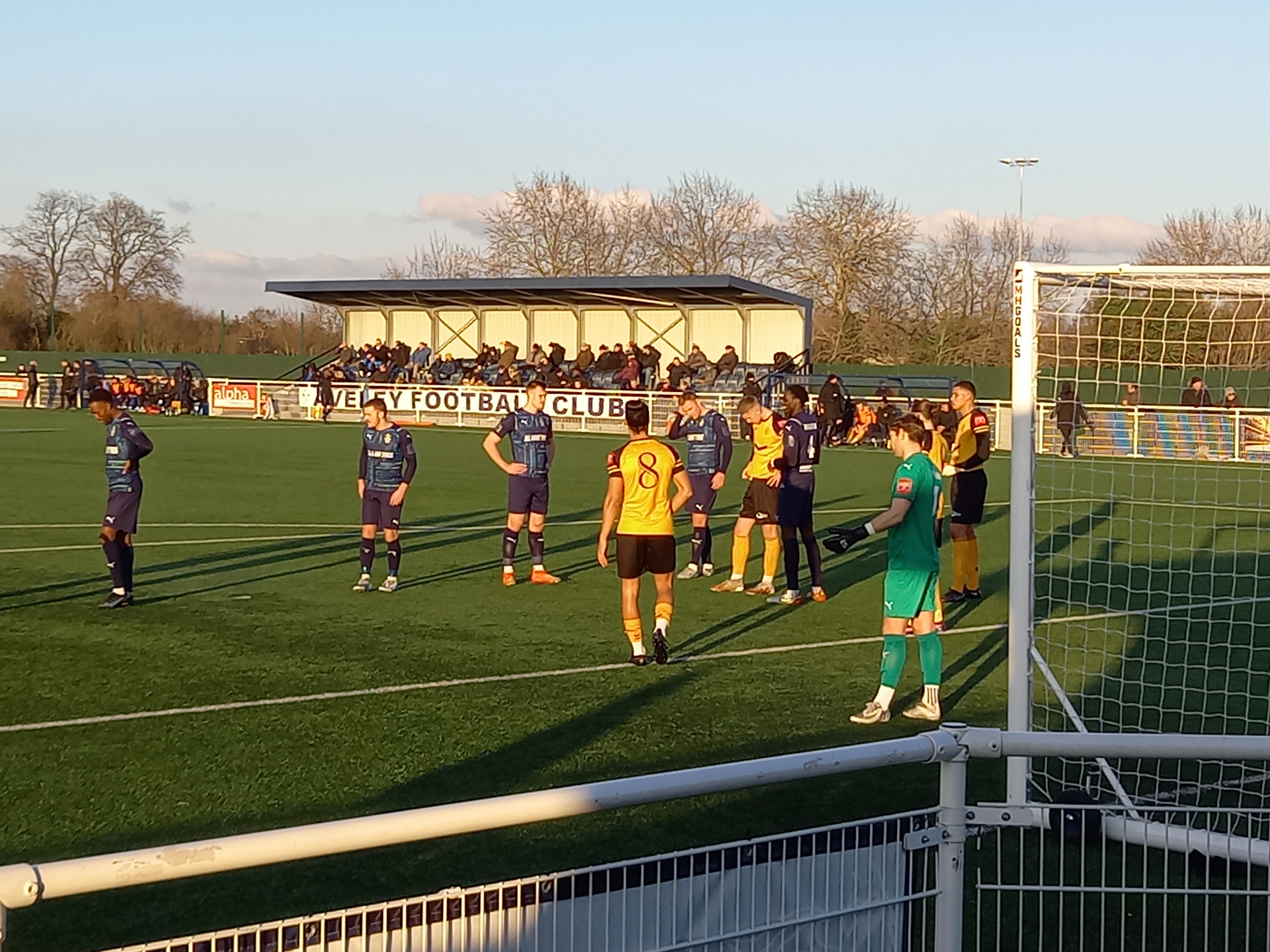 Cray Wanderers moved up to 2nd place in the Isthmian Premier league table after a first half goal from Tom Derry in  a hard fought encounter against sixth placed Aveley at the Parkside.

Cray were looking to bounce back from last Sunday’s defeat to Bishop’s Stortford and had to absorb some early pressure from a confident Aveley side and Shaun Rowley did well to deny Oli Coker with a shot pushed round the post.  Cray though hung in the game despite the loss of Mitch Chapman through injury and after Anthony Cook saw a free kick brush a post, Cray edged in front.  Sam Wood’s free kick out on the right was floated towards the far post and Jalen Jones header was blocked by keeper Jonathan North but Tom Derry was on hand to follow up from close range for the Wands 50th league goal of the season.

The second half saw few chances but some late pressure from Aveley with seven additional minutes added on meant a tense latter stages and George Sykes saw a shot pushed out and late on Temi Babaloa’s header was also well held by Rowley but Cray held on for a gritty three points.

On a fresh but sunny afternoon, Cray began the game in 3rd place, three points behind leaders Hornchurch whose match at Wingate & Finchley was postponed.  From the side which started against Bishop’s Stortford, Jephte Tanga returned after missing the last two games in place of David Ijaha. Danny Bassett who left the field on a stretcher on Sunday was passed fit to play.

Aveley have been in good form and kept an unchanged side from their last league outing against Wingate & Finchley last Saturday but since then beat Leatherhead in the Isthmian League Cup Quarter Final with a much changed team.

The Millers began the game on the front foot and pushed Cray back for the first quarter of an hour and came close when Oli Coker’s shot was pushed around the left post brilliantly by Shaun Rowley.  From the corner, George Sykes header was cleared by the Wands defence.

This was shortly followed by a flicked header wide from Sykes from Jon Nzengo’s cross.  Cray were rocked back on their heels at this stage but Matt Weaire and Jalen Jones were resolute at the back and hung in the game.  There was a blow when Mitch Chapman went down with a leg injury and although he carried on for a while went off to be replaced by Anthony Cook just before the half hour. 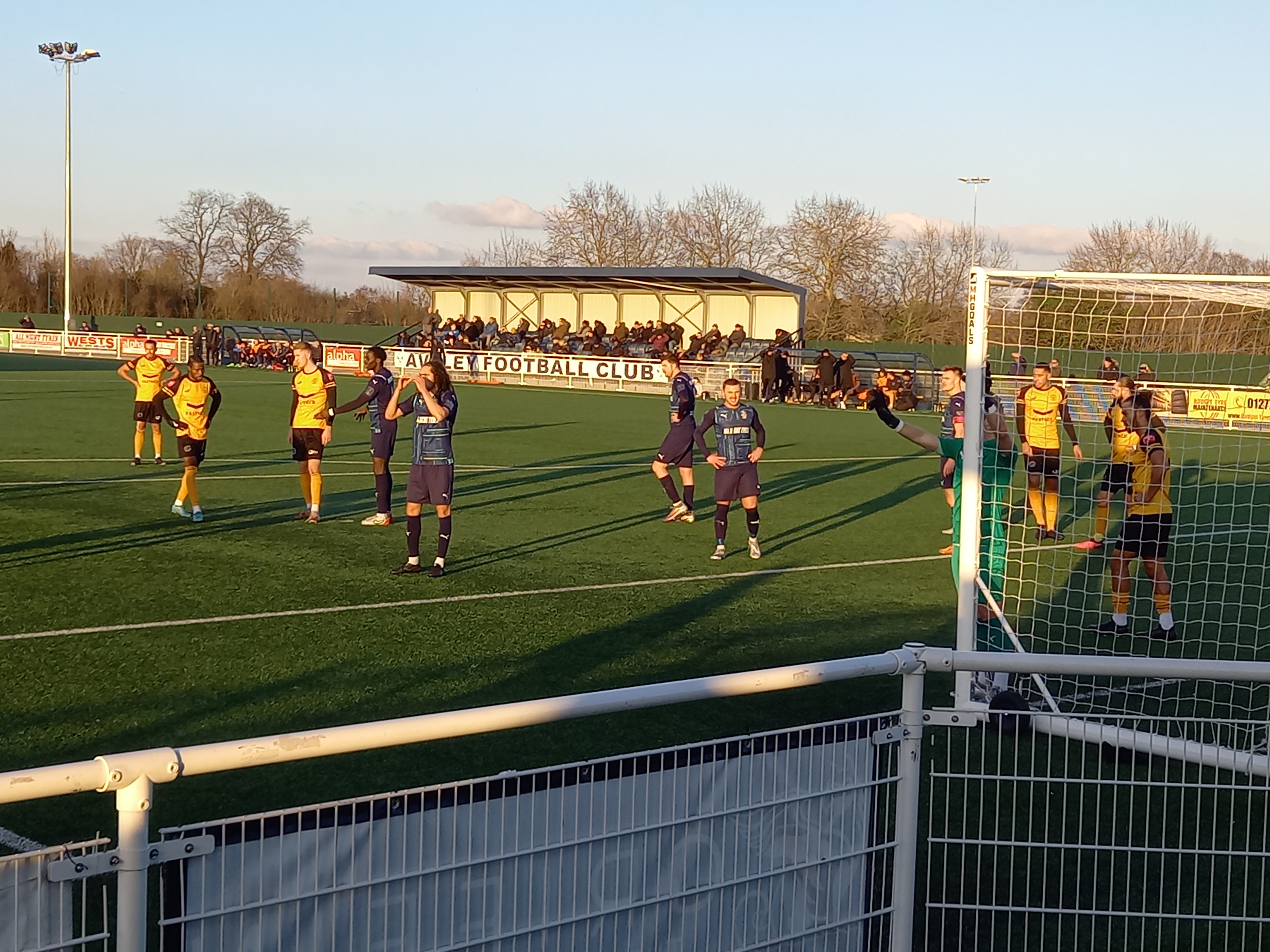 Jephte Tanga grew with confidence as the half went on and drew a foul twenty five yards from goal and from the free kick Cook’s strike just went wide via clipping the right hand post.

Cray looked to have taken the sting out of the game and in the 38th minute took the lead after another foul on Yahaya Bamba just outside the right of the penalty area.  From the free kick, Sam Wood’s cross to the far post was met by a strong header from Jones which Jonathan North blocked but following up Tom Derry was on hand to score his 8th goal of the season. 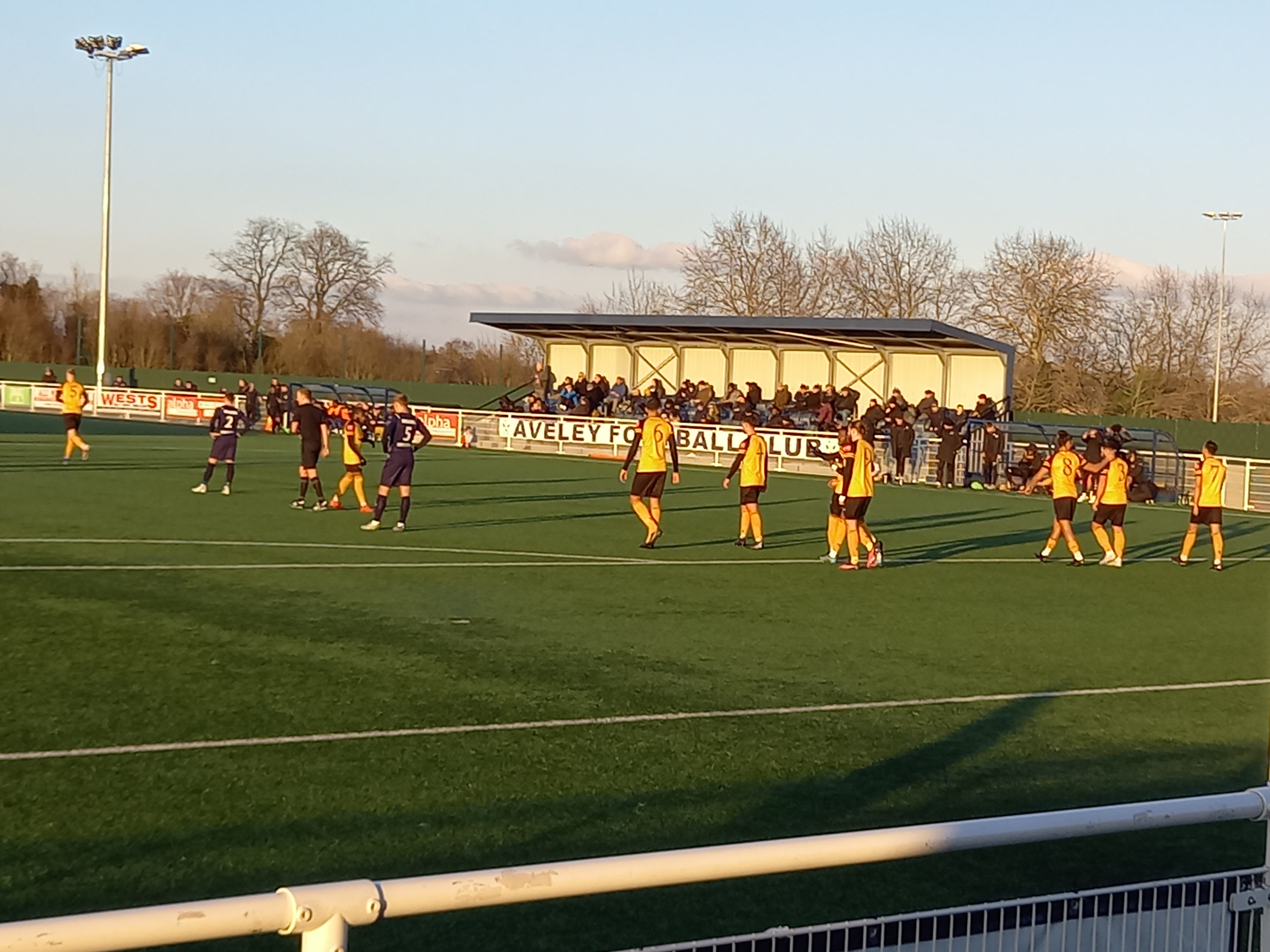 Before half time Aveley came close when a corner from Coker was cleared out to Jamie Dicks who fired a shot over the top.  Then for Cray from a corner down the right, Wood’s cross was headed out to Cook who volleyed over the bar.

Just on half time, Cray almost scored a second when Dan Bassett found Bamba down the left but his snap shot went wide.

The second half was mostly a stop-start affair with not a lot of flow but Cray displayed maturity to look towards some game management and all the team put in solid performances to look to preserve the lead.

Once again Cray had to make a change with Bamba going off to be replaced by Nyren Clunis after he required treatment for a knock after being brought down just outside the area.

Aveley came close to levelling from a corner down the right and Coker’s cross was headed wide by Ryan Scott.  Then from another corner the ball came to Coker out on the right and his hooked volley went wide.

The match was held up for a head injury to Aveley’s Jason Ring and in the 72nd minute Cray were indebted once again to Shaun Rowley who did very well to push away a shot from George Sykes who shortly after did well to hold a shot from distance from Ring. 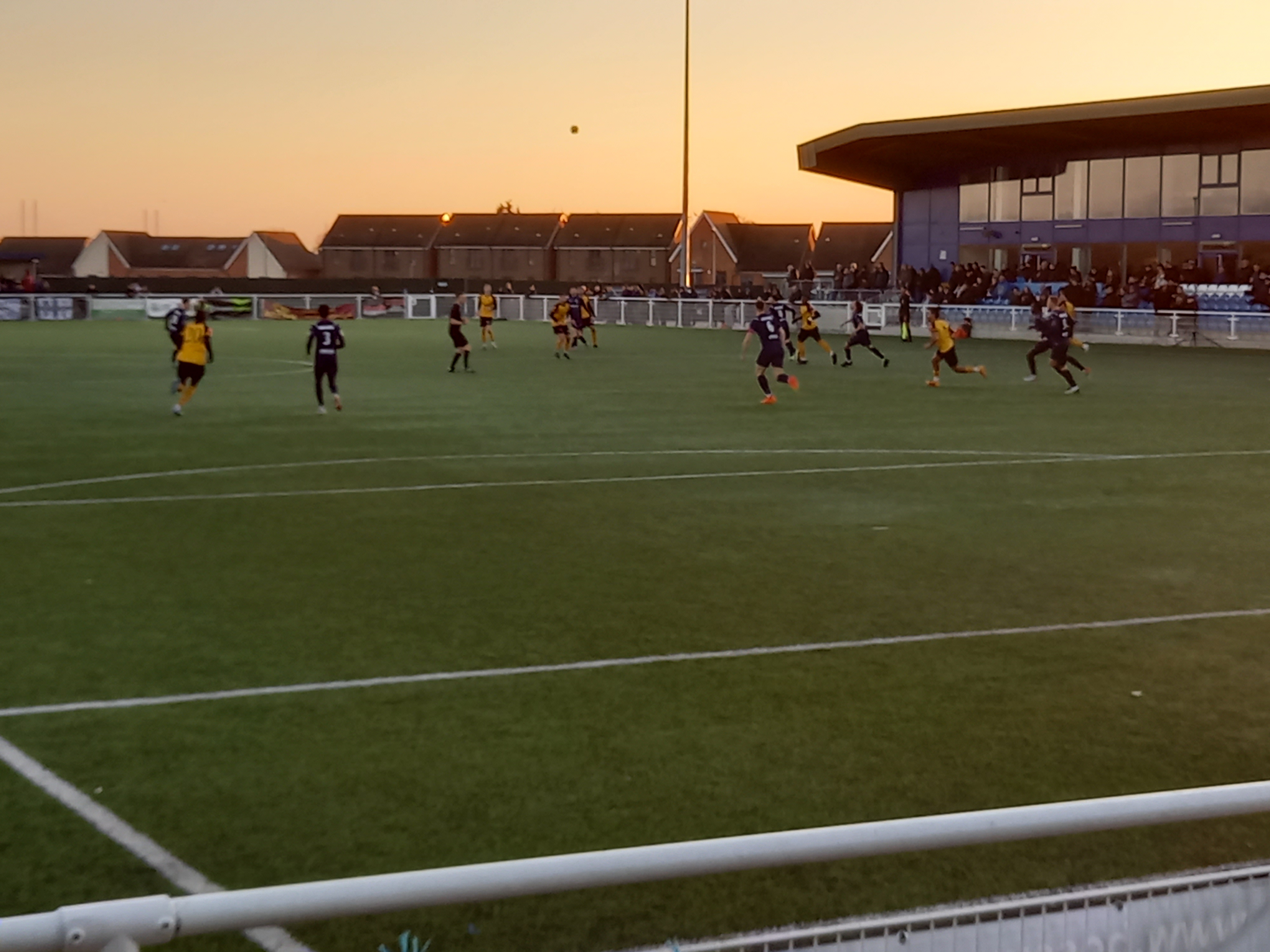 Cray did look to break out for a second and Dajon Golding found himself in a good position just outside the box but elected to pass to Derry.  Then Anthony Cook’s ball across just skimmed off Derry’s head and was claimed by North.

Prior to seven minutes of injury time a Wood corner to the far post was headed wide by Jones but Aveley did apply some fair pressure in the closing stages but once again the Wands knuckled down and withstood some blows.  Firstly, Manny Ogunrinde’s cross found Harry Gibbs who fired well over the top.

Then from a corner the ball came to Ryan Scott whose shot was blocked, then Jamie Dicks fired over the bar.  The last real chance came when down the left Ogunrinde’s cross was met by the head of substitute Temi Babaloa but was well held by Rowley.

In the end, Cray held on for a big three points against a side who have lost just two league games at home all season and are live promotion contenders.  Neil Smith’s side have had three very physical games against Canvey Island, Bishop’s Stortford and Aveley and have come out of those very well despite having setbacks with first half injuries in each game.  The resilience of the side has been there for all to see all season and as you come to the point of the season where points are needed to be picked up regardless of the attacking performance, this was a first class example of winning three points the hard way.

The win moved Cray back up to 2nd level on 46 points with Hornchurch although the Urchins have played four games less but behind the top two the table is quite congested with Horsham in 13th place just five points behind 4th placed Enfield Town who are four points behind Hornchurch and Cray Wanderers.

Cray now move on to a home game with in form Lewes next Saturday which promises to be a totally different type of match with more fluidity but will still be another big test of the Wands promotion credentials.