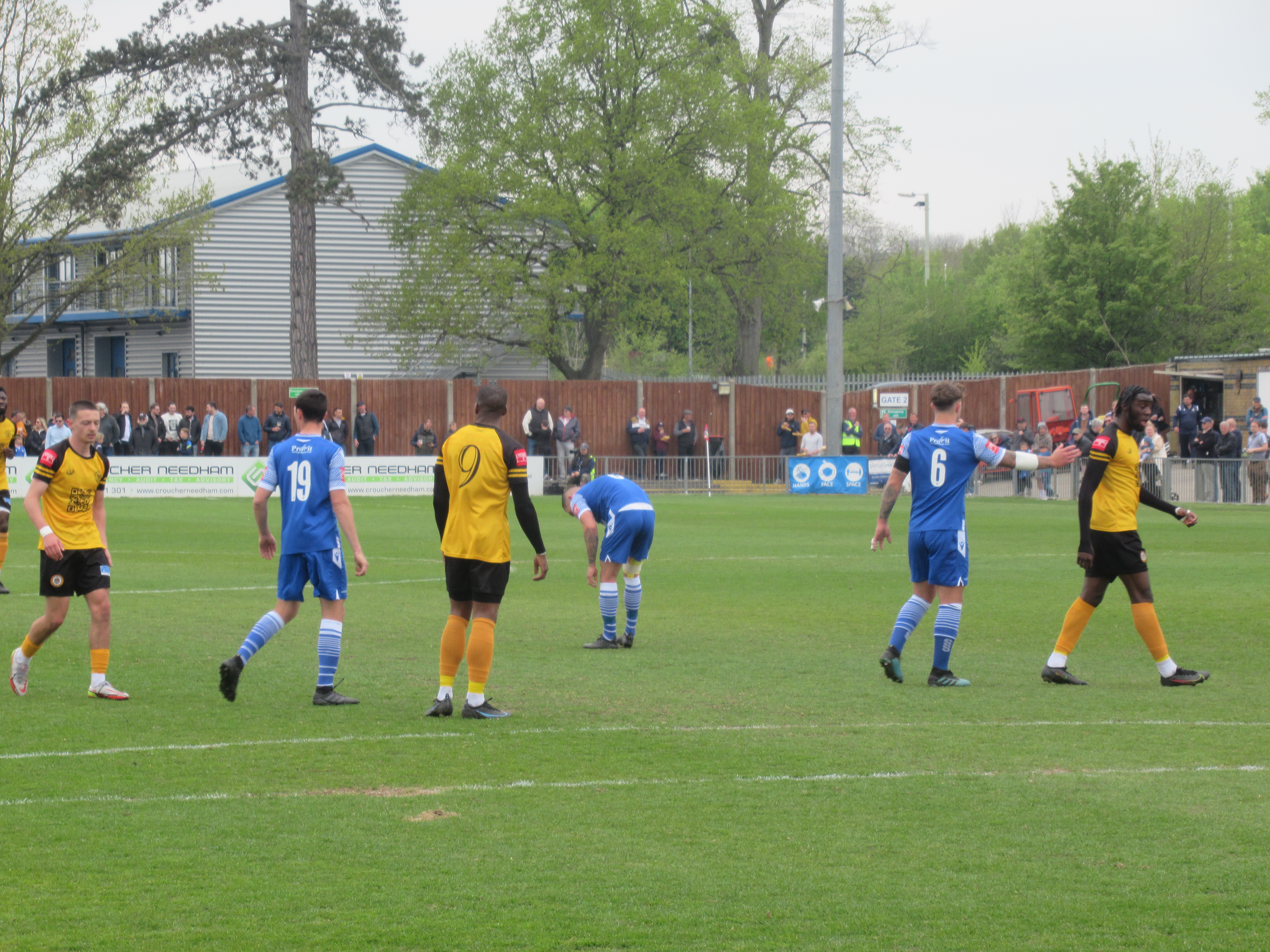 Cray Wanderers confirmed their place in the Isthmian Premier for the 2022-23 season after a gut-wrenching afternoon of drama and although Cray were beaten at playoffs bound Bishop’s Stortford, East Thurrock’s defeat to Horsham and the fact that Leatherhead had an inferior goal difference to Cray meant that both were on 36 points but Cray survived to live to fight another day.

Bishop’s Stortford were very impressive and needing only a point to confirm second place and home ground advantage throughout the playoffs and took the lead through Jonny Giles fine finish on 21 minutes.  Cray though were hanging in the game and levelled when Jamie Yila flicked home an Anthony Cook left wing corner.

The Blues though retook the lead on the stroke of half time with a Darren Foxley header from a Giles cross and five minutes into the second half Giles smashed home a terrific strike from 25 yards and from there the game was won and it was all about what was happening elsewhere for Cray.

It has been a rare luxury for Cray Wanderers this season but Neil Smith named an unchanged starting lineup for the third straight game and Wednesday night’s 4-1 win vs East Thurrock United was a huge result which ultimately proved decisive.  Steve Smith’s Bishop’s Stortford have been consistently good all season and on Easter Monday suffered their first defeat since January at Cheshunt who they meet at home on Wednesday evening in the playoff semi-final and made three changes with Sam Robbins, Ben Marlow and Ryan Charles coming in for Chris Harris, Jack Thomas and Johnville Renee. 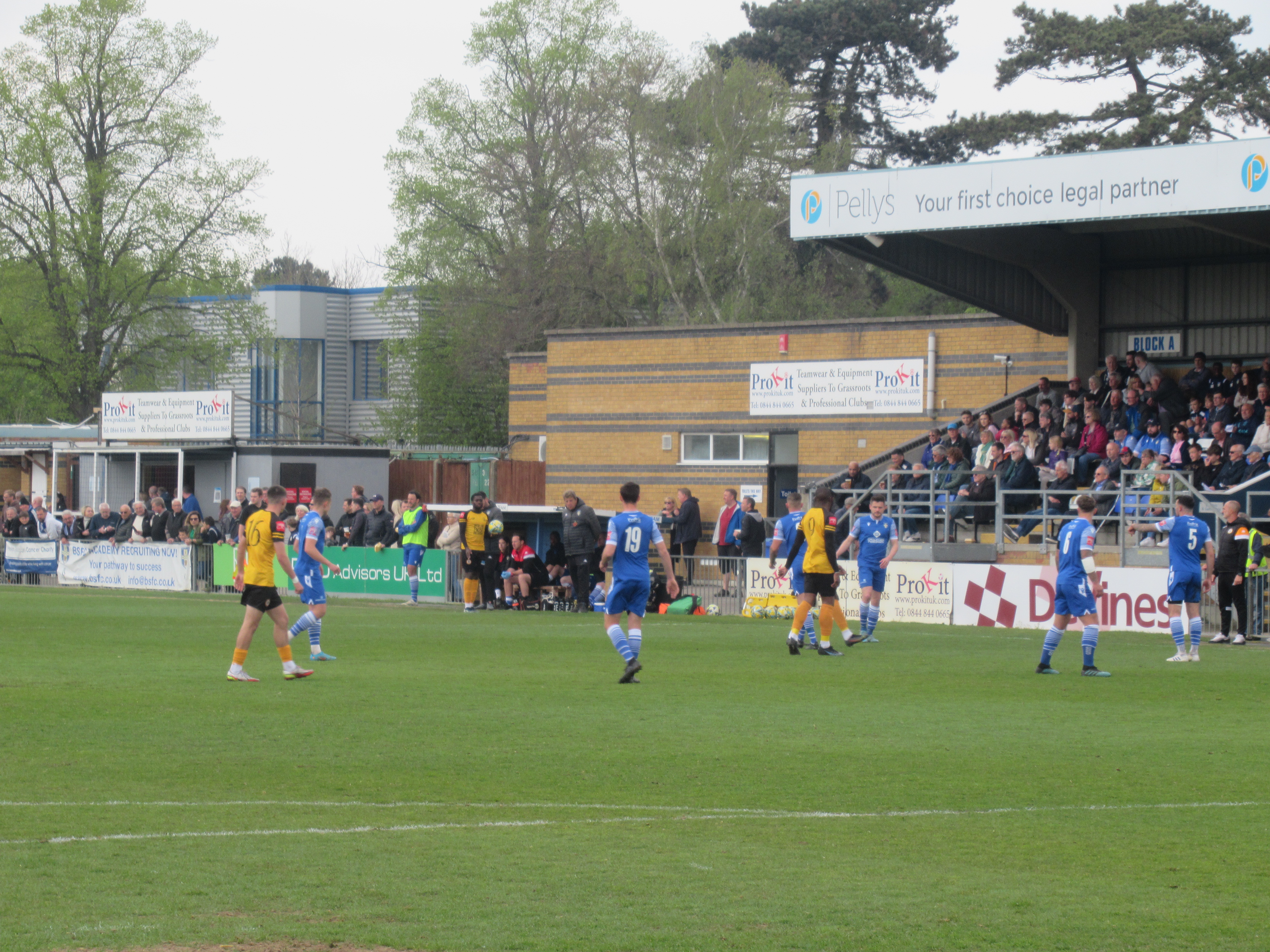 From the off Bishop’s Stortford settled the better and came close to scoring early on when from a free kick out on the right, Jonny Giles cross was headed over by William Cracknell.  For Cray, an in form Sam Wood fired just wide of the right post with a snap shot.

Then Nathan Boamah excelled once again with a fine save pushing round the left post a shot from Darren Foxley.  Shortly after Boamah was called into action again when he saved a shot from Ollie Peters following a right wing cross.

Cray though were very much still in the game and from a free kick, Wood’s cross was met by Chris Dickson who volleyed wide.

A goal was looking likely for the home side and duly arrived in the 21st minute when Giles found space just outside the area and placed an unerring shot wide of Boamah and into the bottom right corner.  At this stage things were looking dodgy for Cray as East Thurrock United and Kings Langley in the Southern League Premier South were both winning.  Shortly after Giles saw a shot blocked inside the area as Cray looked to get a foothold in the match.

However, in the 32nd minute Cray were back on level terms when from a corner won  down the left, Anthony Cook’s cross into the six yard box was met by Jamie Yila who reacted quickest to glance the ball into the net. 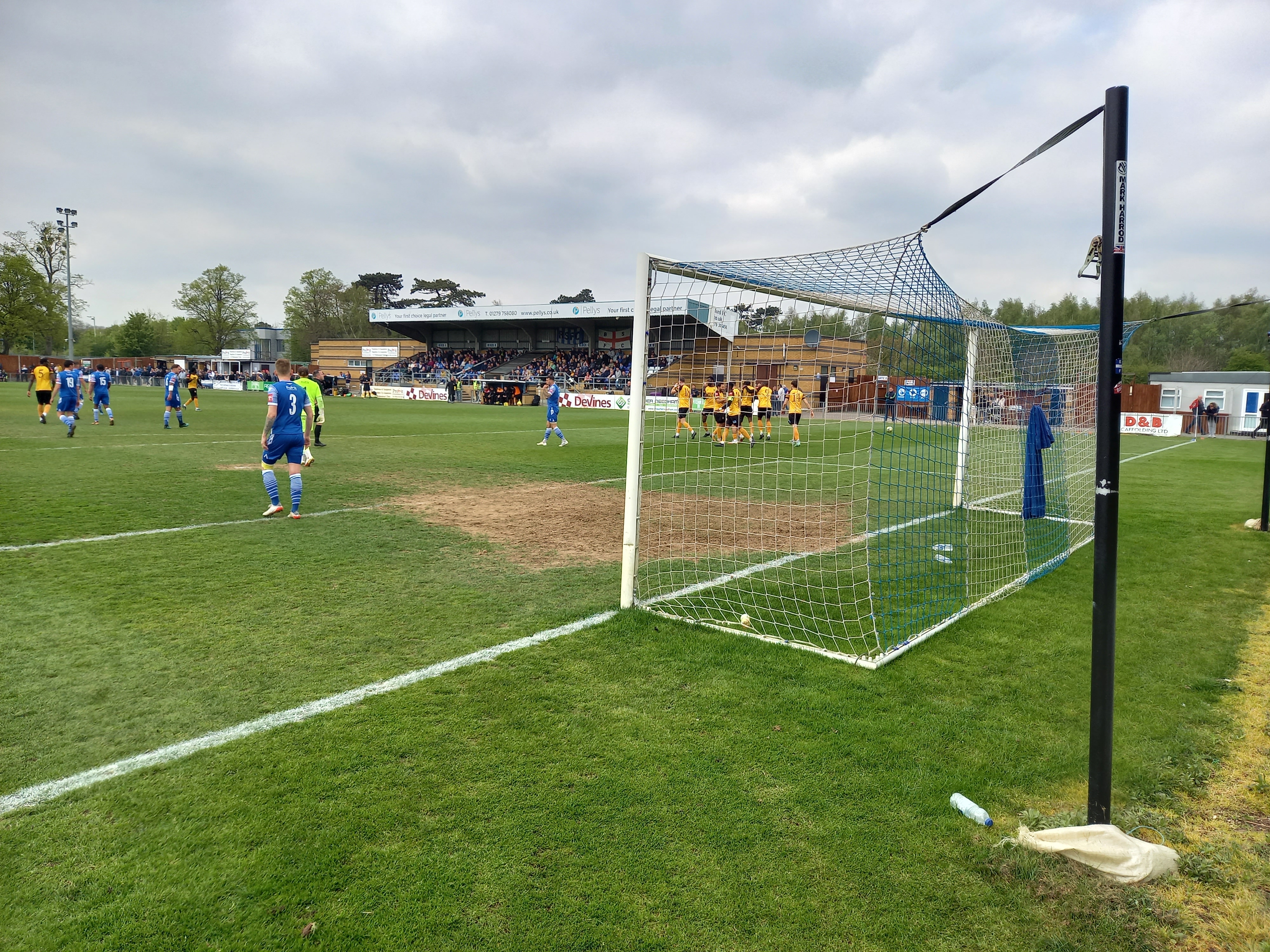 Bishop’s Stortford came close to going back in front when Giles fired just wide on the stretch while at the other end another corner from the right was flicked over the top by Ethan Kaiser.

The home side though ended the half strongly and first Ben Marlow turned and shot over the top and then Peters fired over from an Archie Jones cross.

It looked like Cray had done enough to go in at the break level but in one minute of added on time Bishop’s Stortford went back in front when down the right, Giles put over a fine cross towards the right post and Foxley reacted quickest to head the ball past Boamah and into the net. 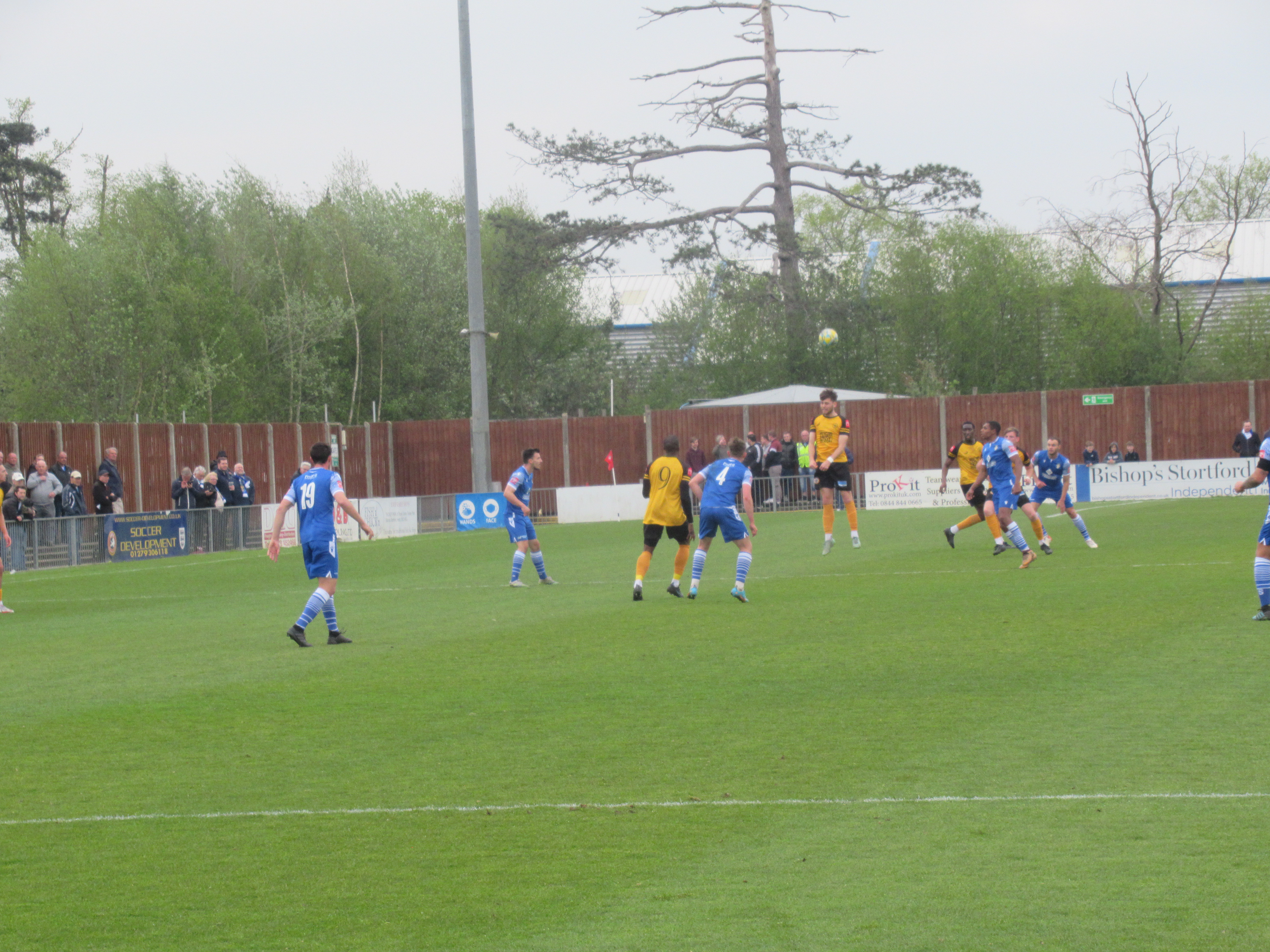 At the break news came through of a Horsham equaliser at East Thurrock and Cray were just about safe but there was still a tough second half to come.

Cray began the second half well although Marlow fired over for the home side but Cray did win a couple of corners looking to get back on terms.

From the second of those corners the ball was claimed by keeper Jack Giddens and the ball went up the other end to the impressive Giles who found space and hit an unstoppable shot which flew into the top right corner to make it 3-1 and a tough ask for Cray from this stage.

From here attention was starting to turn elsewhere and two goals just after the hour made it 2-2 at East Thurrock but still enough at this stage for Cray to stay up. 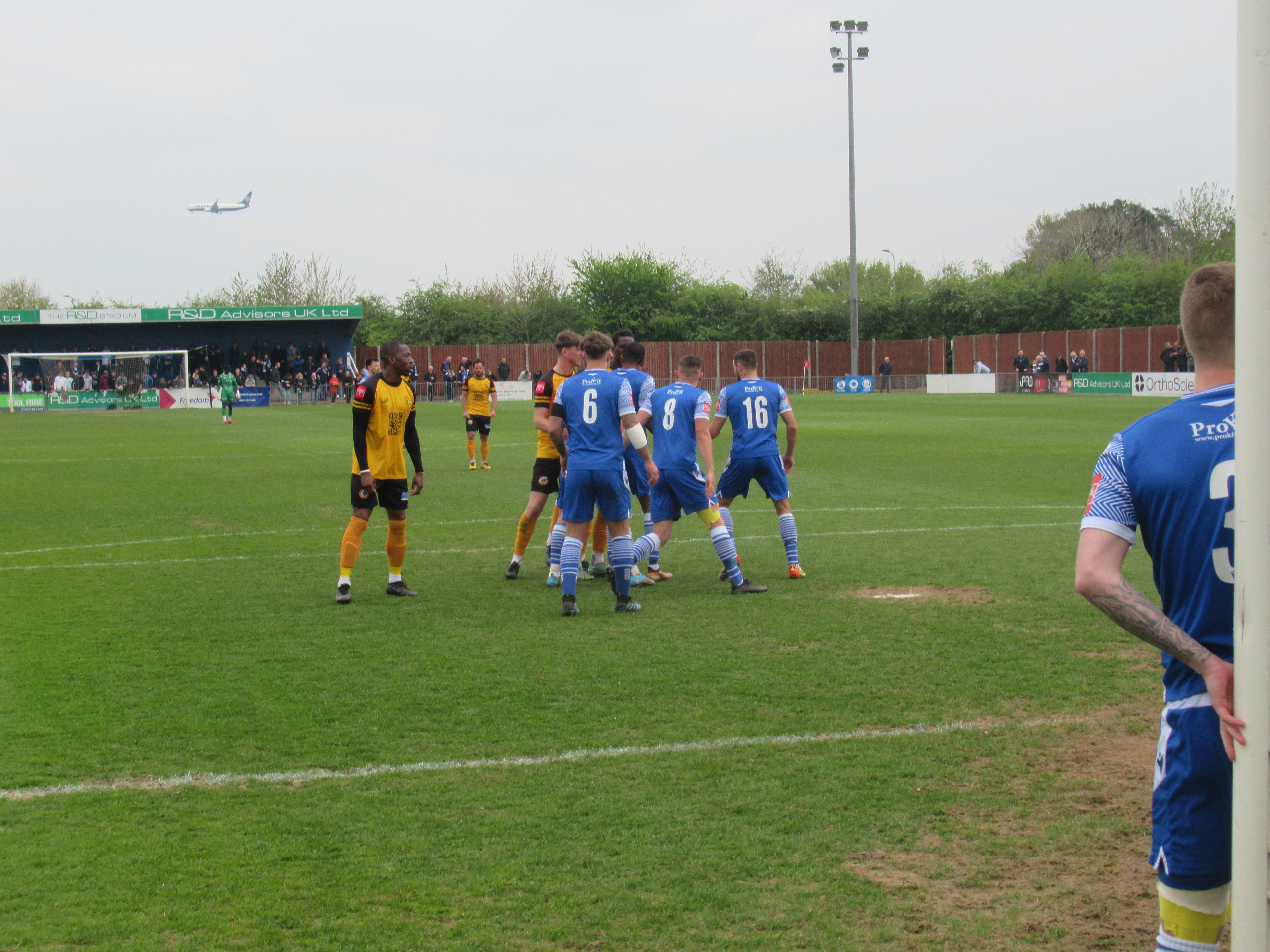 For the Wands, Dickson with a shot on the turn saw his shot held by Giddens while at the other end Foxley came close to a second goal when set up by Jones but was denied by the legs of Boamah.

The intensity of the game was now gone with substitutions and Cray trying to get back into it and Richie Danquah glanced a Wood corner off target was a rare chance in the second half. 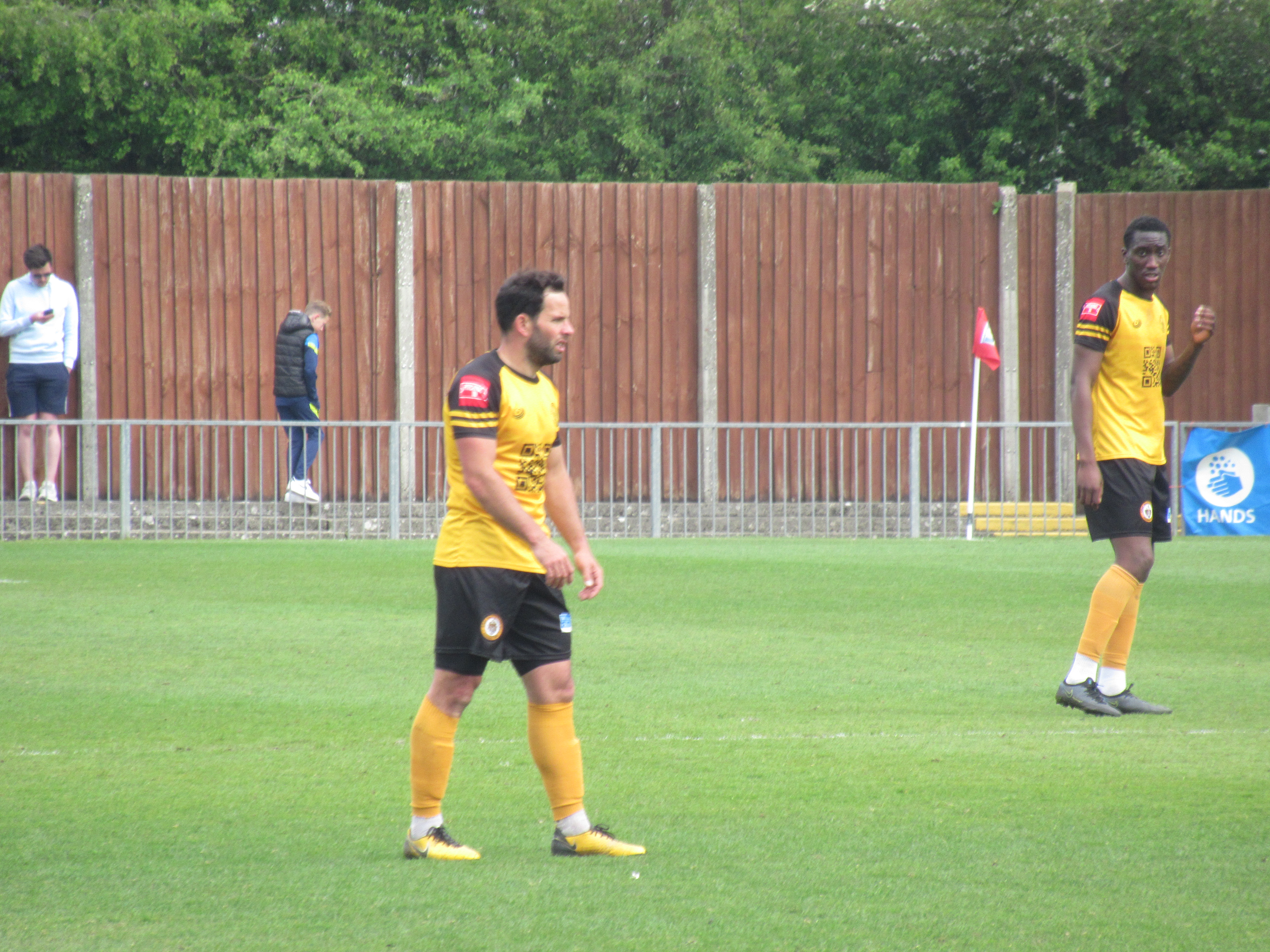 Cray had a bit more possession in the latter stages and the closest they came was through substitute Luca Albon who down the right cut inside and his shot went fractionally wide of the left post.

For Bishop’s Stortford, Foxley glanced a free kick wide but they had done more than enough to guarantee second place in the table and saw out the game well.

The drama in the last few minutes for the Wands fans was reserved for East Thurrock and news had filtered through of a 93rd minute goal for Horsham which now moved the Rocks into the bottom two and pushed up Leatherhead who were beating Potters Bar and moving on to 36 points with Cray. Cray though had a better goal difference and there were no more goals elsewhere and the final whistle was greeted with a mixture of relief and joy as after a difficult season the Wands preserved their Isthmian Premier league status.  In the end the game seemed to fly past in a flash and was quickly forgotten upon the journey home but credit to the players and management for managing to get the Wands over the line and it is hoped that next season will see the club free of such tension on the final day or hopefully further up the table. 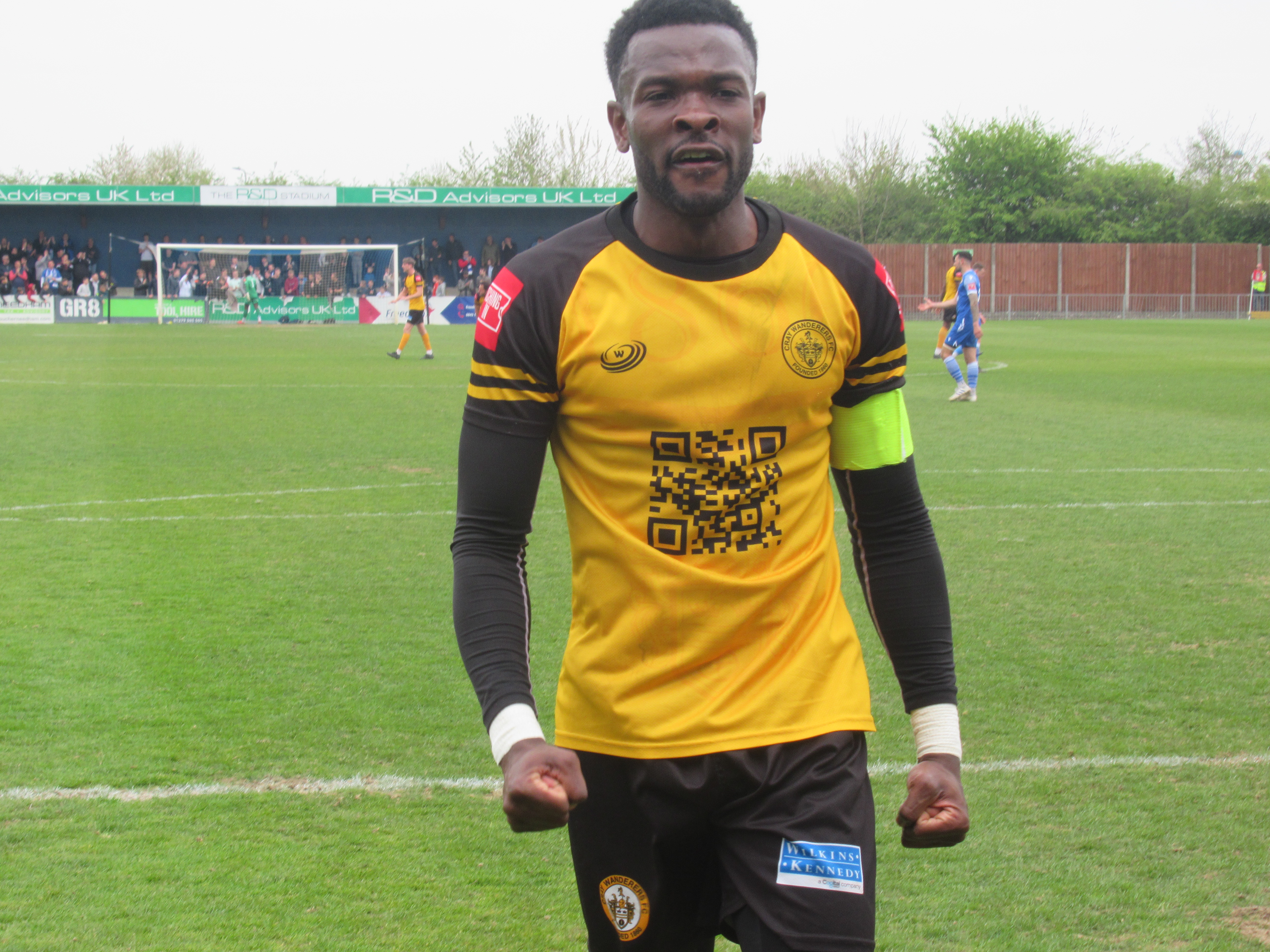