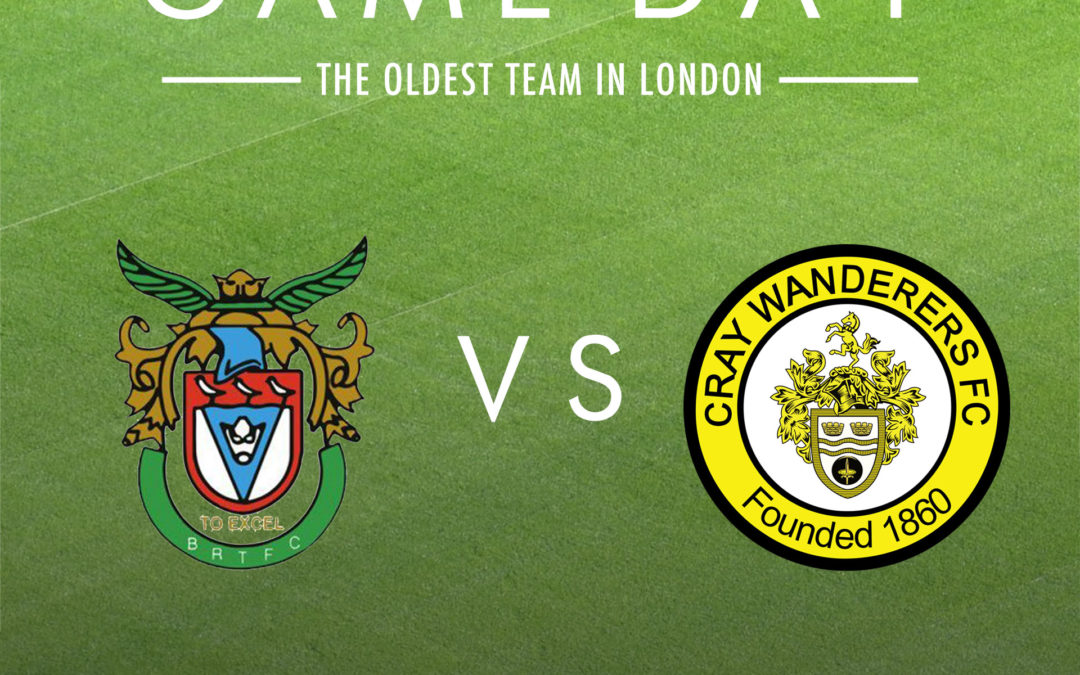 Cray Wanderers are on their travels on Saturday for the first of three successive seaside town away games as Cray head to Bognor Regis Town for the first time since September 2013.  Kick off at Nyewood Lane is 3pm.

Cray head to the West Sussex coast in good heart after a high quality performance last Saturday against a very decent Potters Bar Town which delivered a 4-0 win and moved Tony Russell’s side up to 6th place in the Isthmian Premier League table. 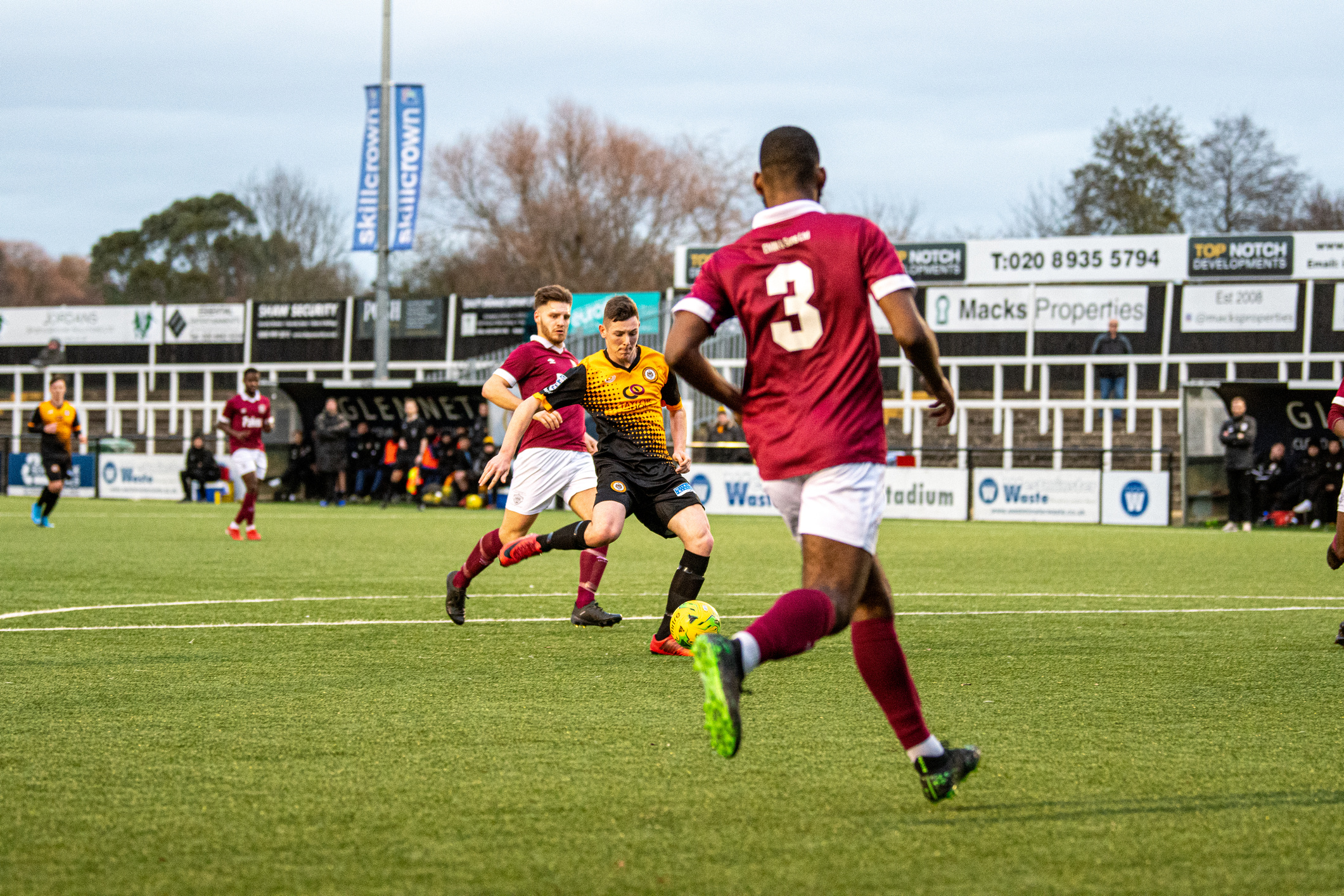 Four different goal scorers helped Cray on their way with Andre Coker, Lee Lewis, Joe Taylor and Karl Dent all before the hour set up the victory. Coupled by a superb display from Bradley Pritchard and a strong rearguard performance the Wands bounced back from the defeat at Carshalton in great style. 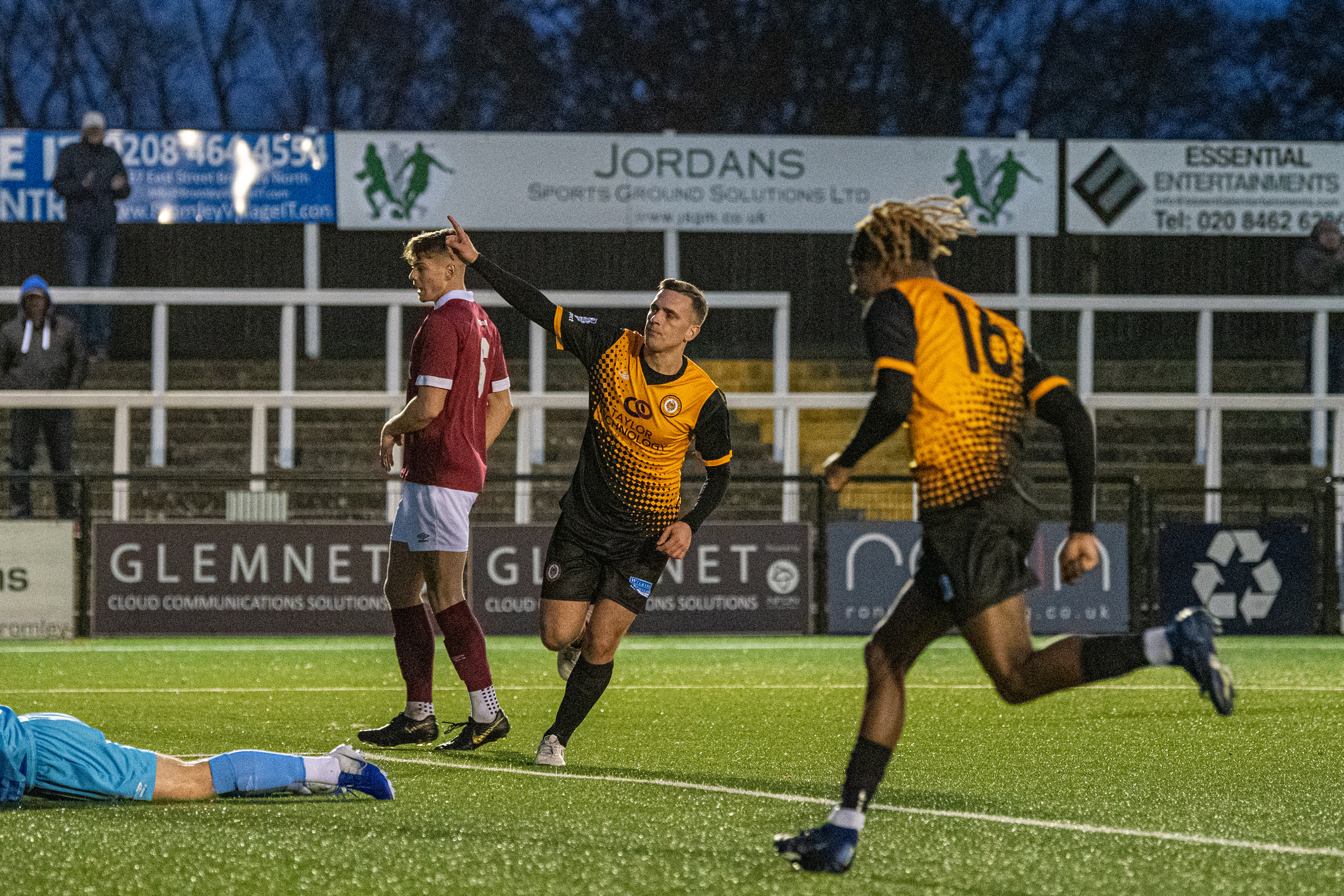 A piece of good news following the game was that Jerome Federico who was stretchered off on Saturday is that he could be part of the matchday squad against Bognor Regis after twisting his knee and not a break as first feared at the time.  Otherwise Barney Williams could also be on the bench following his eye injury at Carshalton and Ben Mundele has a groin problem following Saturday but travel to Bognor in good heart and in decent form with just one defeat in the last nine league games and just four points behind second placed Worthing. 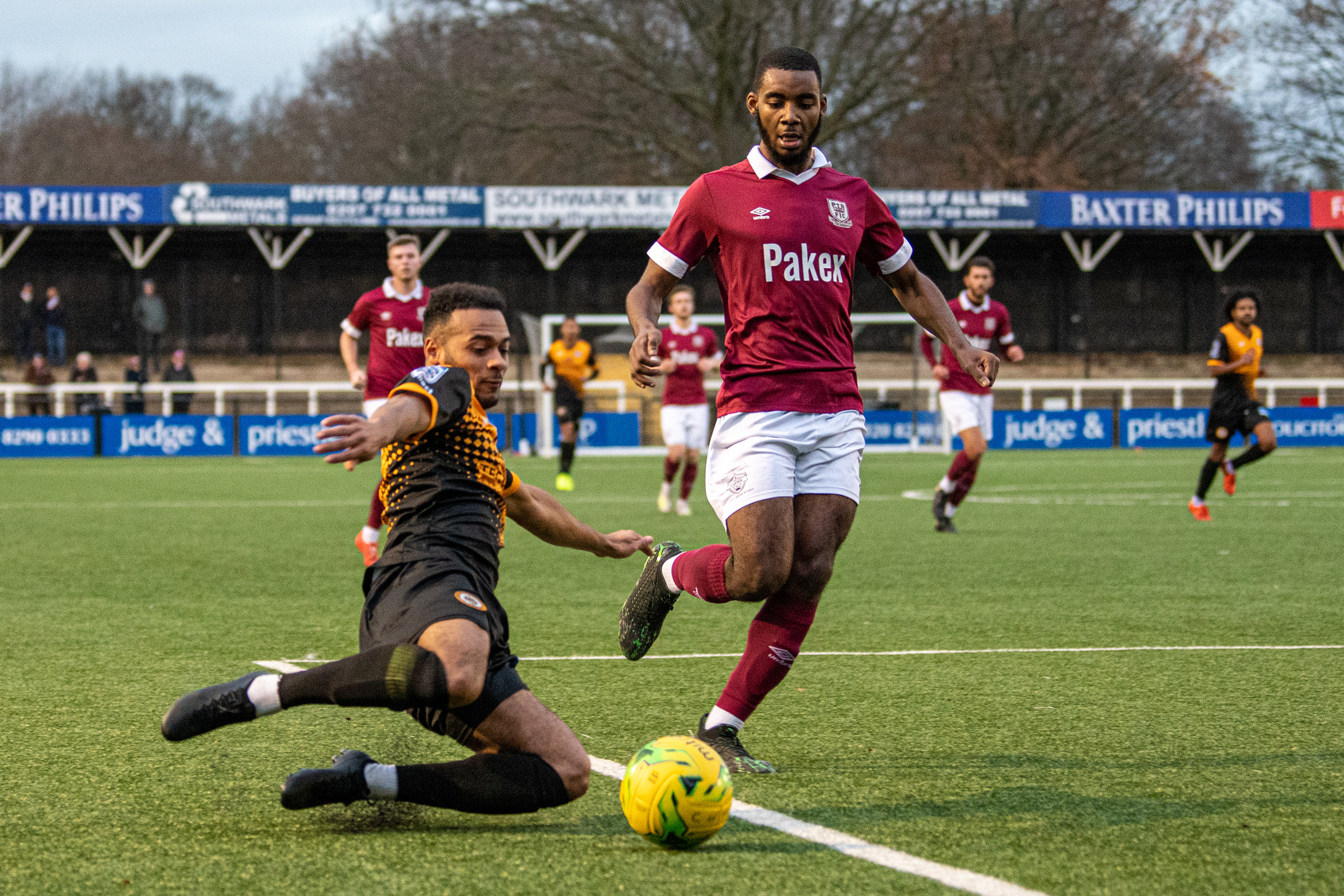 Certainly Cray will be tested on Saturday against a very strong Bognor Regis Town side who before last Saturday’s 0-1 defeat at Carshalton had gone seven unbeaten in the league and after a slow start to the season had steadily climbed the league and have lost only two of their last 11 games.  Bognor Regis are 9th in the table with 29 points.  Since Saturday, Bognor Regis advanced in the Sussex County Cup, a competition they won last season beating Horsham YMCA 3-0 at Nyewood Lane on Tuesday with goals from Daniel Smith (2) and Joe Cook.

Bognor are team managed by Jack Pearce who has a very long 50 year association with the club in a myriad of roles.  Football affairs are handled by experienced Bradford City and Burnley striker Robbie Blake.  Last season the Rocks finished in 14th place after returning to the Premier after one season in the National South.

Bognor Regis’ home form has seen wins against Haringey Borough (2-0), Leatherhead (5-1), Merstham (2-1) and Enfield Town (4-1). They drew with Horsham (1-1) and were beaten by Carshalton Athletic (0-2), Cheshunt (1-2) and Potters Bar Town (0-4).  Away from home Bognor Regis have been in good form and won at Wingate & Finchley (5-0), Folkestone Invicta (2-1), Kingstonian (1-0), Bowers & Pitsea (2-1) and Margate (6-1). They picked up a point at Hornchurch and were beaten at Bishop’s Stortford, Worthing, East Thurrock United and Carshalton.  Leading scorer is Daniel Smith with 14 goals. In the cups, Bognor reached the 2nd Qualifying Round of the FA Cup after beating Sittingbourne but were beaten at Dulwich Hamlet.  In the FA Trophy Bognor Regis advanced to the 3rd Qualifying Round beating Uxbridge and East Thurrock United before losing at Tonbridge Angels.

Matches between the two sides haven’t been frequent down the years with just the six league meetings, all in the Isthmian Premier.  The Wands have just the one victory, 2-0 at Bognor Regis in February 2013. Bognor have won 4 times and one match has been drawn.  The last meeting was at Hayes Lane in January 2014 with Bognor winning 2-1 with Paul Vines scoring for Cray. 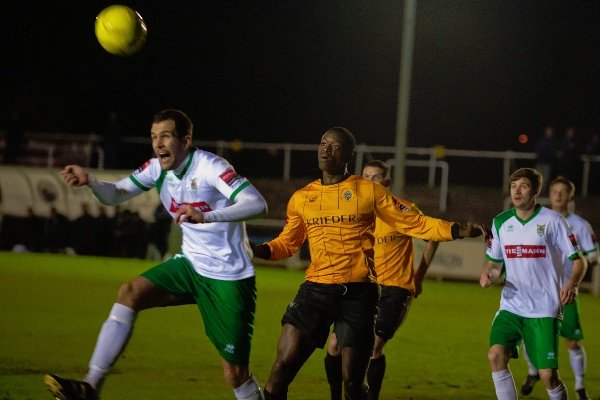 Bognor Regis Town were formed in 1883 and spent their early years in the West Sussex and then Brighton & Hove District leagues..They then joined the Sussex County League in 1927 and stayed there until the 1970’s.  They won the Division One Championship in 1972-73 and were promoted to the Southern League and then in 1981 moved to Division Three of the Isthmian League and were promoted straight away. They were promoted to the Premier in 2002-03 and two years later were moved to the National South where they stayed until 2008-09 and were relegated to the Isthmian South in 2009-10 after meeting Cray Wanderers for the first time.  They missed out on goal difference in 2010-11 for promotion from the South Division and lost in the playoffs to Dulwich Hamlet. In 2011-12 they gained promotion via the playoffs beating Godalming and Dulwich Hamlet to go up to the Premier.  They were consistent promotion challengers and in 2013-14 finished 3rd but lost in the playoffs to Lowestoft Town. In 2015-16 they came 2nd but lost to Dulwich Hamlet and also reached the Semi-Finals of the FA Trophy. In 2016-17 they came 2nd again but this time beat Wingate & Finchley and Dulwich Hamlet to earn promotion to the National South once again. In 2017-18 they were relegated and last season consolidated finishing 14th but won the Sussex Senior Cup.

This will be a tough match and one of the great away trips of the season and should be a game to savour as Cray head to the coast for the next three away games with Worthing and Margate to follow but hopefully the rain stays away for the weekend.. 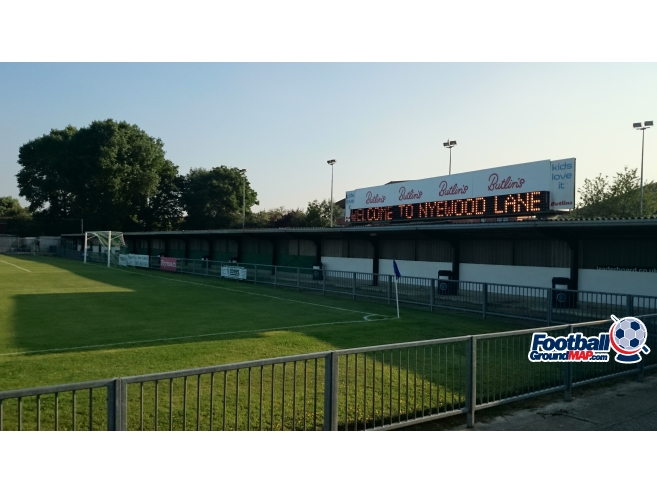 Follow the A27 around Chichester towards Brighton and Worthing. On reaching the Bognor Road Roundabout take the third exit onto the A259 towards Bognor Regis. Go straight across the next roundabout and at the second roundabout that you reach (signposted Littlehampton A259) take the third exit onto the B2299 towards Bersted. At the next double mini roundabout with the Royal Oak on the left go straight on towards Bognor Regis. After a mile turn right (where there is a Thai Restaurant and a Protek Shop on your left) onto Hawthorn Road towards Aldwick. You will pass the Wheatsheaf pub on your left and then just before the cricket pitch, turn left into Nyewood Lane. The main entrance to the ground is down on the right.

There is limited parking within the ground for players, officials and disabled visitors.

There is ample on-street parking in Nyewood Lane and surrounding roads. There is also free parking available within the Bognor Sports Club, via it’s entrance in Hawthorn Road. There is a turnstile giving access into the ground from this car park and you will also find a very attractive bar within the Sports Club you can use.

If coming by train, either take a taxi (approx. cost £4.50) or if walking, turn right out of station and follow these directions, Walk along Linden Road until you reach Parklands Avenue, just after Parklands Avenue is a footpath on your left (opposite Town Cross Avenue) that if followed leads all the way to the entrance of the football club. 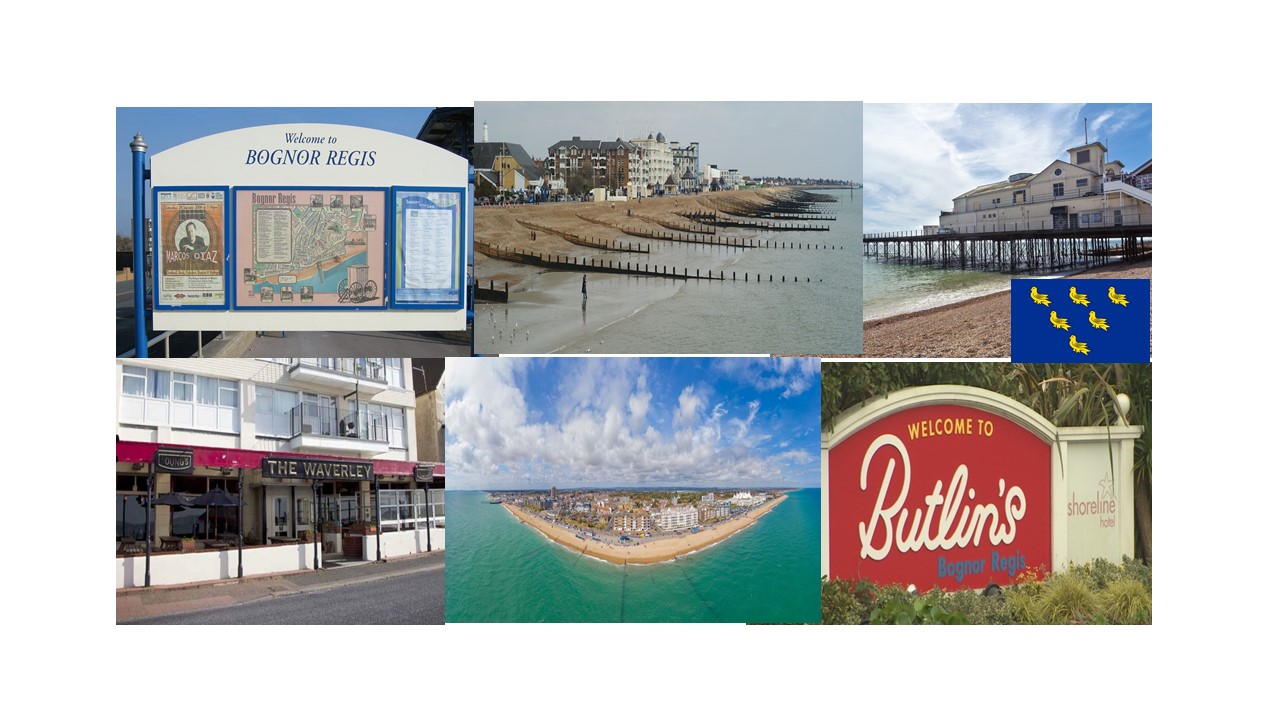 There is a good sized Social Club located inside the ground, which welcomes visiting fans. Nearby on Hawthorn Road is the Bognor Sports Club, which also has a bar that is open on matchdays. The Wheatsheaf pub, also on Hawthorn Road, is around a five minute walk away. This pub also serves food and has Sky Sports/BT Sport. 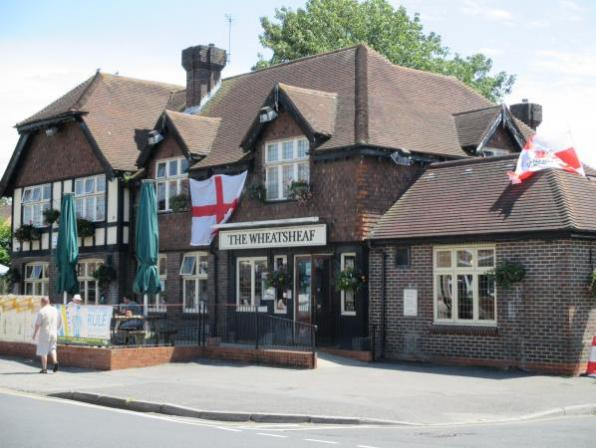 If you proceed down Nyewood Lane then the sea front is a half a mile or ten minute walk away. If you continue to the bottom of Nyewood Lane then you will reach the sea front, where on the left you will find the Waverley Pub. The centre of town is around a 15 minute walk away where there are plenty of pubs to be found including the Hatters, which is located on Queensway. This pub is listed in the CAMRA Good Beer Guide.  If you are looking for a good chippie then the Linden Fisheries on Linden Road especially if you are coming in by train is five star rated as is the Victoria Fish and Chips on Station Road.

Bognor Regis is the first of three successive seaside trips with Worthing and Margate to come although will be a touch chillier than we might like.   Bognor Regis is a popular holiday resort in West Sussex which has housed the Butlins Holiday village since the 1930’s and was bestowed the “Regis” suffix after King George V went to recuperate in Bognor following lung surgery and as a thanks gave the town royal status.  Other areas nearby are Littlehampton and Selsey although you might find it a bit cold for too much travelling but one of the away trips that is looked forward to when the fixtures are announced.