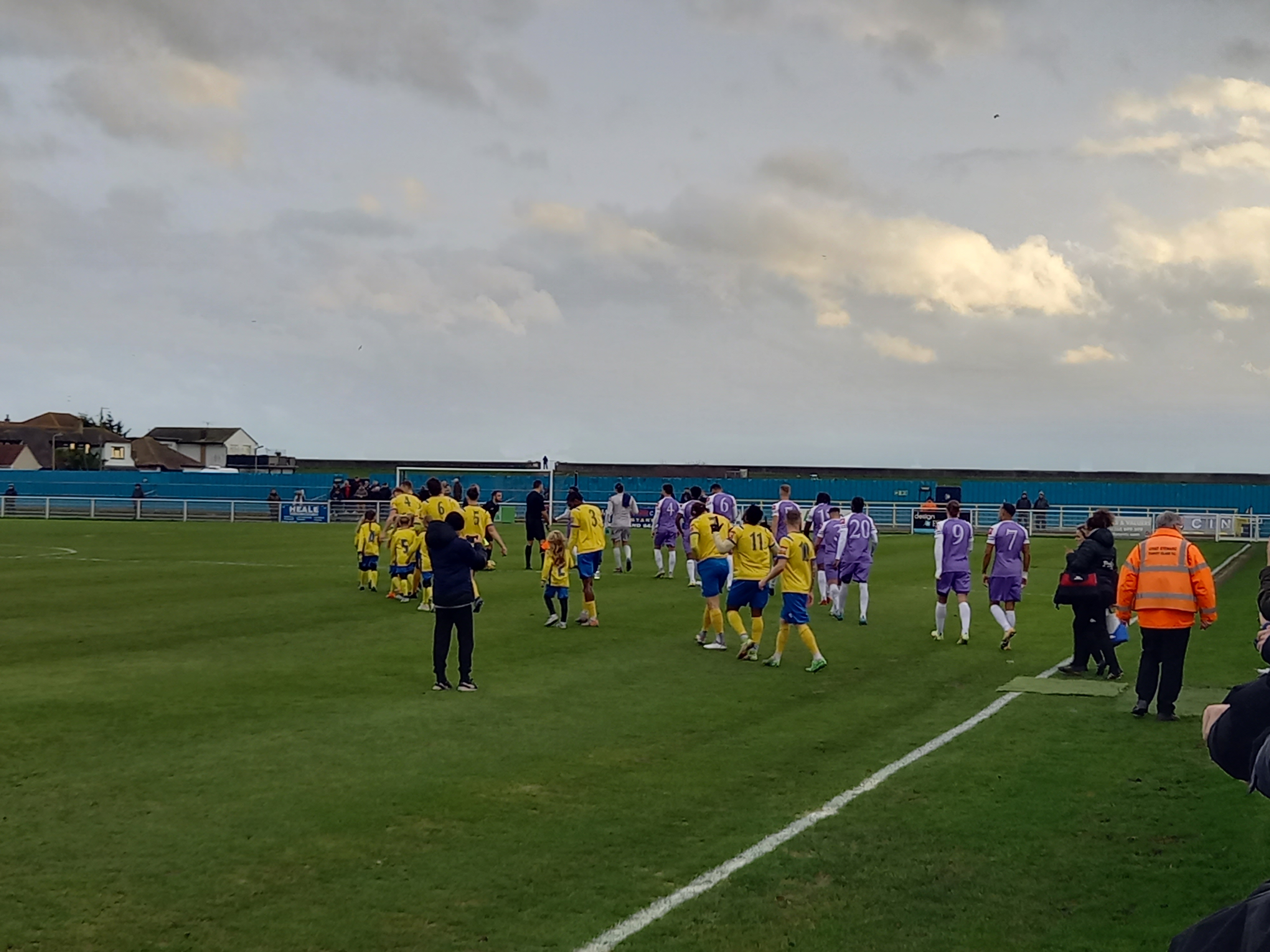 Cray Wanderers remain in 2nd place in the Isthmian Premier league table after a hard fought point at Canvey Island made it nine league games without defeat on a very windy afternoon.

In a game where quality football was difficult due to the blustery conditions it was the home side who edged ahead in the 21st minute when Conor Hubble’s corner from the left towards the far post went into the net via Jalen Jones with Elliott Johnson looking to get a touch.

Cray hung in the game despite the wind being against them in the first half and ten minutes after half time levelled when an Anthony Cook free kick down the left towards the far post was headed in by Yahaya Bamba for his first league goal for the club.  Despite Dan Bassett coming close with a shot fractionally wide and Bradley Sach heading wide late on neither side could grab a winner and in the end a draw was a fair result.

Both teams began 2023 with wins on Monday with Cray winning 3-0 vs Herne Bay at Hayes Lane and from the side which started the game there were a couple of changes with Sinn’Kaye Christie, Sam Skeffington and Anthony Cook coming in for the injured Jephte Tanga, Harrison Sodje who had been recalled by Leyton Orient and Nyren Clunis.

Canvey Island arrested a two game losing run by winning 1-0 at Aveley and made one change with Mason Hall coming in for Jamie Salmon.

The game was always going to be difficult with the gusty wind throughout the whole game which meant it was hard to get the ball down to play.

In form Dan Bassett tried his luck and to judge the wind with a shot from distance which sailed over the bar but both sides early struggled unsurprisingly to combat the conditions. 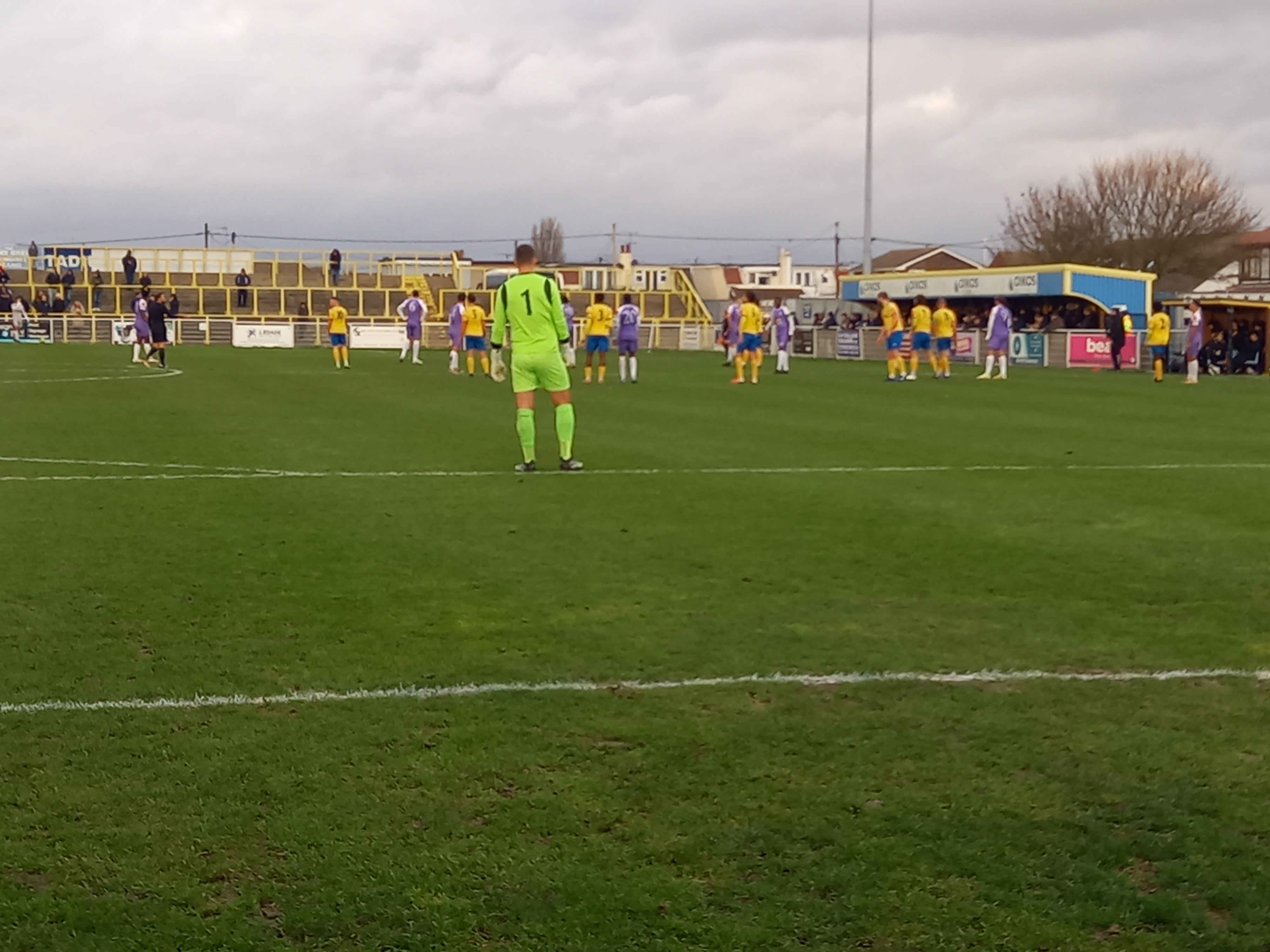 Canvey began to pose a threat and from a corner down the left the ball came to Joe Paxman and his effort was charged down and blocked for a corner.

After a brace of corner kicks, Canvey went ahead in the 21st minute when Conor Hubble’s corner into the six yard box with Elliott Johnson looking to get a touch but the ball went into the net off Jalen Jones.

There was a blow for Cray when David Ijaha had to come off with an injury three minutes later and was replaced by Nyren Clunis.

Canvey with the wind in their favour couldn’t really capitalise on the lead although another Hubble corner clipped the bar and Evans Kouassi saw a shot from the right edge of the area held by Shaun Rowley.

For Cray, Bassett saw a shot blocked by Tobi Tinubu while for Canvey a Kouassi ball across was flicked off target by Bradley Sach.

Before half time, Sam Skeffington set up Anthony Cook for a shot from distance which was well held by Bobby Mason.  Then just on the stroke of the interval a shot from outside the area by Elliott Ronto was saved by Rowley.

Canvey who made a change at half time with Jamie Salmon replacing Elliott Johnson began the second half brightly and could have put daylight between the teams and Charlie Edwards and Kouassi combined and his ball across was turned over by Paxman.

In the 50th minute, Cray were indebted to the excellence of Rowley who made an excellent save to turn a strike from Kouassi round the left post for a corner.  Then Rowley did well to deny Kouassi who looked to advance on goal and the tackle from the Wands keeper saw the ball come back off Kouassi and behind for a goal kick.

If Cray were to get back into the game it was felt the best chance was from a set piece and the Wands won a free kick down the left close to the touchline and Cook’s ball into the box towards the far post was met with a glancing header by Yahaya Bamba and into the net for his second goal of the season and his first in the league. 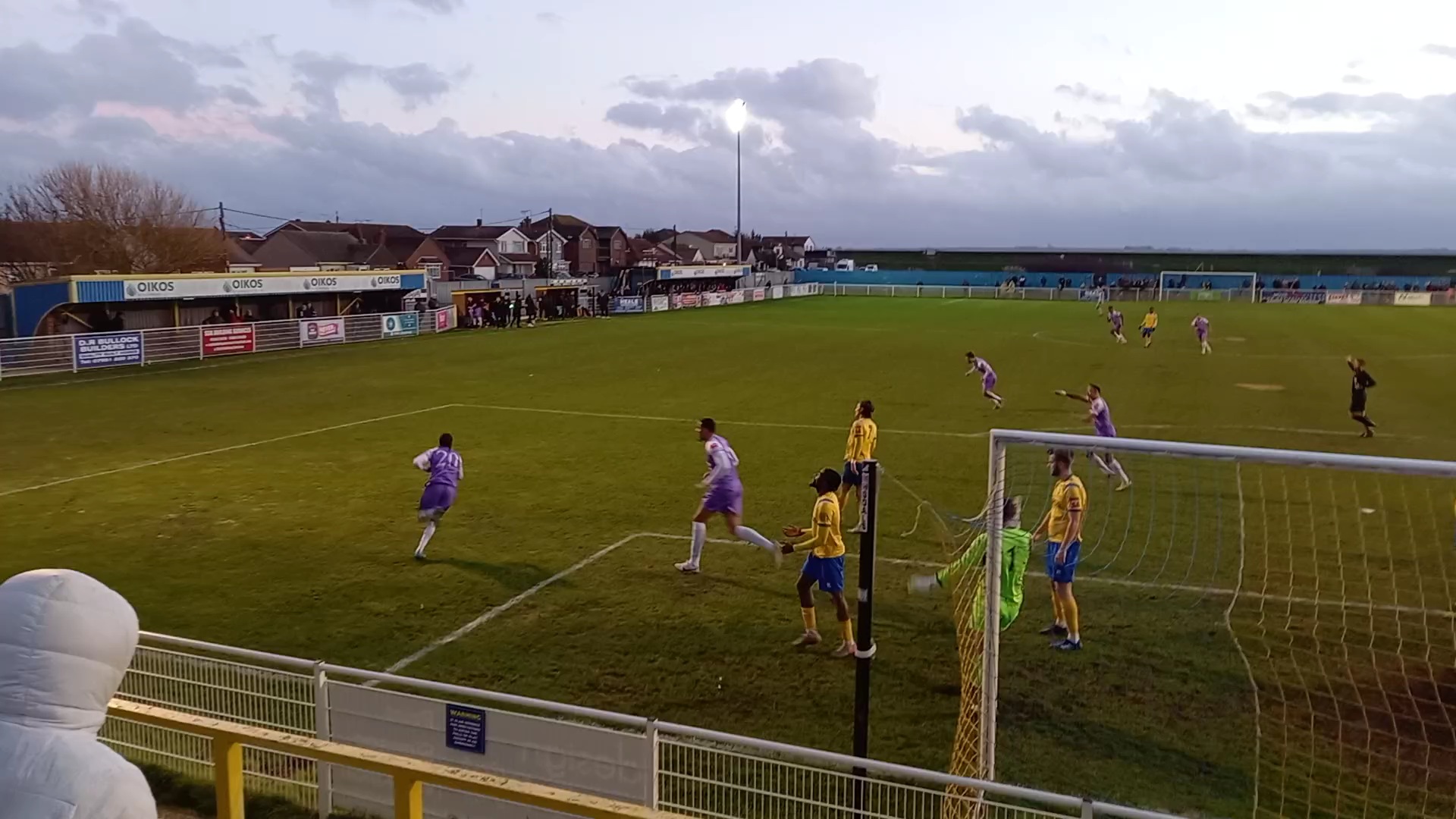 After that lively start to the second half the game got a bit bogged down once again and was becoming more of a maul than a match with the wind getting stronger.

Cray did come close to going in front when Bassett was unlucky when he cut inside to fire a shot just a lick of paint past the right post and probably the closest Cray came to a win.

Canvey did look to get some balls across the box but Cray dealt with these well with Jones and Matt Weaire at the back having solid games.

Towards the end there was more of a threat from Canvey and Tinibu couldn’t keep his shot down and sailed over the top.

Then from a cross down the left from Ashley Nzala was glanced wide by Bradley Sach.  Then a corner right at the end from Hubble was cleared away and in the end the match finished in a draw.

Again, Cray had to show their resilience by coming from behind and also had one or two injury issues during the game and without the regular full backs did well to get a point out of a notoriously difficult ground to get a result.

Cray remain 2nd in the table on 43 points, three points behind Hornchurch who won at Hasting United while 3rd placed Bishop’s Stortford were beaten at home by Lewes and are the Wands next opponents at Hayes Lane on Sunday afternoon.  Canvey remain 6th and definitely a viable playoff contender in the final months of the season.

The Wands though remain in good form, just one defeat in the last 16 league games and Neil Smith’s side now face tough tests against Bishop’s Stortford, Aveley and Lewes but can go in to these with supreme confidence.