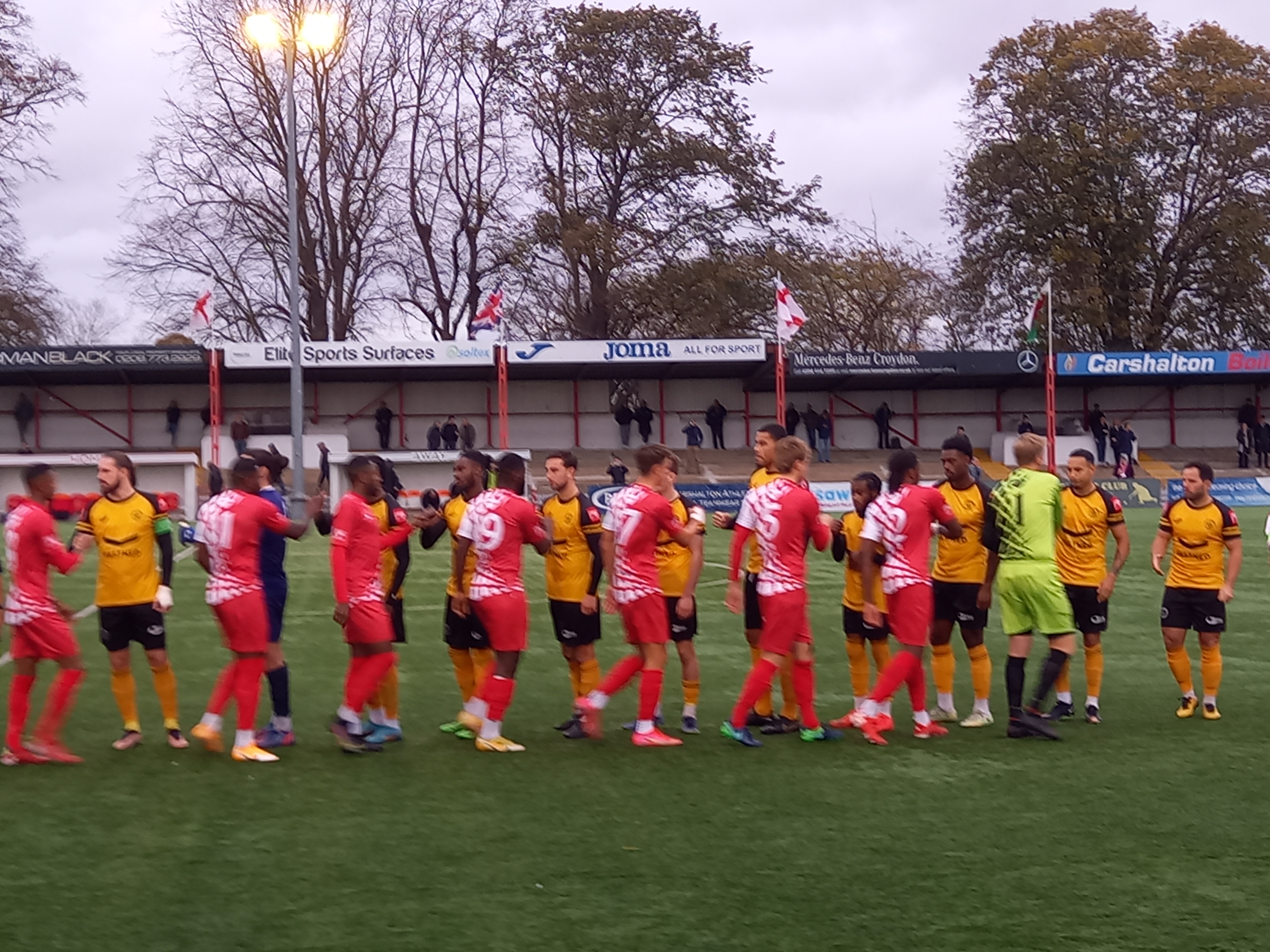 Cray Wanderers made it five league games unbeaten away from home after picking a point from an eighth draw of the season at Carshalton Athletic.

After a fairly cagey opening, Cray had the better of the first half and led at the break when ex-Robin Dan Bassett fired into the net following a left wing cross from Harrison Sodje a minute before half time.  Carshalton fought back in the second half and levelled twenty minutes from time when Calvin Ekpiteta converted a ball crossed from the left byline.  Despite late pressure from the home side the match finished in a draw.  Cray stay 9th in the table on 26 points, five outside the playoff places.

Neil Smith’s side had shown great character to come back from 0-2 down to draw at Horsham on Tuesday night and with Kellen Fisher, Mitch Chapman and Anthony Cook out suspended and David Ijaha and Freddie Carter injured there was a debut for loanee signing, Jephte Tanga as right back and also on the bench, centre half Tyreece Heslop was another late Friday signing.  Tanga came in for Fisher and Sam Wood for Cook.

Carshalton came into the game in 7th place and had been on a decent run of home form and from the side which drew at Canvey Island last Saturday, Kurtis Cumberbatch came in for suspended top scorer Tom Beere.

On a grey afternoon the game took a little while to get going with two good defences on top.  Cray were a little unlucky early on when Yahaya Bamba down the right put over a great, inviting cross which fizzed across the box with no-one able to get a touch to the ball.

Carshalton were rather direct and had plenty of the ball but the superb centre-back pairing of Jalen Jones and Sinn’kaye Christie kept Shaun Rowley well protected. Tanga had a fine debut and won tackles and got forward down the right and impressed the travelling Wands fans.

The nearest Carshalton came in the first half was from a free kick from Cumberbatch which Christie flicked past his own post for a corner.

Cray came close to scoring in the 24th minute when Tom Derry did well to win the ball on the ground and found Wood down the left who set up Ben Krauhaus for a shot from just outside the box which the excellent Carshalton keeper Danny Bracken did well to push the ball away.

On the half hour, Dan Bassett who scored a hat-trick for Carshalton against Cray last season combined with Krauhaus to fire a shot over.

Then from a free kick to the right of the area, Wood’s ball in was helped on by Derry for Bassett whose volley was held by Bracken.

In the 44th minute, Cray went ahead with a well worked goal which came from a throw in won by Bamba down the left who found Harrison Sodje who after a Messi turn swept over a cross meant for Wood who looked to have been impeded in the box but an advantage was played as the ball came to Bassett at the far post who tucked a shot under Bracken into the net.

If Cray were the better side in the first half then Carshalton came out much more positive after the break .

The Robins looked to threaten and Crossley Lema from outside the area fired a shot wide of the left post.  Then substitute Bradley Williams with a firm header from inside the area forced Rowley into a smart save pushing the ball out.

Cray were looking fairly comfortable but not getting so much joy going forward and it looked like the Wands would need a second goal or it would have been a very long second half.

In the 68th minute Cray did almost get a second when from a free kick out on the left, the ball was played towards the far post and Bassett with a Van Bastenesque volley fired over.

Two minutes later, Carshalton levelled following some rare hesitation down the left hand side and Alex Akrofi nipped in and from the byline set up Calvin Ekpiteta for a simple finish and a bit of a soft goal from the Wands point of view.

Cray came close two minutes from going straight back in front when Bamba down the left was unlucky to see his cross-shot get a touch from Bracken which sent the ball across the box and the despairing Wood just couldn’t get a touch for what would have been a tap in.

Going into the last ten minutes, Carshalton almost went in front when Akrofit fired a shot wide of the left post but Cray were able to absorb late pressure from the Robins.

The last half chance came in the last minute of four minutes added on time when from a free kick the ball came to Walter Figueira and his half volley was cleared off the line by Tanga.

In the end an at times scrappy game ended in a draw which kept Cray’s recent good away unbeaten run going and although perhaps disappointed overall not to take all three points continue to look hard to beat and there is a very good team spirit and determination in what is mostly a very young side.  Certainly Jephte Tanga can look back with pride on his debut, and Sodje down the left had a superb game, and Bamba was a real livewire and caused Carshalton plenty of problems down both sides and the hard working Tom Derry was excellent especially in the first half.

Cray next head to Dulwich Hamlet in the London Senior Cup on Wednesday night before heading to Kingstonian next Saturday in the Wands five game away tour.