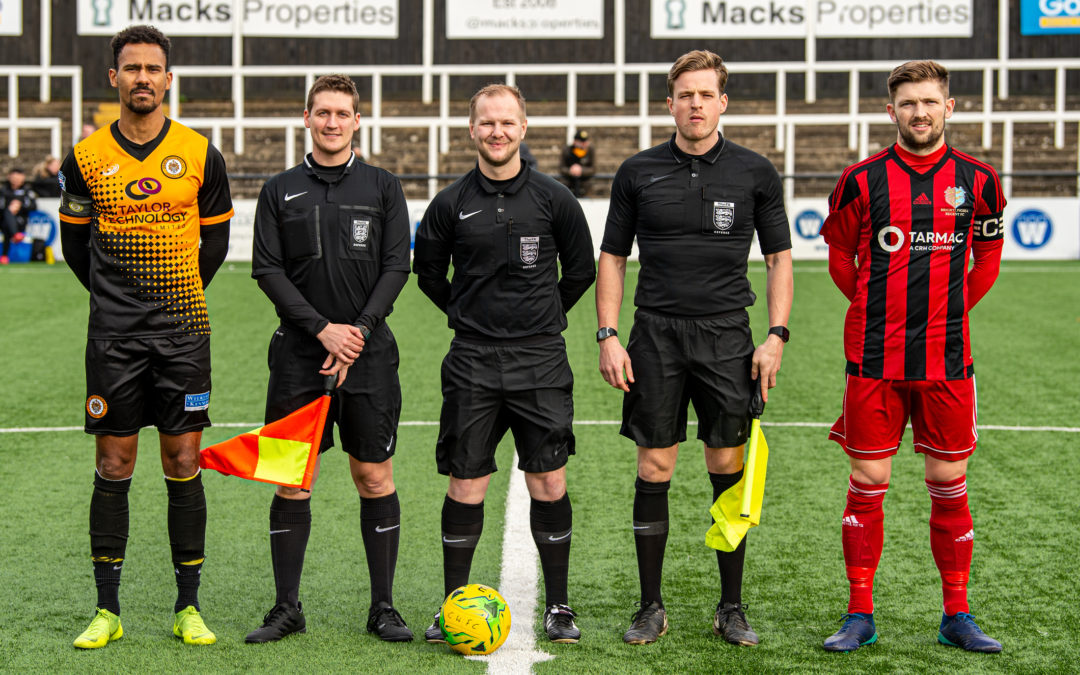 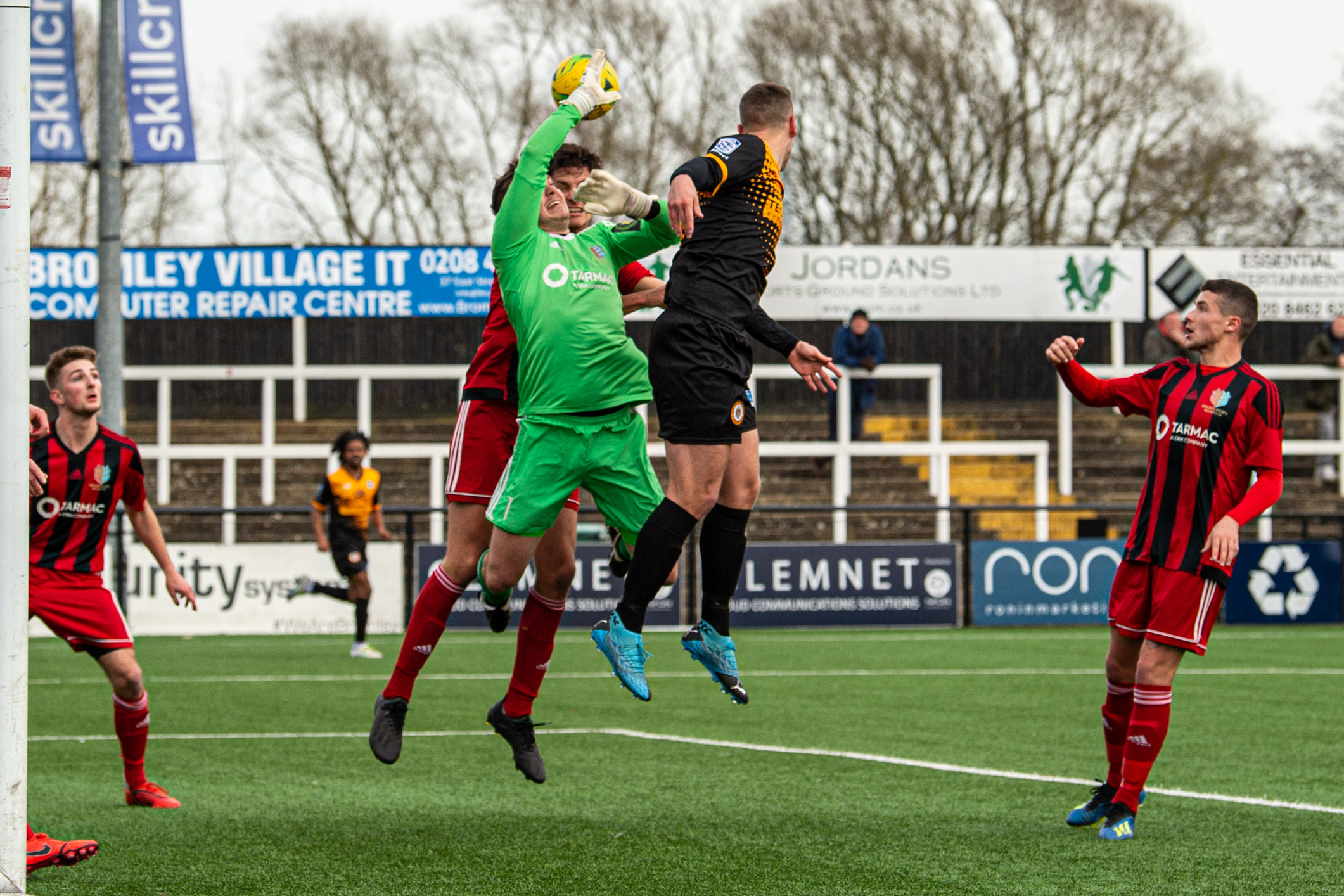 Cray Wanderers continued their remarkable form in 2020 with victory against Brightlingsea Regent at Hayes Lane which moved the Wands up to 2nd in the Isthmian Premier table, their highest ever league position at this stage of a league season.

Cray who are unbeaten now in 12 matches struck in the 9th minute through Joe Taylor’s 32nd goal of the season from Ben Mundele’s cross and despite opportunities to add to the lead had to settle for the one goal which puts the Wands on 64 points, seven behind leaders Worthing with 9 matches to play.

Cray came into the game in 4th place level on points with Hornchurch and Folkestone Invicta while the visitors to the Lane, Brightlingsea Regent are bottom of the table but only four points behind 16th placed Lewes so in a battle with seven other clubs to avoid the drop. 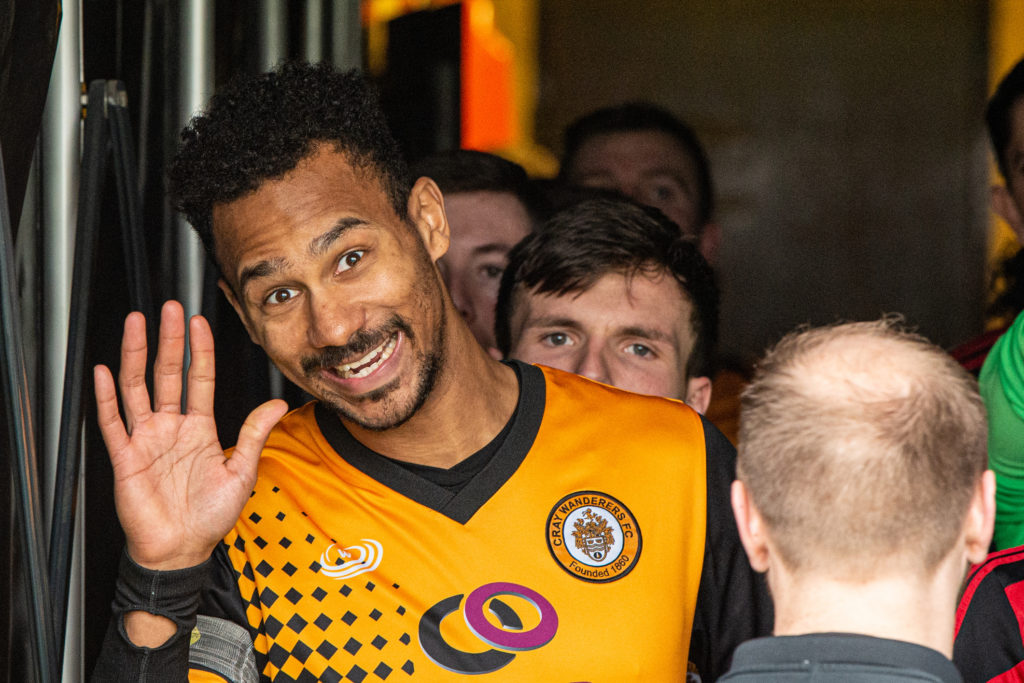 On a thankfully cold-free afternoon, the traditional pre-game handshake and lineup had been suspended due to the Coronavirus on instructions from the league.  For Cray there was only one change to the side which beat Merstham on Sunday with Lee Lewis coming in for Charlie Allen who was on the bench but Tony Russell could choose from a full strength side.

The game started with Kem Izzet’s Brightlingsea side looking positive and had the first half-chance of the game in the 2nd minute when Jordan Barnett and Romario Dunne combined to set up Lewis Byrne-Hewitt down the left of the area and just pulled his shot across goal and wide.

Then, Byrne Hewitt won a corner down the left and his cross towards the far post was met by George Forrest and his header was cleared almost off the line and away by Joel Rollinson.

‘Cray though were beginning to click into gear and in the 8th minute came close when Jay Leader played a ball through to Lee Lewis and his disguised pass found Joe Taylor on the edge of the area and his shot came back off the right post possibly by the fingertips of Charlie Turner. 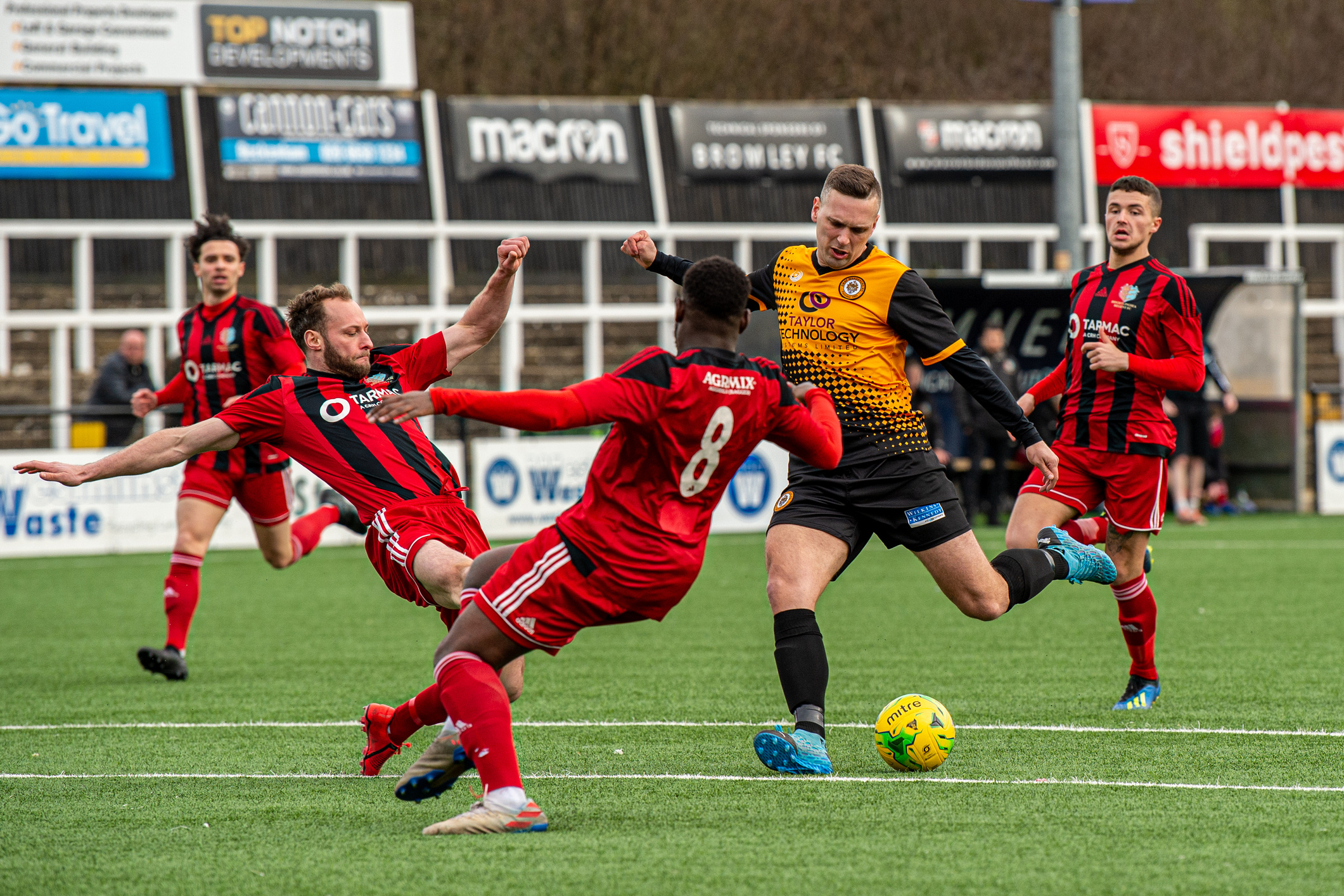 That was just a temporary reprieve for Regent as a minute later Cray were in front.  The ball was worked down the right and Bradley Pritchard played a pass through to Ben Mundele who close to the byline put in short cross which was cleverly sidefooted into the bottom left corner for his 26th league goal of the season and 32nd in all competitions. 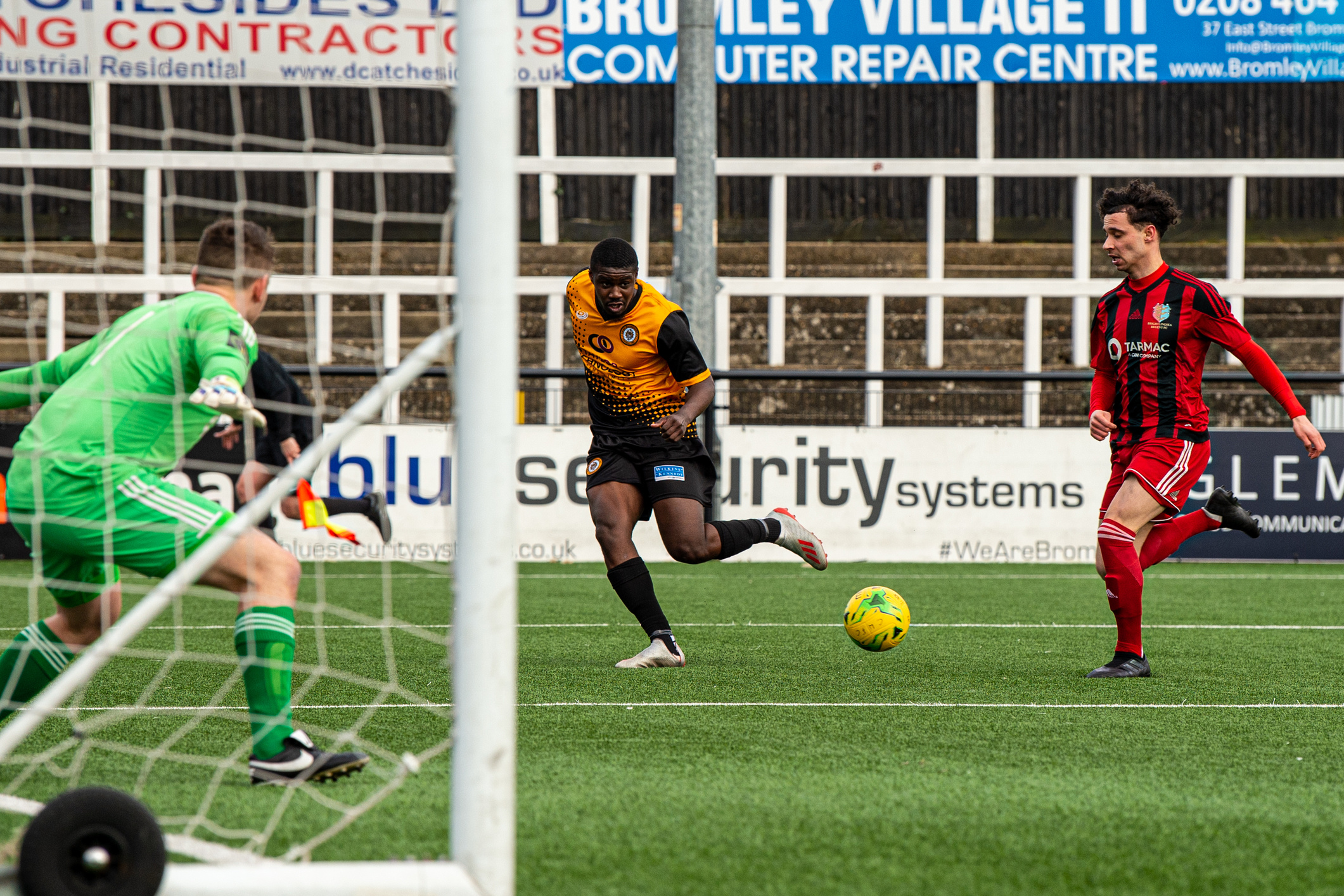 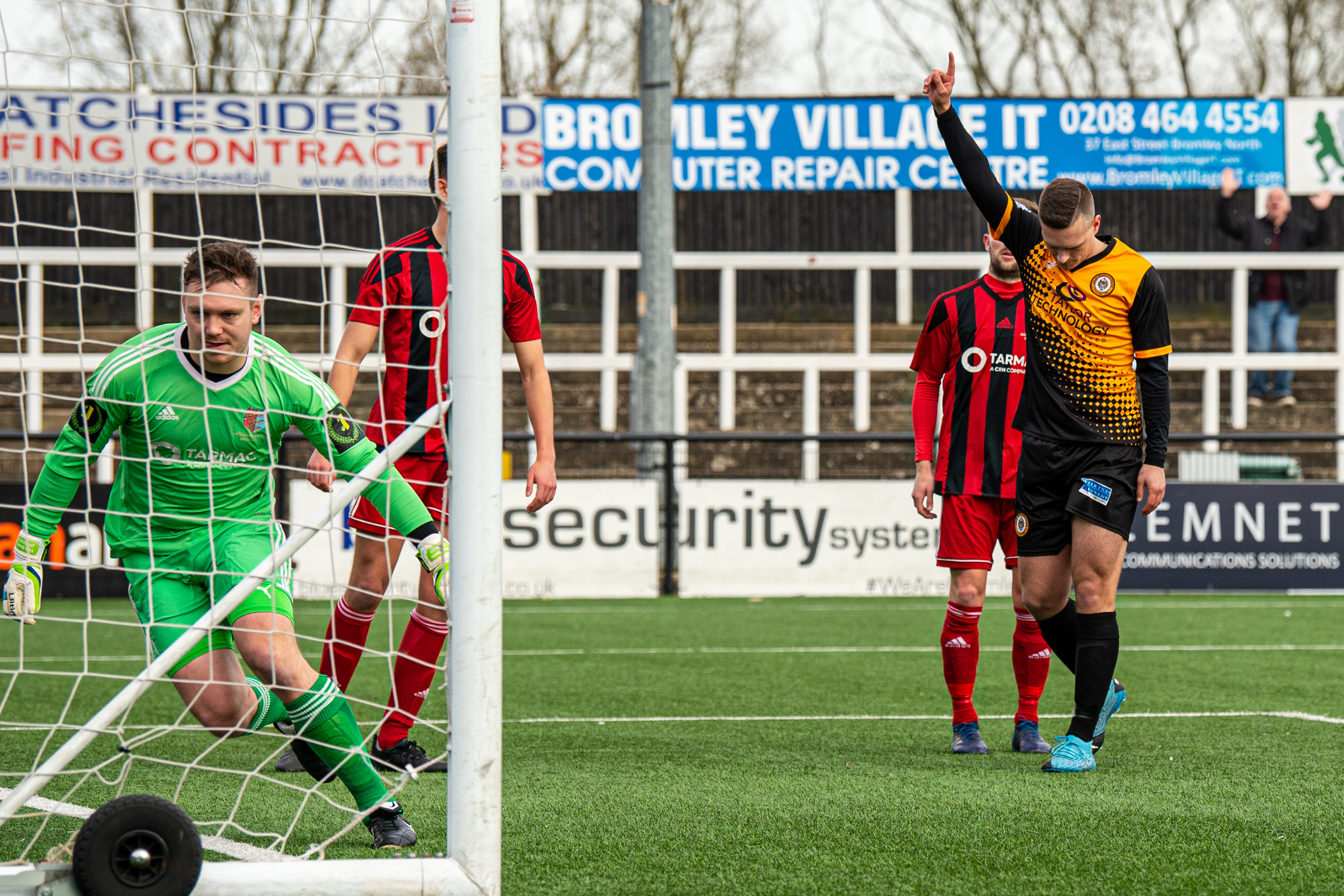 A minute later it could have been two nil when Lewis was played through and was unlucky to see his shot blocked by Charlie Turner and behind for a corner.   From the corner the ball into the box towards the far post was headed goalwards by Jay Leader and came out to Tom Phipp whose shot was blocked on the line and a foul was given as Cray looked to knock in the rebound

Shortly after Cray almost scored an excellent second goal when Tom Phipp superb ball out to the right found Rhys Murrell-Williamson who took on Jake Gould and then laid the ball back to Lewis whose shot from 20 yards was well saved by Turner who got one hand to push the ball out. 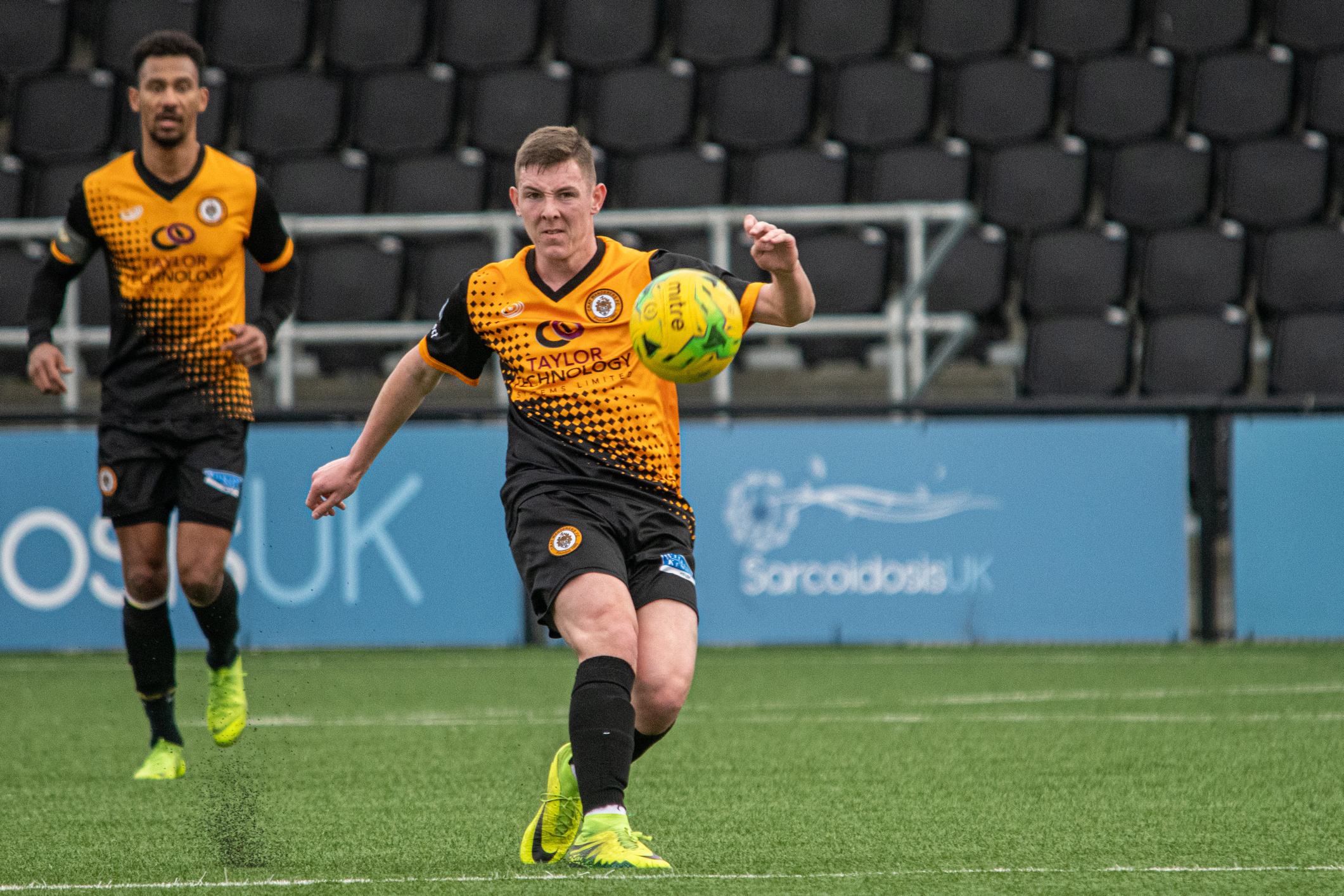 Brightlingsea were just hanging in the game at this stage but came close themselves to scoring when Byrne-Hewitt set up Barnett who turned and shot just wide of the right post.

Cray though were looking dangerous going forward and Murrell-Williamson hit a shot from 25 yards which was deflected through to Turner.

It was almost two-nil on the half hour when Phipp played a pass out to Mundele who from just inside his own half made a great run forward to the edge of the area and hit a fine shot which only just cleared the crossbar. 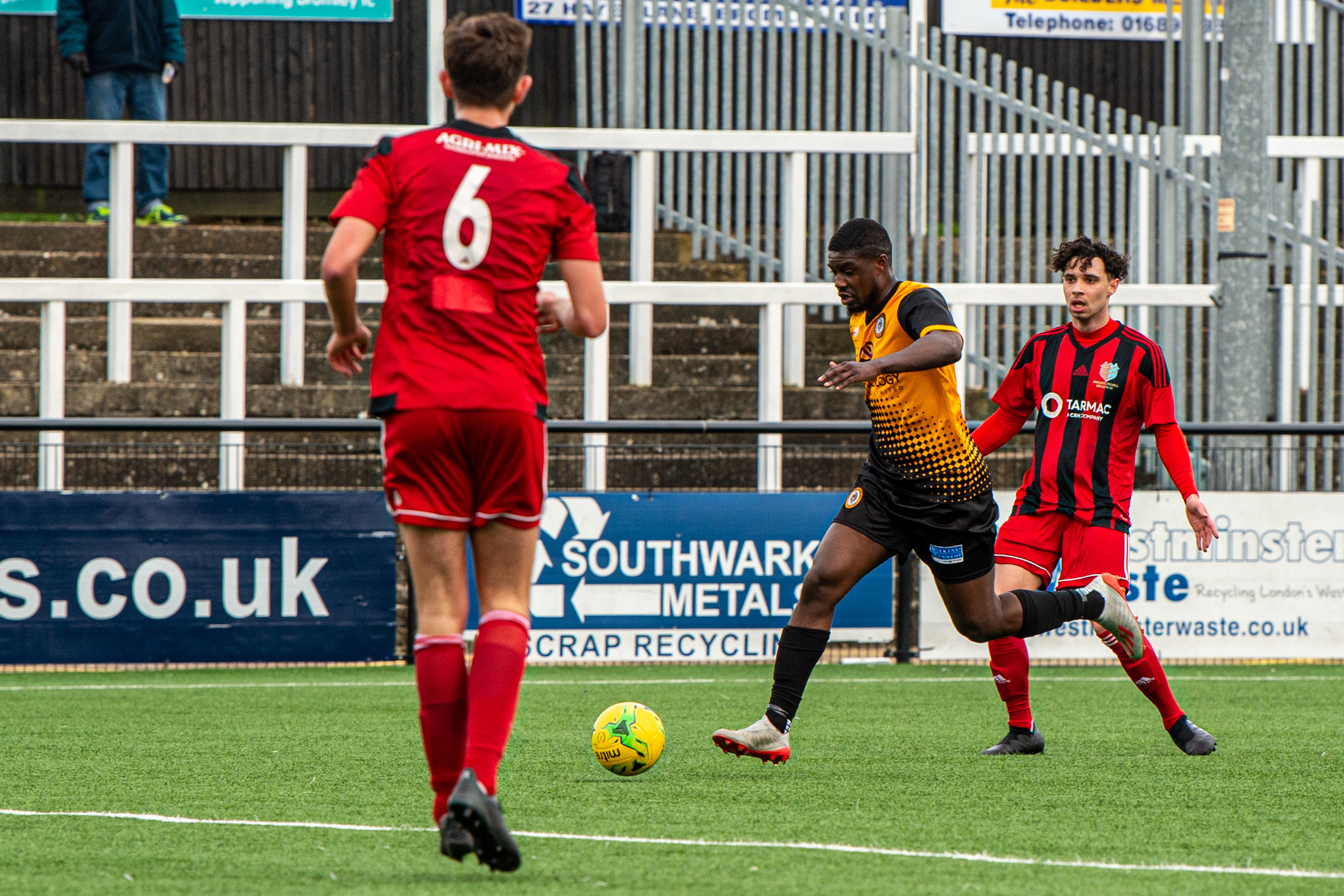 Then two minutes later Mundele combined with Taylor and Pritchard who set up Lewis who fired over the top from 20 yards.

The rest of the half became a more scrappier affair with the game become a bit stop-start with Brightlingsea perhaps the nearest to scoring when Barnett’s shot from just outside the box was blocked by Mitchell Nelson. However at half time Cray held the advantage.

The second half saw Cray seek a second goal from the start but Regent to their credit were still clinging on and all the time it was only 1-0 had a chance for a point. 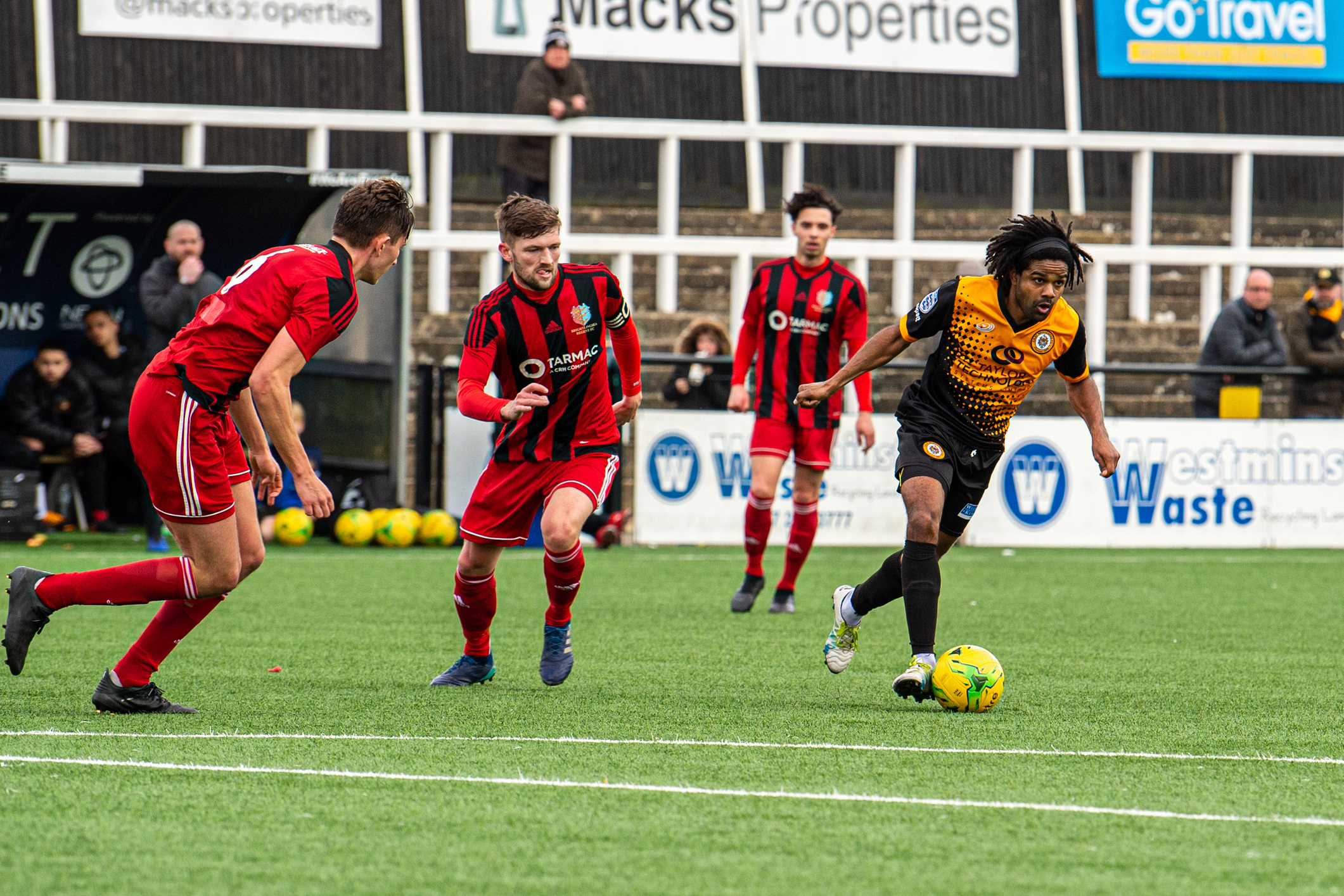 Cray though were playing some fine football and almost scored three minutes after the restart when Phipp and Murrell-Williamson combined to play a ball through to Taylor who confidently backheeled the ball to Pritchard who from the right edge of the area drove a shot into the sidenet.  Then Pritchard became provider down the right setting up Phipp who drove a shot wide of the left post.

Cray continued to push forward and Lewis won the ball in midfield and set up Rollinson who from 20 yards saw his shot well fielded by Turner.  Brightlingsea were occasionally a threat going forward and Byrne-Hewitt down the left cut inside and put a ball into the box which no-one could get on the end of. 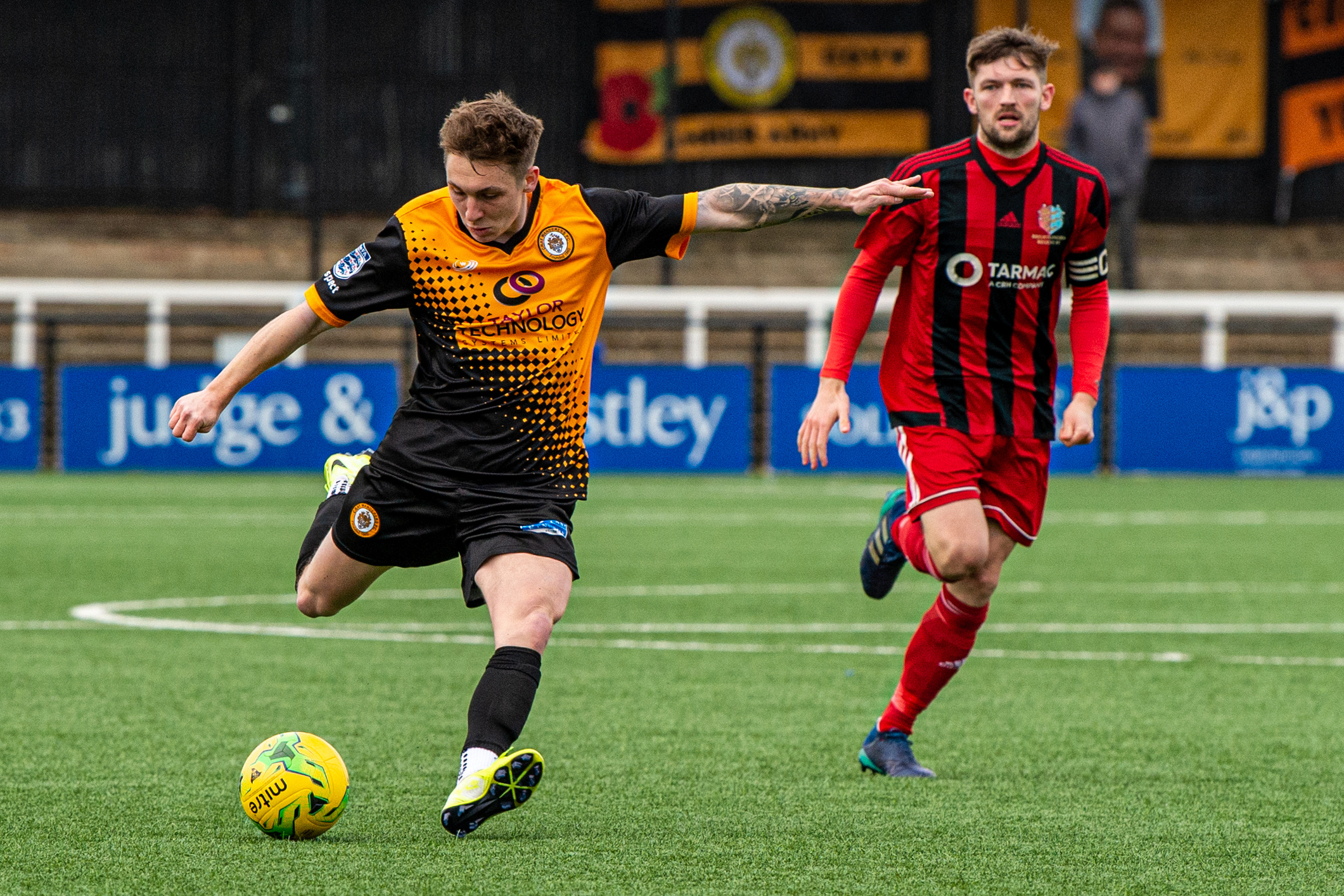 The Wands were presented with a free kick in a decent position 25 yards from goal and Murrell-Williamson curled an excellent effort but just cleared the angle of post and crossbar.

Brightlingsea then possibly created their best opportunity of the half when down the left, Barnett’s ball into the box found Byrne-Hewitt but he appeared to slip before he could shoot and the chance went away.

Cray were unlucky not to score when down the left Rollinson picked up a returned pass from Taylor just inside the area and his shot was met by a fine save from Turner pushing the ball round the right post.   From an excellent Pritchard right wing corner from the edge of the six yard box, Nelson rose above Pip Boyland to plant a header just over the bar.

The Wands couldn’t quite put the game to bed but nearly did when Pritchard’s magnificent ball from his own half put Murrell-Williamson through on goal and as Turner came out from the edge of the area pulled his shot just past the left post. 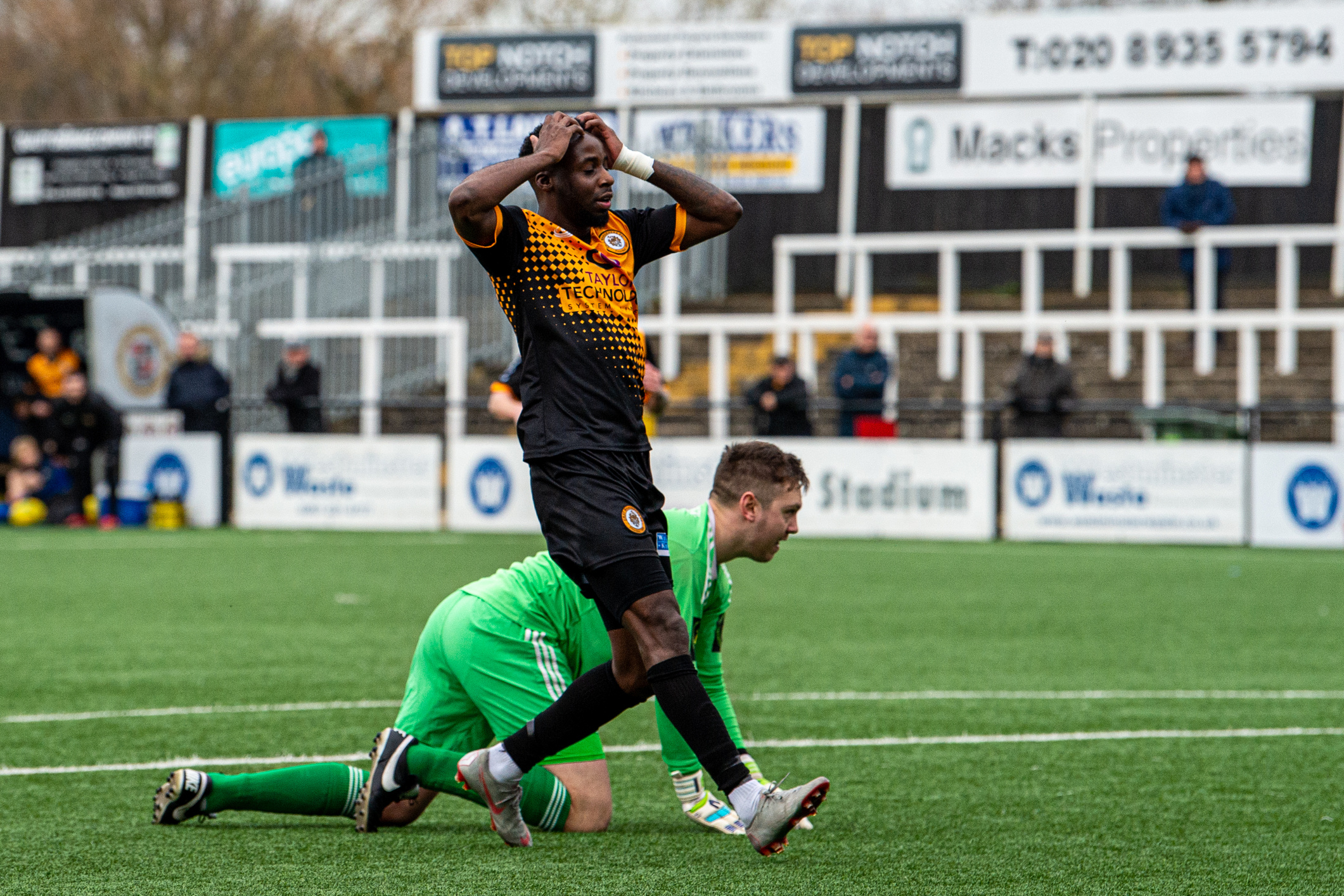 Brightlingsea tried to rally and Byrne-Hewitt’s ball in to the near post from the left was put behind for a corner.

Cray were then denied by Turner once again when Tom Carlse who had a fine game found Taylor inside the area who cushioned the ball to Rollinson whose first time shot was brilliantly turned round the post for a corner.   From the corner, Karl Dent’s cross was headed wide at the far post by Leader. 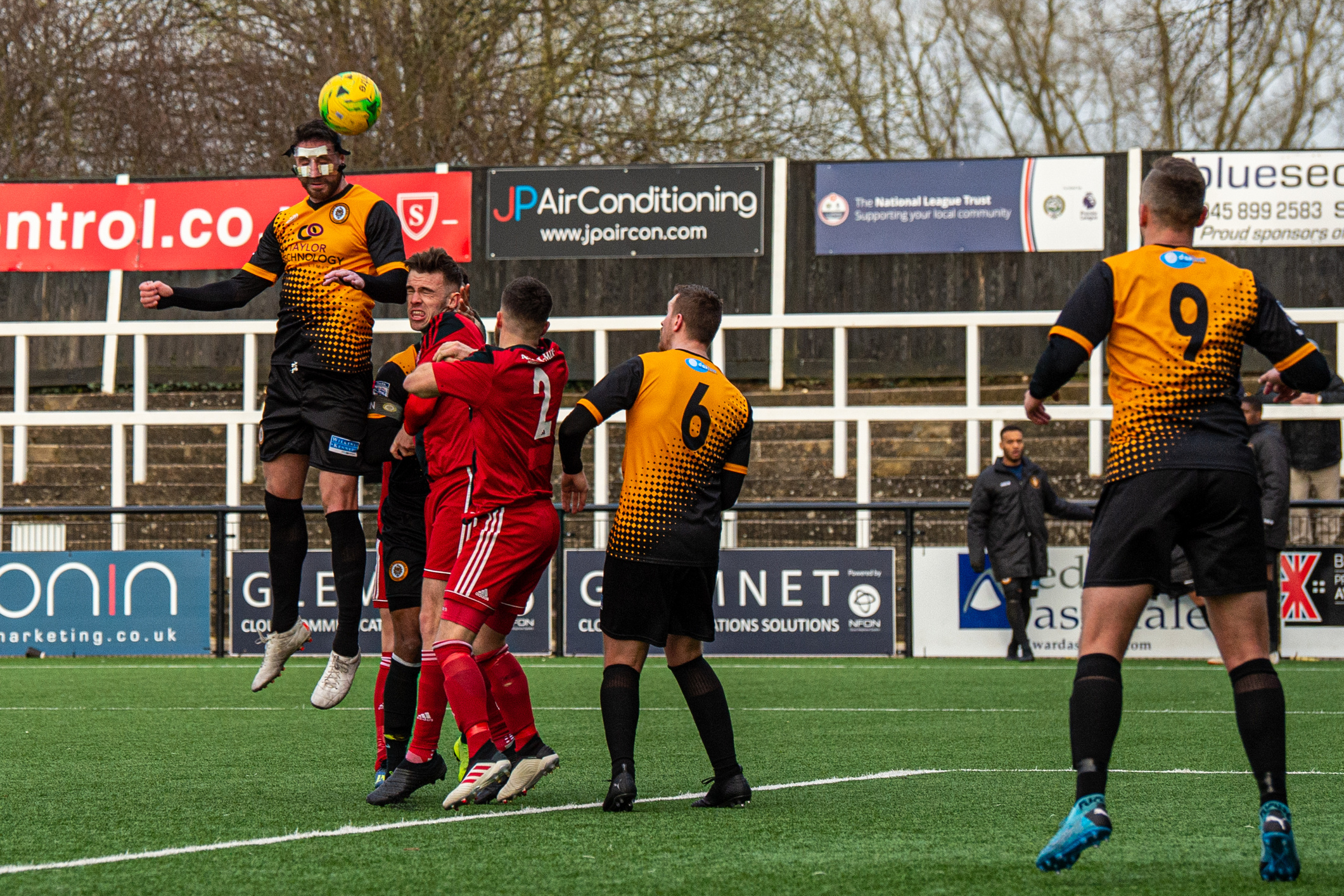 This was followed by another great run by Mundele who strode forward and his pass through beat the offside trap for Dent who ran on and looked to dink the ball over Turner as he came out who just got his hand to the ball and was cleared away for a throw-in.  Then Dent attempted a shot from just outside the area which was blocked by Boyland. 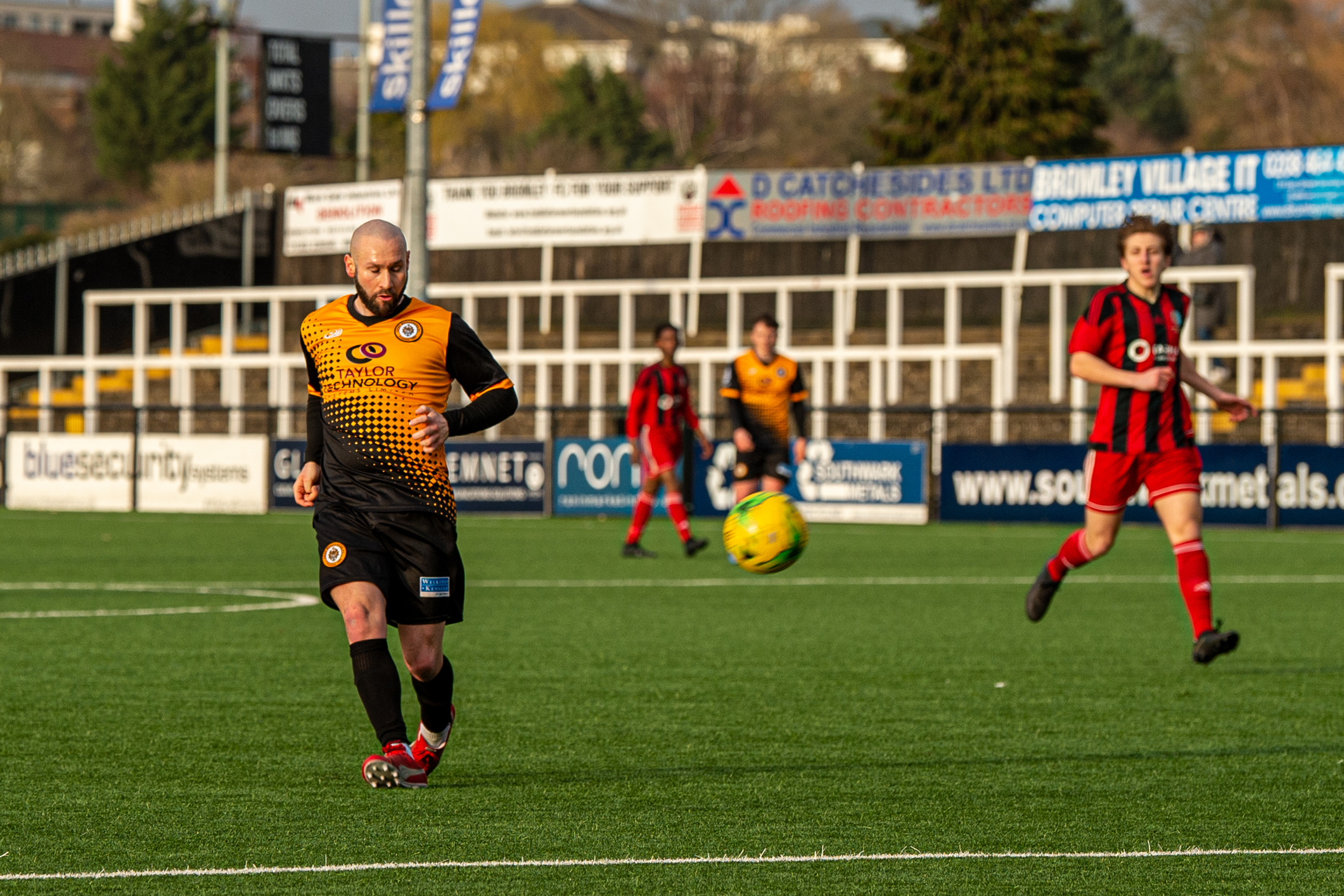 The unlucky Murrell-Williamson came close when he cut inside down the right and from just inside the area curled a shot just wide of the left post with Taylor looking to profit with a touch but had been flagged for offside.

Cray were on top for the closing minutes and down the right, Mundele who had a great game for Cray found Jerome Federico and his cross was put behind by Boyland for a corner. From the corner, Dent’s cross was headed over by Nelson.

Finally in the closing stages, Murrell-Williamson’s cross from the left found Federico who as Turner came out crossed the ball over to Dent whose shot was cleared by Jake Thompson.

In the end Cray saw out the remaining minutes to make it nine wins out of the last twelve and keep up their promotion push with the Wands most definitely in the race as the league goes into its last seven weekends.  Brightlingsea did well to stem the Cray tide and will be buoyed by the effort they maintained throughout which will serve them well during their fight against relegation. 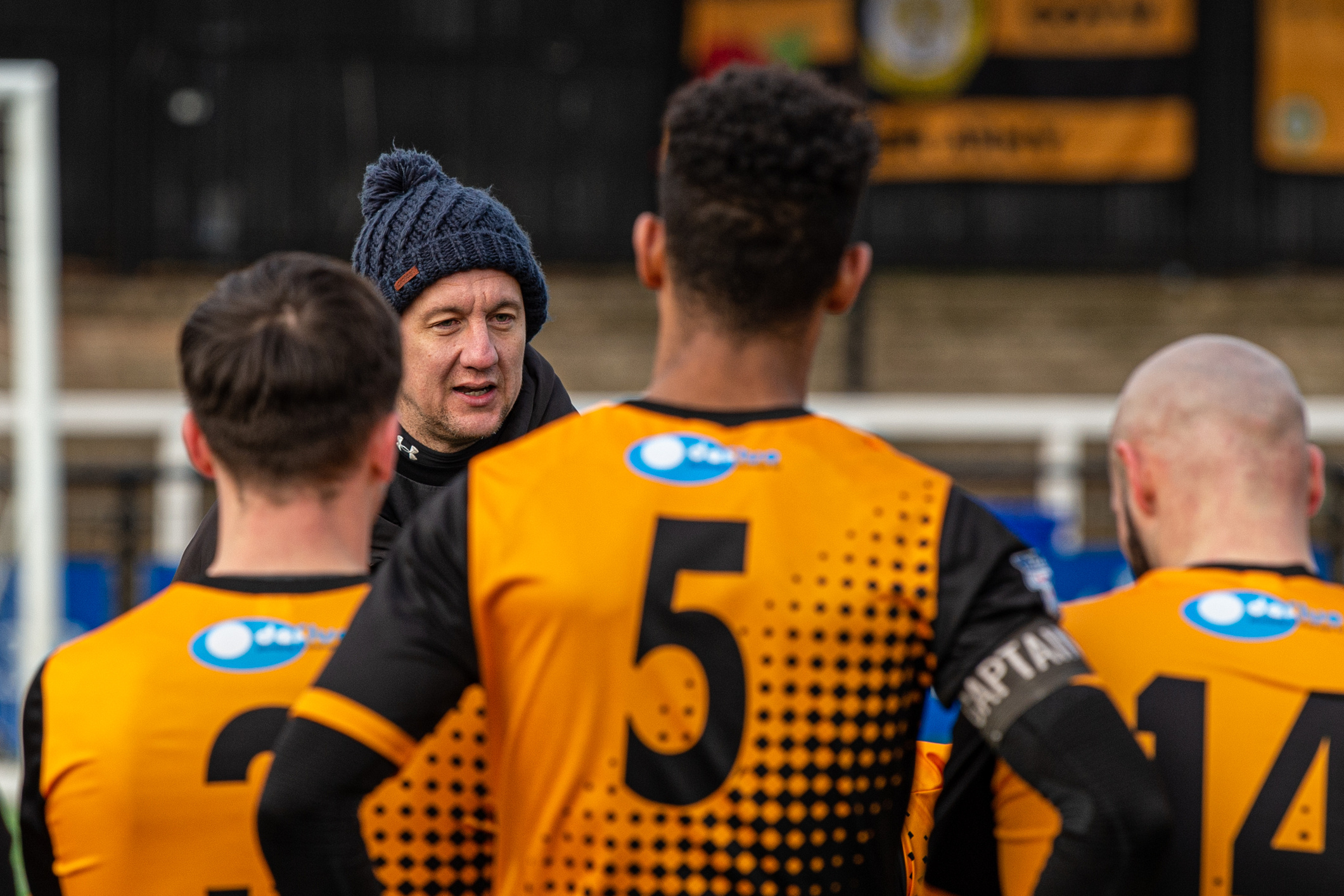 There were some fine performances from Cray this afternoon with Mundele, Pritchard and Nelson and Carlse excellent as was Lee Lewis for nearly 70 minutes.  Tom Phipp had a great game but Jay Leader was outstanding at the back and was winning headers from the beginning of the match right to the end.

Cray have now won back to back home games against sides in the bottom half and they now have two away trips similarly against Cheshunt and Corinthian Casuals which will be hard but the Wands are in a confident mood.  With Hornchurch and Folkestone Invicta both drawing the win enabled Cray to move above them into 2nd and are just seven points off Worthing at the top. There is so much football still to be played before the end of the season but Cray are making it an exciting one for their fans and who knows how it will end.