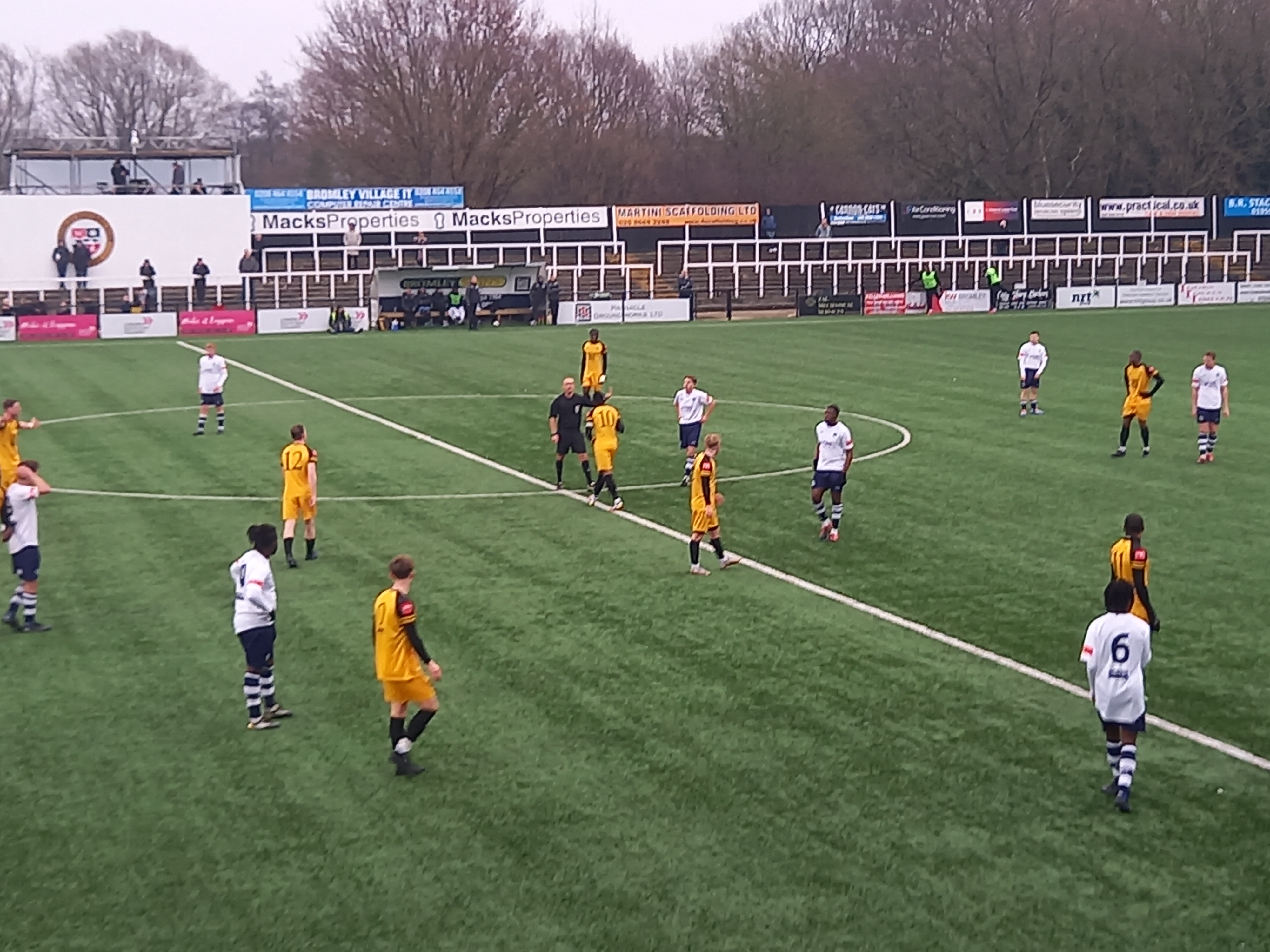 Cray Wanderers suffered more home disappointment as Corinthian Casuals completed a league double over the Wands for the first time as an 88th minute winner from Oliver Sitch inflicted an eighth home league defeat of the season.  Cray remain 20th in the lsthmian Premier league table but do have two home games upcoming next week.

For the second home match running Cray were more than worthy of a least a point from the game and had the better of the first half and the beginning of the second and deserved to go in front two minutes before half time through Jamie Yila’s eighth goal of the season.  However, Corinthian Casuals are a durable side and struck back just before the break when Sitch was on hand to score from close range.  It was beginning to look like it would be a draw but two minutes from time, Sitch scored his second and the winner when he converted from Kieron Cadogan’s pass.

Cray were looking to bounce back from Wednesday night’s 0-1 defeat to Bognor Regis Town and from the side which started that game the only change was the return of Richie Danquah at centre-half in place of Jai Reason.  Corinthian Casuals were unbeaten in their last three league games but had gone out of the London Senior Cup to Harrow Borough on penalties last Tuesday.

The game began at a pretty brisk pace with Corinthian Casuals shading the early possession but it was Cray who forged the first real opening in the 8th minute when Tom Hanfrey’s pass found Jamie Yila down the left and his cross found Kyel Reid at the far post and his shot at the near post was saved by James Bracken. 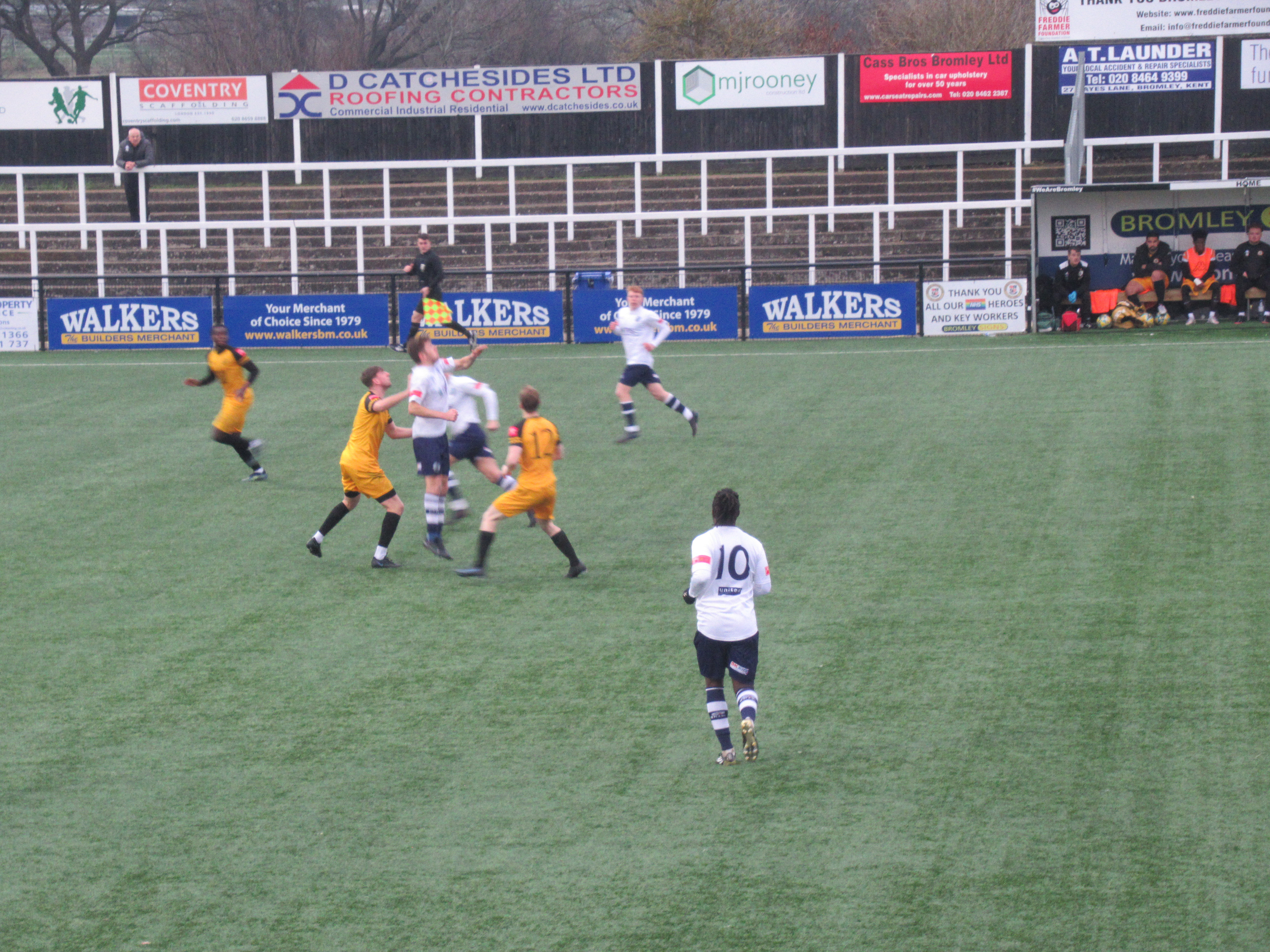 Six minutes later, Cray came close again when Bailey Vose bowled the ball out to Reid who strode forward down the right and played the ball into the area to Chris Dickson whose cross shot was parried by Bracken.

Corinthian Casuals had a decent spell of possession afterwards and won three corners and in the 20th minute, Bobby Mills set up Oliver Sitch who drove a shot from outside the area over the top.

In the 23rd minute, Cray broke with pace and Hanfrey and the impressive Cameron Brodie combined to play the ball out to Reid down the right and his cross was met first time by Yila and his shot was well held by Bracken.

Shortly after Casuals again down the right posed a threat and Mills drove in a shot which looked like it might be sneaking in at the near post but went behind and hit the side netting.

Ten minutes before half time after a good spelling of possession and passing from Cray, Brodie played the ball to Kasim Aidoo who made a great run down the left and to just inside the penalty area and his low shot was again held by Bracken.

Then from a free kick down the left, Luca Albon’s cross to the near post was met by a flicked header over from Hanfrey.  At the other end a cross from Cadogan was deflected of Freddy Baron but claimed by Bailey Vose.

Cray won a couple of corners before half time and in the 43rd minute broke the deadlock when from down the left, Albon’s ball into the area towards the near post was headed in by Yila and gave the Wands the lead they merited.

The Wands a minute later had claims for a penalty waived away when Anthony Cook down the left of the area looked to have been brought down by Ola Williams but nothing was given.

That proved crucial as in added on time, Corinthian Casuals drew level when Sitch received the ball down the left of the area from a pass from the right and applied a smart finish when a lead for the Wands at half time would have bred confidence for the side. 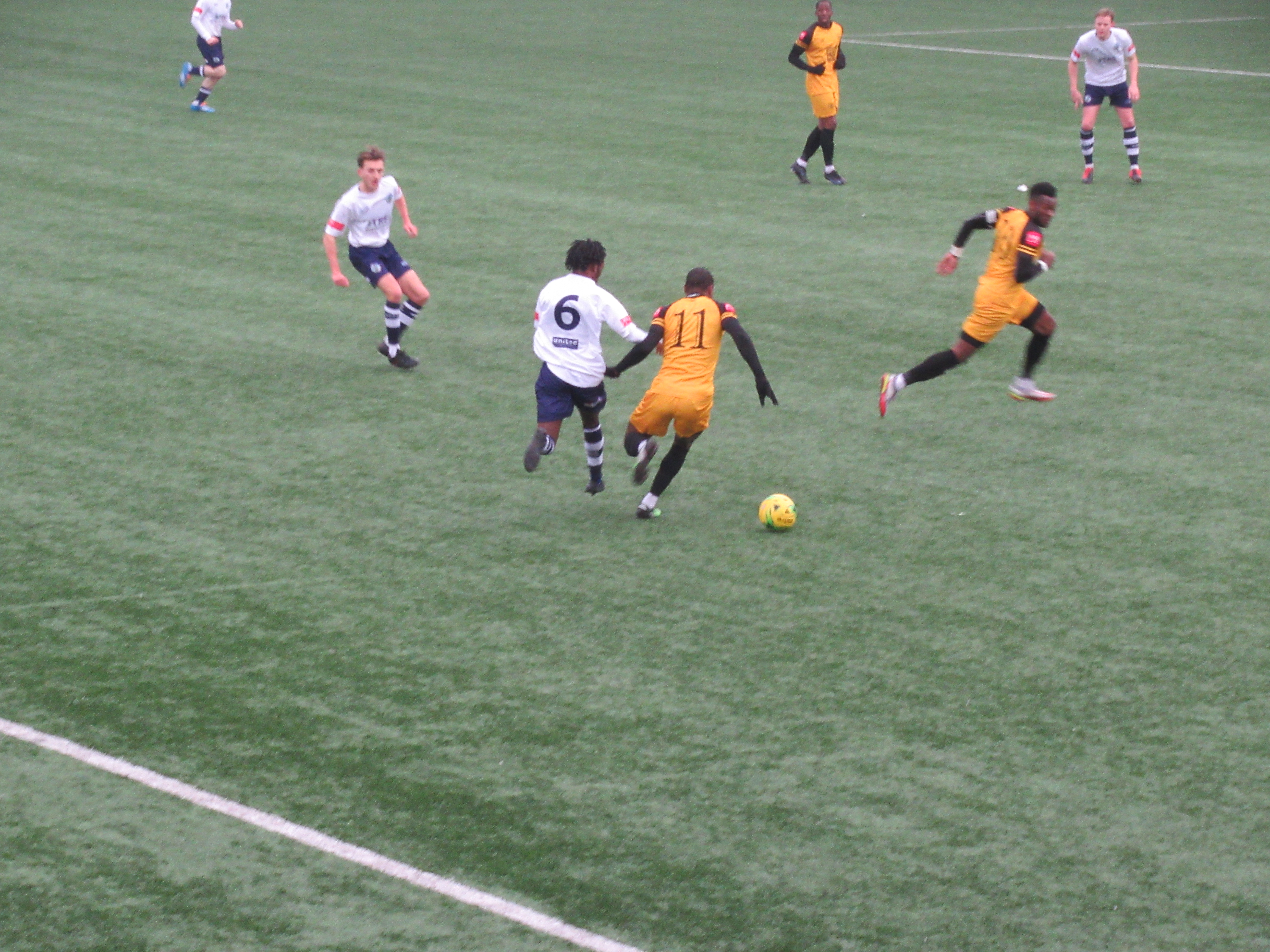 Cray began the second half brightly and kept possession well and in the 53rd minute Albon and Cook combined and his effort was blocked  by Jack Strange and following up Cook blazed a shot over from 30 yards.

Just before the hour Cray were unlucky not to score after some fine build up play and Albon found Brodie who played the ball to the lively Aidoo down the left and his fizzing ball across was fired over the top from 7 yards by Albon.

Corinthian Casuals hadn’t offered too much going forward but did come close when from a free kick out on the left, Elliott Bolton’s cross came out to Ola Williams down the right and his cross-shot went across goal and behind for a goalkick.  Then from a corner down the right from Cadogan, Ricardo Thompson got in a header which was well claimed by Vose.

Cray continued to pose a threat and Brodie and Yila combined and played a pass out to Albon down the left and he cut inside and drove a shot fractionally past the left post.

The Wands were still edging the game but just couldn’t create a stand out chance and as the half entered the last six minutes Casuals began to pose more of a threat.  Firstly, Bolton found Jack Tucker down the right and his ball into the box was headed over by Sitch from 10 yards.

Then down the right, Emmanuel Mensah’s ball across was headed past the right post again by Sitch.

However, with two minutes to go Cray gave away possession inside their own half and Kieron Cadogan played a ball through to Sitch down the right of the area and turned a shot past Vose into the bottom left corner to give Corinthian Casuals the lead.

Cray had once again played well, put in a lot of effort and hard graft and were certainly not outclassed but not for the first time were perhaps just unable to see out latter stages of the game and Corinthian Casuals saw out the remaining minutes to win the match and moved on to 35 points in 11th place.  This was a different match all together to the previous meeting in September when the Wands were outclassed 0-4 and  yet again fine margins came into play as Cray went one nil up, could have had a penalty and then conceded on the stroke of half time when on top.

Cray now move on to a huge match on Wednesday against Leatherhead who are 22nd in the table. There are plenty of points to play for and Grant Basey is still new to working with the group of players but there have been definite signs of improvement and an attacking brand of football to give hope to supporters that better times may be just around the corner.