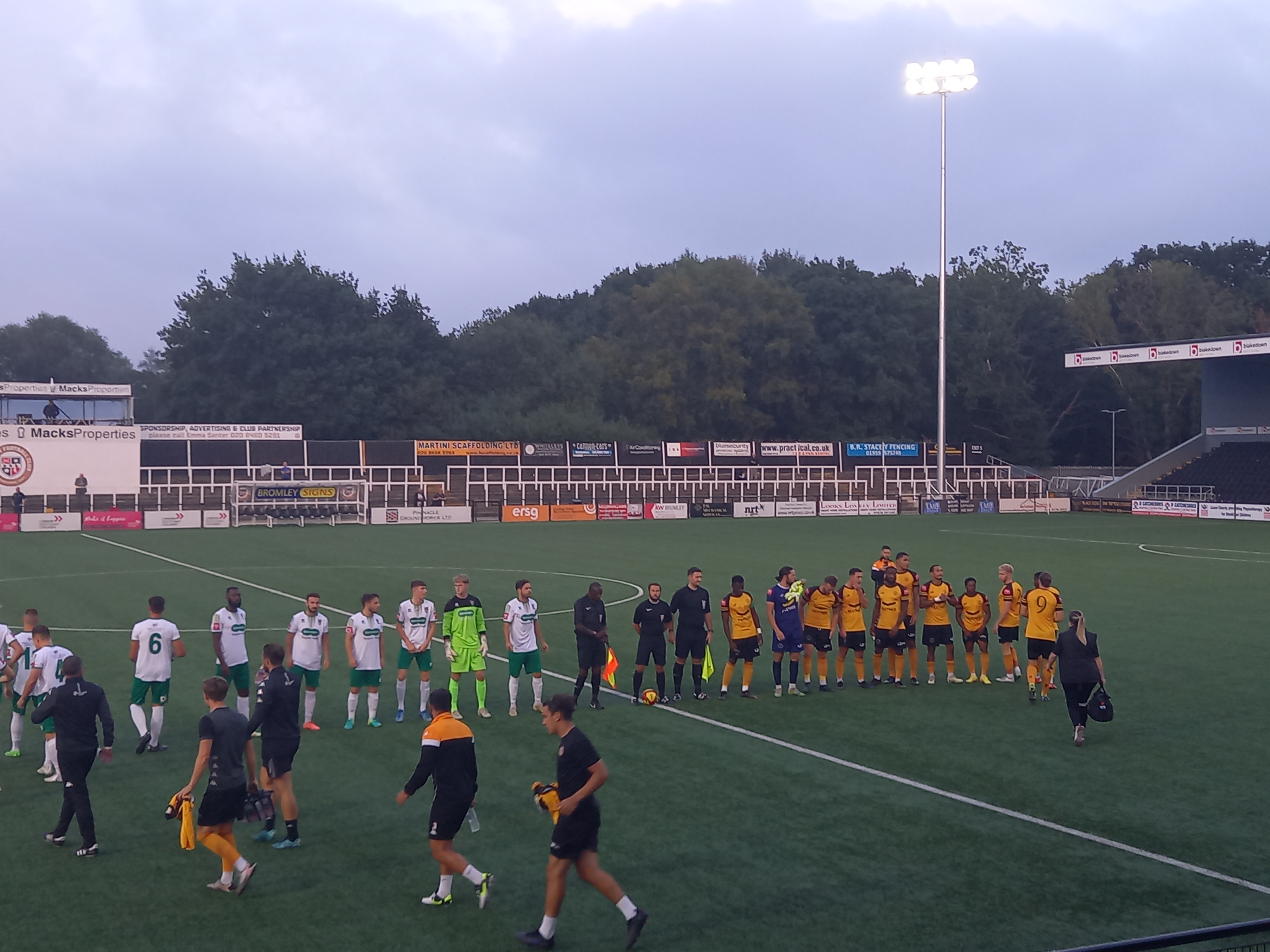 Cray Wanderers notched their first point of the season in a lively contest as Bognor Regis Town maintained their unbeaten start to the season by coming back from two nil down in a match which either team could have won at the end.

Cray edged the first half and deservedly led Harold Joseph turned the ball in at the far post from an Anthony Cook right wing corner in the 28th minute.  Two minutes after the restart, Nyren Clunis notched his first goal for the Wands with a superb strike from outside the area which crashed into the top right corner.

A double substitution just before the hour added impetus to Bognor and Isaac Olaniyan was adjudged to have been brought down in the area and fellow substitute, Nathan Odonkonyero scored from the spot in the 72nd minute  Four minutes later, Odonkonyero scored his second with a crashing strike from 20 yards to level the scores and in the end finished all square.

Cray were unfortunate to be beaten by Billiercay Town on the opening day of the season and Neil Smith named an unchanged lineup encouraged by an energetic display.  Robbie Blake’s Bognor side beat Hornchurch in their first game and made one change to their lineup with Sam De St. Croix coming in for Isaac Olaniyan.

On a thankfully less humid evening than of late, there was a terrific pace to the match and Bognor started brightly but Cray created the first real opening when from a corner down the right, Anthony Cook’s cross was met by the head of the impressive Jalen Jones and was well claimed by keeper Toby Steward.

Cray came close twice in quick succession when Sam Skeffington found Michael Ademiluyi and from just inside the area fired over the top.  Then moments later, Ademiluyi was played through down the right of the area but Steward made a smart stop with his legs.

Bognor though had the first clear chance of the game when down the left, Nick Dembele’s cross into the area was headed over from 4 yards by Tom Chalaye.  Then Alfie Bridgman, who scored the winner against Hornchurch found space to fire in a shot which went wide of the right post.

In the 28th minute, Cray opened the scoring after a good spell of pressure and Cook found Derry down the right and his near post shot was turned round the post by Steward for a corner.  From the corner, Cook’s ball to the far post saw Jones’ effort blocked and Joseph was on hand to stab the ball into the net,

Shortly after Skeffington came close with an audacious effort from 35 yards which went just over and then Dan Bassett made a run forward and his shot was held by Steward.

Bognor had a spell of pressure before half time but at the break Cray held the advantage.

The second half could not have started better for Cray as two minutes after the restart scored a second goal.  Mitch Chapman who had a fine game in midfield won the ball and picking up the loose ball, Nyren Clunis charged towards goal and from 25 yards curled an unstoppable shot wide of Steward and into the top right corner,

Cray continued to have the upper hand in the early stages of the half and won a handful of corners while the best effort for Bognor came from a free kick down the left and Jordan Clark shot wide.

Bognor introduced Olaniyan and Nathan Odonkoyero just before the hour and certainly added pace and power to the Rock attack.  Bognor had a strong ten minutes of possession and in the 72nd minute were awarded a penalty when Olaniyan went down in the area under a challenge and from the spot, Odokononyero fired home the penalty.

Bognor came close to levelling in the 75th minute when Sam De St. Croix fired just wide of the left post but a minute later drew level when the lively Odonkonyero picked the ball up and curled home a fine finish wide of Shaun Rowley and into the net and make it  2-2.

The Rocks fancied their chances at this point and came close to going ahead and from a cross from the right to the near post Odonkonyero turned the ball wide.

Shortly after, Charlie Bell’s cross from the left was turned wide by Dembele and Cray were on the ropes.

The Wands though showed good character in the closing stages to batten down the hatches and came close to winning the game when a Cook cross from the right was volleyed wide by Clunis.

Then after a couple of corners, the ball was cleared to Jacob Munting who shot wide and with the last kick of the game, Chapman was unlucky with a strike which just went past the left post.

In the end the game finished in a draw which is a decent result for both teams and was a very good match with lots of attacking intent and both teams emerge with credit with the season still very much in its infancy.

Cray move up to 17th with the point in the very early league table and are at home to Canvey Island on Saturday while 6th placed Bognor are away to early pacesetters Aveley.

Cray have produced two encouraging performances and Ademiluyi, Jones, Clunis, Chapman and Skeffington were amongst a number of star Wands performances and after they withstood a strong Bognor fight back showed the necessary character to finish the game the stronger.