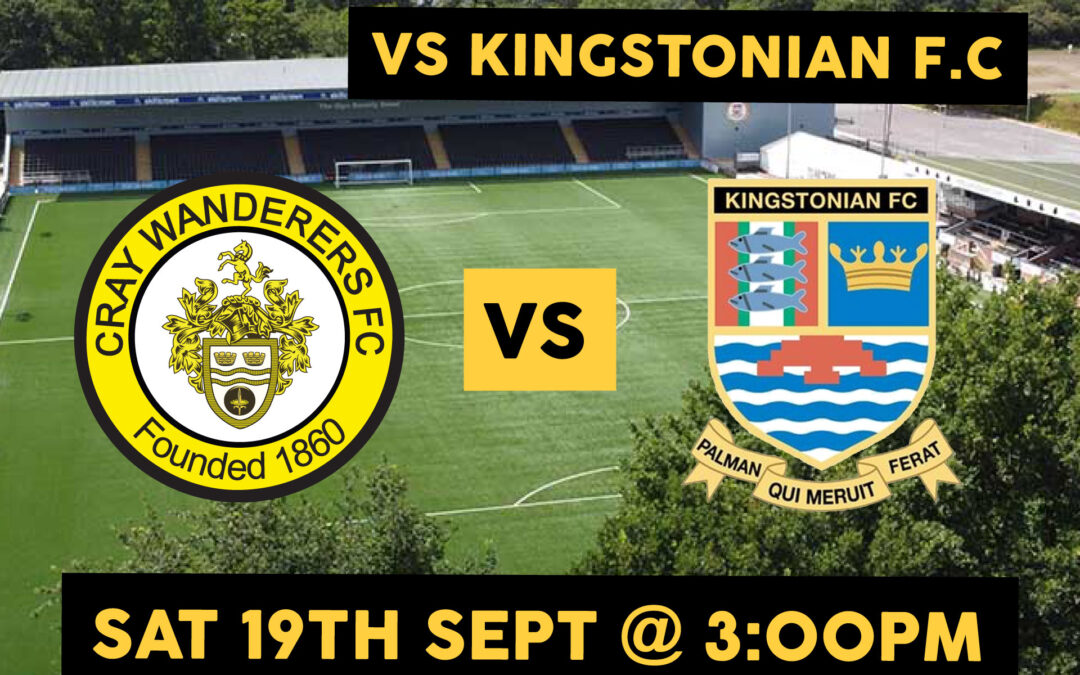 Cray Wanderers returned to Isthmian League action after a six month layoff and came back in swashbuckling style as the Wands recorded their first ever opening day win in the Isthmian Premier and their biggest opening day win since 1952 beating a highly fancied and strong Kingstonian side at Hayes Lane.

Last seasons’ two encounters finished 0-0 but it was evident that was not going to happen again after a rip-roaring start to the game full of good football and Cray took a merited lead through a superb finish from Joe Taylor from the right of the penalty area.  Kingstonian were very much in the game and came close to scoring on a couple of occasions but Cray went two nil up when Jason Banton scored on his debut with a shot from close to 25 yards which evaded keeper Rob Tolfrey and out through a hole in the netting.

The second half was an end to end affair and in the 51st minute following a Kingstonian attack, Cray countered to devastating effect as Banton showed his pace to get away from Kadell Daniel to burst down the left and eventually lay the ball across to Rhys Murrell-Williamson who fired in from 6 yards.  Seven minutes later the game was to all intents and purposes over when from a free kick 25 yards out, Freddie Parker’s shot was deflected into the net past Tolfrey off Simon Cooper at the end of the wall to continue his recent free kick success.

Kingstonian pulled a goal back fifteen minutes from time with a well worked goal and finish from Corie Andrews.  However, Cray finished the match in style with another cracking finish from Taylor from another Pritchard assist to basically carry on as they left off from last season with a 5-1 win.

The scene was set for the Isthmian Premier return for the first time since March 7th and on a sunny and warm with a pleasant touch of breeze afternoon and perfect for a great game of football.  Both sides went into the match with confidence but Kingstonian had the benefit of a competitive match in the FA Cup last weekend and their support from the LB Kingston-upon-Thames arrived in good spirits.  Cray though despite missing the likes of Tom Phipp, Ben Mundele, Karl Dent, Kyron Richards and Jerome Federico named a strong side and included Jason Banton for his Cray Wanderers debut.

The game started off at a brisk pace and Cray were most definitely on the front foot and Lee Lewis had the first shooting opportunity down the right with a shot from distance which went just past the left post.  In the 6th minute, good set up play from Joe Taylor saw the ball come to Rhys Murrell-Williamson who hooked a shot from 20 yards again wide of the left post.

Two minutes later, Cray went in front with a goal which stemmed from a superb tackle from Mitchell Nelson on ex-Wand Andre Coker down the right and Murrell-Williamson found Bradley Pritchard who in turn played a first time ball to Taylor who turned past Fabio Saraiva just inside the area and curled an unerring shot past Rob Tolfrey.

Cray continued to press and Murrell-Williamson fired over the bar from a free kick but Kingstonian showed they could attack with purpose and Andre Coker found Saraiva and his ball across was fired over by Elliott Buchanan.  Then for Cray, Taylor found Jason Banton down the left who curled in a shot which was gathered by Tolfrey.

The Wands came close to scoring a tremendous second goal when Lee Lewis found Tom Carlse down the left and his ball across to Taylor was held up for Murrell-Williamson who wrapped a shot against the right post and out into play.

The K’s to their credit got back into the game and had a good spell around the half hour mark. Firstly from a free kick 25 yards out, Kadell Daniel’s shot was held by Lewis Carey.  Then Carey did superbly to deny Coker who made a good run from midfield and his shot from distance was pushed away well by the Cray keeper.

Then after good play down the left, Buchanan played a pass to Coker inside the box and his shot was saved well by the legs of Carey.  This was followed by Saraiva fizzing a cross from the left across goal and no-one could apply a touch and then Tom Kavanagh saw a shot from distance parried away by Carey.

Just when it seemed Kingstonian had a foothold in the match, Cray scored a second goal out of nothing in the 39th minute when the ball was played down the left and Tom Carlse found Taylor who laid the ball across to Banton who looked to play the ball into Freddie Parker in the area but the ball was cleared by Simon Cooper back out to Banton who let fly from 20 yards and the ball went past Tolfrey into the bottom left corner and out through the hole in the net but no doubt it had crossed the line.

This left Cray with a two goal lead at the break but the feeling was that the next goal in the game was going to be the most important as a K’s goal would put the match back in the balance while another Cray goal would probably seal the game.

The second half began with attacking intent from both sides and Saraiva down the left hooked a ball into the box which was claimed by Carey while at the other end Taylor set up Murrell-Williamson who fired over the top. Then for Kingstonian, Buchanan down the right hit a shot which was held by Carey.

In the 51st minute, Cray scored the vital third goal when Kingstonian won a corner down the left the ball into the box was pushed away by Carey and the ball was blocked. The loose ball came the way of Taylor on the edge of the Cray box and played a ball out to Banton down the left who sped past the challenge of Kadell Daniel and through down the left of the area and squared the ball across to Murrell-Williamson who tapped in from six yards.  Certainly the prospect of Banton and Murrell-Williamson combining down the wings is a mouthwatering one for Cray fans.

Seven minutes later, Cray scored a fourth goal to leave real daylight between the teams when from a free kick 25 yards out in a central position, Freddie Parker hit a shot which deflected off Cooper in the wall and past Tolfrey giving the keeper no chance.

From here Cray were looking to implement some game management and Kingstonian came close to scoring when Harry Osborne set up substitute Corie Andrews who found space but fired over the top from the edge of the area.

With fifteen minutes left to play Kingstonian pulled a goal back with a well worked goal with Kenny Beaney and Kavanagh combining to find Omarr Lawson who dinked a pass through to Andrews down the left of the area and fired past Carey into the bottom right corner.

The K’s looked to end with a rally and a free kick from Tom Richards was headed over by Cooper and then Richards found Kavanagh who drove a shot from the edge of the area down the right which was deflected behind for a corner.

However, the last word went to Cray in the 81st minute when down the right Barney Williams found Emanuel Oduguwa who played a pass to Lewis and he too to ritchard who set up Taylor from the edge of the box who stroked the ball past Tolfrey to make it 5-1.

Towards the end a corner from Parker down the right was headed over by Taylor and then seeking a hat-trick, was played into the box by Williams but Tolfrey did well to block the ball and the chance went away.

Cray though had been in tremendous form and against a side who will be there or thereabouts at the top come the end of the season and continued the unbeaten run in 2020 with possibly the best home performance of the year.  The defence were excellent against a pacey attack and the forward play was a joy to watch and the midfield won the key battles to help turn the game Cray’s way.

The Wands next take on SCEFL Premier Fisher in the 1st Qualifying Round of the FA Cup on Wednesday night and then next Saturday visit East Thurrock United. With so much indecision over any possible future lockdowns no-one quite knows what is to happen before that but this was the perfect tonic to forget the pandemic for 90 glorious minutes.