A note for supporters that due to Merstham’s FA Cup victory on Saturday, the scheduled Isthmian Premier league match at Merstham on 2nd October has been re-arranged and will now take place on Tuesday 9th November, 7.45 pm ko at the Whiskey Bible Stadium.  The next scheduled away game for the Wands will be at Carshalton Athletic on Monday, 4th October, 7.45pm

Another note that Cray Wanderers will play a specially arranged friendly vs. Bromley U23s at Hayes Lane this Wednesday 22nd September, ko 7.30pm. The game will give opportunity for squad players to get some game time and some possible new players for manager Danny Kedwell. Bromley U23s/Development are a strong side and are managed by former Cray Wanderers player Steve Aris. 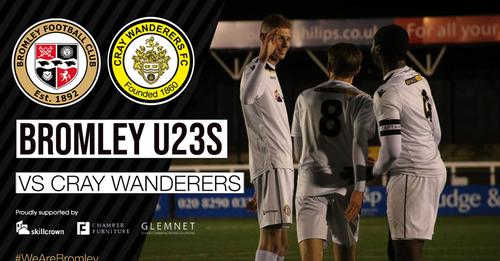 This match is open for supporters and ticket details can be found here with admission £3.00 and there will also be cash on the gate on the night.