Cray Wanderers made a couple of late Friday signings as cover for suspensions/injuries going into Saturday’s match at Carshalton Athletic.

Jephte  has been signed on loan from Leyton Orient as cover for the suspended Kellen Fisher and made a full 90 minutes debut at Carshalton Athletic on Saturday.  Jephte played superbly and made a big impression with the Cray Wanderers supporters.

Lambeth born Jephte came through the Leyton Orient youth system and made his first team debut in the EFL Cup last season as substitute against Southampton and also played at MK Dons later in the competition.  He made eight appearances on loan at Sutton Common Rovers from January 2022  before returning to Leyton Orient and made his league debut against Colchester United as substitute in March 2022.  Jephte along with Harrison Sodje signed professional forms with Leyton Orient in the summer and has recently returned to Sutton Common Rovers making a further eight appearances and scored a couple of goals.

Cray Wanderers are delighted to welcome central defender Tyreese Hesop to the club.  Tyreese was an unused substitute for Saturday’s trip to Carshalton Athletic.

Tyreese has most recently been at Chipstead FC where he made four appearances earlier in the season.  He came through the Dulwich Hamlet youth system up to u19 level and also a spell at Lewisham Borough.

We welcome Tyreese to Cray Wanderers and we hope enjoys his time with the club.

Also information about Cerny Ando who has been with the Wands since September and albeit briefly made his first Cray Wanderers league appearance as substitute at Carshalton Athletic after being on the bench for a number of games. 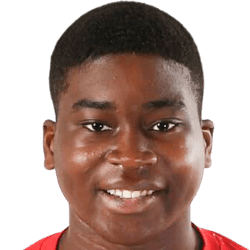 Defender Cerny arrived at Cray Wanderers in September following a spell at Met Police and made his Wands debut in the Kent Senior Cup tie at Sheppey United and the briefest of appearances as substitute at Carshalton Athletic on Saturday..

Cerny came through the youth system at AFC Wimbledon before moving up to Salford City where he played for the U18 and U21 teams before leaving at the end of last season.  French born Cerny moved to Met Police at the start of the 2022-23 season and was part of their reserve side before joining the Wands.