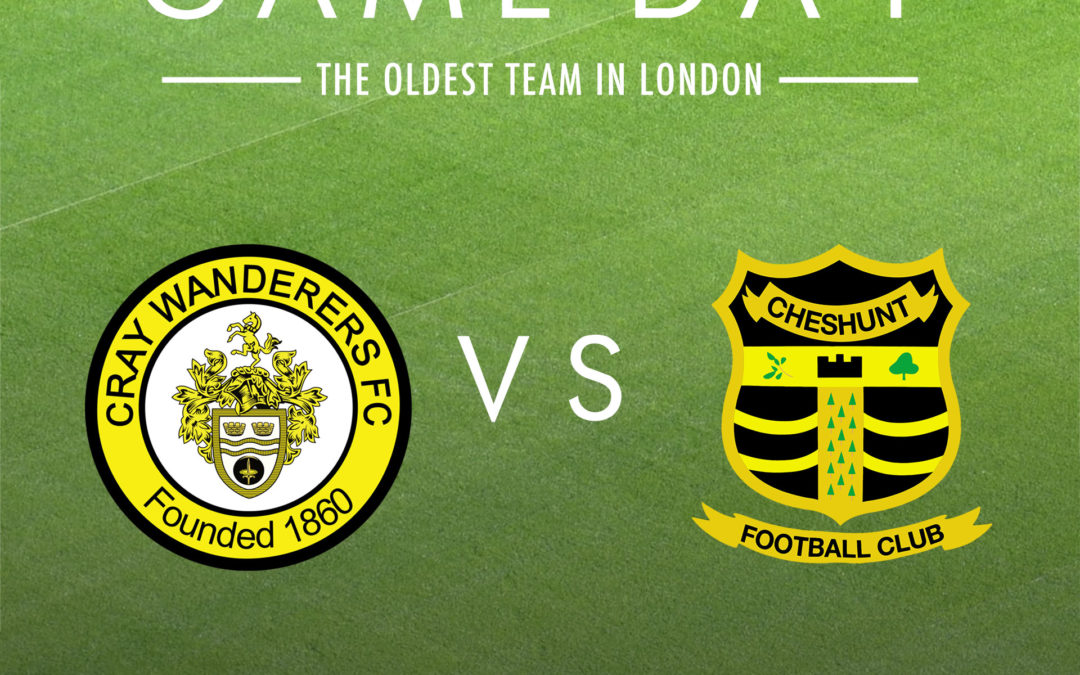 Cray Wanderers are back at Hayes Lane for the second home game of November on Saturday as Cheshunt travel down from Hertfordshire in a clash between two promoted sides from last season.  Kick off is 3pm.  On the eve of Remembrance Sunday there will be a period of silence to commemorate those that have lost their lives in wars and conflicts before the game. 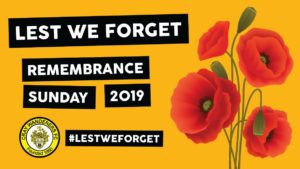 Cray come into the game without a win in three but unbeaten in the league for four games after the late drama last Saturday against Worthing brought about a point which was the least that Cray deserved for another good performance.

Cray went in front after half an hour through Joe Taylor’s superbly crafted goal, his sixteenth of the season and could have had a second before the break but Worthing fought back in the second half d looked to have won the game in injury time before even later, Ricky Aguiar’s own goal rescued a point for Tony Russell’s side. 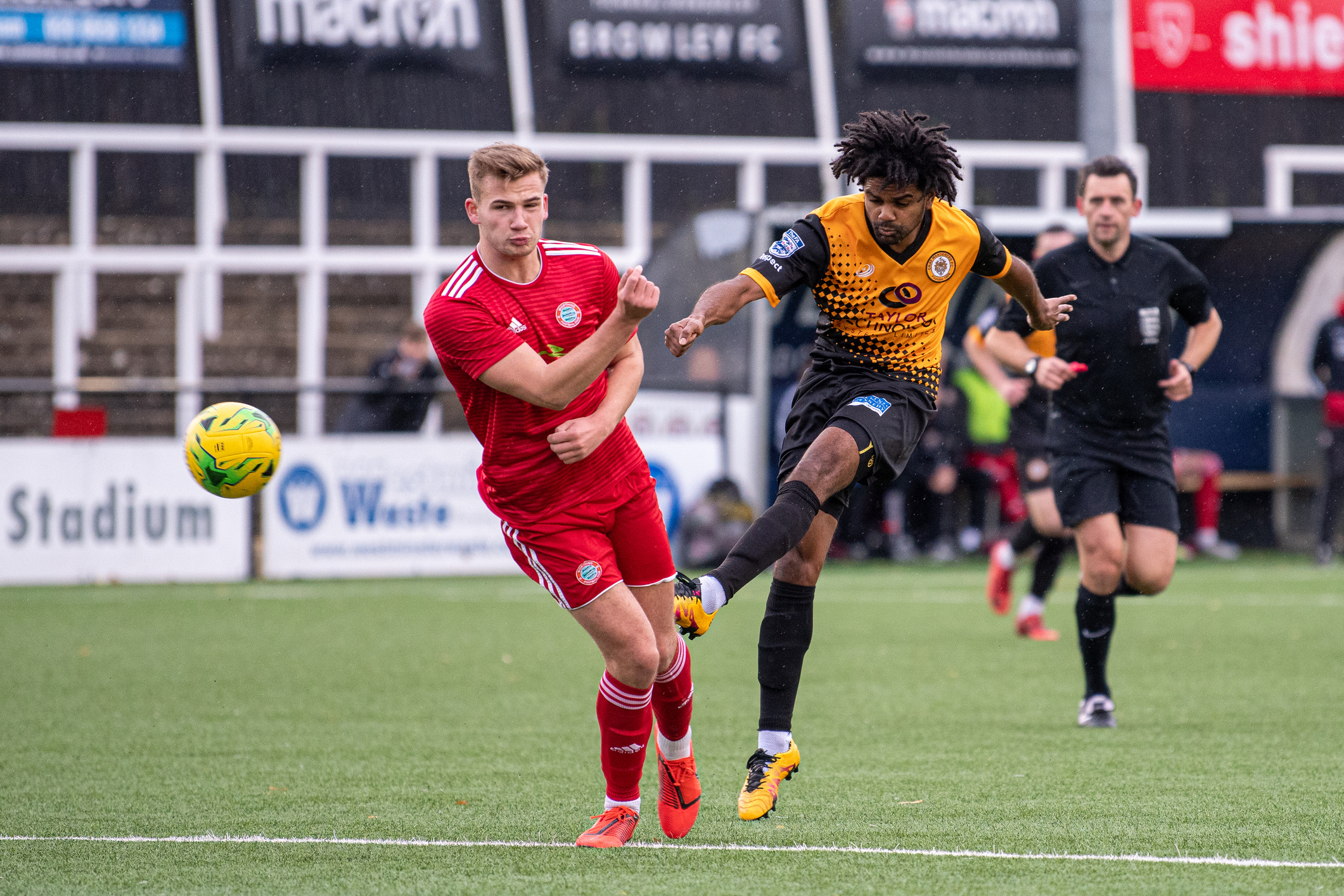 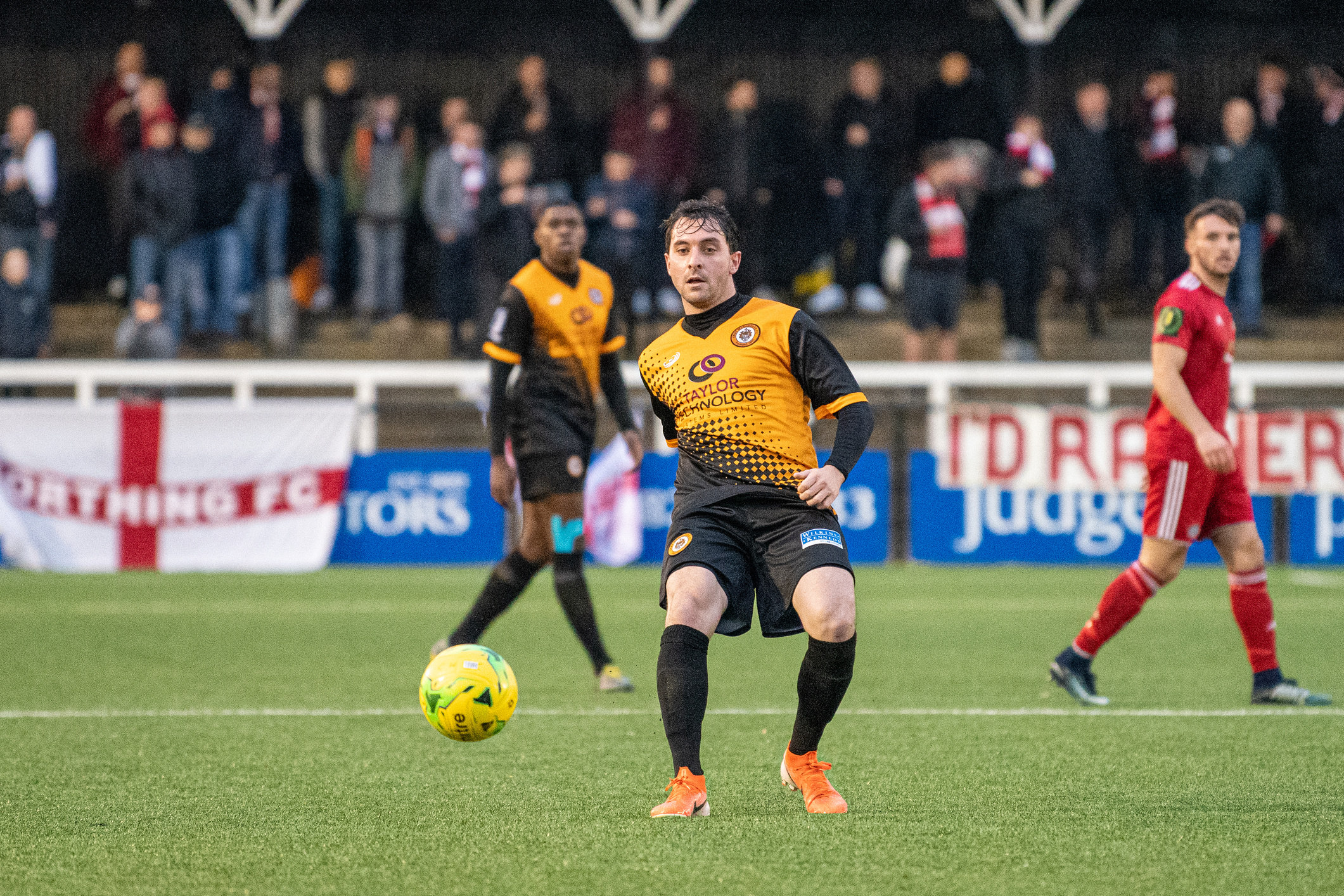 The down side to the game were the injuries to Tom Phipp (Hamstring) and Jerome Federico (hip-flexor) which will leave them on the sidelines for around 3-6 weeks along with Tom Murphy. Cray will hope to have Mitchell Nelson and Karl Dent available again following suspension for the Worthing game.  Since Saturday, Cray have looked to bring in a reinforcement out wide and Joel Rollinson has joined the club from League 2 Stevenage on a three months loan.  This followed a successful loan spell for Harry Hudson from Watford earlier in the season.

Despite the injuries during the season with Andre Coker and Jay Leader all earlier having time out Cray remain in 7th place in the league table three points off a playoff place and have certainly been involved in some cracking games in their return to the Isthmian Premier.

Saturday’s opponents Cheshunt like Cray are making a return to the Isthmian Premier after 5133promotion last season and in the Ambers’ case for the first time since 2004-05 after finishing third in the Isthmian South-Central Division.  Craig Edwards’ side defeated Marlow and impressively against Bracknell Town, 3-0 in the final to take their place in the Premier Division.

Cheshunt ended a run of six games without a win with a 4-0 win at Potters Bar Town in the Hertfordshire Charity Cup Quarter-Final on Tuesday with goals from Ibrahim Diallo, Sam Collins and Bobby Mills (2) as a new look side with seven new arrivals in the last week helped restore morale.

They are currently 18th in the league table with 10 points from their 14 league games.  Away from home they picked up three points at Bognor Regis Town (2-1) and were beaten in their other games at East Thurrock United (1-4), Bishop’s Stortford (2-3), Leatherhead (0-3), Folkestone Invicta (2-4) and Enfield Town (1-2). At home Cheshunt beat Potters Bar Town (2-0) and Wingate & Finchley (1-0) and drew with Corinthian Casuals (1-1). They were beaten by Haringey Borough, Margate, Horsham Worthing and last Saturday against Lewes (0-2). In the FA Cup Cheshunt advanced through two qualifying rounds at home to Stowmarket and Brightlingsea before losing 1-4 at Maidstone United.  In the FA Trophy Cheshunt lost 1-2 at home to East Thurrock United.

Going back through Cray’s long history the Wands and Cheshunt were regular opponents for seven seasons between 1955-56 to 1961-62 in the London League Division One and Aetolian Leagues.  The overall record against Cheshunt is P. 18 W10 D3 L5.  The last time the two sides met at Hayes Lane was on 21st November 2015 with Cray winning 2-0 with goals from Ben Hunt and Michael Frieter.  The corresponding game at Cheshunt in April 2016 saw Cray win 1-0 with a James Duckworth goal. 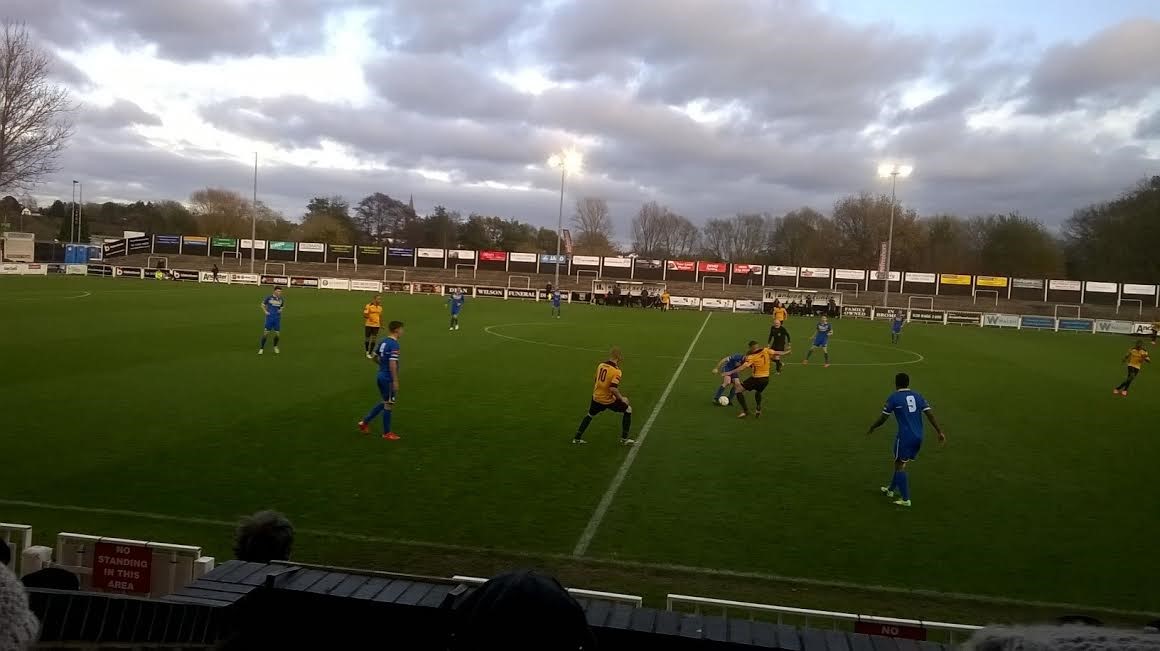 Cheshunt were formed in 1946 after the original Cheshunt club disbanded in 1931.  They  moved through a number of leagues but met Cray in the London League Division One from 1955-56 and were involved in many high scoring games and later joined the Aetolian League, Spartan and Athenian Leagues before joining the Isthmian League in 1977 and in 1986-87 were relegated to the Spartan League.  In 1992-93 they were promoted back to Division Three of the Isthmian League and in 2003-04 won promotions to the Premier Division.  They were moved to the Southern League Premier for 2005-06 and after relegation in 2007-08 they moved back to the Isthmian North Division where they met Cray again in competition for two seasons.  They were relocated to the newly formed South-Central Division for 2018-19 and were promoted last season via the playoffs.

This should be another entertaining game and admission costs are £10.00 adults, £5.00 concessions but don’t forget the Football For A Fiver offer for season ticket holders of Premier League, EFL & National League clubs.  There is so much happening over the weekend in the FA Cup and FA Trophy but Cray Wanderers games are not to be missed and should be another great occasion. 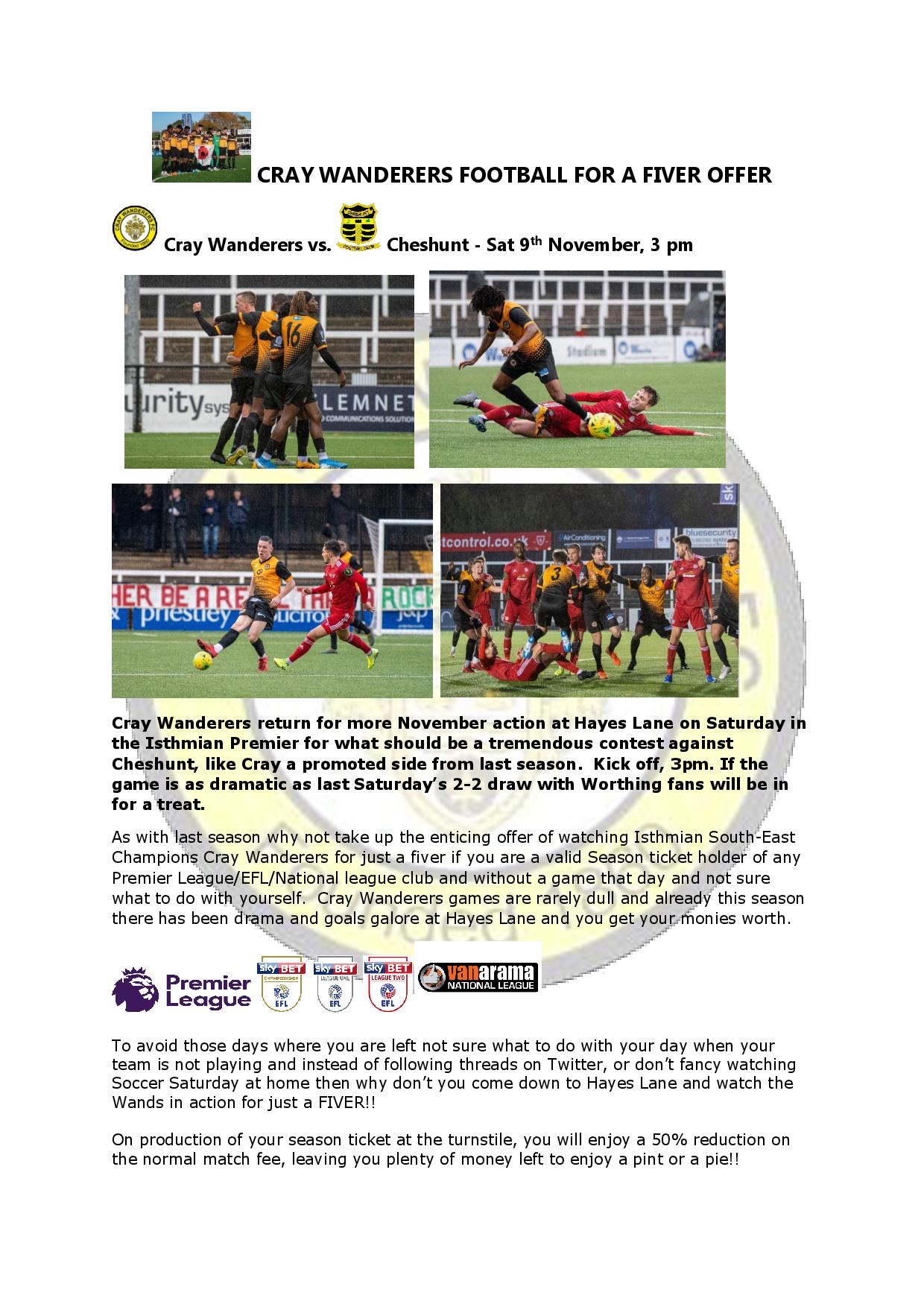