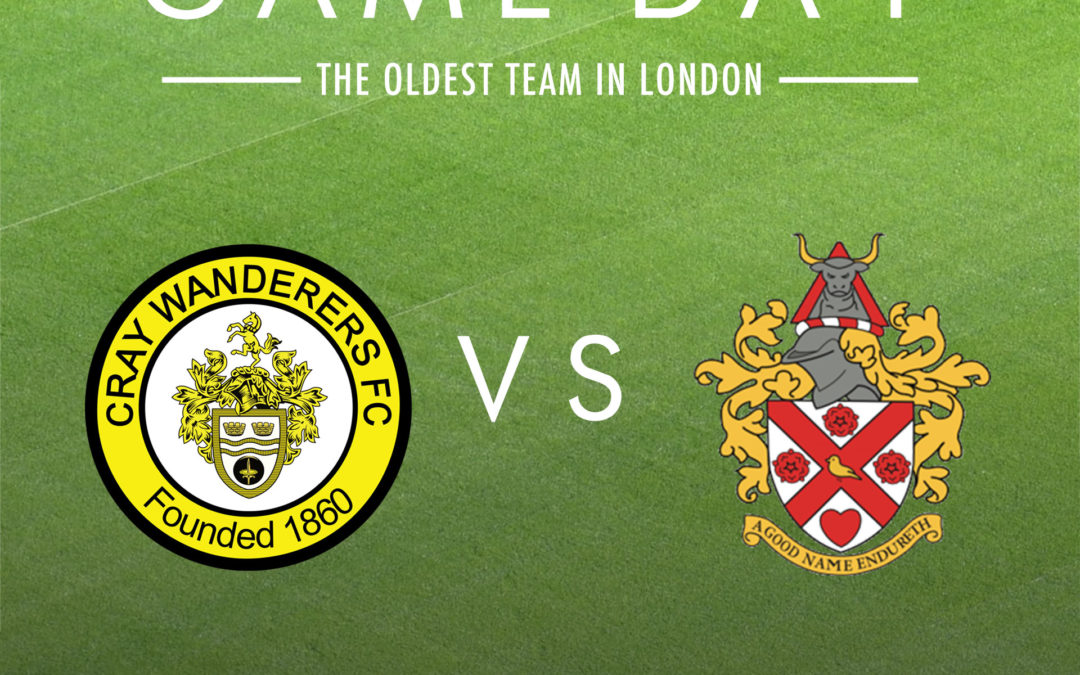 There’s midweek league action for Cray Wanderers on Wednesday night as Hornchurch are the visitors to Hayes Lane for the final midweek home game of the season. Kick off is 7.45pm.

The match sees Cray face the only team of the 21 in the Isthmian Premier they have yet to play this season and has significance at the top of the table as 6th placed Cray face 5th placed Hornchurch with both on 41 points although Hornchurch have only played 20 matches.

Both teams had differing results on Saturday with Cray showing great resolve and character to come from a goal down to win 2-1 at Bowers & Pitsea.  Meanwhile, Hornchurch’s fine run in the FA Trophy came to an end at home as Isthmian North Aveley upset the Urchins with a 2-1 win despite Chris Dickson’s 21st goal of the season.

Cray have made an unbeaten start to 2020 and did well to win at Bowers & Pitsea against a side in good form who led at the break. The Wands though were very patient and as the game opened up, a clinical finish from Joe Taylor, his 27th goal of the season and then a debut strike in the last minute from Rhys Murrell-Williamson gave the Tony Russell’s side the win.  This also took Cray above the 40 point barrier as early as January which was the minimum requirement at the start of the season and to remain in the division. 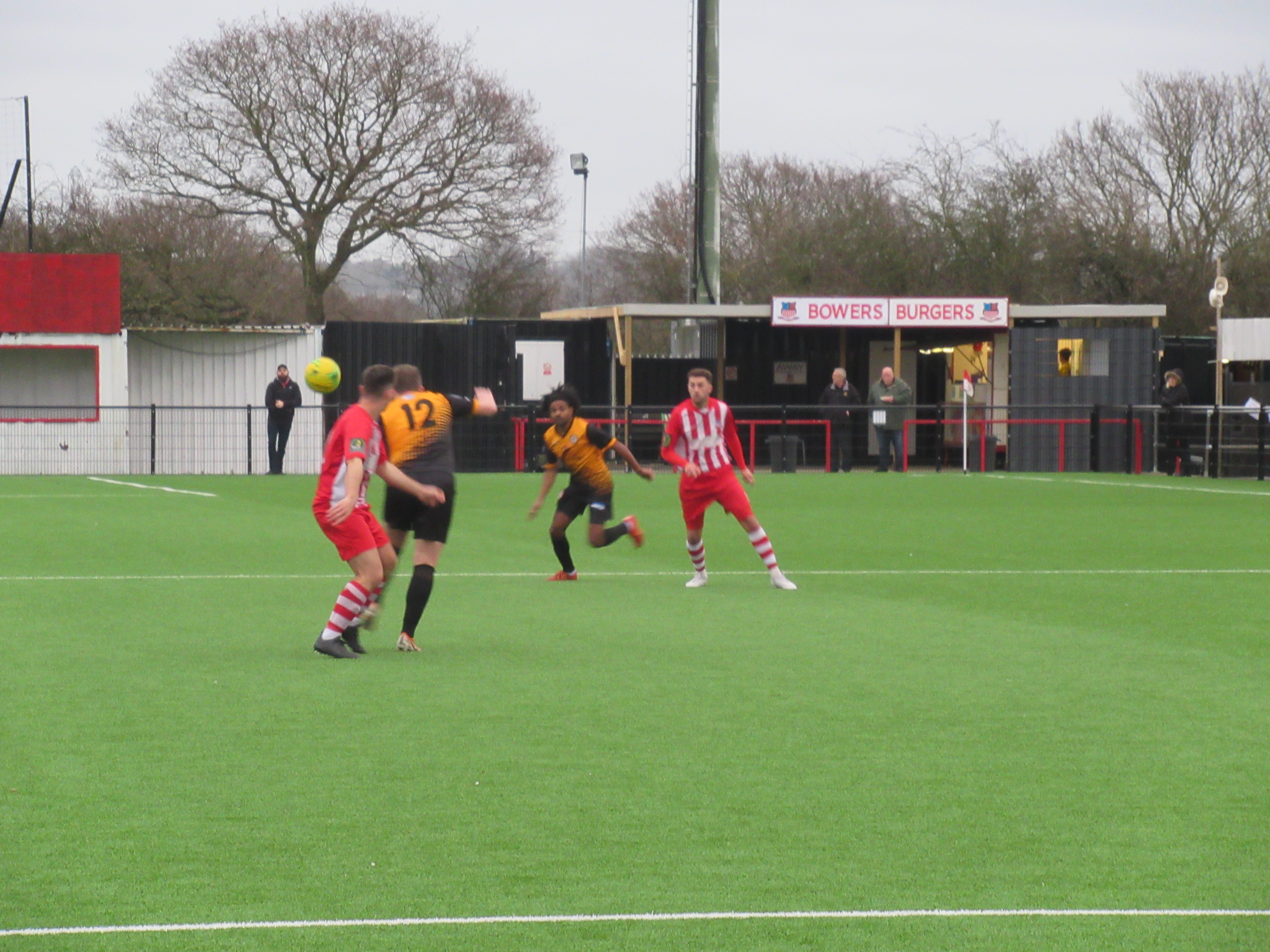 There were positives especially in the way Cray finished the match, with good energy and Taylor’s performance was that of a classic centre-forward while Bradley Pritchard was superb once again in midfield and Murrell-Williamson showed what he can offer with a fine individual goal which helped turn one point into three. 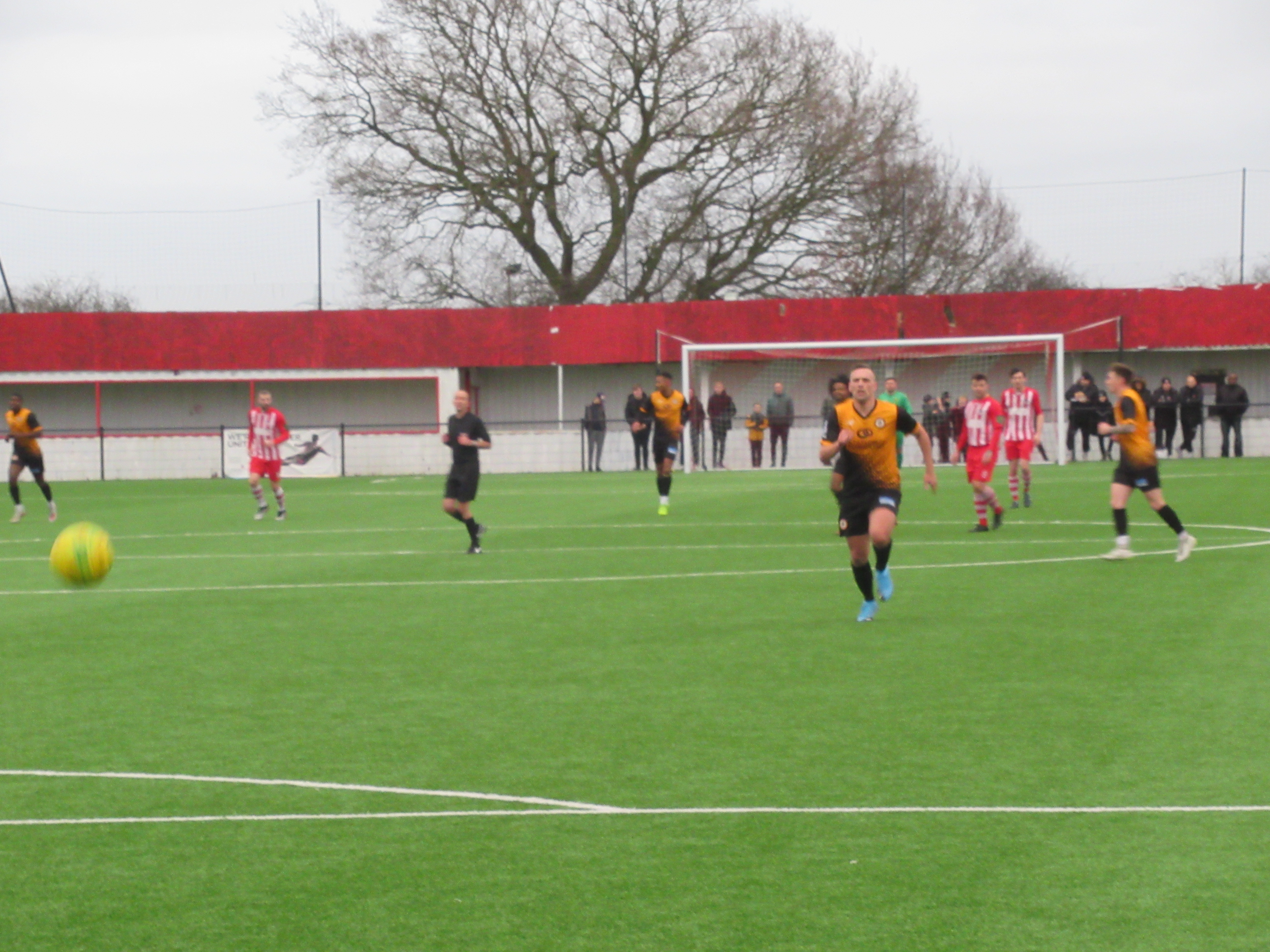 However, Cray will be severely tested by a very good Hornchurch side who have been in and around the top 5 for the majority of the season.  They are unbeaten in their last eight league games since an October defeat at Leatherhead although much of that time since was taken up by the FA Trophy run.  Away from home, Mark Stimson’s side won at Merstham (2-1), Worthing (6-0), Carshalton Athletic (4-1) and Wingate & Finchley (3-2). They picked up points from draws at Enfield Town (1-1) and Haringey Borough (1-1). Their only defeats came at Brightlingsea Regent (0-1), Horsham (0-1) and Leatherhead (1-2).

At home their record has been excellent and are unbeaten in the league with the Aveley result the only real blip.  They beat Kingstonian (3-0), Wingate & Finchley (2-0), Bishop’s Stortford (4-0), Folkestone Invicta (1-0), Bowers & Pitsea (2-1), Potters Bar Town (3-1), Brightlingsea Regent (3-0) and Horsham (2-1). They drew at home to Margate, Corinthian Casuals and Bognor Regis Town.  The FA Trophy run saw them beat Berkhamsted, away to Basildon and then a penalty shoot-out victory in a replay against Oxford City and then beat Dulwich Hamlet in the 1st Round Proper.

Matches between the sides were not common until the new millennium with Cray winning a London Senior Cup tie 2-1 at Hayes Lane in October 2001. Then the sides met in the Isthmian League 10 times with Cray winning four and Hornchurch six times with the sides yet to draw.  The last time the two teams met at Hayes Lane was on 6th October, 2015 with Hornchurch beating a rather depleted Cray side 2-0 with goals from Dave Collis and Tobi Joseph.  Tony Russell’s first game in charge of Cray Wanderers was at Hornchurch in August 2015, where Andre McCollin’s goal gave Cray the lead but Hornchurch came back to win 2-1 with goals from George Purcell and a deflected injury time free kick from David Knight.  Perhaps Cray’s finest results against Hornchurch were away wins, 2-0 in September 2009 where Ross Lover and Mark Willy scored, 2-1 in March 2012 with goals from Leigh Bremner and Joe Vines, a season in which Hornchurch were promoted.  The last Cray win against Hornchurch was an unexpected one, 2-1 in March 2014 with Adrian Stone and Paul Vines scoring in a season where Cray were relegated and Hornchurch reached the playoffs. 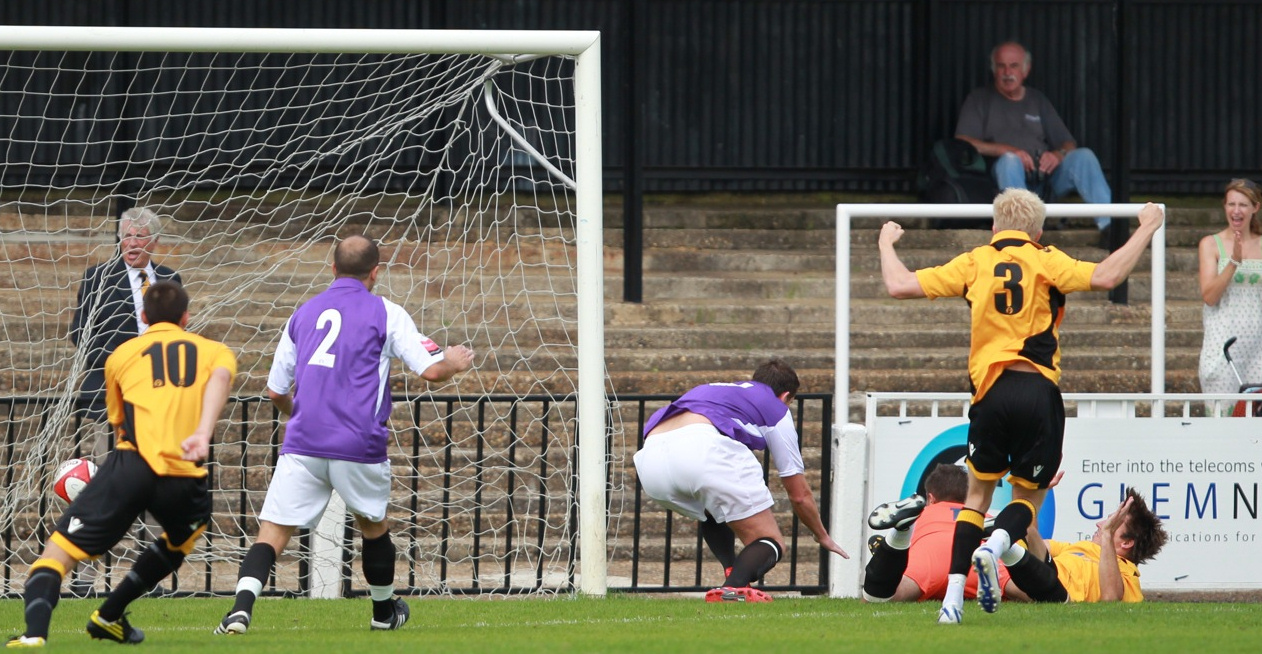 Hornchurch FC were formed in 1923 as Upminster Wanderers and worked their way through local, Spartan, Delphinian and Athenian Leagues, moving to the Isthmian League in 1975.  They earned a number of promotions and relegations and had back to back promotions from Division Three in 2001-02 and Division Two the following season.  In 2003-04 they reached the 2nd Round of the FA Cup losing to Tranmere Rovers and finished 5th in the Premier and were re-located to the Conference South following league restructuring.  Despite their new lofty status the club suffered financial problems and folded.

They re-emerged and re-booted as AFC Hornchurch in the Essex Senior Premier and won the league at the first attempt and then back in the Isthmian North in 2006-07 won the title to return to the Premier.  In 2007-08, Hornchurch finished 4th and lost to AFC Wimbledon in the playoffs. From the 2009-10 season, they met Cray in league competition for the first time and in 2011-12 finished 2nd and beat Bury Town and Lowestoft Town to earn promotion back to the Conference South.  They remained there one season before relegation and in 2013-14 reached the playoffs once again this time losing to Lowesfoft in the final.  Perhaps surprisingly, they were relegated the following season to the North and met Cray once again.  For three seasons they were contenders and in 2015-16 and 2016-17 reached the playoffs each time losing to Thurrock. However, in 2017-18 they won the Isthmian North in some style to return to the Premier where last season they finished in 15th place.

This should be a great match and with not much else going on football wise locally, a chance to see some top class football between two good footballing sides.  Admission costs are £10.00 adults, £5.00 concs/u16s while Premier League/EFL/National League season ticket holders can attend for £5.00 on presentation of a valid ticket.  Games under the lights at Hayes Lane are always special occasions and this promises to be another. 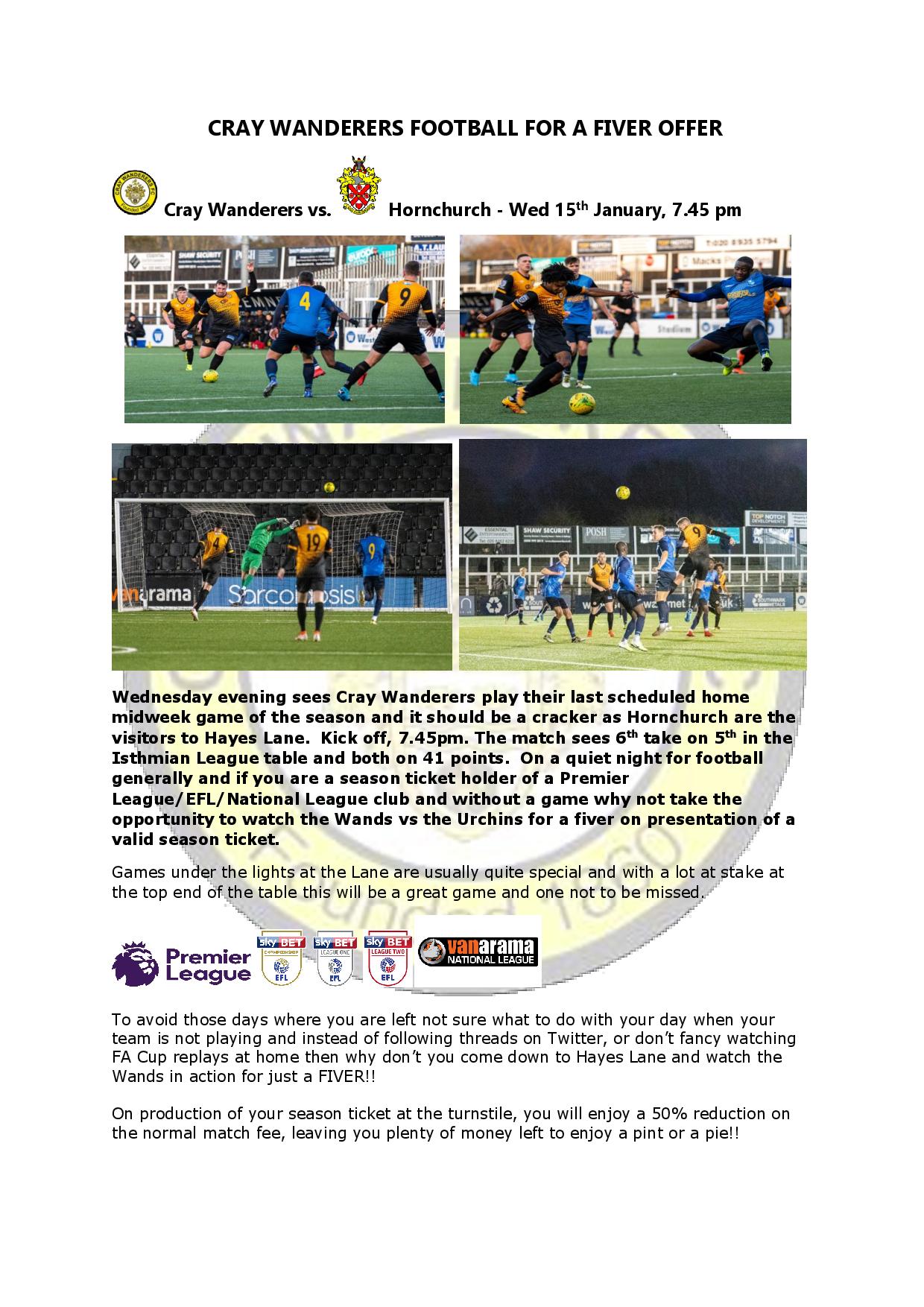