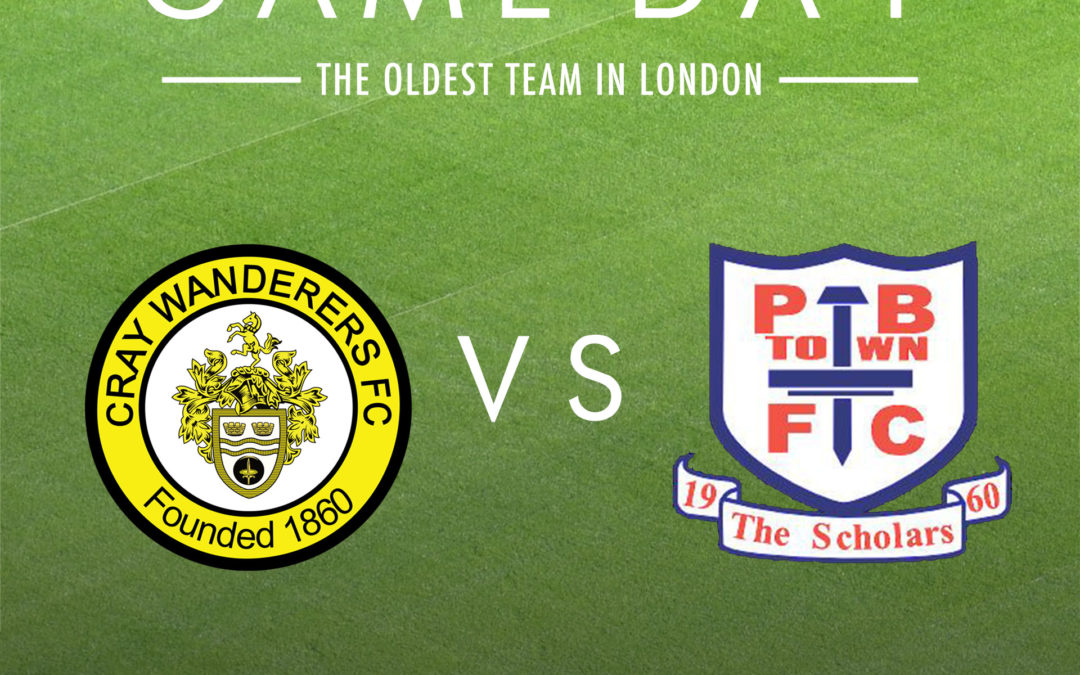 Cray Wanderers return to action at Hayes Lane after a four week absence on Saturday as Potters Bar Town make their first ever visit to the Wands.  Kick off is 3pm in Cray’s last home game before Christmas.

Cray will be looking to bounce back from last Saturday’s defeat at Carshalton Athletic which was their first defeat in seven league games.  Despite the 0-4 scoreline Cray had their moments in the game and contributed greatly to a good match. 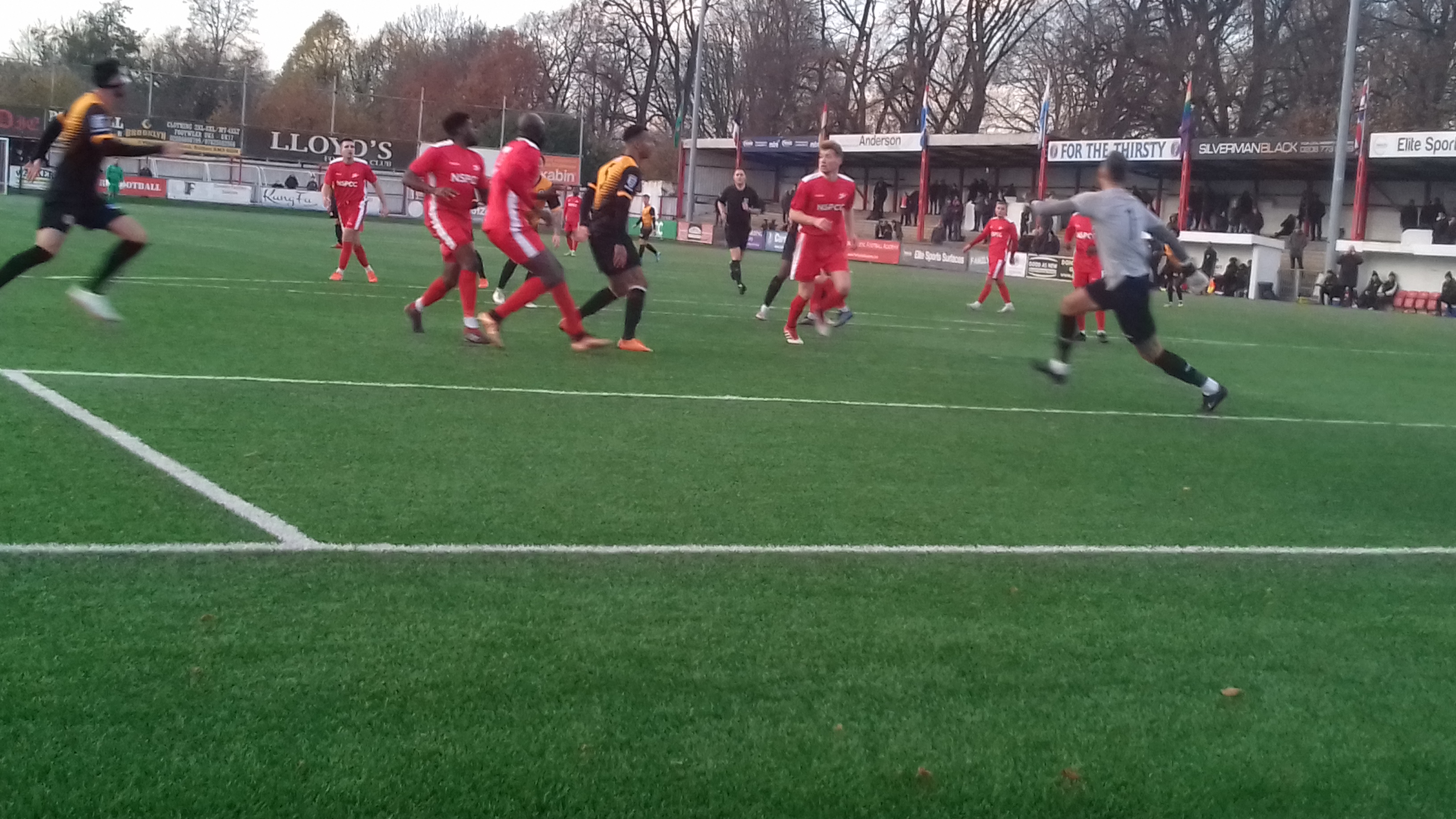 The Wands who are seventh in the Isthmian Premier league table are only seven points off the top and have the leading scorer in the Division with Joe Taylor who has 15 goals in the league and 21 in all competitions.  Other pluses for Tony Russell from last Saturday were the return from injury for both Tom Murphy and Jerome Federico who made lively substitute appearances.  The main scare was for Barney Williams who in his 100th game picked up an eye injury in the match and remains to be seen if he has recovered sufficiently for Saturday. Tom Phipp’s hamstring injury means he is likely to be out possibly until January. 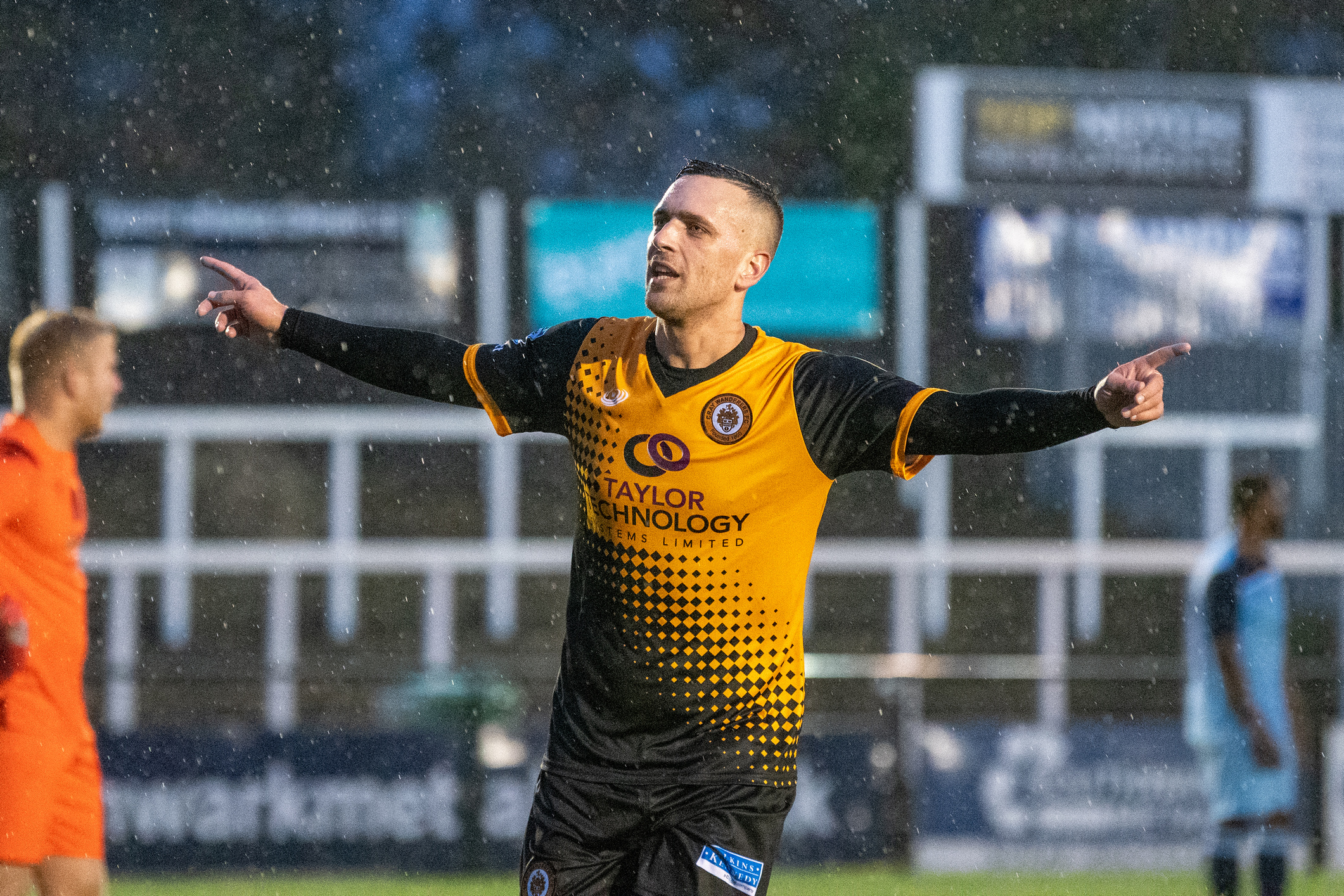 Despite the defeat morale and belief are still both high and after a run of six away games out of the last eight matches a return to Hayes Lane is welcome before two more away fixtures during December to come at Bognor Regis Town (14th December) and at Worthing in the Isthmian League Cup (21st December) before returning to the Lane on Boxing Day for the visit of Leatherhead.

Potters Bar Town have made a solid start to the season and lie 12th in the table with 24 points.  Lee O’Leary’s side bounced back from a home defeat to Bowers & Pitsea last Saturday by beating Brightlingsea Regent 4-2 at home on Tuesday night with Josh Hutchinson scoring a hat-trick taking his tally to the season to 12 in the league.

The two sides met for the very first time at Potters Bar Town on 31st August and a hard fought game came alive with two goals in the closing minutes with Bradley Sach putting Potters Bar ahead but Joe Taylor earned a point for the Wands with a leveller seven minutes into added on time. 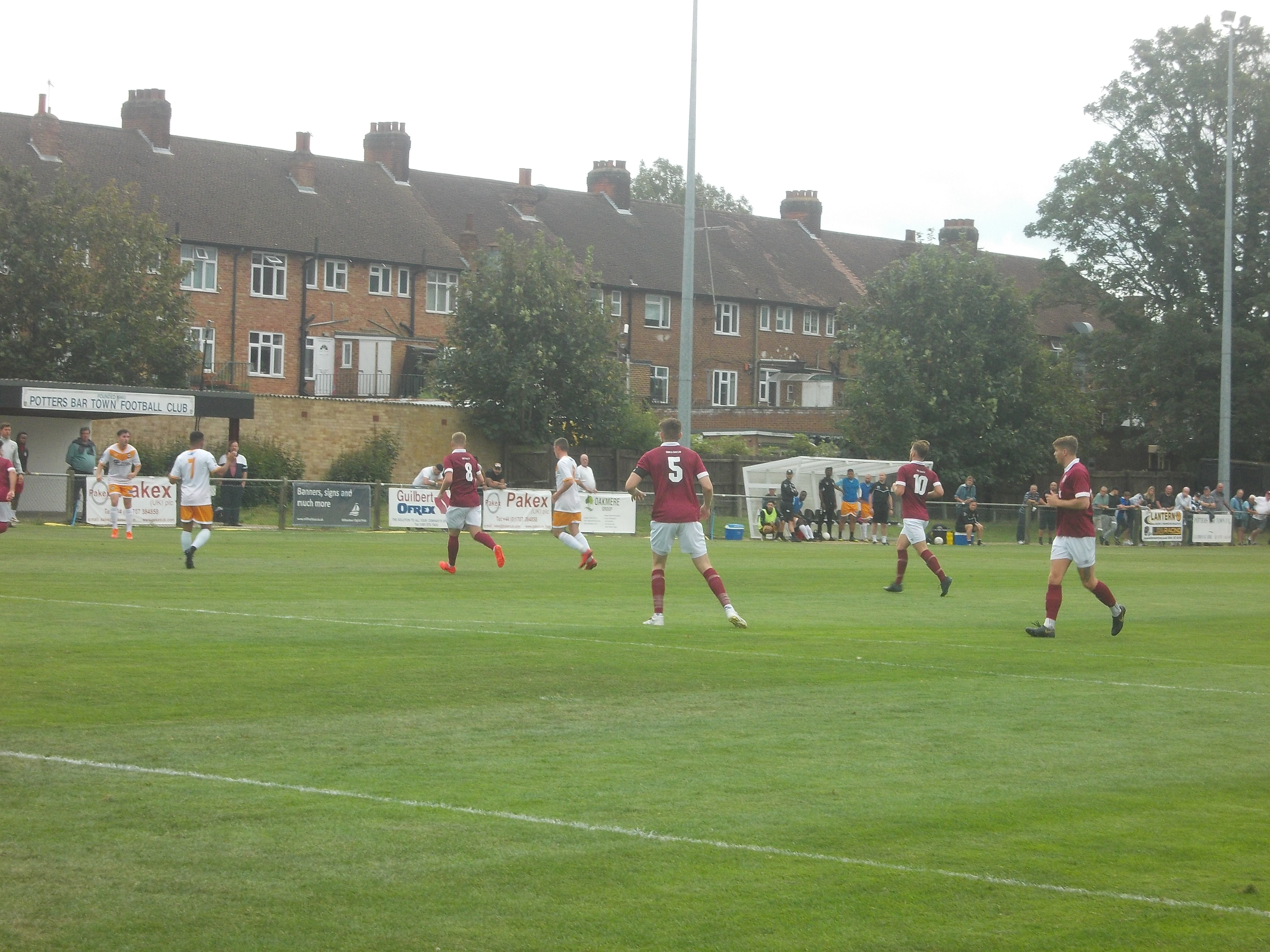 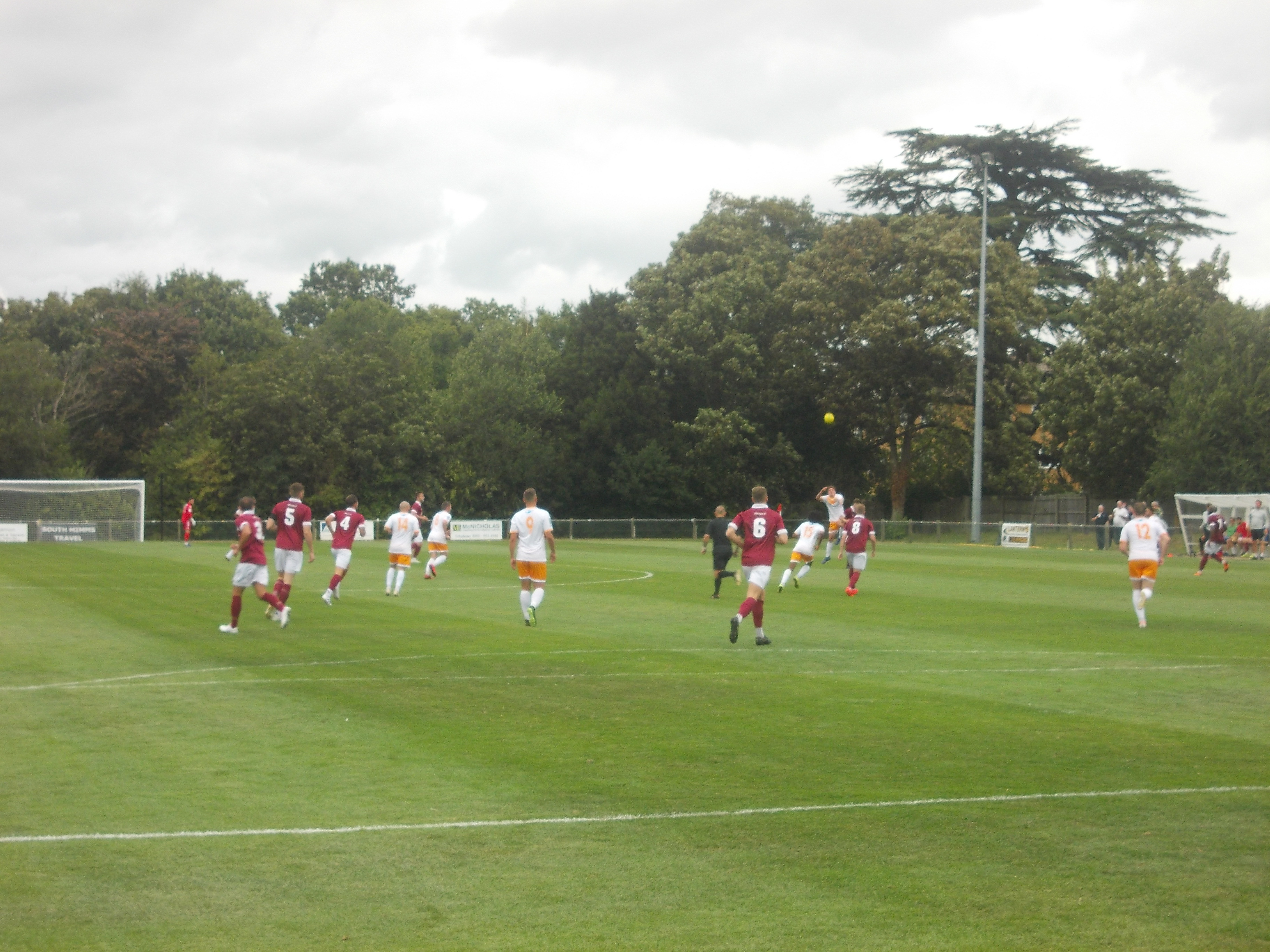 Away form for Potters Bar Town has been pretty decent with wins on the road at East Thurrock United (3-1), Bishop’s Stortford (4-1) and Bognor Regis Town (4-0). They also drew at Enfield Town (2-2), Lewes (3-3), Corinthian Casuals (0-0) and Margate (2-2). Their only defeats came at Cheshunt (0-2) and Hornchurch (1-3).  At home Potters Bar defeated Carshalton Athletic (2-0), Merstham (2-1) and Brightlingsea Regent (4-2) and drew with Cray Wanderers and Worthing. They were beaten at home by Folkestone Invicta, Horsham and Bowers & Pitsea.

Potters Bar Town had a good run in the FA Cup and reached the 4th Qualifying Round after beating Takeley, Hornchurch and Ware which set up a local derby against National League Barnet and were only beaten (1-3) after a replay.  In the FA Trophy, The Scolars advanced past Heybridge Swifts in the 1st Qualifying Round but lost at Cinderford in the next round.

Potters Bar Town were formed one hundred years after Cray Wanderers in 1960 and were known as Mount Grace Old Scholars after a team was set up for ex-Mount Grace School pupils until 1991.  They spent their early existence in the Hertfordshire County League Division One and in 1981-82 were promoted to the Premier Division.  In 1991 after being promoted to the South Midlands League Premier and in 1996-97 to the Spartan South Midlands Division North where they came second and the Quarter Finals of the FA Vase.

In 2004-05 the club were promoted from the South Midlands Premier and into the Southern League Division One East where they spent one season before being moved to the Isthmian North for 2005-06.  They remained there before being moved back to the Southern League Division One Central for a couple of years thereby missing Cray Wanderers in the Wands two season stay in the North.  They returned to the North and were promoted in 2017-18 behind champions Hornchurch and in their first season in the Isthmian Premier finished in a respectable 16th place.

This is the last home game before Christmas and a chance perhaps to put a halt on Christmas shopping for a short while and enjoy the company of the Wands.  Admission prices are £10.00 adults, £5.00 concessions/U16s but don’t forget the Football For A Fiver offer for season ticket holders of Premier League/EFL/National League clubs on presentation of valid ticket. 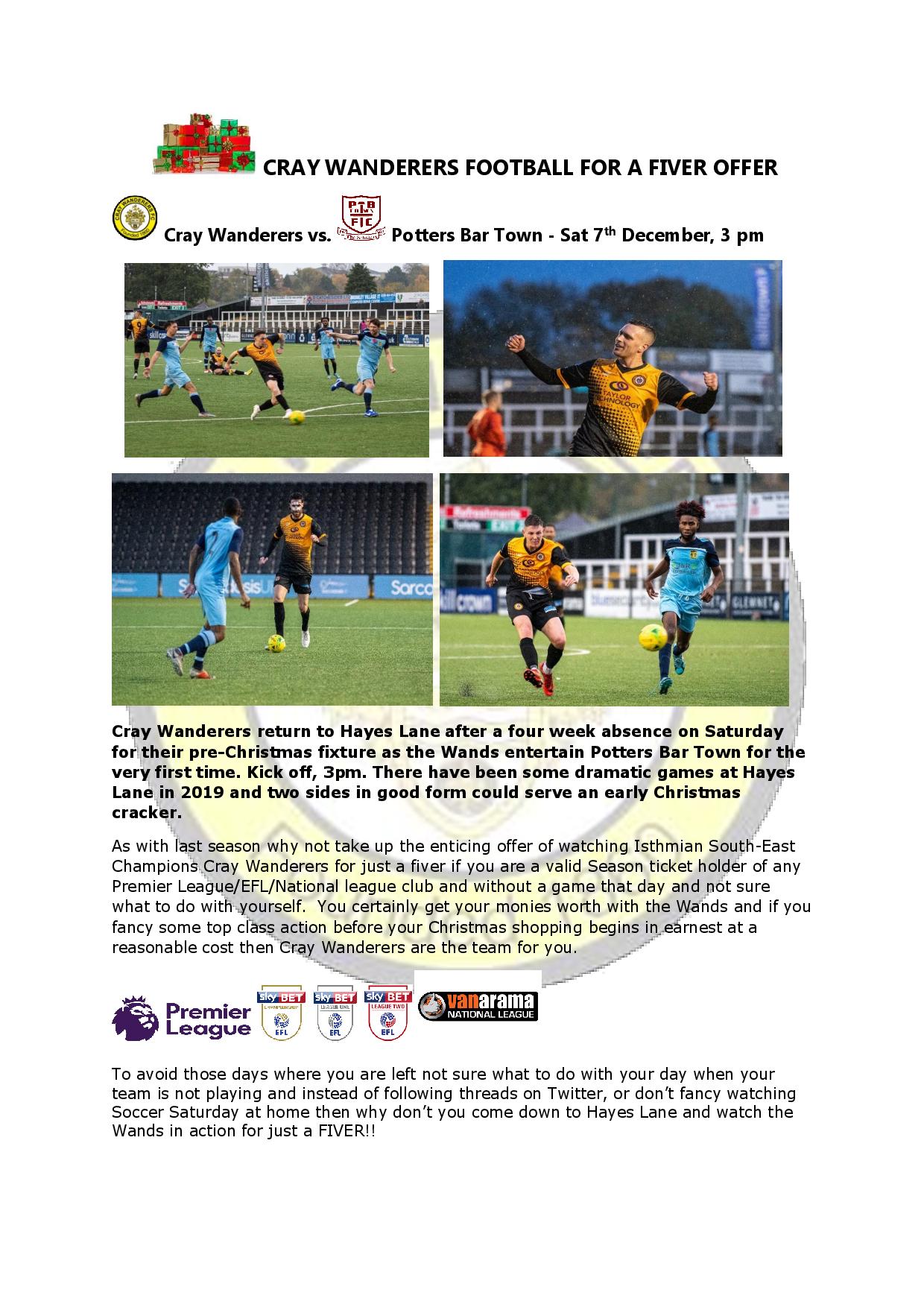