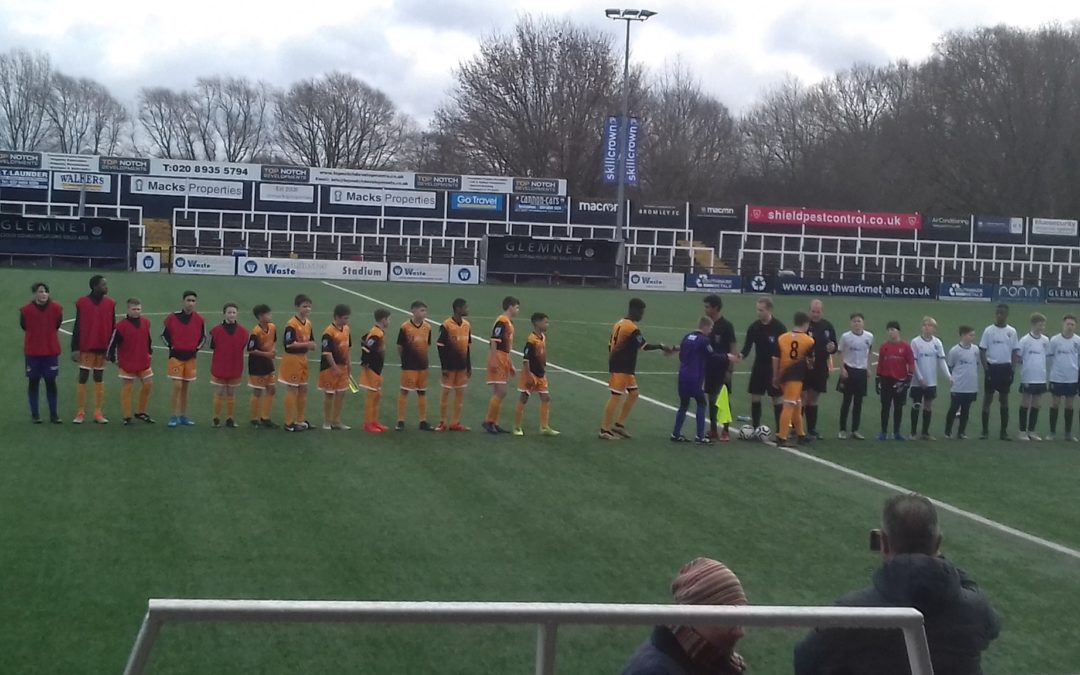 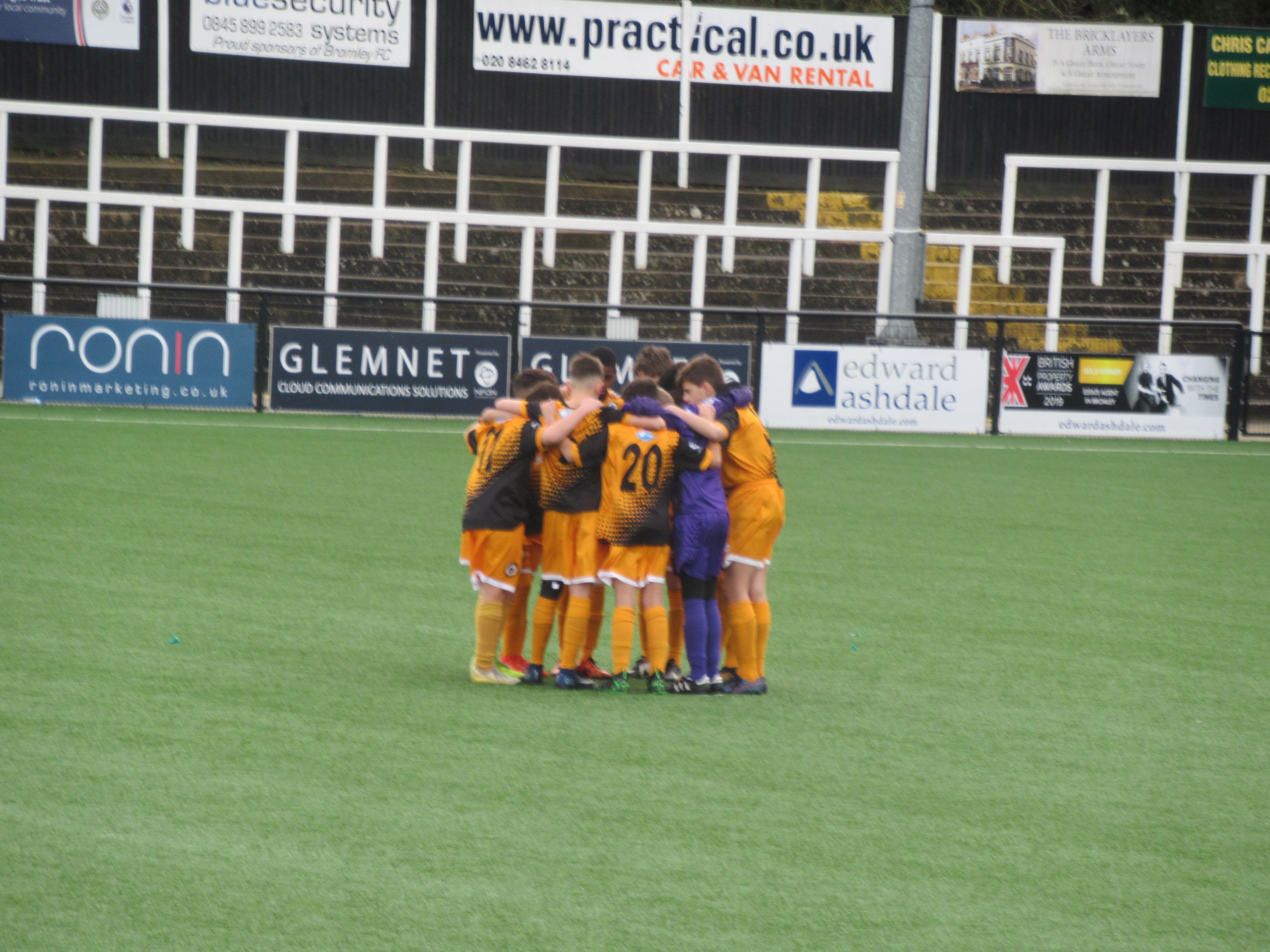 The Cray Wanderers U13s remain on course for a unique treble and made it through to their second cup final of the season after a dramatic and absorbing morning saw Cray advance past Bromley on penalties after a 3-3 draw and extra time.  The Wands will now face Maidstone United in the Final along with the KYL Cup Final against Erith & Belvedere at Maidstone on 12th March. 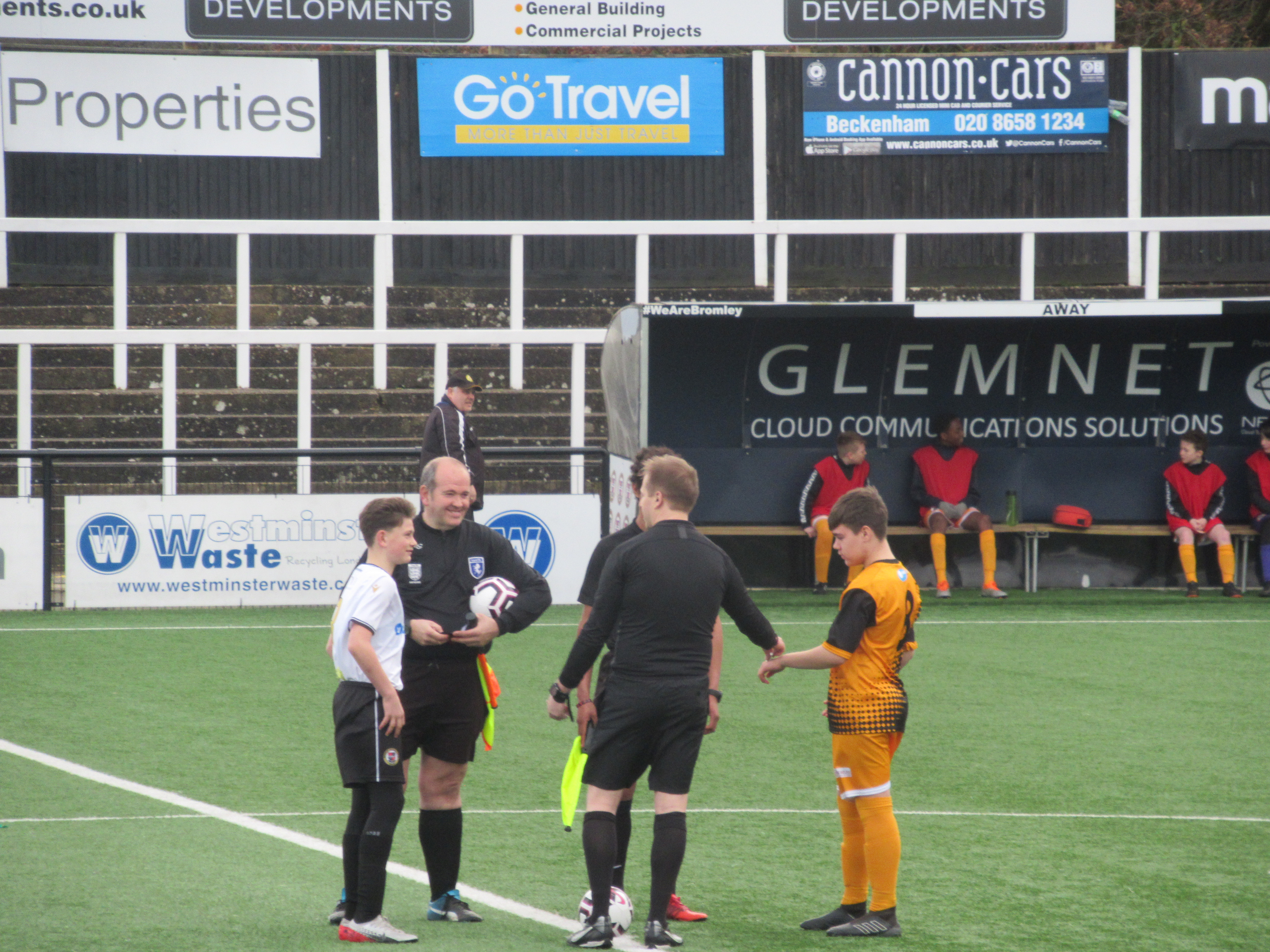 In a match of great quality from both sides, Cray twice led in the first half through Kieran Fowler’s shot from 25 yards and Michael Ihiedi glancing home a corner but Bromley quickly levelled each time.  The second half saw Bromley start with purpose and went in front six minutes into the half but three minutes later it was back all square when Ihiedi scored his second after skilfully taking the ball round the keeper and slotting home.  Both sides had chances with Callum Redman twice clearing off the line and also Joseph McCallum to deny Bromley goals but after ten minutes extra time both sides couldn’t be separated.    So it went to penalties and both sides converted their first four penalties each but then Harry Haines saved the vital fifth Bromley penalty which left Zuriel Elueme to slot home the winning penalty to win an epic match. 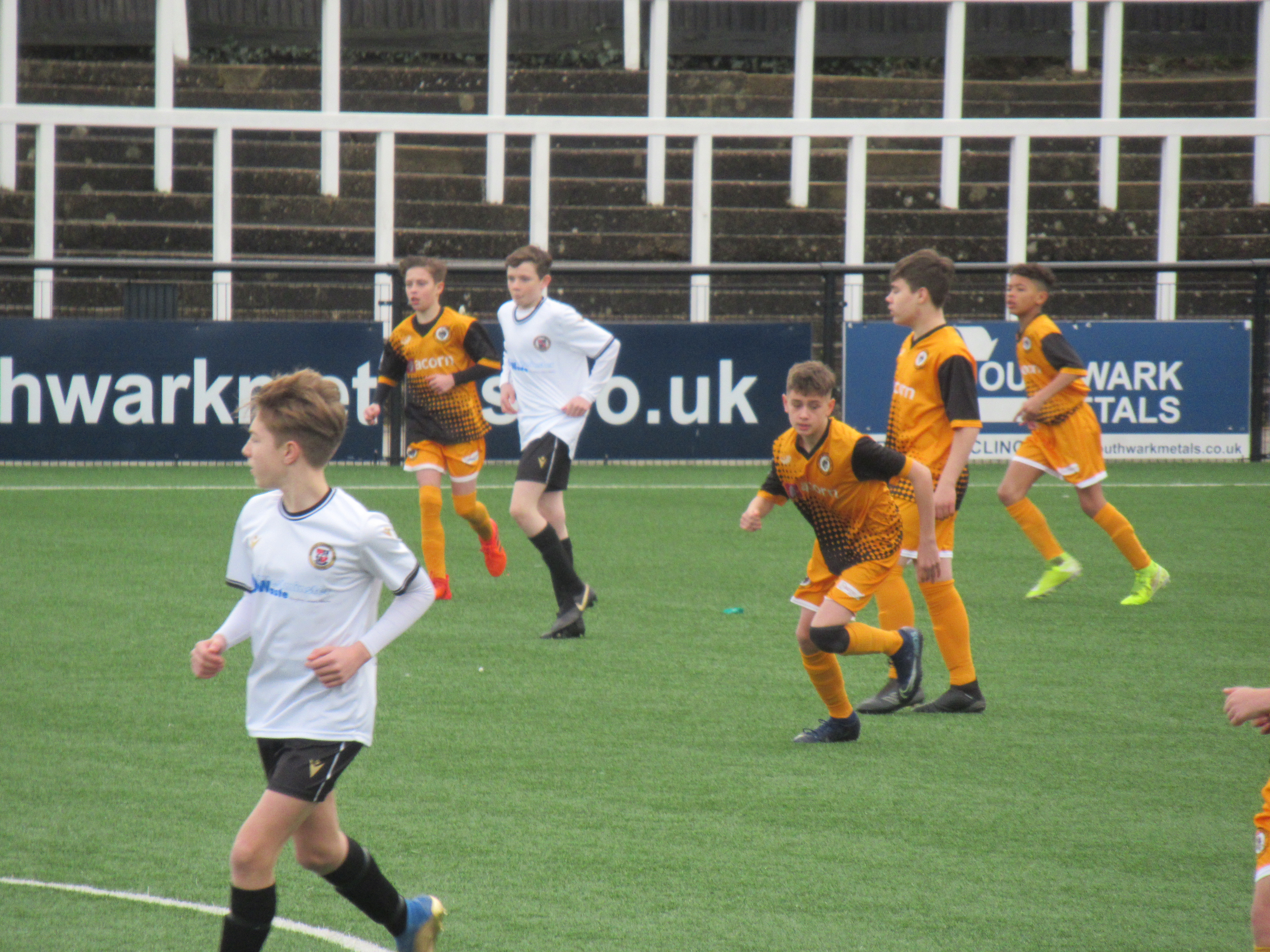 In front of a large crowd  and on the main pitch at Hayes Lane the expectation of a great game was there for all to see and they certainly weren’t disappointed as the two teams showed no sign of nerves and played some excellent football.

Cray started the game well and were the better side for the opening stages.  They came close when a free kick was awarded following a foul on Sam Hards.  From the free kick, Oliver Perkins curled the ball round the wall which the Bromley keeper had to adjust his feet to push the ball over the bar for a corner. 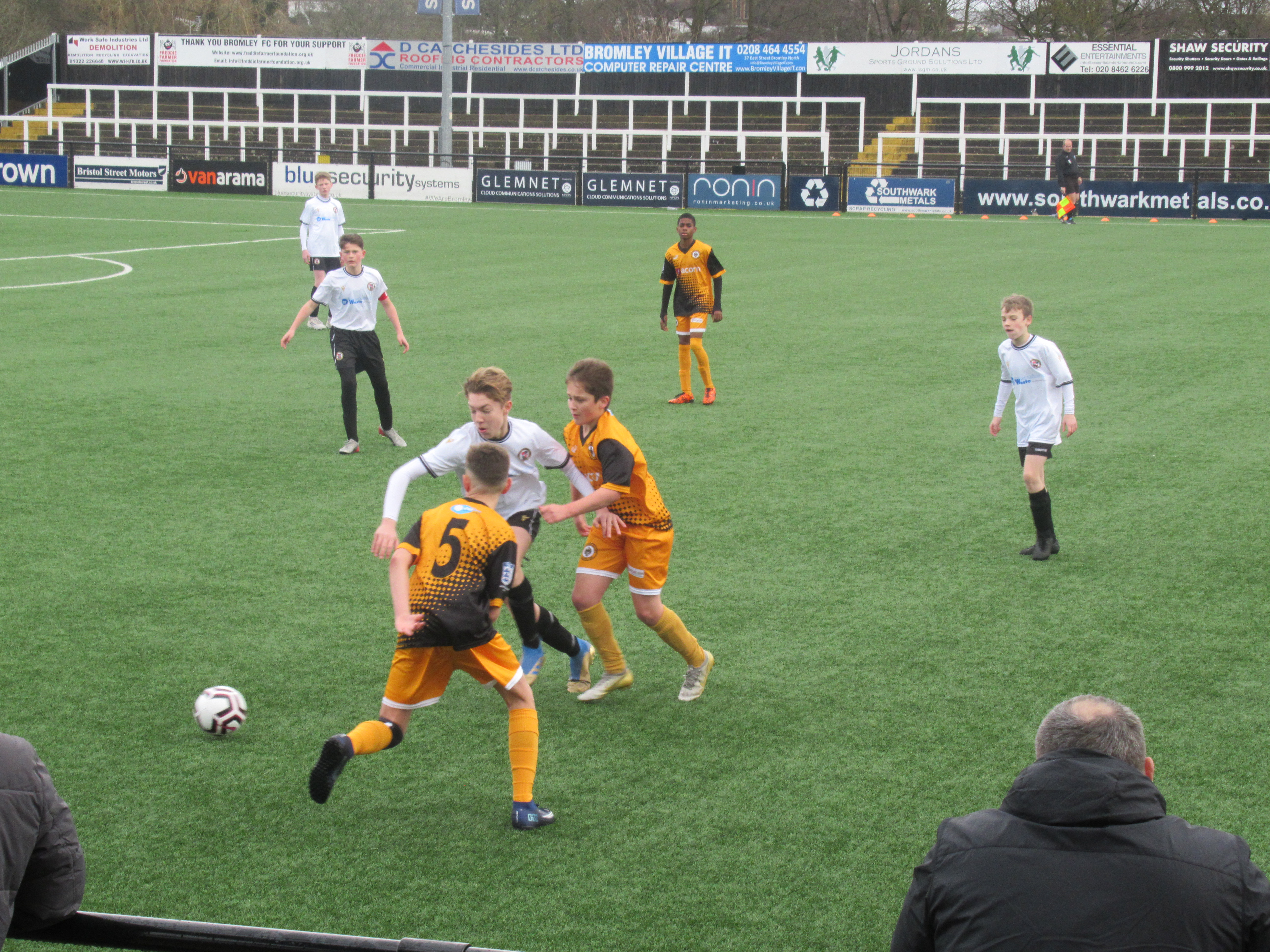 In the 11th minute Cray took the lead when following a short corner  the ball eventually was worked down the right out to Kieran Fowler who from 25 yards hit a low shot which evaded the keeper and Cray had a lead they deserved at that stage.

However, the lead didn’t last long as three minutes later, Bromley wer back on terms when a fine ball through found the no 18 down the left of the area and did well to find space and fire past Harry Haines to tie up the game. 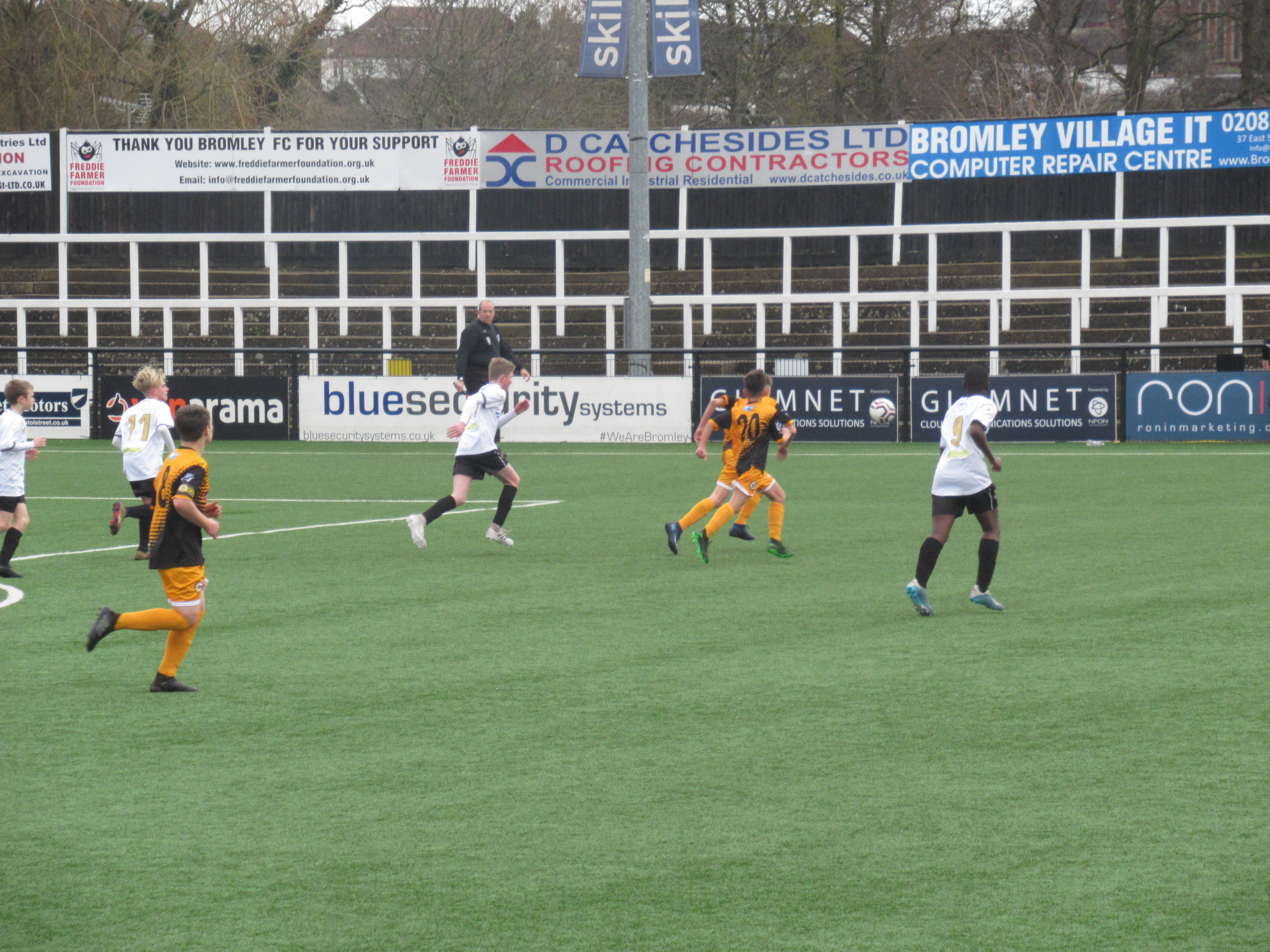 Cray went back on the attack and Fowler volleyed over the bar, then was provider for Perkins who shot wide of goal.  Then a mistake at the back by Bromley saw Hards presented with the ball and from just inside the area shot over the bar.

In the 28th minute Cray went back in front when after winning a corner down the left, Perkins ball into the box was hard to defend against and Michael Ihiedi got a glance to the ball and steered the ball into the net possibly via a defender. 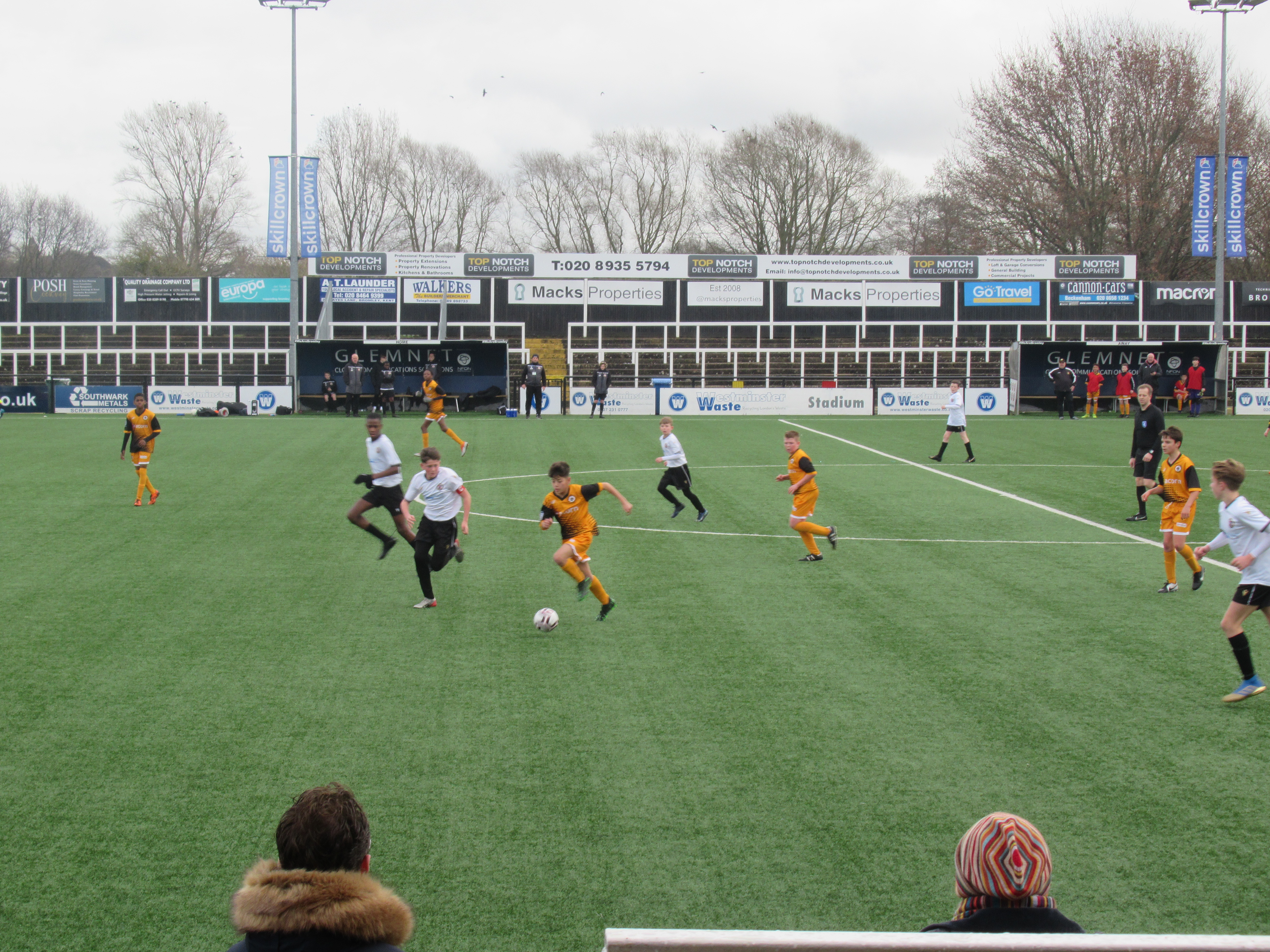 Two minutes later though Bromley showed they had great character and got back into it with a cracking strike from the no 11 who rifled in a shot from 25 yards which flew into the net.

Before half time both sides had one good chance each.  Cray had an opportunity when Perkins down the left put over a cross towards the far post which was turned over the top by Zuriel Elueme.

Then at the other end, Bromley almost took the lead when the no 18 found the no 9 who took the ball around Haines but his goal bound shot was cleared off the line by Callum Redman.

The early stages of the second half promised much of the same although Bromley looked to have the better of the opening exchanges.  Firstly they were awarded an indirect free kick for a back pass being handled inside the area and the no 15’s shot was deflected behind for a corner. 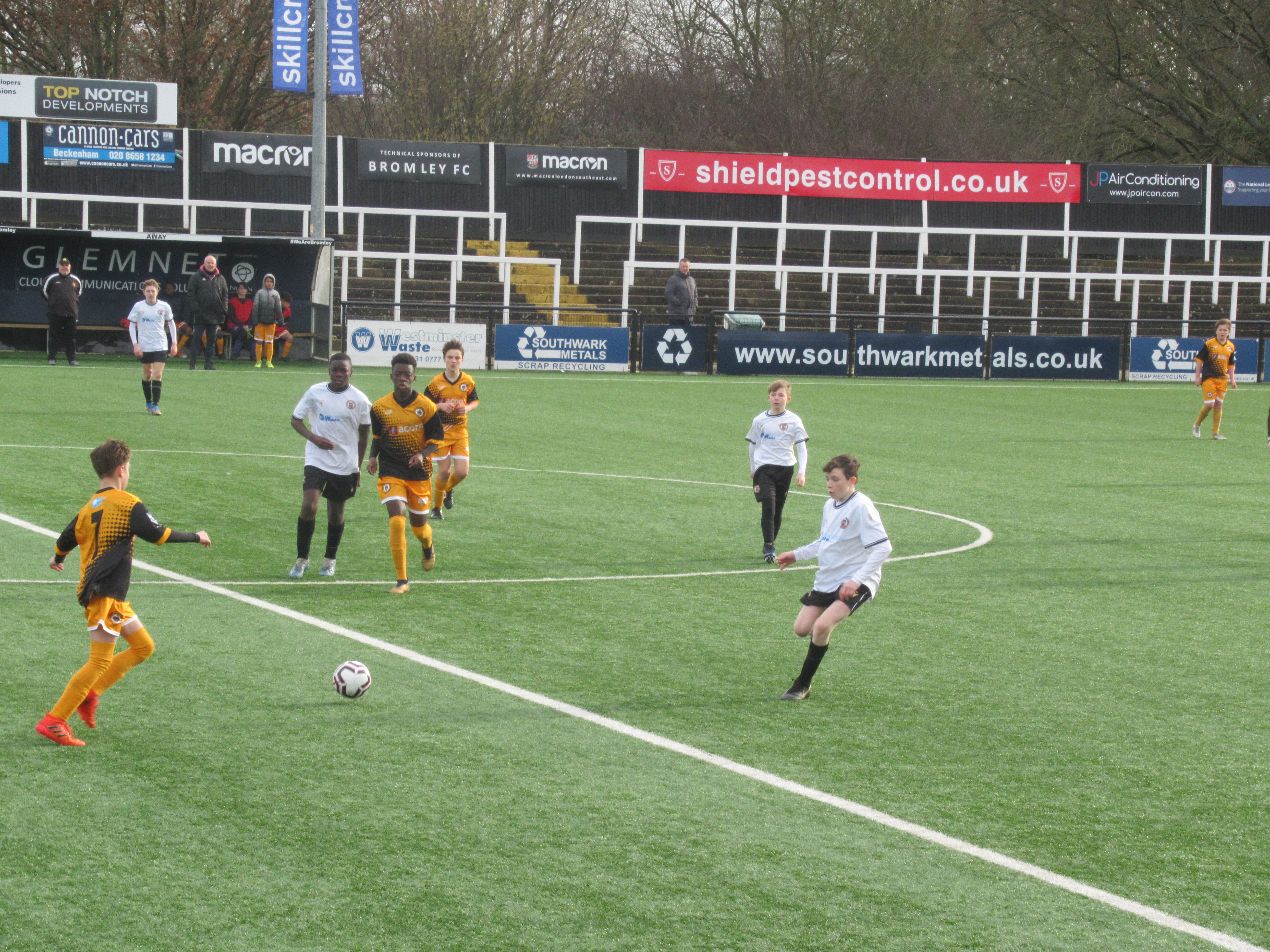 Then in six minutes into the second half, Bromley went ahead when the no 8 played a fine ball through to the no 18 who swept home his second goal of the game with another accomplished finish.

It wouldn’t be Cray if they didn’t make a fight of it and three minutes later were back level again when another fine ball from midfield saw Ihiedi latch onto the ball and into the box, round the keeper and slotted his second of the match. 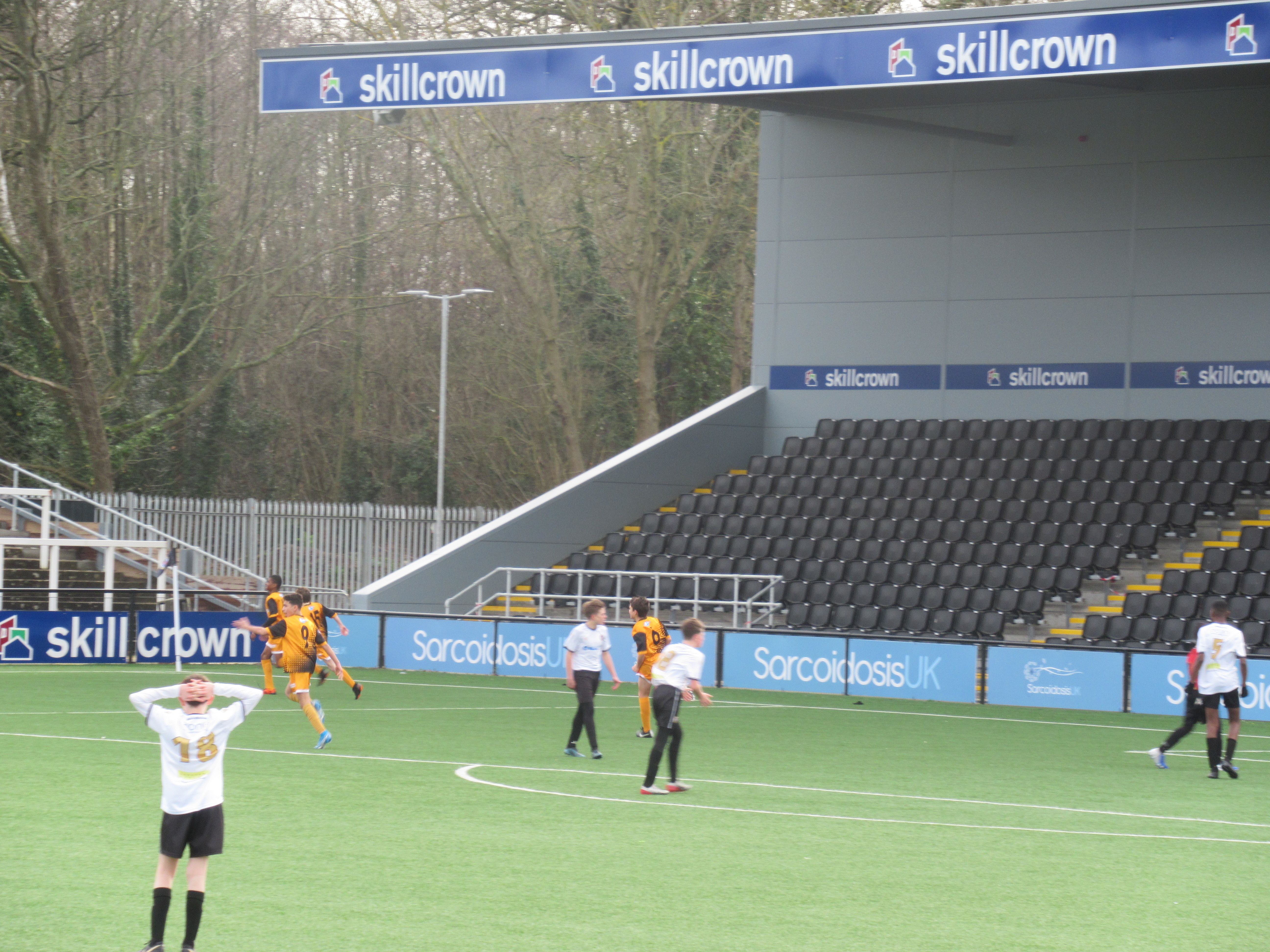 From here the game became an intriguing battle of wills and from a free kick 20 yards from goal, Perkins curled the ball round the wall but was claimed by the keeper.

Bromley had a good spell before the end and twice came close to winning the game.  Firstly, a fine passing move saw the no 9 played in down the right of the area and his ball across was well pushed out by Haines and out to the no 18 who saw his hat-trick attempt thwarted by another Redman clearance off the line. 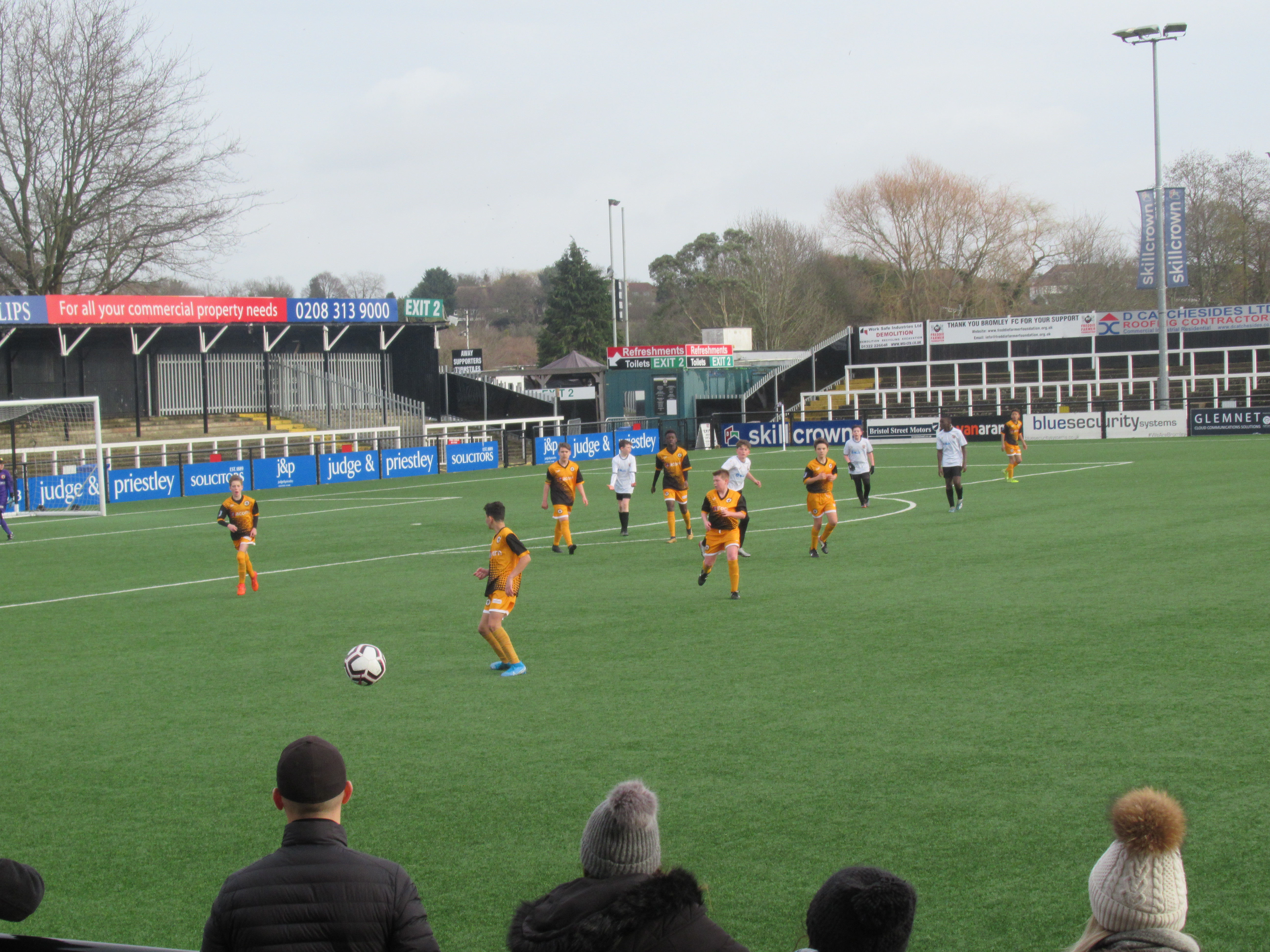 Then for the home side, the no 7 shot wide from 25 yards and then the no 18 down the right worked his way into the area and swept his cross-shot fractionally past the right post.

Cray looked for a winner but it was looking like extra-time was going to have too separate two evenly matched teams.

The first period was exciting and saw Cray twice threaten to go in front firstly when Hards hit a low shot which was gathered by the keeper.  Then Kaya Mahmut set up Fowler who shot over the top.

However, Bromley had the best chance of extra time when the no 9 combined to set up the no 7 who looked to have won the game when he went round Haines but his shot was cleared off the line by Joseph McCallum.   Then at the other end, Mahmut set up Perkins who shot over. 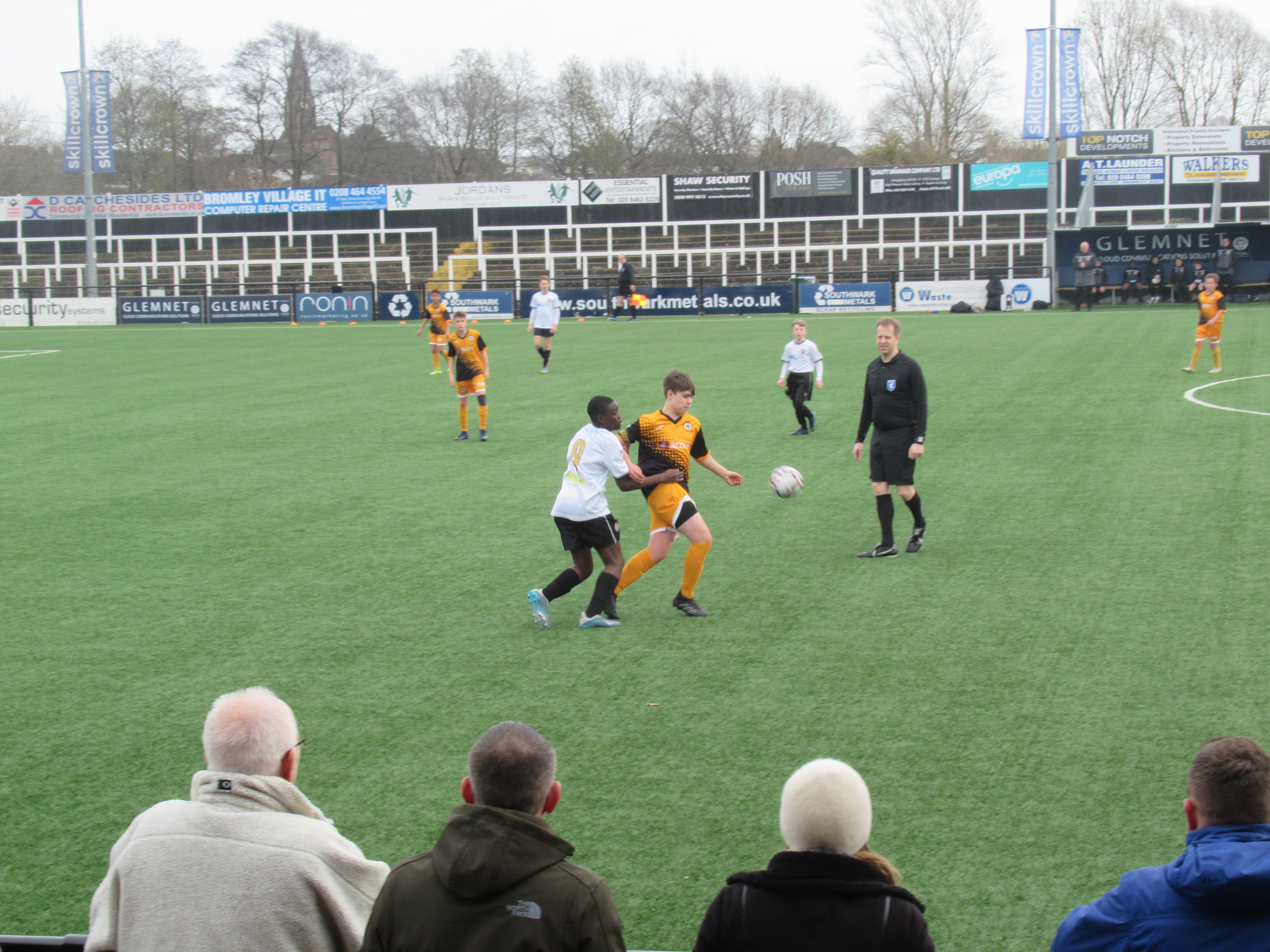 The second period saw both teams beginning to tire a little with Bromley winning a couple of corners while for Cray, Hards made a tremendous run from just outside his own area to almost the edge of the Bromley box but was well held up the Bromley defence and the chance went away.

In the end penalties was looking inevitable and after such an epic game perhaps a shame there had to be a loser but penalties it was.

Both teams showed great composure with their spot kicks with the first four Bromley kicks converted while by the no 8, 11, 2 & 7 while for Cray, Elliott Hayward, Fowler, Ihiedi and Mahmut all finding the net expertly.  The decisive fifth penalty for Bromley taken by the no 18 was saved at the left post by Haines who pushed the ball out leaving Cray with one kick to win.  Up stepped Zuriel Elueme who with composure slotted the ball home and Cray had advanced to a Kent County Cup Final in their first season as a Kent Youth League team. 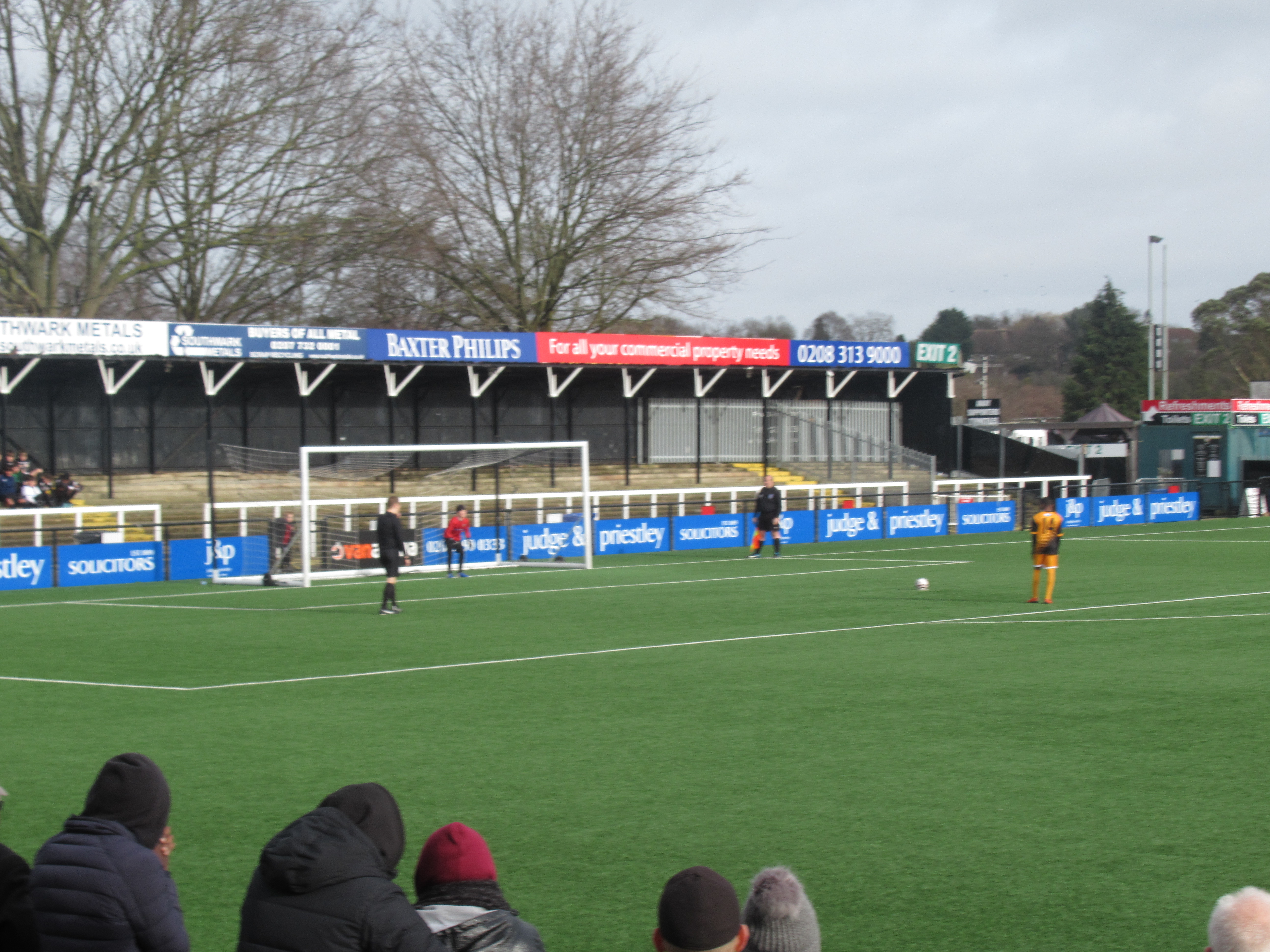 In an ideal world there would have been a replay and a chance to meet again but there had to be a winner on the morning and it is Cray who face Maidstone United in  what should be a fascinating final.  The two sides have to meet in the league too so I would recommend those matches to anyone if they are similar to this match. 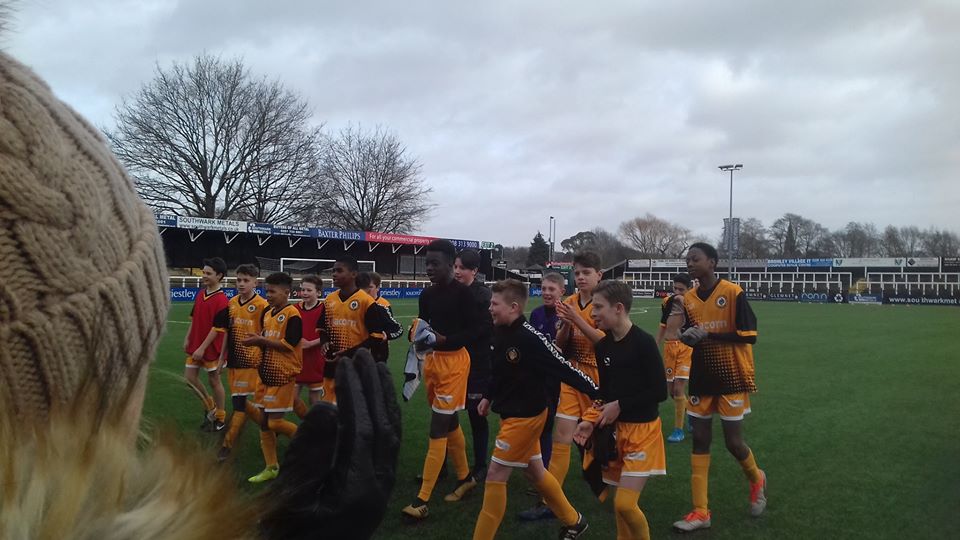 Superbly refereed and with great sportsmanship from both sides this was a great occasion and two clubs who put youth team football at the heart of their future and for the community deserve great credit.