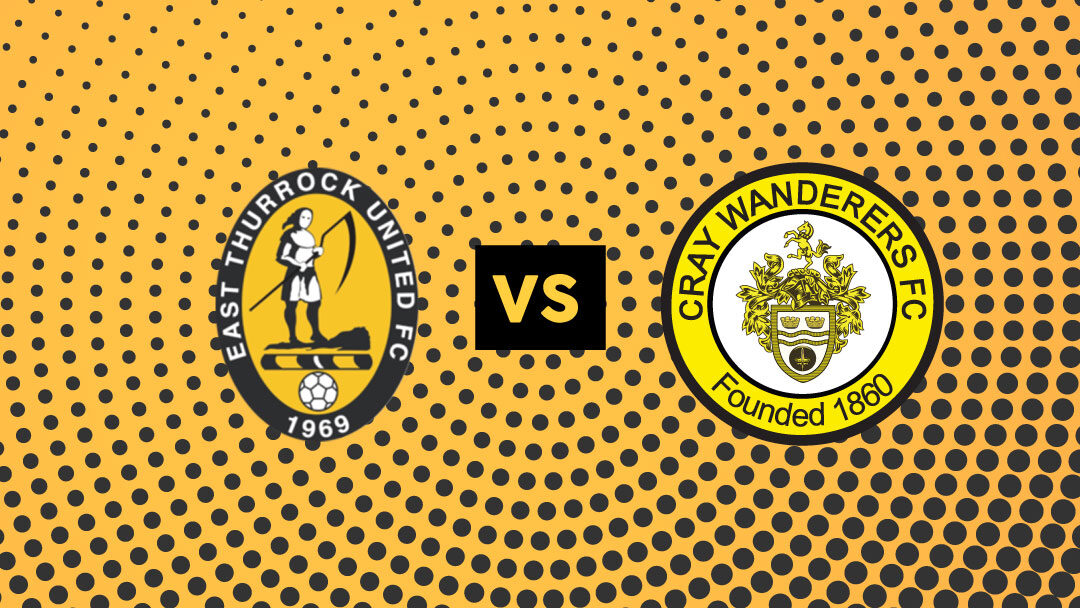 Cray Wanderers hit the road for the first time in the Isthmian Premier this season on Saturday with a trip to East Thurrock United.  Kick off at the Rookery is 3pm.  Coincidentally, East Thurrock was Cray’s last away trip before the suspension of the 2019-20 season.

Tony Russell’s side come into the game with a solid start to the season with two home wins and for what it is worth this early in the season stood at the top of the table after the impressive 5-1 win at home to Kingstonian last Saturday.  Cray followed that up with a 3-1 win at home to Fisher in the FA Cup on Wednesday night.

Jason Banton has settled in well out on the left for Cray and scored on his debut on Saturday and followed up with a high quality brace against Fisher and looks like a firm fans favourite already. Another player who has carried on where he left off in pre-season is Freddie Parker. Two goals in two matches including a real poacher’s effort to put Cray back in front on Wednesday shows a player in good form and confidence. Joe Taylor got off the mark for the season last Saturday with two left footed goals and Rhys Murrell-Williamson also scored giving the front three and Freddie from midfield punch up front.

Another positive from the FA Cup tie was the appearances of Charlie Allen and Ben Mundele off the bench and both gained valuable minutes, especially Allen who played 70+ minutes in midfield.

Although, Cray only faced in East Thurrock in February a lot has happened in that time for the Rocks and this is a completely new team to the one Cray faced then.  Long-time Manager John Coventry departed the club and has been replaced by ex-Romford boss Paul Martin. Also there has been a change of hierarchy at the top with new Chairman Alfie Best taking over the club in the summer and there have been a number of new signings giving the club a fresh new look.

The Rocks started the Isthmian Premier season with a 0-1 defeat at Cheshunt last Saturday with the winner coming in the first half.  Then on Tuesday night, East Thurrock lost 0-1 at Potters Bar Town in the 1st Qualifying Round in a tight tie decided midway through the second half.

The last trip to East Thurrock on 22nd February, three weeks before the season ended saw Cray win 1-0 with a second half free kick strike from Rhys Murrell-Williamson.  The game at Hayes Lane almost a year ago now on 28th September ended in a 1-1 draw.

East Thurrock United were only formed in 1969 and the Corringham based side became members of the Greater London League reserves in 1970. After winning the division the league merged with the Metropolitan League and after remaining a reserve side initially in the new Metropolitan London League in Division Two and were promoted to Division One where they played Johnny Biddle’s Cray Wanderers side for two seasons.  After the league merged with the Spartan League they were in Division Two and so missed matches against Jimmy Wakeling’s Cray Wanderers team.

They moved to the Essex Senior League in 1979 and in 1988-89 earned promotion to Division Three of the Isthmian League and won promotion in 1999-00.  A couple of years later they were moved to Division One North and in 2004-05 were moved to the Southern League East and finished second in their first season and were promoted to the Isthmian Premier. They were relegated in 2007-08 to the North and finished second losing in the playoffs to Concord Rangers and also the following season after finishing fifth.  In 2010-11 they were champions of the Isthmian North and met Cray for three seasons in the Premier.  In 2011-12 they reached the 1st Round of the FA Cup losing to Macclesfield Town and the following season reached the playoffs losing to Lowestoft Town.  In 2014-15 they reached the 1st Round of the FA Cup again losing to Hartlepool United and in 2015-16 finished 3rd to reach the playoffs where they beat Tonbridge Angels and Dulwich Hamlet to gain promotion to the Conference South.  They stayed there for 3 seasons before being in 2018-19 returning to the Isthmian Premier where they were 11th when the season came to an early end.

It is way too early to put too much on the game at this stage of the season but with the trip to East Thurrock which is always a great challenge to any side and the game at Folkestone Invicta on Tuesday night this promises to be an exciting week.

Cash payments only to enter the ground and no online sales for this match. There will be track and trace taking place and East Thurrock have recommended the NHS Covid-19 app if you have a I-Phone or write your details in the book when you enter the ground.

NB : ID with proof of age, or a student pass may be requested for concessionary admission.

BY ROAD
Directions from M25 Junction 30.
Take a13 towards Tilbury.
Exit A13 at Stanford-le-Hope exit (A1014), (this is just after the BP garage).
Take third exit at roundabout over A13 to join A1014.
Follow A1014 for approx half a mile.
Stay in left lane as you approach next roundabout (London Gateway Port roundabout), to stay on A1014
After another mile, go straight through traffic lights.
Take next left into Rookery Hill, ground entrance is on your left.

Please note there is limited parking available at the ground so please arrive early if you need to park in the ground. Off site parking along Rookery Hill, outside ground.

Can we also ask for you to be considerate to the local neighbourhood when parking and ensure that you do not block any access points.

By Bus
The ‘100’ bus (www.firstgroup.com) which runs between Chelmsford and Lakeside stops 200 yards from the ground (Corringham Club Corner). Keep car park opposite Corringham Club on your right, and follow Church Road (which becomes Rookery Hill), ground comes up on your right. The 100 bus also runs past Stanford-le-Hope and Basildon rail stations if you are coming via rail.

BY RAIL
Nearest stations are Stanford-le-hope or Basildon, both on the Fenchurch Street to Southend line. Stanford is about a mile away as the crow flies. Basildon 4 miles. A small cab fare, or jump on the’100′ bus (see above).

Nearest pub: Your best bet is the Bull on Church Road on the approach to the ground close to St. Mary’s Church where you could pop in for one before going into the ground and the very fine clubhouse. If February’s windfest trip to East Thurrock is anything to go by perhaps a warm jacket or fleece might be in order.