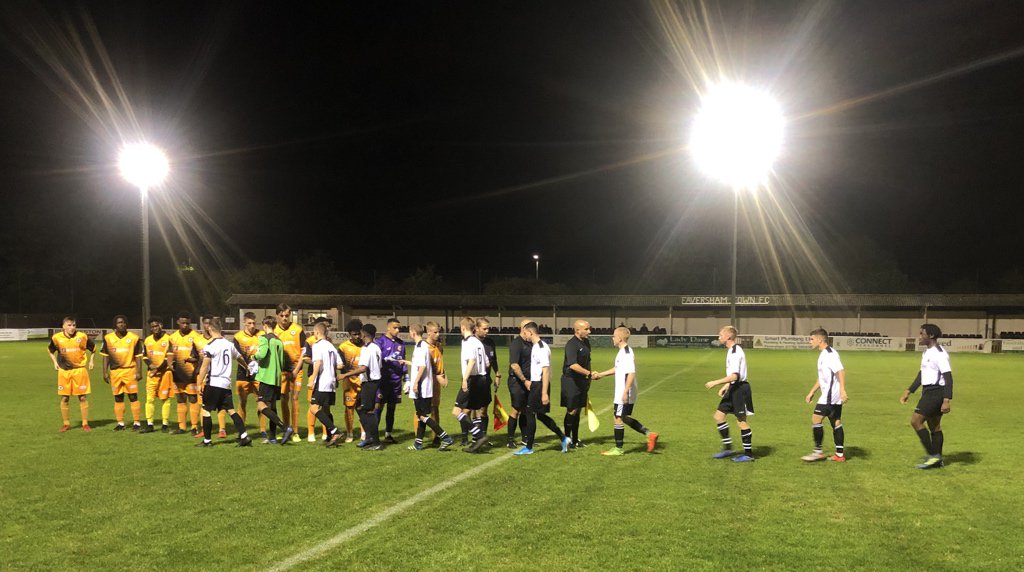 Cray Wanderers are through to the 3rd Qualifying Round of the FA Youth Cup for the second straight season after a battling victory at a wet and soggy Faversham Town.

In a cup tie high on competitive quality despite the at times appalling conditions Cray Wanderers had to show their mettle to make it through and perhaps on the balance of play deserved to edge the game.

Cray started quickly and went ahead from the penalty spot in the 22nd minute when Palace Francis netted after he was impeded inside the area by goalkeeper Harrison Firth.  Faversham though had a lot of pace in attack and scored a good goal in the 33rd minute when Jack Hardy finished well to make it 1-1 at half time.  In a second half played for the most part in very heavy rain, Cray looked the more positive although Hardy hit the crossbar for the home side.  It was Cray though who won the game in the 66th minute when the impressive Femi Abatan down the right did well to put the ball into the area and in the six yard box James Przelawski was on hand to turn the ball home.

Lee Amis’ Cray side had advanced through two home ties against VCD Athletic and Ashford United scoring eight goals in the process playing fast flowing football while Faversham, managed by ex Cray Wanderers player Carl Rook won 8-0 at Holmesdale in the 1st Qualifying Round so goals were expected.

Despite the wet conditions throughout the last couple of days, the pitch was perfect for a good cup tie, slick and good for strikers and not so much for defenders.

Cray got off to a very positive start to the game but it was the home side who had the first goal attempt when Ed Muddiman fired just over the top.

For Cray their first shooting chance cane when the impressive Emanuel Oduguwa set up Chris Al Hassan down the right of the penalty area who shot over the crossbar.  Then, Al Hassan became provider finding Max Gayle who shot just wide of the right post from 25 yards.

Cray continued to move the ball around with pace and Al Hassan found James Przelawski who saw his shot blocked and came out to Palace Francis whose shot from 12 yards was well held by Harrison Firth.   This was followed by Oduguwa flashing a shot narrowly over the crossbar.

A goal was looking like it was coming and it was Cray who went ahead when a ball forward found Francis who broke into the area and was perhaps harshly was adjudged to have been impeded by Firth and a penalty kick was given.  From the spot kick Francis converted although Firth almost got his hands to the ball.

Shortly after, Przelawski shot over the bar and it looked like Cray were beginning to dominate but credit to Faversham they came back into the game and also displayed a lot of pace up front.  They came close to scoring when a ball down the right found Ed Muddiman who ran into the area and his near post shot was well held by Adam Bennett.  Just on the half hour, Abatan hit a shot from 20 yards which just went past the left post.

In the 33rd minute, Faversham levelled with a well worked goal when Muddiman down the right played a fine ball across to the left to Jack Hardy who burst into the area, held off the challenge of Archie Daniels and finished well shooting into the bottom right from 10 yards.

Cray looked to regain the lead straight away and Leslie Ariku inside the area found space but was denied a goal by a good block from Lucas Nicholson.  Then from a throw in the ball was volleyed towards goal by Francis but was deflected over for a corner.  From the corner, Theo Foley rose to get a header in which was cleared out to Oduguwa who shot well wide.

Before half time both sides could have taken the lead.  Firstly for Cray, a shot from Abatan was well held by Firth who then saved a well hit shot from Francis.  Just before the break, Faversham almost went in front when Muddiman was unlucky to see his curling shot go fractionally wide of the left post.

The second half was perhaps less full of chances but the heavens opened at the beginning of the half but certainly didn’t dampen the competitive nature of the cup tie.  Cray had to make a change at the break with Akola Salami coming on for Palace Francis who appeared to have got a knock before half time.

Salami proved an inspired substitution as he made an immediate impact breaking down the right with speed and was unlucky when after cutting inside, his ball to the far post just couldn’t reach Ariku after taking a nick off a Faversham defender.  Cray won a couple of corners and applied good pressure and Al Hassan’s cross found Foley but his header inside the area was cleared.

Cray though had a let off though when James Geddes found Muddiman who fired in a shot which was well pushed out by Bennett but Hardy following up seemed certain to score but fired his effort against the crossbar.

A couple more substitutions for Cray with Muqisa Hogasi and Tion Cudjoe coming on and both played their part in turning a tight game Cray’s way.

In the 66th minute, Cray got their noses in front when Hogasi found Abatan down the right who with electric pace broke into the area and laid his ball across into the six yard box where Przelawski showed predatory qualities to turn the ball into the net.

With the rain still lashing down, Faversham looked to get back into it once again but Cray were defending well and the nearest they came was when Joe Muddiman shot over the bar.

Cray were unfortunate not to score a third when from a free kick out on the right Abatan’s ball across was met by a thumping header from Cudjoe from the edge of the area and hit the back of the net but was disallowed for offside which looked perhaps a debatable decision.

Cray continued to look the more likely scorers at this stage and another fine ball in from Abatan set up Ariku who latched on to the pass and as the keeper came out just rolled the ball agonisingly wide of the left post.  Before the end Cudjoe saw a free kick come back off the wall and was deflected behind for a corner.

In the final minutes, Faversham won a couple of corners which led to Firth coming up from goal looking to grab the equaliser but ultimately came to nothing and Cray could clear their lines and make it through a tough contest.

Cray had to show a different side to their nature tonight and they worked incredibly hard and created a number of chances against a decent side who gave their all and contributed much to a very good match.  This was Cray’s night though and now they look forward to the 3rd Qualifying Round draw, the last before the 1st Round proper.