Cray Wanderers advanced to the 2nd Qualifying Round of the FA Youth Cup after a dramatic penalty shoot out decided a surprisingly goalless tie against a strong Dulwich Hamlet side at Glebe FC.

Cray showed great nerve to score all five penalties with Reggie Rye slotting the winner and Dulwich scored four penalties with the second kick from Reubuan Zamorano coming back off the crossbar.   Cray will now return to Foxbury Avenue to face Glebe in the 2nd Qualifying Round later in the month.

Dulwich shaded the second half particularly the last ten minutes and came closest to getting a winner when Benjamin Wetshi in the last minute slipped the ball just wide of the right post.

Before the game there was a minute silence in respect of HM Queen Elizabeth II. 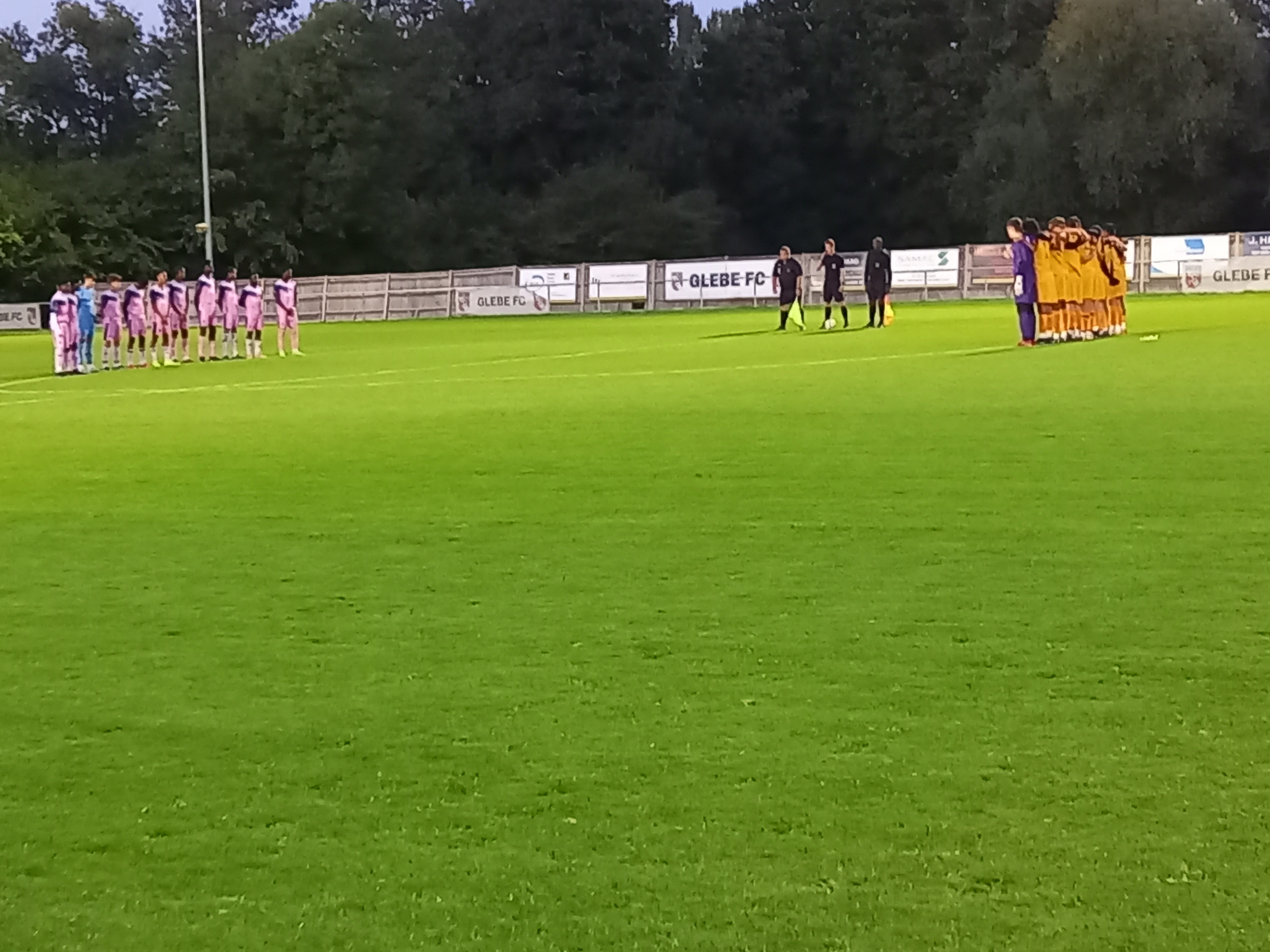 On a rather chilly night in Chislehurst, the game set off to a cracking pace and the speed of attacks from both sides was incredible to see.   The Wands had the first chance of the game in the 2nd minute when from a corner, Lucas Vazquez headed just over.

Four minutes later Dulwich showed their qualities in attack with Benjamin Wetshi firing in a shot which went fractionally over the top.

Cray then had a very good spell for 20 minutes and Reggie Rye shot over the bar and in the 11th minute came closest yet when Alfie Murphy jinked into the area and was unlucky to see his shot come back off the right post and a follow up was deflected behind for a corner.  From the corner the keeper Kacper Orlowski did well to divert a Ronnie Wickes header over for a corner.

In the 15th minute, Michael Ihiedi was played through down the right and was unlucky to see his shot lifted over the keeper drop just wide of the left post.  At the other end Wetshi who scored a hat trick in the previous round showed his pace and his effort was blocked and as he looked to slot home the rebound was denied by a fine tackle from Luke Frost for a corner.

Cray came close from another corner with Ihiedi glancing wide at the right post while for Dulwich Wetshi shot wide.

Murphy was a constant threat in the first half hour for Cray and once again jinked forward, cut inside and tested Orlowski with a low shot and then Endri Curraj shot well off target.  Dulwich came close when Shyheim Foster shot wide.

Before half time both sides were denied by good saves from the keepers.  Firstly, in the 41st minute, Murphy down the left of the area saw his shot well blocked by Orlowski and Curraj fired the rebound wide.

Then two minutes before the break Dulwich seemed certain to score when Kofi Broni down the left found space but Thomas King flung himself to make a great block.  Then Murphy saw another shot smothered by Orlowski and Brajan Kacpzak for Dulwich saw a shot held by King.

The second half could never quite match the pace of the first half and there were fewer chances overall but still an enthralling tie. 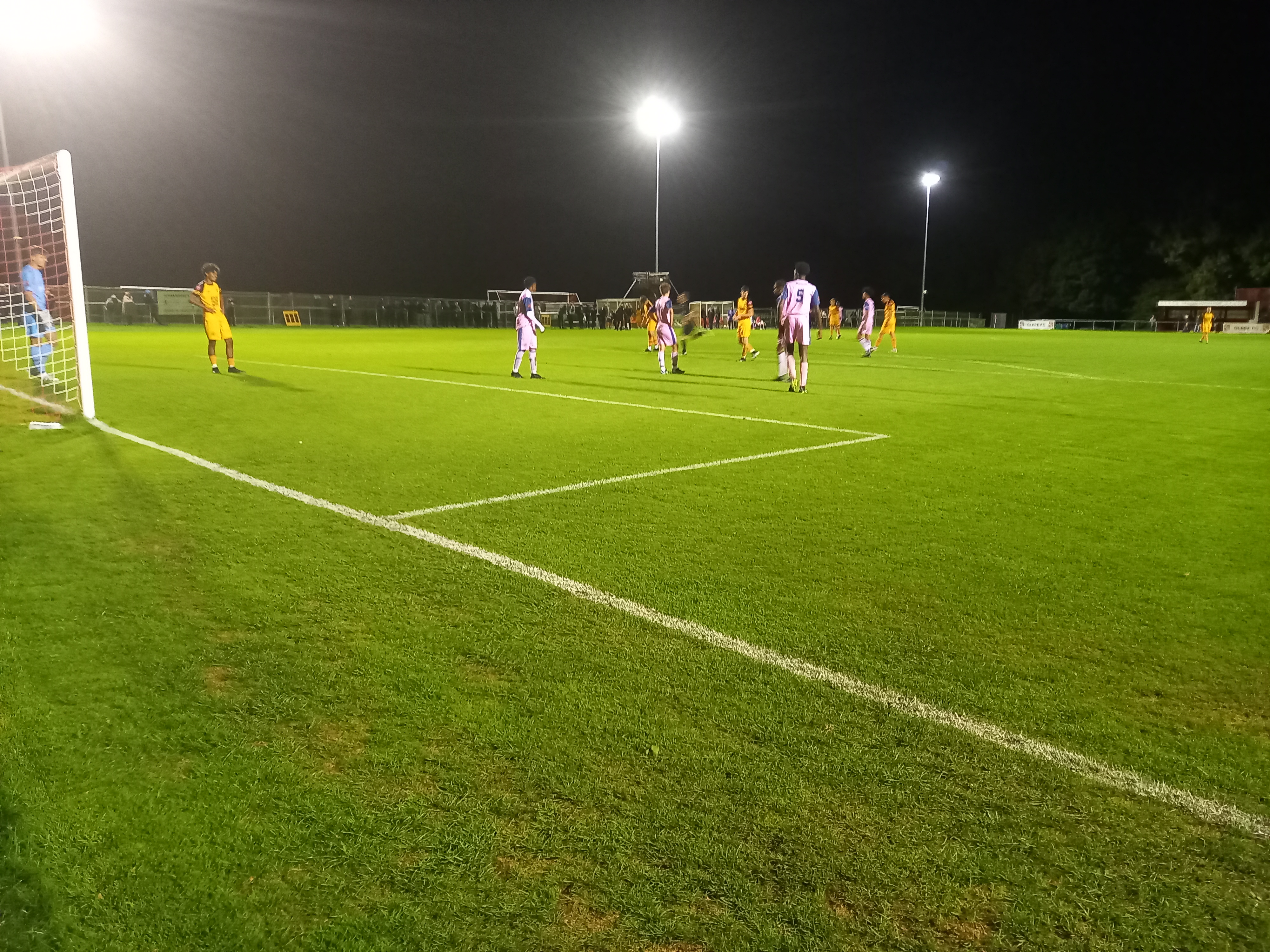 A minute after the break Wetshi drove a shot into the side netting for Dulwich while for Cray, Reggie Rye fired a free kick just outside the area over the bar.

Then Sam Williams down the left took the ball round Orlowski but his attempted shot was blocked and his cross to the far post just missed Ihiedi looking to follow up.

In the 62nd minute a fine run down the left for Hamlet by Amal Mujuzi saw him cut into the box and laid the ball across to the far post where Reubuan Zamorano fired over the bar.

Cray substitute Rocco Batman down the right cut into the area and his shot was held by Orlowski.  Then from a free kick out on the right, Rye’s ball towards the far post was headed wide by Curraj.

Going into the last fifteen minutes Dulwich looked the more threatening side and from a free kick the excellent Kacpzak’s free kick was nodded wide by Foster.

Then and Kacpzak’s cross from the left to the far post was flicked wide by Cain and then another cross went across goal with no-one to apply a touch.

In the final minute of the 90, Dulwich created the best chance of the half which fell to Wetshi down the left who just inside the area rolled the ball wide of the right post.

In injury time a cross from Foster found Zamorano whose shot was blocked but in the end time ran out and with no extra time the match was decided on penalties.

Dulwich took the first penalty which was scored by Trevay Anderson and for Cray, Curraj scored to make it 1-1.  Hamlet’s second penalty from Zamorano hit the crossbar and the Wands went ahead through Batman’s well placed kick.  Chadd Yassin-Sheriff, Wetshi and Cain all scored for Dulwich but Cray showed great composure with their final three kicks and Renaldae Brown and Alfie Murphy scored and at 4-4, Rye slotted home the last kick to send Cray through.

Both teams deserve great credit for a terrific contest full of endeavour with the only surprise that there wasn’t a goal in 90 minutes.  With Neil Smith in the dugout, there was real determination from the Wands and despite not having much time together as a team showed good energy against a Dulwich side that had already played one round of the competition.

A big thank you to Rocky McMIllan and all at Glebe FC for hosting the game so efficiently and the Wands now return there for the next round in what should be another great game.