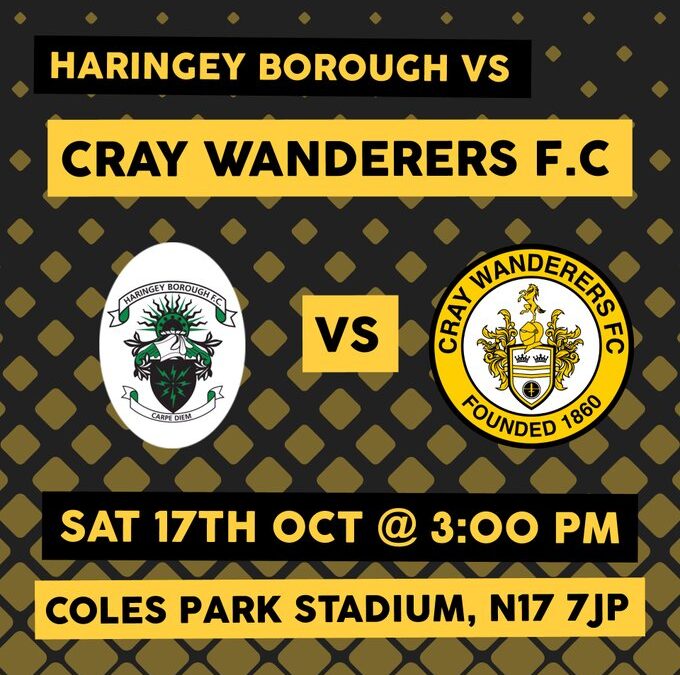 Cray Wanderers capped off a draining week with a return to winning ways in the Isthmian Premier with a tremendous come from behind victory at Haringey Borough. The Wands who like Haringey made it through to the 4QR of the FA Cup in midweek move up to 5th in the table on 12 points and three points off leaders Worthing.  This was Cray’s first ever win at Haringey and also the first goals scored there.

Haringey got off to a very fast start and went ahead on 12 minutes when Alfred Bawling sidefooted into the net from Georgios Aresti’s cross but Cray battled back well and levelled in the 28th minute when Freddie Parker’s free kick was pushed out by keeper Jonathan Miles but following up, Bradley Pritchard struck his first goal of the season.

A fast paced, action packed game continued into the second half but Cray hit a purple patch of form late in the half and Ben Mundele made a run down the right and  lashed in a shot which beat Miles at his near post.  Then, in the 76th minute, Rhys Murrell-Williamson who like Mundele was very much part of the drama at Bristol on Tuesday crashed a right foot cracker into the roof of the net for his third goal of the season to make it 3-1.

Cray headed to Coles Park after losing to Bishop’s Stortford on Sunday and then the draining, gruelling night at Bristol on Tuesday which went the distance and named an unchanged starting eleven.  There was little sign of lethargy here from either side as the first half in particular seemed to fly by in a flash and two teams full of pace set about their business straight away.

For Cray, Rhys Murrell-Williamson thankfully over the situation that led to him going off at half time on Tuesday was immediately into the action and fired over down the right.

Haringey were looking bright and breezy going forward and Roman Michael-Percil down the left cut inside and fired in a shot which was well held by Lewis Carey.

Cray won a free kick down the left and Freddie Parker’s ball into the box looked to be claimed by Miles but was adjudged to have been fouled by Jay Leader as the ball went into the net and no goal was given.

However, in the 12th minute it was Borough who went ahead when Mitchell Nelson’s ball forward from the back was intercepted by Georgios Aresti who broke down the right and laid the ball across to the lively Alfie Bawling who sidefooted the ball past Carey and into the bottom right.

Shortly after it was nearly two when Scott Durajaiye whipped over a fine ball from the left to Bawling whose snap shot was held by Carey.

At the other end though Cray were getting some joy and good approach play led to Parker finding Joe Taylor whose shot was blocked well by Miles and did well to block again from Parker and finally Tom Phipp’s effort was blocked and behind for a corner.

The game was going from end to end and Bawling found Michael-Percil and his cross-shot was blocked by Nelson and came out to Bawling who shot wide.  Then in midfield Laste Dombaxe picked up a loose ball, went forward and hit a shot from 25 yards over the top.

Cray though were looking threatening and Parker cut in from the left and hit a shot which Miles got down to save from twenty yards.  Then Parker shot wide following a free kick on the right edge of the area.

However, Cray didn’t have to wait long for another free kick opportunity and after Murrell-Williamson was fouled, 25 yards out in a central position, Parker bent the ball round the wall and was pushed out by Miles but as far as Bradley Pritchard who from 9 yards buried the ball into the net to make it 1-1.

Haringey almost went back in front straight away but Carey did well to make a block save to deny Dombaxe and then a good move saw a cross from Aresti find Michael-Pericl in the box but couldn’t quite connect with his overhead kick and was held by Carey.

Chances continued to come during a whirlwind half and from another free kick played in the box the ball was cleared out to Murrell-Williamson who volleyed over.

Then there was a tight offside call down the right when Jerome Federico slipped a pass through to Joe Taylor who finished with typical style but the flag was raised for offside but at the end of the half the scores were tied at 1-1.

If the first half was quick the second was hardly flagging either and early on Parker hit a shot from 25 yards fielded by Miles.

Haringey though still posed a threat particularly through Michael-Percil who picked up a loose ball down the left and hit a shot which went wide of the right post.  Then Aresti set up Bawling who was denied by a good one handed save by Carey.

Cray had a decent spell and from a Parker free kick which hit the wall the ball came to Phipp who fired over and then Cray won a couple of corners with Jay Leader up from the back proving a handful winning headers in the area and were cleared away.

A key moment came in the 65th minute when down the left Michael-Percil sent over a cross to the far post where Bawling seemed destined to score but his shot was met by a terrific block save by Carey by the post.

In the 69th minute, Cray went in front after a period of pressure and passing down the right, Parker’s shot was blocked by Dombaxe and out of the area to Ben Mundele who charged forward and from 20 yards hit a sweet strike which beat the dive of Miles and into the bottom right corner for his second goal of the week and great reward after his rather unfortunate red card at Bristol.

Cray were looking in control at this point and scored a third goal in the 76th minute and after good link up play, Parker found Murrell-Williamson who cut inside, past the full back into the area and with his right foot blasted a shot high into the top left corner and an unstoppable strike.

Haringey looked to respond and Carey did well to fling himself to block Jorge Djassi-Sambu’s header.  Then Aresti’s shot was blocked and Djassi-Sambu following up was flagged offside.  The final chance for the home side came from a cross from David Olufemi and Claudiu Vilcu’s header went over the bar.

There was some concern for Cray when Mundele fell awkwardly during a challenge and had to go off replaced by Barney Williams.

Cray though almost rounded off a perfect away day in the final moments when a stray back pass was intercepted by Taylor who advanced down the left on goal past Miles but his shot came thudding back off the left post.

In the end though, Cray had done enough to secure a fine win against a side that will win more home matches than lose and showed great character once again after a tough week to come from behind to win with something to spare in the end.  There were some fine performances, Lewis Carey made some very good saves during the match, Tom Phipp was imperious in midfield, while Federico and Murrell-Williamson were threats down the wings and Tom Carlse was excellent once again at the back.

Before Cray head to Canvey Island in the FA Cup, the Wands play Bognor Regis Town in the league on Wednesday as the big games keep on coming but if as good as this game will be really something to savour.