Cray Wanderers look to build on last Saturday’s win at Carshalton Athletic with another away trip as Danny Kedwell’s team head to Haringey Borough. Kick off at the CVS Hire Stadium is 3pm.

Cray ended a seven game losing run in league and cup last Saturday with a gutsy and determined display at Carshalton on a wet afternoon and soaked up early pressure to score three goals through defender Marvin McCoy on his debut and in the second half from Dean Beckwith and Andy Drury to secure the win. 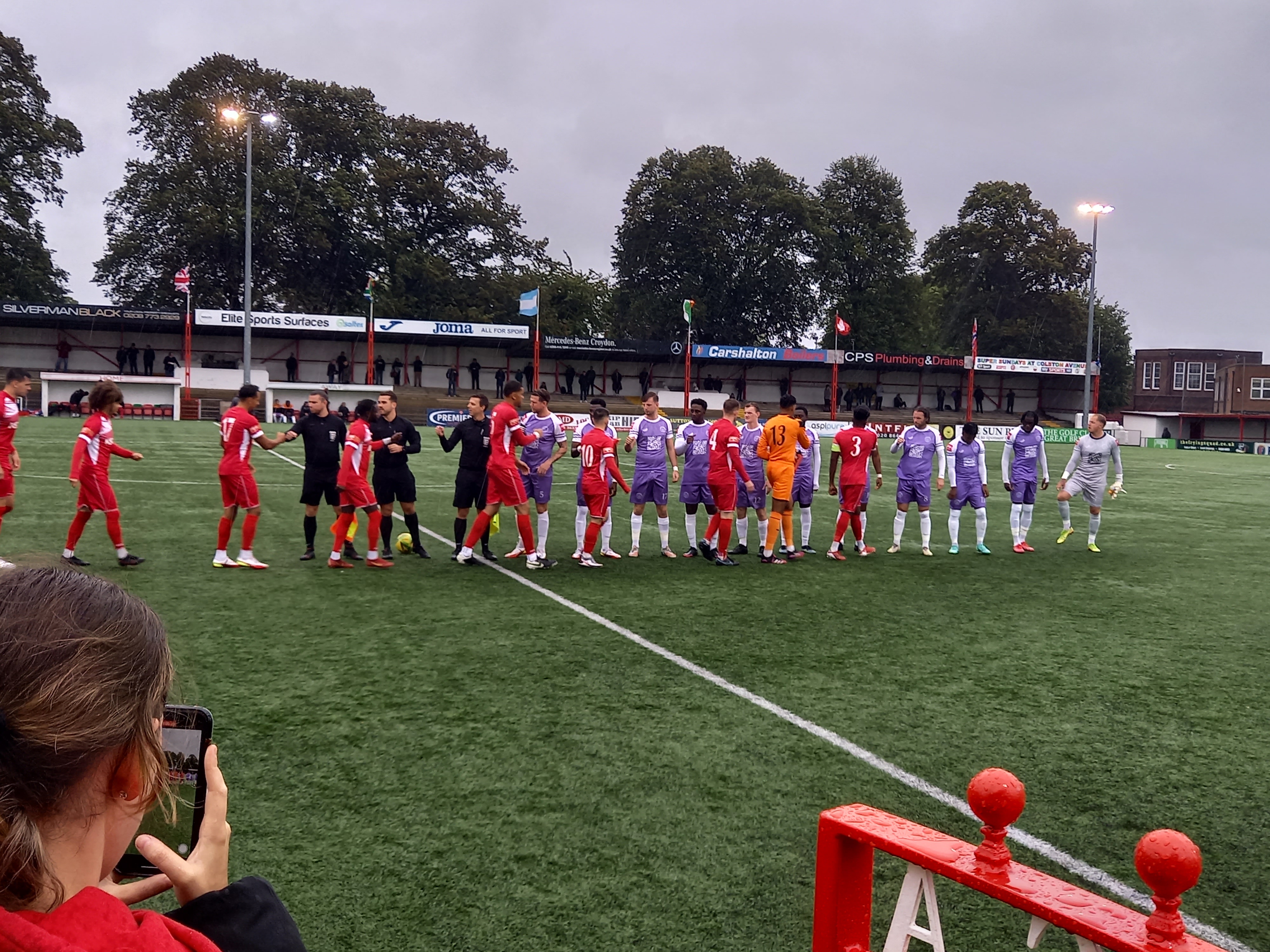 There were some impressive displays with Jack Turner in goal outstanding and making another penalty save during the game while Tom Hanfrey, Anthony Cook, Kasim Aidoo and Cameron Brodie put in excellent performances amongst a very good, resolute team display. 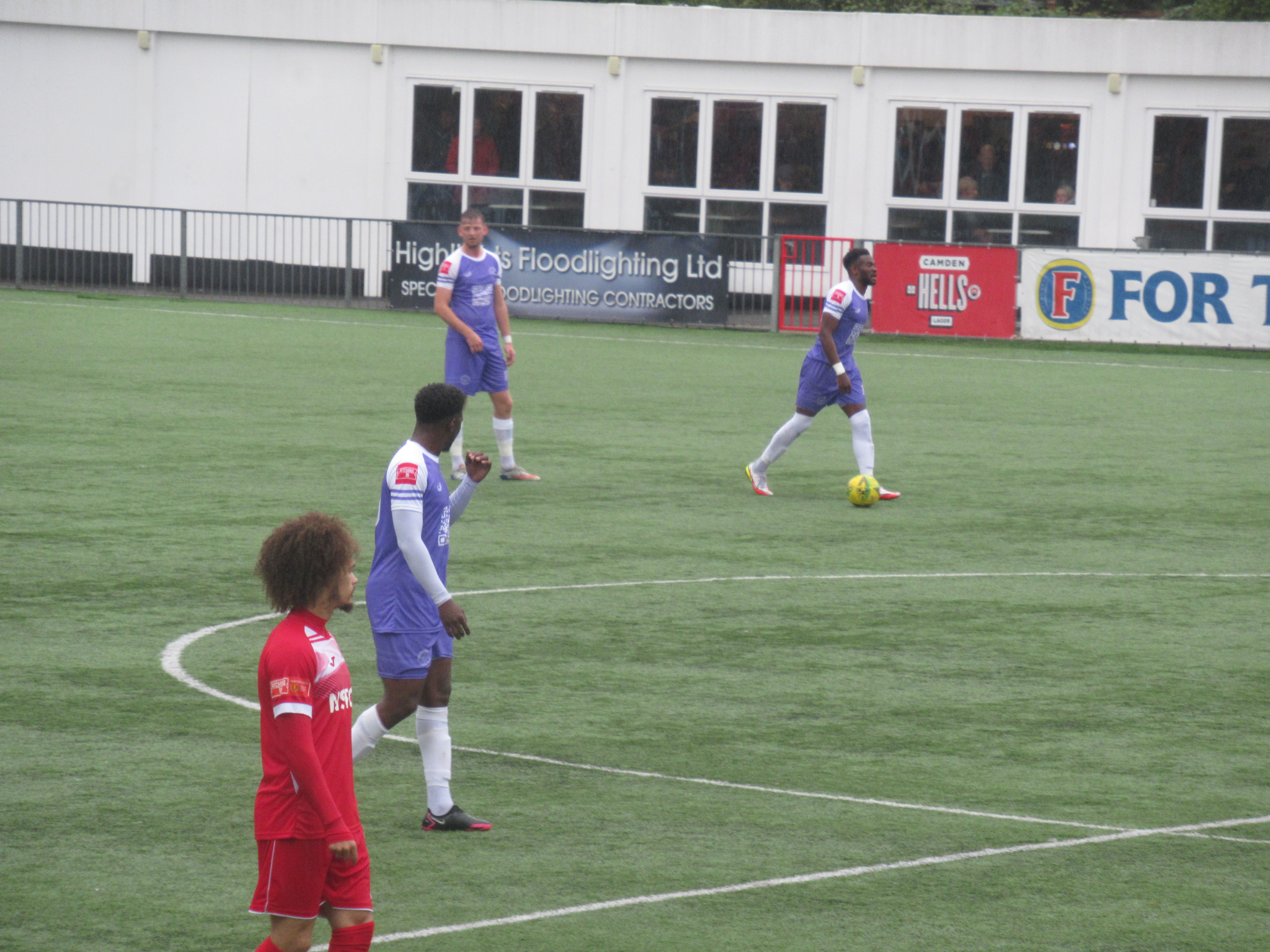 With October now looking less busy through re-arranged fixtures with Horsham and Folkestone moved to November due to FA Cup commitments it gives chance after Saturday for any injuries to heal or give time for any new players to settle in including midfielder Zakary Guerfi who has joined the club from Tonbridge Angels. 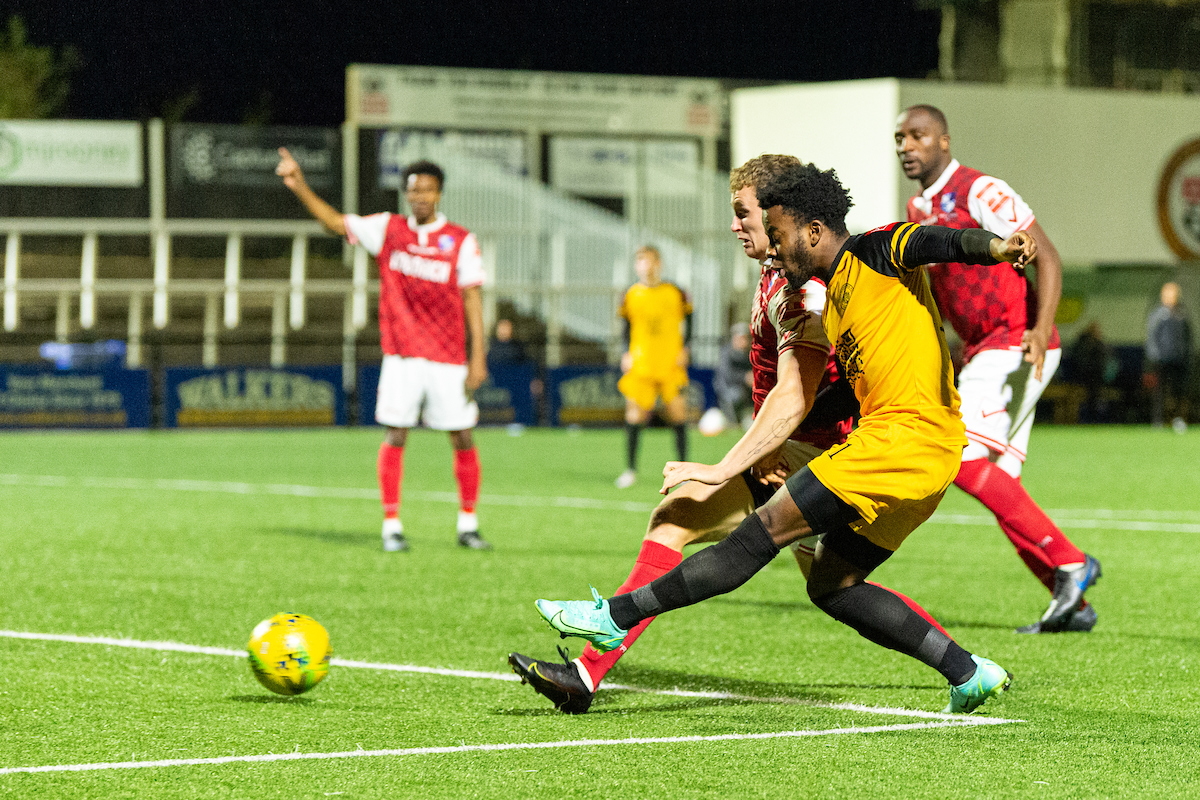 To achieve back to back wins will have to be done the hard way as Haringey Borough are a tough team to beat at home and Tom Loizou’s team currently lie 7th in the league table after last weekend’s goalless draw at Leatherhead. Home form has seen Borough beat Horsham (3-1), Wingate & Finchley (4-1) and East Thurrock United (5-1). They drew 2-2 with Potters Bar Town in their last home match and the only defeat was 0-1 to Corinthian Casuals in September.  Away from home Haringey won at Bognor Regis Town (2-1) and drew at Leatherhead but lost at Kingstonian (0-1) and Enfield Town (0-1). In the FA Cup, Haringey were beaten in the 1st Qualifying Round at Peterborough Sports (1-2). Leading scorer is David Olufemi with four goals.

League matches between Cray Wanderers and Haringey Borough down the years have been few and far between with just four meetings previously in the league with Cray winning two and two draws.   The last meeting was almost a year on 17th October 2020 and one of only seven league matches played in the 2020-21 season with Cray coming from behind to win 3-1 with goals from Bradley Pritchard, Ben Mundele and Rhys Murrell-Williamson.  The other meetings were in cup ties with Haringey winning 3 times, once in the FA Vase in 1977-78 with Jimmy Wakeling managing Cray Wanderers and his cousin George managing Haringey. Cray won 3-0 in the London Senior Cup in March 2011 in a tie that was played at Beckenham and one other cup tie was drawn.  Meanwhile in November 2019, Haringey Borough beat Cray Wanderers 1-0 at home in the FA Cup 3QR

Haringey Borough were formed in 1973 after a merger of two clubs Edmonton and Wood Green Town and were in the Athenian League until 1984-85 when they joined Division 2 North of the Isthmian League. They remained there until 1989-90 when they entered the Spartan League and won the London Senior Cup in 1990-91 and briefly changed their name to Tufnell Park in 1995. After the Spartan League merged with the South Midlands League in 1998-99 they had a couple of promotions and relegations. For the 2012-13 season Haringey Borough moved to the Essex Senior League where they stayed for two seasons winning promotion in the 2014-15.  In 2015-16 they finished 15th in the Isthmian North where they met Cray in league competition for the first time and the following season they finished 5th reaching the playoffs where they lost to Maldon & Tiptree.  In 2017-18 they finished 4th and reached the playoffs again beating Heybridge Swifts and in the final Canvey Island 3-1 to take their place in the Premier Division. 2018-19 was their first season in the Isthmian Premier and did superbly finishing third and reaching the playoffs where they lost at home to Tonbridge Angels in the Semi-Finals.  They also made national headlines by reaching the 1st Round Proper of the FA Cup and a televised tie which they narrowly lost at home to AFC Wimbledon. In 2019-20 Haringey were 15th when the season ended early and reached the 4QR of the FA Cup while last season’s very shortened season Borough were 11th after eight league games played.

This is always a tough place to go but Cray have restored confidence following last weekend’s results and seem to pull out good performances against higher placed teams this season. 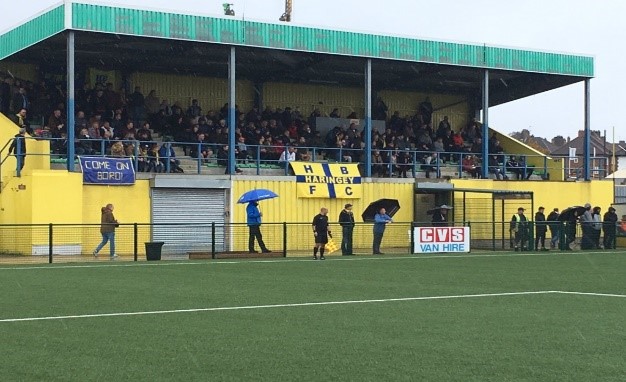 £10 – Adults on gate or www.haringeytickets.co.uk/

PLEASE NOTE THERE IS A £1 AN HOUR CHARGE FOR PARKING AT THE GROUND.

The quickest journey from our neck of the woods should be about 35 miles.

From St. Mary Cray head onto the A2018 and then on to the A2 for 2.1 miles then left lane to take M25 slip road to M20/Dover/Gatwick/Dartford Crossing/Channel Tunnel for 0.3 miles. At Darenth interchange take the 1st exit then for 0.8 miles at Princes Road interchange take 2nd exit onto A282 for 0.9 miles and then keep left staying on A282. After 2.9 miles take the exit towards Dagenham/Rainham/Thurrock/A13/West Thurrock/A126 for 0.4 miles then at Mar Dyke Interchange take 2nd exit onto A13 slip road to London (E&C)/Barking/Docklands/Dagenham/Rainham for 0.2 miles then merge onto A13 for 7.1 miles. Continue straight on to Ripple Road/A13 and follow for 2.1 miles using the left lane to take A406/A1020 slip road to M11/A12/N Circular.

At the roundabout take 3rd exit onto N Circular/A406 heading to A12/M11/Ilford/Barking for 4.6 miles. Continue straight to stay on N Circular RoadA406 for 6.4 miles. Slight left on A10 onto slip road to C London/Dalston/Heathrow/Enfield/M25/Potters Bar/A11 for 0.9 miles. Then at roundabout take 1st exit at Great Cambridge Road/A10 for 0.7 miles then turn right onto White Hart Lane, then a left, then a right and the ground will be on the left opposite a builders merchants between the junctions of Fenton Road and Rivulet Road.

Your best bet is by tube and bus, with the nearest tube station Wood Green (Piccadilly line). There are some engineering works partially affecting the Piccadilly line on Saturday but mainly the Acton-Rayners Lane/Heathrow part of the line.

From Wood Green Tube station, bus W3 from Bus Stop B just a short walk up from the station run fairly regularly on a Saturday afternoon and takes a little over 15 minutes for the journey. Alight at Haringey Borough Bus Stop (WX), cross over the road towards the ground. Unless time on your hands probably best for this option as a reasonable hike up to the ground if you choose to walk it. The best starting option if going by train is via Victoria from Bromley South/St Mary Cray or on the Bexleyheath line. On the Northern Line there is no service between Kennington & Moorgate if you are coming by London Bridge or Waterloo and looking to connect from Kings Cross and catch the Piccadilly line.

There are not too many pubs around the ground but if you’ve time on your hands, in Wood Green there is the Prince on Finsbury Road, a fairly modest looking pub but has a wide selection of ales and may be your best choice. The Liquid Bar on Wood Green High Road might appeal for the more modern tastes. If you want to make a day of it and take advantage of Spurs not being at home in Tottenham itself there is the Antwerp Arms on Church Road, opposite a park and is considered to be a Community Pub. On Tottenham High Road there is the Bricklayers which might appeal to a Tottenham enthusiast as adorned with pennants, scarves and memorabilia. Otherwise the club house at the ground should satisfy you enough.

If you are looking for a chippy then probably the nearest is the Dolphin Fish Bar on Great Cambridge Road or nearer Wood Green station there is John’s Fish Bar on Lordship Lane. For an Indian Restaurant there is the Paramount Tandoori on Wood Green High Road.

Haringey is a North London borough which as well as Tottenham Hotspur being a major part of the Borough’s culture, Haringey is also the home of the London Scholars Rugby League team who play just down the road from Coles Park and our esteemed programme editor, Mr Phil Babbs will be able to regale you with many stories of their fortunes as a big supporter of the club and a regular watcher. If you are making a whole day of it the borough is also home of Alexandra Palace, the swish residential tower blocks, Highpoint I & II, designed by Berthold Lubitkin. There is Bruce Castle which is more of a Manor House than an actual castle which is on Lordship Lane in Tottenham, and close by are Muswell Hil, Crouch End and Highgate. The borough of Haringey was formed in 1965 following the merger of three municipal boroughs, Wood Green, Hornsey and Tottenham.

If you like classical culture on Archway Road is Jacksons Lane Arts Centre, a converted Methodist church which is an iconic theatrical location and many up and coming acts in comedy, acting and dance have started out there. Tottenham is also the home of one of the most successful British singer-songwriters of modern times, Adele and perhaps the most famous band to come from Tottenham were the Dave Clark Five who reached no 1 in 1964 with Glad All Over.