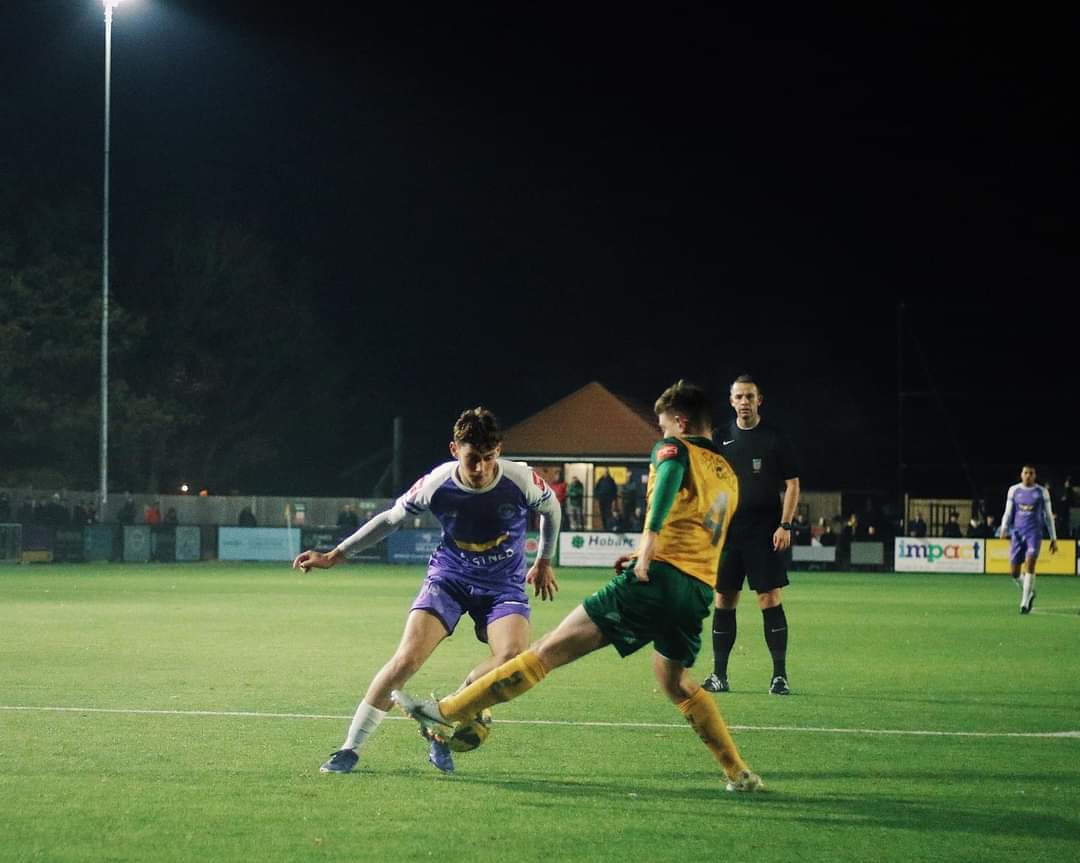 Cray Wanderers remain 9th in the Isthmian Premier League table after coming back from 0-2 down after 15 minutes to pick up a point at 8th placed Horsham.

A lively game was expected and didn’t disappoint although Horsham looked to have a grip on the game after goals from Lee Harding and Jack Mazzone in a three minute spell gave them a two goal lead at the break.

Cray though have shown resilience away from home this season and pulled a goal back from the penalty spot six minutes after half time when Anthony Cook scored his second goal of the season after Tom Derry was brought down in the box.

The Wands pressed for a leveller and came in the 73rd minute when Ben Krauhaus picked up a loose clearance and found Nyron Clunis down the right of the area who slotted home his second goal of the season and despite scares at both ends the game ended in a draw.

Cray were looking to bounce back from a disappointing result and display against Wingate & Finchley on Saturday and from that side there were two changes with Harrison Sodje and Yahaya Bamba coming in for Sam Wood and Nyron Clunis.

Horsham were 4-1 winners against Herne Bay on Saturday and made one change with Jack Mazzone in for Tom Richards.

On a dry but rather chilly evening, Cray began the game well edged the opening ten minutes.  Dan Bassett and Bamba combined down the right to set up Ben Krauhaus in the area who looked to find room to shoot just outside the area and couldn’t get a firm connection and the ball was cleared.

Then Krauhaus won a corner down the left and Anthony Cook’s cross to the far post was met by a firm header from Jalen Jones but Harvey Sparks cleared the ball off the line. 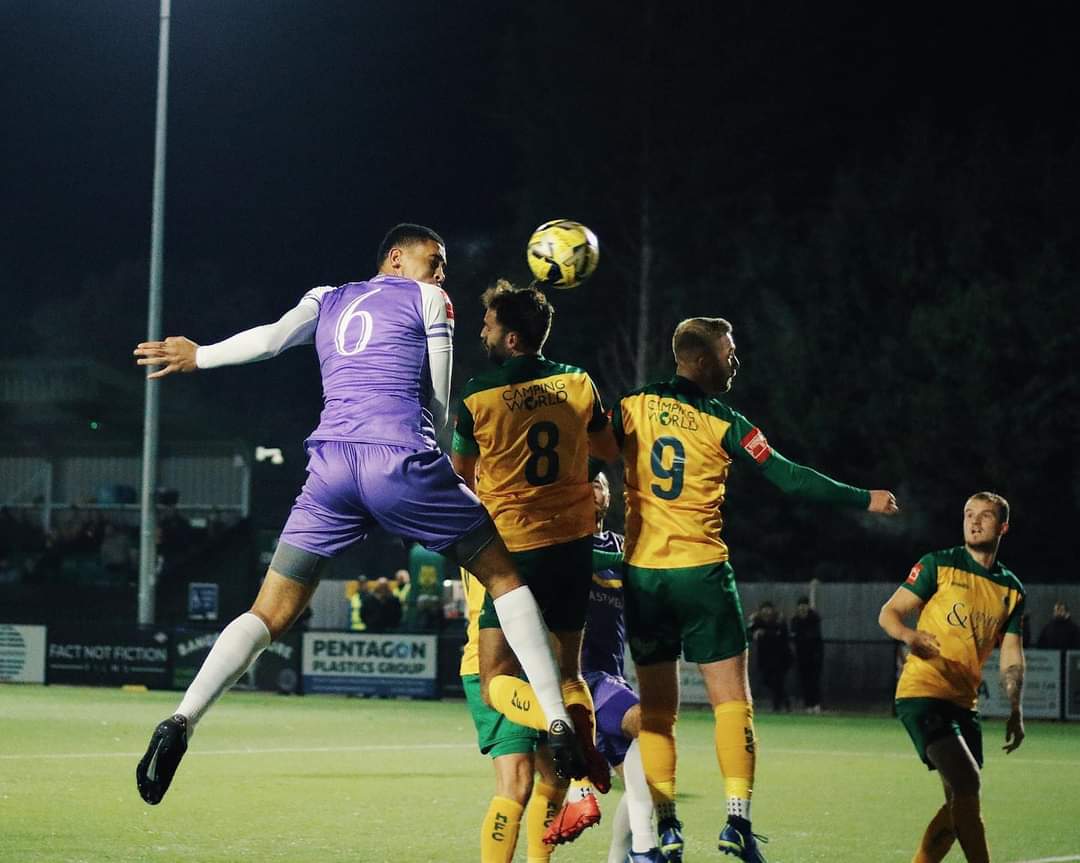 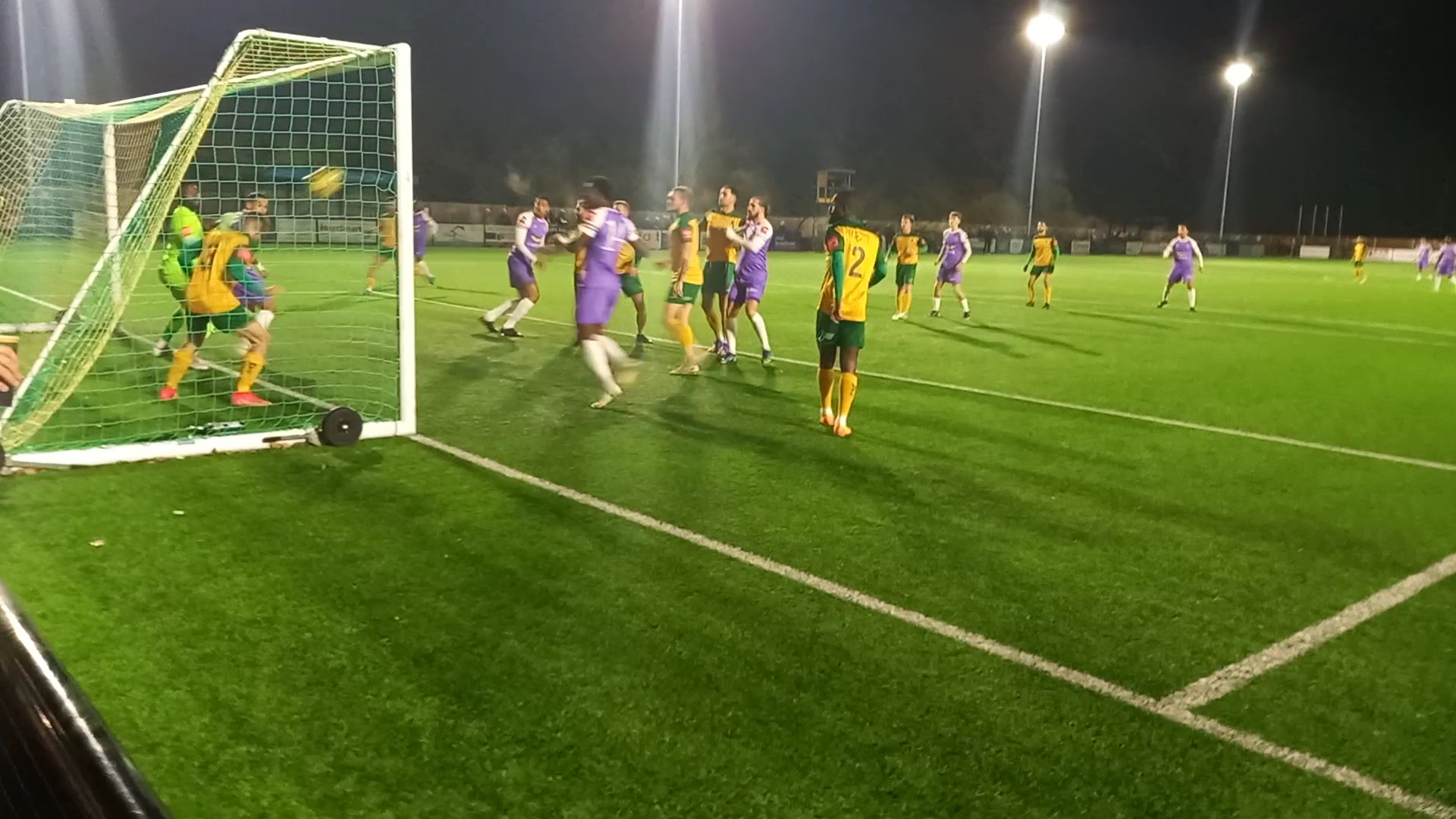 Two minutes later, Horsham when a good ball from Jack Brivio found Mazzone in the box and as Shaun Rowley came to meet the ball squared a pass to Lee Harding to score.

Sparks then fired over for the Hornets from a free kick and Horsham took more control of the game and Shamir Fenelon fired over and then sent over a cross shot which Rowley had to push away.  Then a Mazzone shot was well held by Rowley.

For Cray, Cook’s ball into the area was met by a firm header from Bamba but was claimed by Tangara on his line.

Mazzone curled a fine effort just over for Horsham but Cray were unlucky not to score when Kellen Fisher’s cross from the right came to Cook at the far post and his shot was cleared away almost off the line by Danny Dudley. 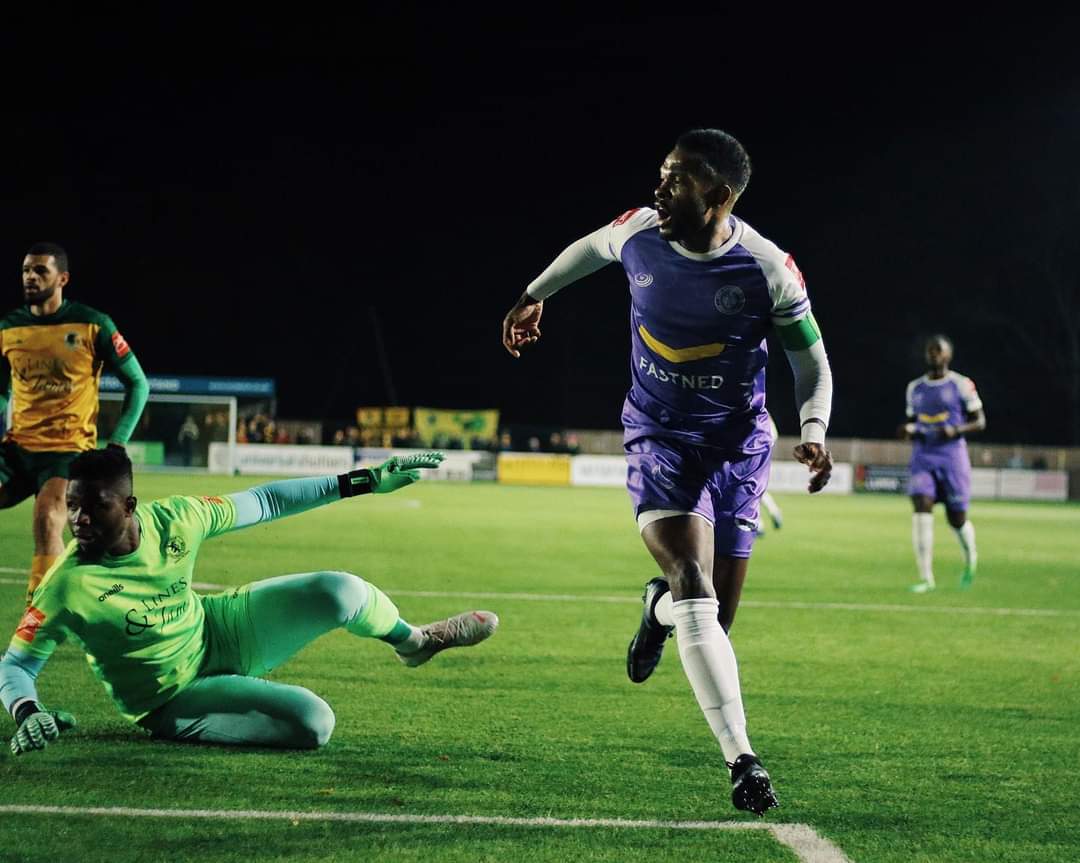 Then from a free kick, to the left of the area, Cook’s shot was held comfortably by Tangara but at half time, Cray had a bit to do to get something out of the game.

Horsham began the second half on the front foot and almost scored a third when Harding down the left broke into the area and his shot was well blocked by Krauhaus in the area and through to Rowley.

The next goal in the game would prove crucial and Cray had the opportunity to get back into the match when Derry who looked to have brought down seconds before was upended in the area by Doug Tuck and a penalty kick was awarded.  Cook scored from the spot to set up the rest of the half perfectly.

Ten minutes after half time, Nyron Clunis came on for Bamba and Horsham sub Eddie Dsane saw an effort blocked down the left and the Wands defence made a number of key blocks and clearances in the second half.

Cray had the chance to level with a free kick  just outside the area and Cook fired just over the top. The game became a little scrappy for a few minutes and Sam Skeffington shot over for Cray as the match went into the last twenty minutes.

In the 73rd minute Cray drew level when a fine ball from the once again excellent Tom Derry from the left was played forward and Sparks header out fell to Krauhaus who set up Clunis down the right of the box who clinically dispatched a shot wide of Tangara and into the net. 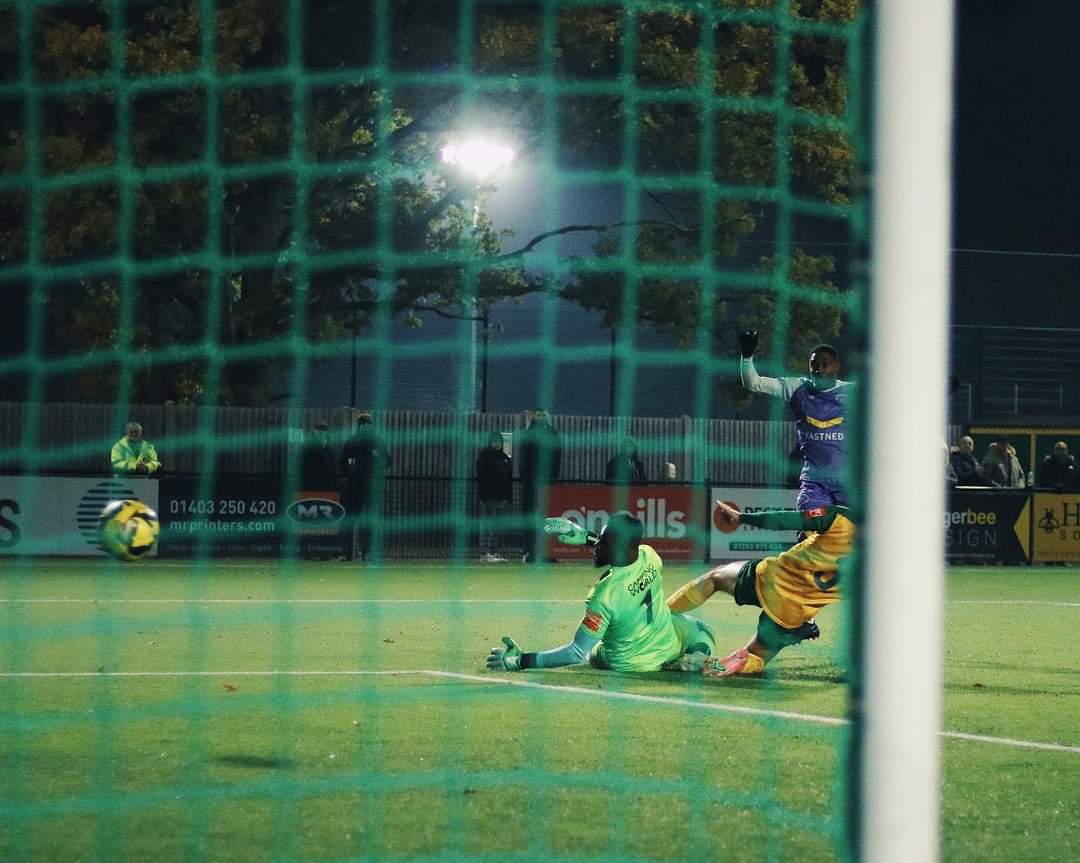 Both sides sought a winner going into the last ten minutes and Krauhaus almost gave Cray the lead when Clunis set him up for a shot which Tangara did well to turn the ball aside. 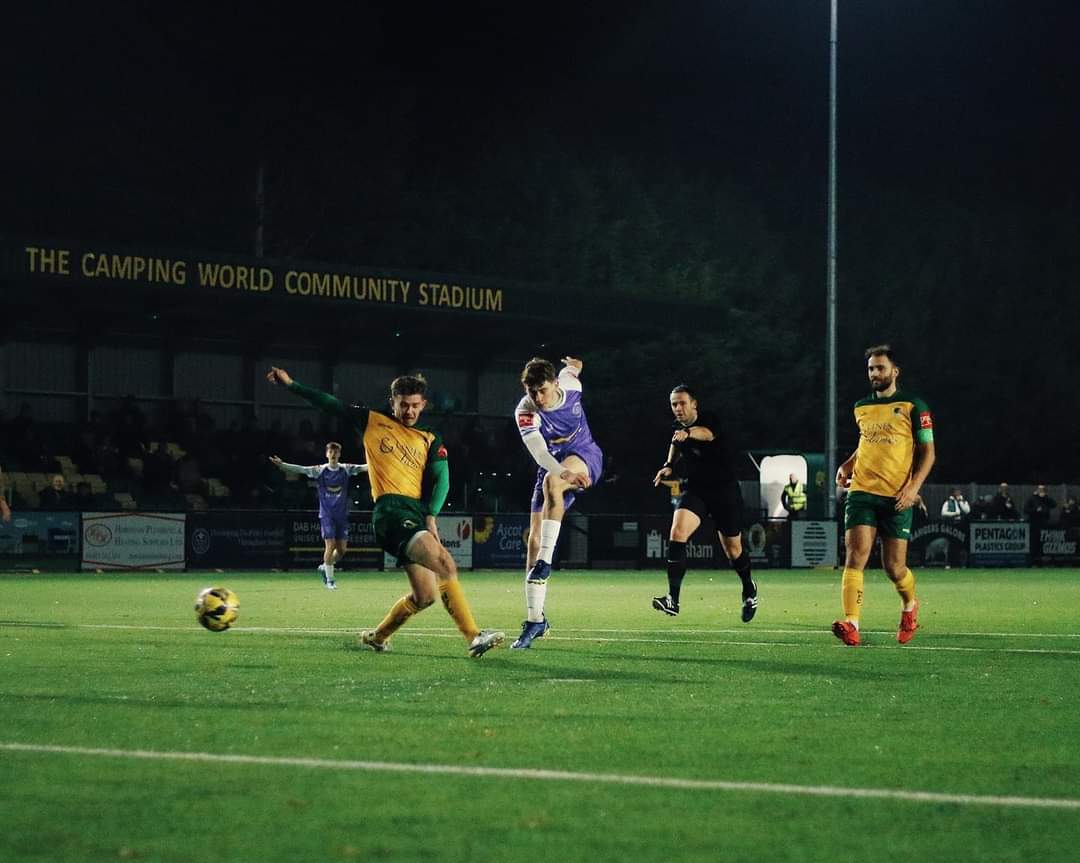 At the other end Dsane down the left was denied by a block from Rowley and Fenelon down the right saw an effort cleared.

There was late pressure from Horsham and a terrific ball across from Sparks down the left just couldn’t get a touch from Harding in the area and went across goal.

In the end though, Cray held on for a deserved point over the course of the game and showed once again their powers of recovery and resolve away from home. The point keeps Cray in 9th on 25 points, level with Horsham but trail on goal difference and both are just four points off the playoff places. 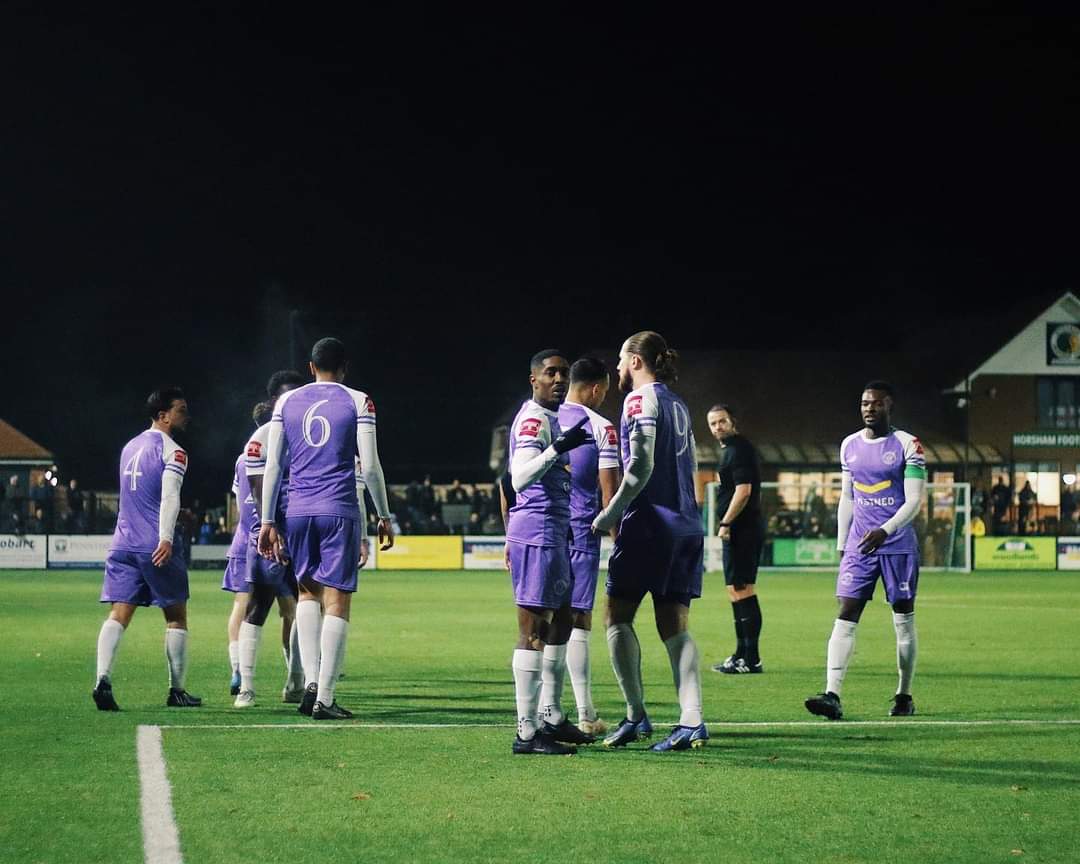 The point keeps Cray in 9th on 25 points, level with Horsham but trail on goal difference and both are just four points off the playoff places.

The Wands next head to 7th placed Carshalton Athletic on Saturday in good heart after a stirring second half display and should be another entertaining game.