Following the late drama of the FA Trophy last weekend Cray Wanderers return to league action on Saturday as a busy spell of games gets under way with a trip to Kingstonian.  Kick off 3pm 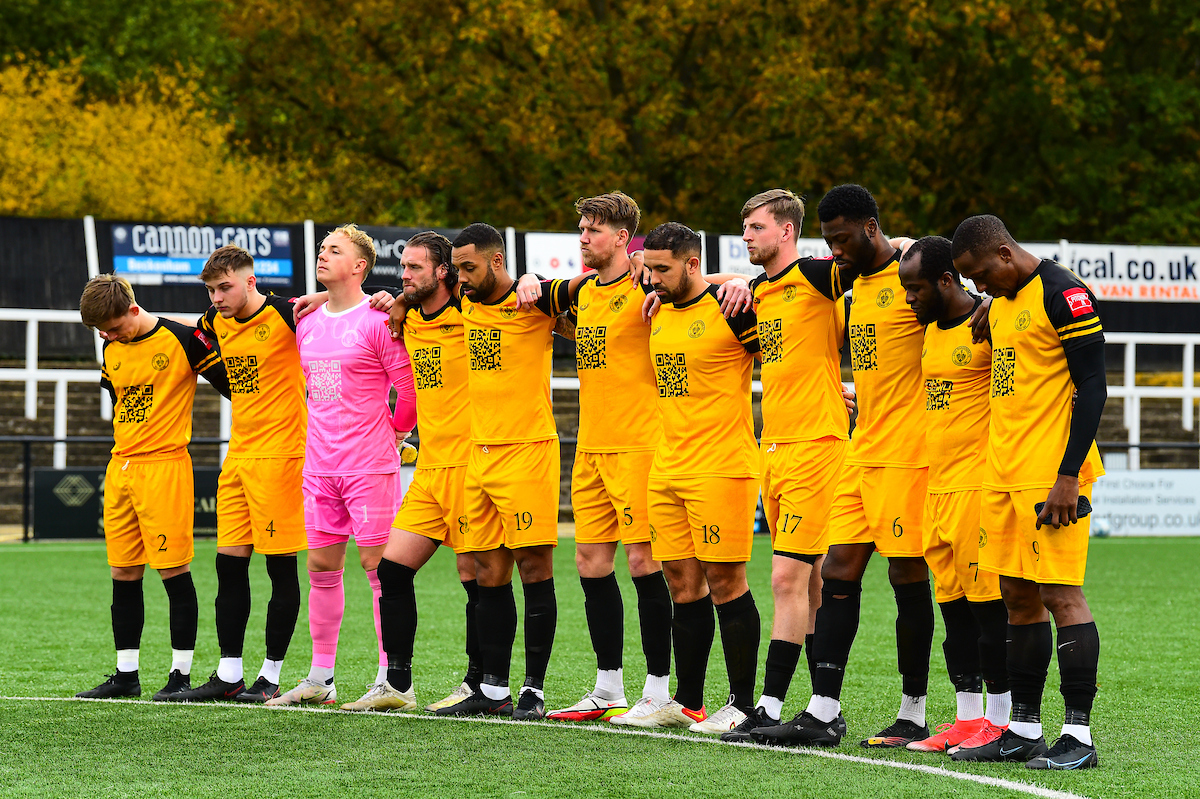 Cray currently lie in 19th place in the table and will be looking to improve their league position and do have games in hand on other sides around them but Kingstonian will prove a stern test.  Danny Kedwell’s side played well last Saturday in a tricky FA Trophy tie with in-form Bedfont Sports and two superb strikes from Adam Coombes including one in the 90th minute edged Cray through when it looked like it would be a penalty shoot-out to decide the tie.  Coombes’ 30   yard lobbed finish earned Cray a 2nd round tie at home to Ebbsfleet United but before that Cray have two tough league assignments against top 5 sides Kingstonian and at home to Folkestone Invicta as league business starts to pick up after a stop-start October-November. 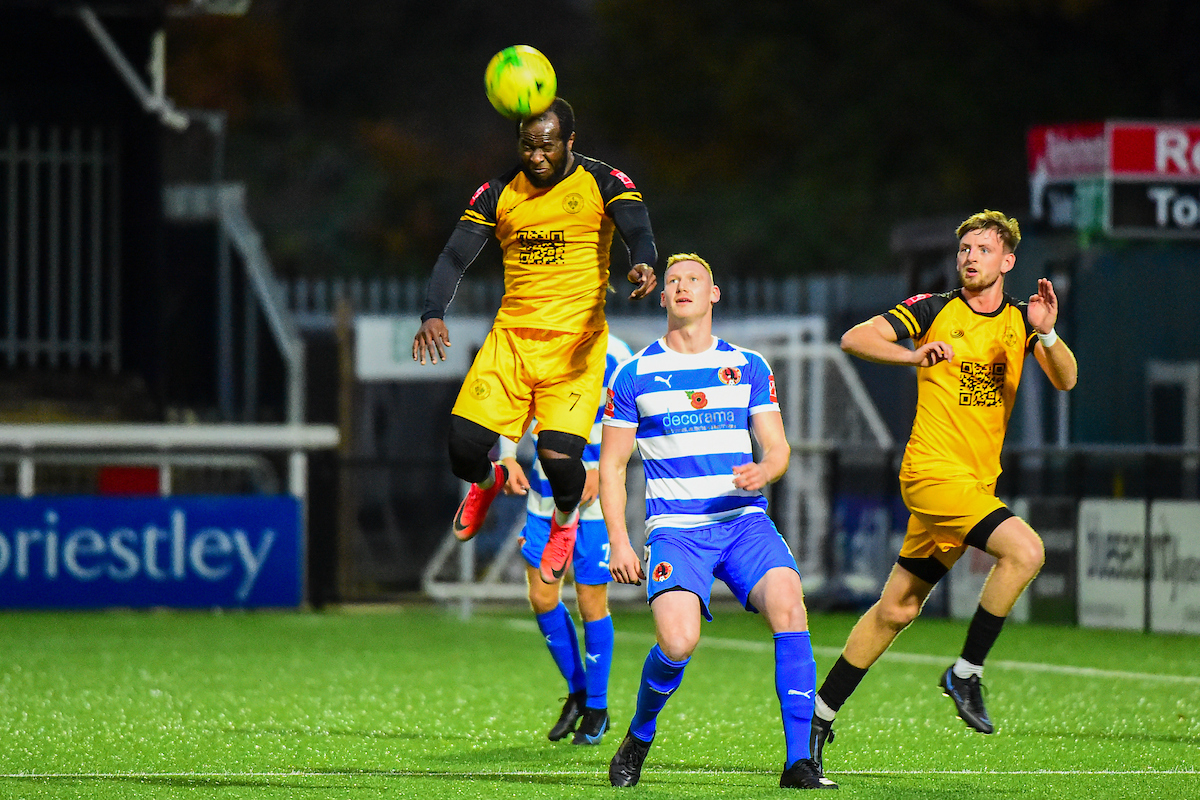 There were many positive signs last Saturday with not only Coombes but also there were stellar performances from Tom Hanfrey, Freddy Barton, Daniel Uchechi, Chris Dickson who all caught the eye and looked solid at the back with Dean Beckwith and Richie Danquah.  The performance was very good in a game where many may have foreseen an upset and gives optimism for the games ahead and also more stability in the team in regards to injuries which hampered the early weeks of the season. Cray have also played well against the sides near the top of the table with wins against Lewes and Hornchurch, both in the top 5 and at Carshalton so can rise 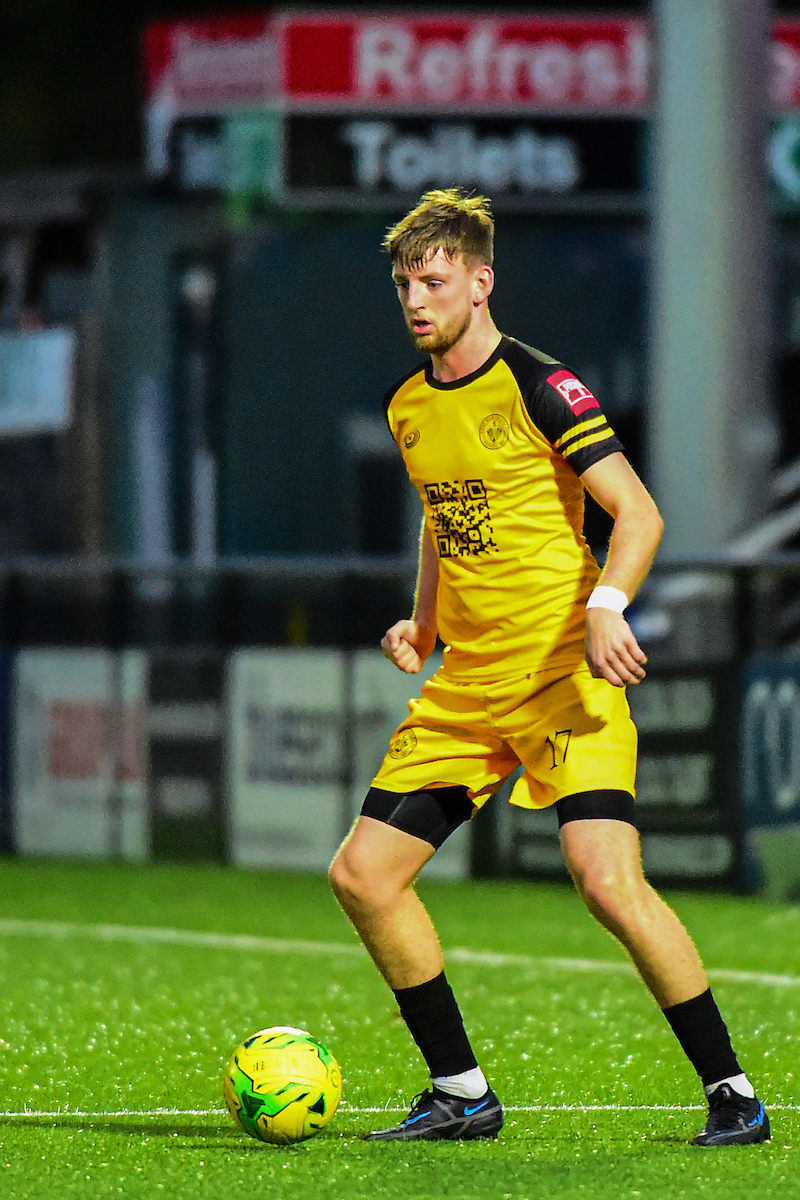 Kingstonian lie 6th in the table level on points with Bishop’s Stortford and three behind second placed Enfield Town with leaders Worthing just starting to forge a gap at the top by eight points. It looked at the start that Kingstonian would be serious contenders as Hayden Bird’s side won their first five league matches and although they have only won three league games since then are very much in the mix for promotion.  Last Saturday, they too had a dramatic FA Trophy tie which required penalties to win at Royston Town after a 1-1 draw after 90 minutes with Gus Sow scoring for the K’s and will now play Farnborough at home in the 2nd Round.  On Tuesday night, they advanced past Banstead Athletic, 4-2 in the Surrey Senior Cup.

Home form has been good with wins against Haringey Borough (1-0), Hornchurch (2-0) , Brightlingsea Regent (3-1), Merstham (4-1) and Horsham (1-0). They drew with Cheshunt (1-1) and have only been beaten by Worthing (3-4). Away from home Kingstonian beat Bishop’s Stortford (5-2), Corinthian Casuals (1-0) & Bowers & Pitsea (1-0), and drew with Bognor Regis (1-1) with defeats at Wingate & Finchley, Enfield Town and Folkestone Invicta.  In the FA Cup, Kingstonian eased past Oxhey Jets 8-1 at home in a 1st Qualifying Round replay before losing to Horsham in the next round also after a replay. In the FA Trophy, Kingstonian won 6-0 at East Thurrock before beating Royston Town on penalties.  Joint top scorers so far are Gus Sow and former Corinthian Casuals striker Daniel Ajakaiye with 11 goals.

Cray have met Kingstonian 21 times in league competition and the Wands have won 4, 7 draws and 10 defeats.  The last meeting was on the opening day of the 2020-21 season on 19th September 2020 with Cray winning 5-1. Amongst the goalscorers were Jason Banton and Rhys Murrell-Williamson who these days ply their trades at Kingstonian. The last meeting at Kingstonian was also the opening day of the 2019-20 season and finished in a 0-0 draw  on 10th August 2019. The sides have also met in a number of cup competitions over the years, including 3 meetings in the FA Cup with Cray winning 4-1 in 2005-06 during the Wands run to the 4th Qualifying Round in a game where both teams finished with 8 men. We’ve also met in the FA Trophy, Isthmian League Cup and London Senior Cup with Kingstonian winning those ties. 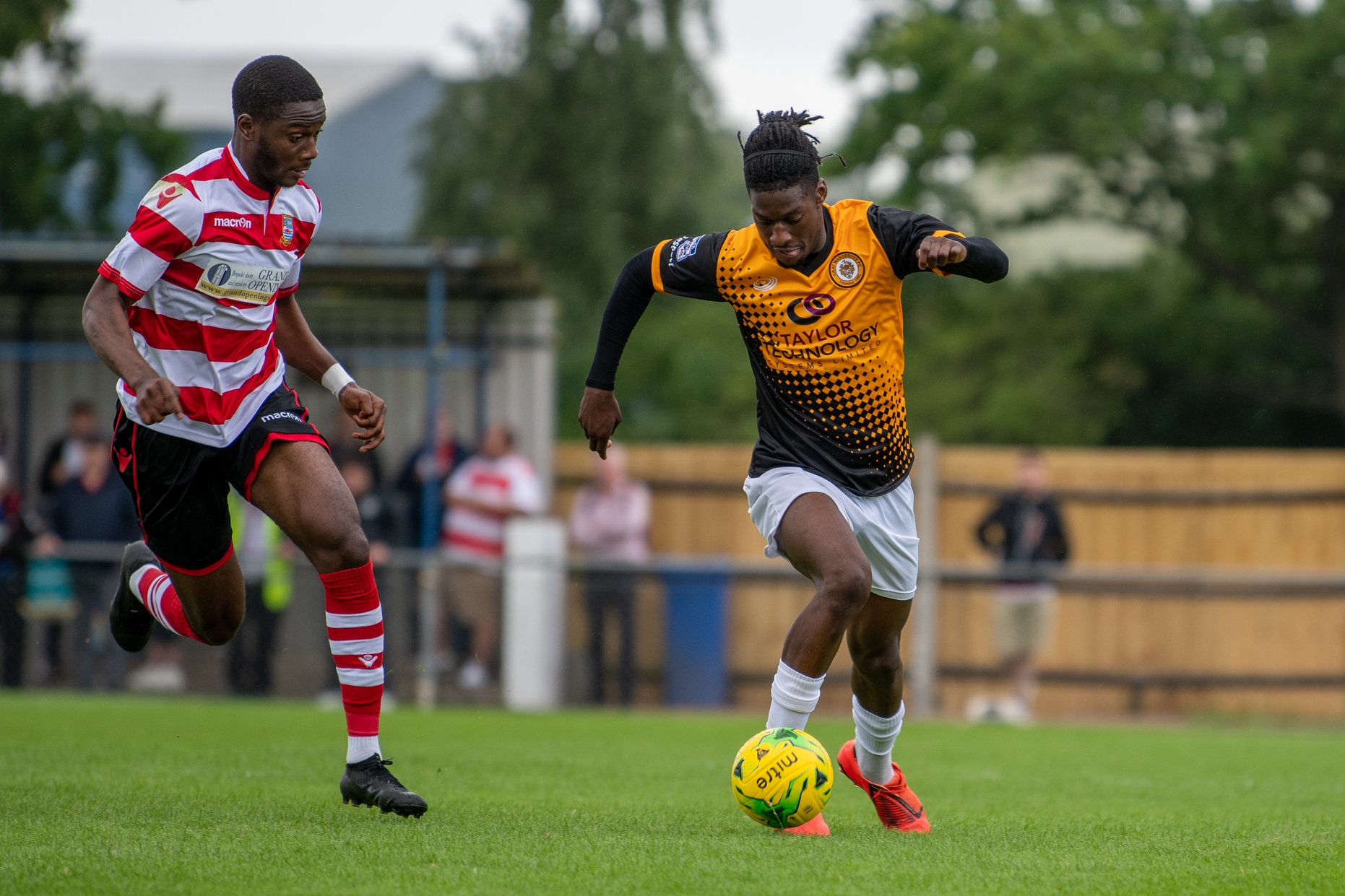 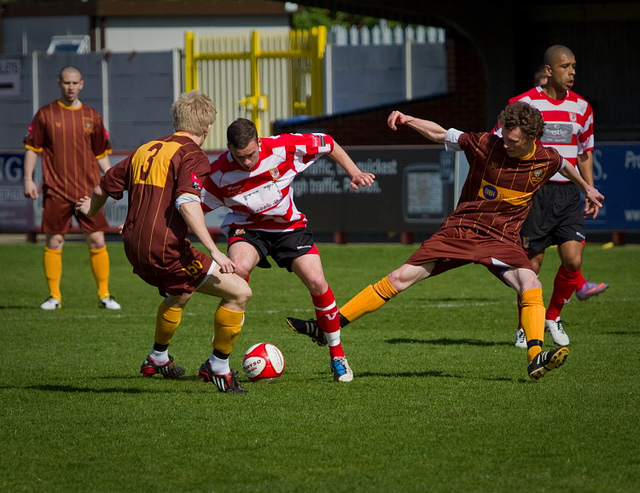 Cray Wanderers in their 150 year anniversary kit in a 4-2 defeat a Kingstonian during the 2010-11 season.

The K’s were formed in 1885 and in 1919 just after World War I became an amalgamation of two clubs Kingston Town and Old Kingstonians.  In 1929 the club were accepted into the Isthmian League where they have but for a short period spent a lot of their history.  In 1932-33 they won the FA Amateur Cup beating Stockton 4-1 in a final replay at Darlington. They reached the final again in 1959-60 at Wembley where they lost to Hendon.

Their golden era came in the late 90’s under the astute management of Geoff Chapple and the team were promoted to the Conference as Champions of the Isthmian Premier in 1997-98.  They remained in the Conference for three years earning a reputation as a great cup side winning the FA Trophy two years in a row in 1999 and 2000 in the last finals at the old Wembley beating Forest Green Rovers and Kettering Town.  The following season despite relegation reached the 4th Round of the FA Cup beating Brentford and Southend along the way before losing after a replay at Bristol City.  They had one or two struggles back in the Isthmian and were relegated to Division One in 2004-05 therefore meeting Cray Wanderers in league football for the first time.  They gained promotion in 2008-09 as Champions with Cray going up in the playoffs. They’ve been in the Premier since then and twice reached the playoffs under Alan Dowson in 2009-10 losing to Boreham Wood in the Final and in 2013-14 in the semi-finals to AFC Hornchurch.  Since the 2018-19 season Kingstonian have ground shared with Corinthian Casuals after leaving their Kingsmeadow ground at the end of the 2016-17 season and spent one season groundsharing at Leatherhead in 2017-18. Kingstonian were 10th when the 2019-20 season ended in March after runs to the 2nd Round of the FA Cup and FA Trophy and were 6th last season before being curtailed.

With both sides looking for points at both ends of the table this should be a competitive and enjoyable game as the Wands embark on catching up with league fixtures. 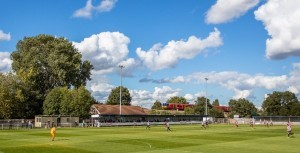 Students on presentation of card: £4.00

The ground is situated just off the A3 not far from the Tolworth roundabout. If you are travelling from the M25 you can join the A3 at junction 10 towards London. Stay on the A3 until you reach the 50mph speed limit, continue under the Hook roundabout and move into the left hand lane for about 174 yards. Bear LEFT onto Hook Rise North for 0.2 mile (Tolworth Junction). At roundabout, take the FOURTH exit (as if you were going to rejoin the A3 going towards Portsmouth) then almost immediately take slip road on left onto Hook Rise South for 0.5 mile.

If you are travelling from London on the A3 take the Tolworth Junction exit. At roundabout, take the SECOND exit (as if you were going to rejoin the A3 going towards Portsmouth) then almost immediately take slip road on left onto Hook Rise South for 0.5 mile.

In both cases please be careful as you may miss the slip road into Hook Rise South.

Turn LEFT into Queen Mary Close. Ground and car park under railway bridge on right hand side. Youth Section pitches and changing rooms are in the park on the left.

Travelling By Train to Tolworth

From London Waterloo take the Chessington South train towards Tolworth.
The ground is situated off Hook Rise South just 10-15 minutes walk from Tolworth railway station. Turn left out of the station and walk up to the roundabout where you should turn left again, past where the Toby Jug pub used to be. Walk alongside the slip road into Hook Rise South. Continue down the road until you reach Queen Mary’s Close, where you will see a small sign for the club. Walk under the bridge and the ground is on the right.

Tolworth lies in the Borough of Kingston upon Thames and is real Surrey suburbia. We’ve visited in recent years when playing Corinthian Casuals or those that remember going to Norbiton to face Kingstonian you may have been through if you’ve been to Chessington Zoo or World of Adventures in the past. Lying so close to places like Kingston-upon-Thames, Surbiton, New Malden and Chessington you could find somewhere fairly close to visit if you have time on your hands. Also there is Kempton Park and Sandown Park racecourses nearby and Hampton Court if you really want to make a day of it and the Surbiton race-way which is a decent race track for youngsters.

Also Tolworth has a massive musical heritage. Both Eric Clapton and Elvis Costello lived there and the now closed Toby Jug pub, played host to David Bowie in one of his earliest Ziggy Stardust live shows as well as Fleetwood Mac, Black Sabbath, Led Zeppelin, Jethro Tull, Genesis and many more of the great names of British rock music.

There are not too many pubs in Tolworth with the Broadway Bar and Café on Tolworth Broadway the nearest to the ground. There is the North Star pub and the Maypole which are in Hook Road, Chessington which isn’t too far and in Surbiton there is the Royal Oak.

For Fish and Chip lovers there is the Superfish restaurant in Tolworth Broadway widely regarded as the best in South-West London or the Tolworth Fish bar which is in Red Lion Road.