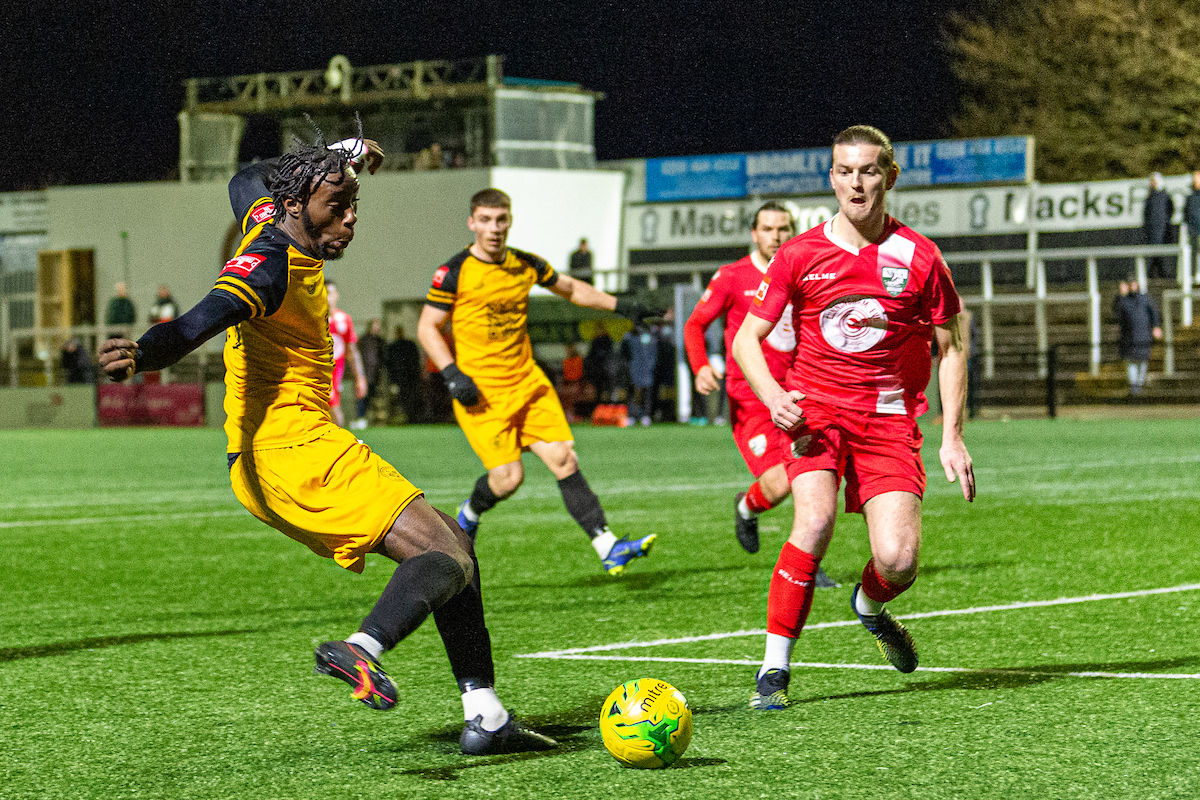 Cray Wanderers go into the final month of the Isthmian Premier Division season still requiring points for survival and on Saturday face their biggest game of the season to date with a trip to Leatherhead who have won three of their last four games.  This will be Cray’s first trip to Fetcham Grove since August 2011.

Cray sit 20th in the table on 32 points and are four points clear of Leatherhead who currently sit 22nd and bottom of the table. Should Cray finish 20th then would go into a PPG comparison with the other similarly placed clubs in the Northern Premier and the two Southern League Divisions with the lowest points per game side going down. At this stage Cray are just ahead on points per game from Kings Langley in the Southern League South. It is a big day down the bottom of the table with East Thurrock United at home to 18th placed Merstham who have 33 points. Brightlingsea Regent also on 33 points in 19th are at home to Corinthian Casuals. 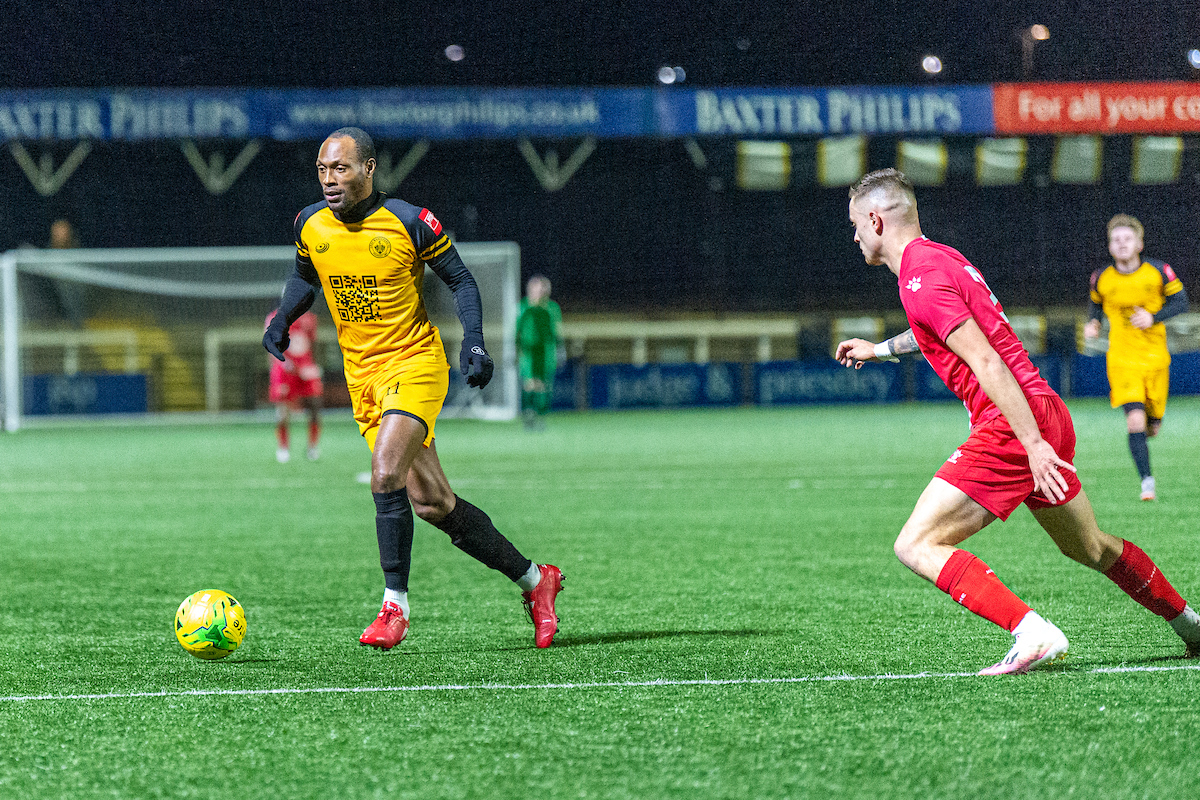 Neil Smith’s side will be looking to bounce back after three successive home defeats in March coupled with Leatherhead and East Thurrock who lie 21st two points behind Cray hitting good form at the right time of the season has made things tight once again.

Last time out Cray were rather unlucky to be beaten by Kingstonian and began and finished the game well but once again were caught out after Anthony Cook’s 13th goal of the season put the Wands ahead, Kingstonian hit back to equalise straight away and after going behind early in the second half couldn’t despite concerted pressure come back to claim a point. 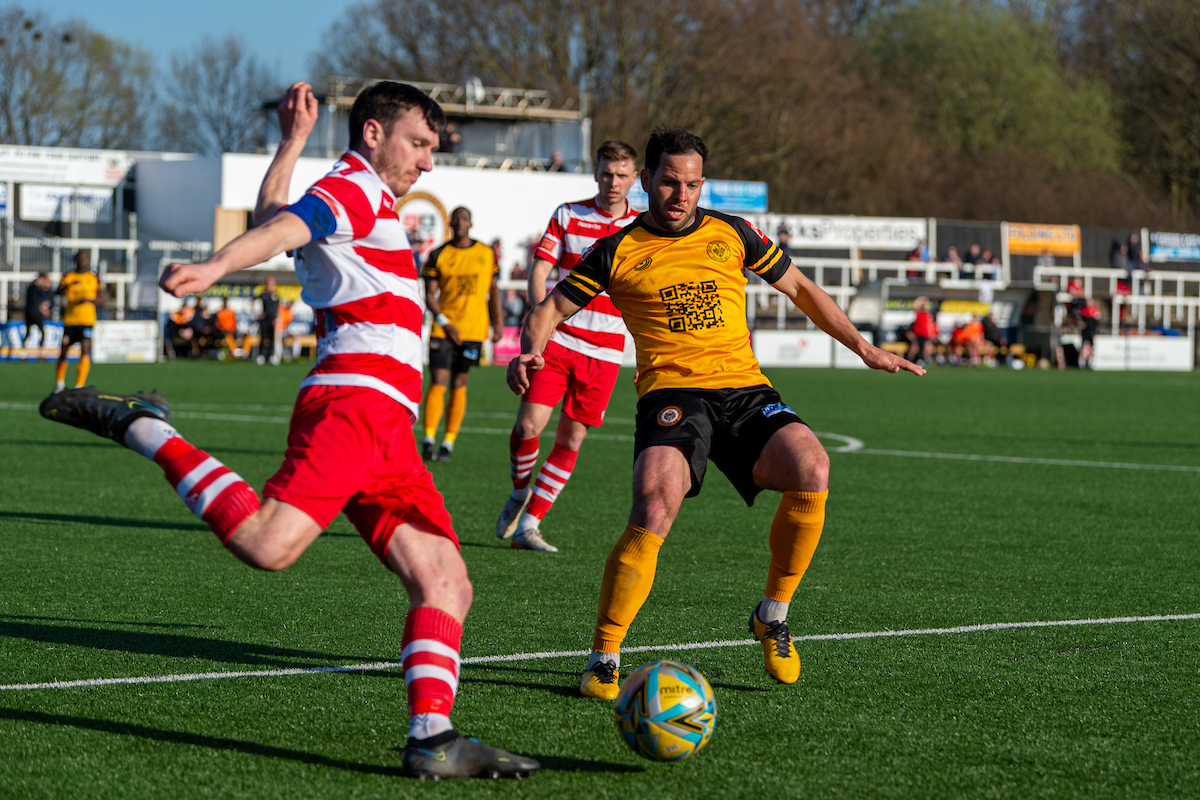 Cray will need to count on experienced campaigners like Cook, Sam Wood, Kyel Reid and Chris Dickson to help what throughout the season has been a very young side especially in the run-in which also includes a home game against East Thurrock but also three games against sides in the playoff places, Hornchurch, Enfield Town and Bishop’s Stortford. Cray’s form against the sides near the top isn’t that bad and beat Hornchurch and Lewes and also drew with Enfield Town and Folkestone Invicta and only narrowly lost to Bishop’s Stortford in December so have been able to raise their game when the chips are down. 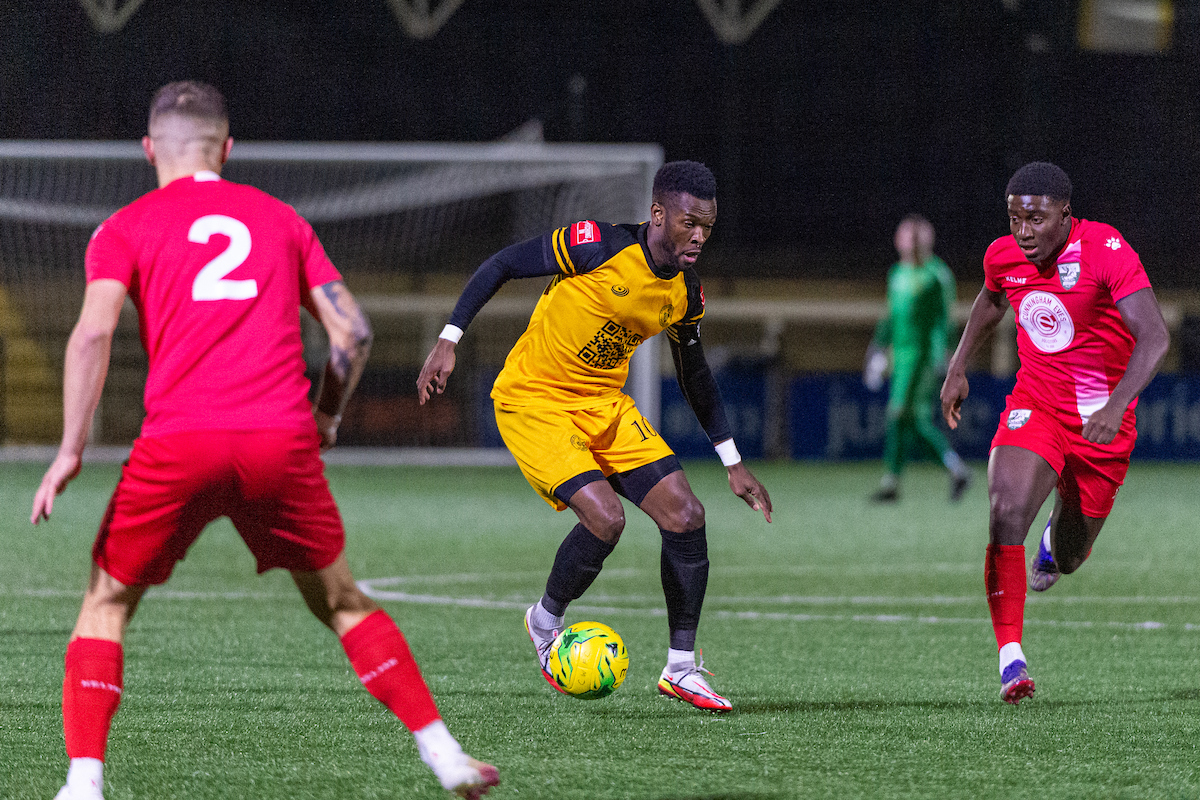 To be fair to Leatherhead they have been in much better form since the start of 2022 and it has been their home form which has perhaps been the reason they have been so lowly in the league. They picked up their first home win on March 19th when they beat East Thurrock United, 3-1. Last Saturday they picked up a gutsy 1-0 win at Horsham through Cameron Black first half goal and played the second half with ten men.

The teams met as recently as January 19th at Hayes Lane and it was a very tense and edgy under the lights goalless draw with chances at a premium.  Luke Tuffs side at home aside from the win vs East Thurrock United have drawn with Haringey Borough (0-0), Bishop’s Stortford (0-0), Margate (0-0) and Bognor Regis Town (2-2). Their other games ended in defeat against Wingate & Finchley (1-2), Carshalton Athletic (0-3), Worthing (0-4), Enfield Town (0-3), Merstham (2-3), Cheshunt (1-2), Corinthian Casuals (0-2), Horsham (1-3), Brightlingsea Regent (0-2), Bowers & Pitsea (0-2), Kingstonian (2-3), Hornchurch (0-2) and Lewes (0-1).  Away from home, the Tanners picked up wins at Bowers & Pitsea (3-2), Potters Bar Town (4-3), Haringey Borough (3-2), Corinthian Casuals (2-1) and Horsham (1-0). They drew at Hornchurch, Carshalton Athletic and Cray Wanderers and were beaten  by Brightlingsea Regent, Margate, Bishop’s Stortford, Bognor Regis Town, Lewes, East Thurrock United, Folkestone Invicta, Worthing, Cheshunt, Merstham and Enfield Town.   Top scorer is Alex Sami with 8 goals. Archie Burnett who had a loan spell at  Cray earlier in the season is on an extended loan from Bromley at Leatherhead and also Palace Francis who made a couple of first team appearances in the 2019-20 season is on loan from Bromley. 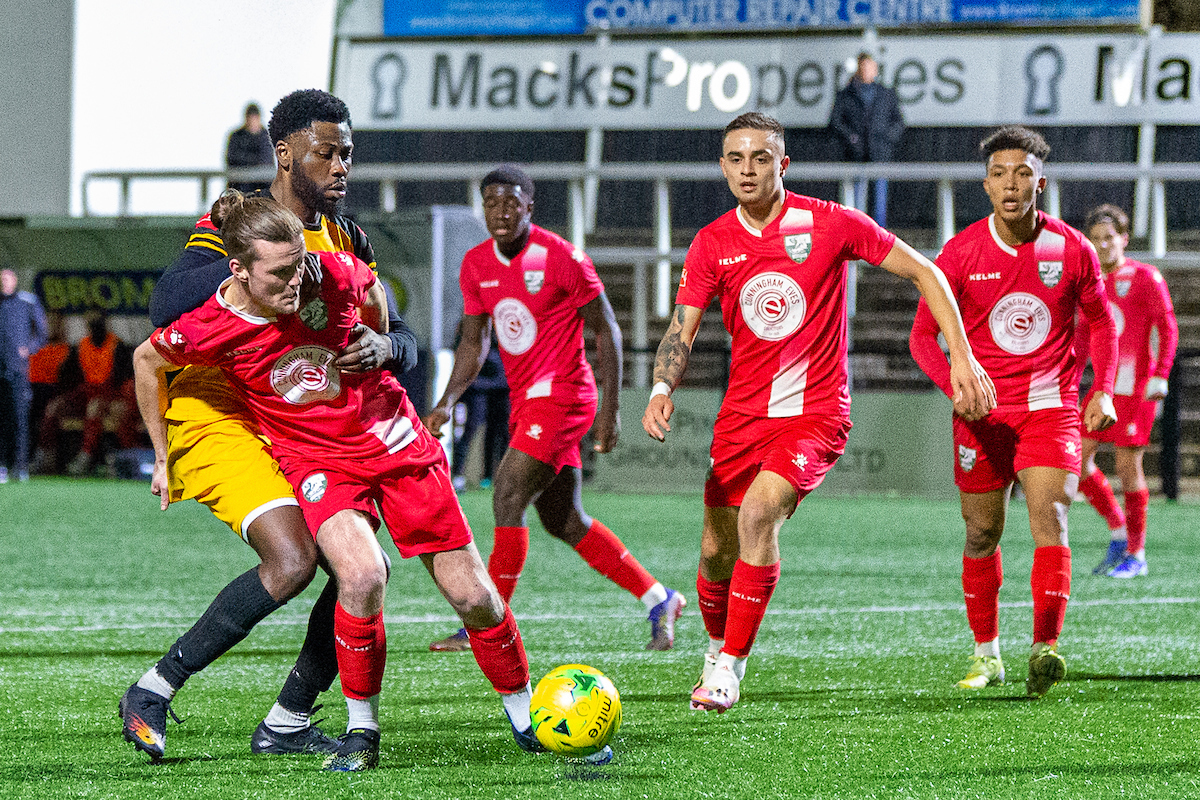 Cray will be looking for a similar result to the last meeting between the sides on 27th August, 2011 also in the Isthmian Premier where Cray won 4-1 with a Leigh Bremner hat-trick and a Tommy Whitnell strike giving Cray their only win against Leatherhead to date.

This promises to be a very tense occasion with so much at stake for both sides and not quite the be all and end all for the losers as still matches to play but does add to the sense of drama. 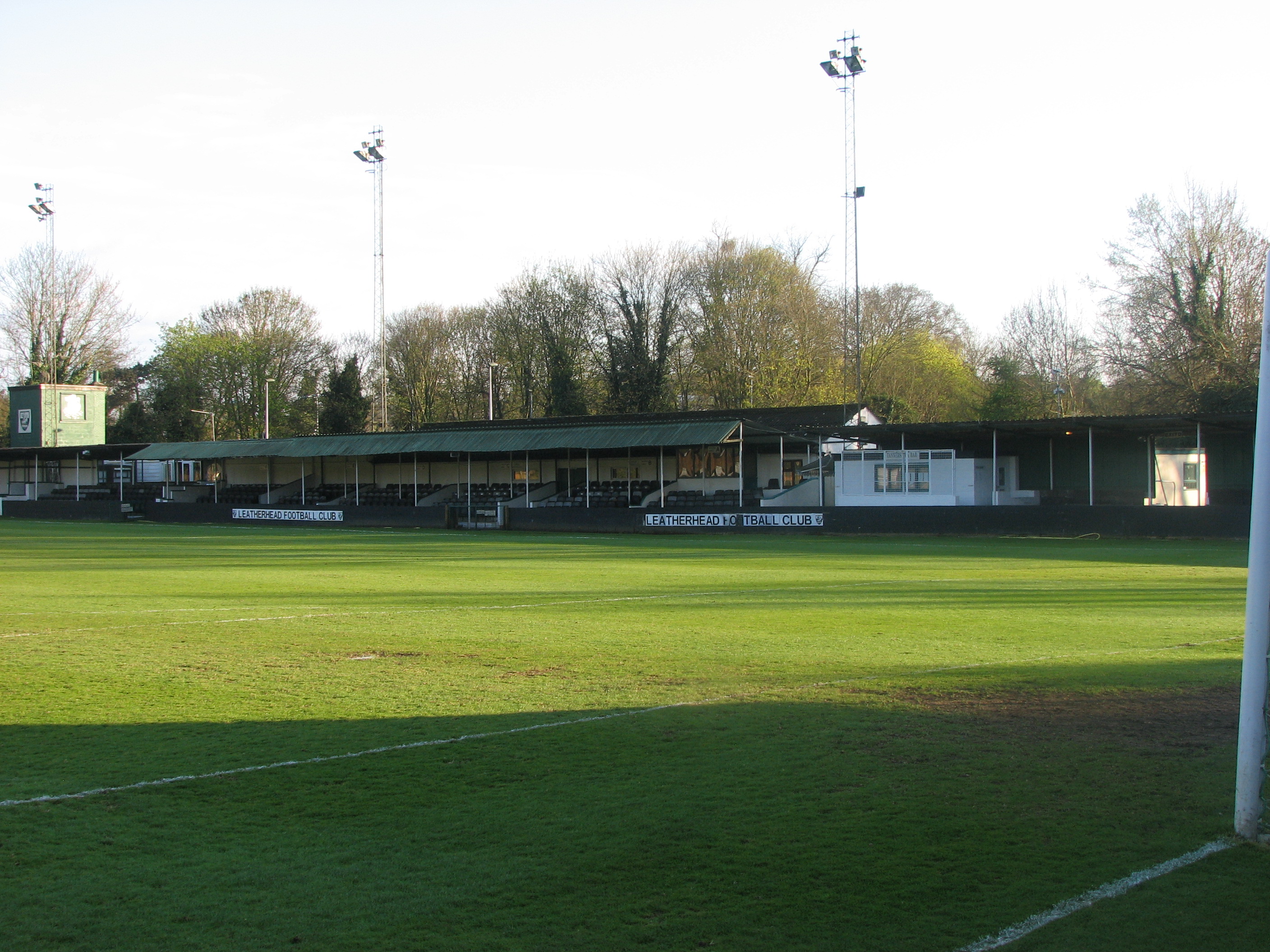 Pay on gate or online at www.leatherheadfc.ktckts.com

For the car parks carry on down the road for a hundred yards and you can park free of charge in the Leisure Centre.

The nearest station is Leatherhead and 0.5 miles from the ground so about a ten minute walk. Leave the station via Station Approach and turn left onto Station Road (A245) and almost immediately right onto Waterway Road (B2122) After 0.3 miles turn left, and left again and the ground will be on the left.

For those who fancy a pre-match pint before the game there are four pubs fairly close to Fetcham Grove. The Running Horse on Bridge Street which is one of the oldest buildings in the town, The Penny Black in North Street, In the  High Street you will find The Dukes Head and the Edmund Tylney (JD Wetherspoon). There are a couple of chippy’s close to the ground with the Golden Plaice and The Fetcham Fish Bar if you are hungry.  As with all the clubs in the Isthmian Premier, the facilities and refreshments at the ground are first class.

Leatherhead lies just off junction 9 of the M25 and in the Mole Valley area of Surrey. It was originally an agricultural town with a thriving market place but in recent times has become more of a commuter town. If you have time on your hands to sightsee there are a number of places to visit. Cherkley Court was once the home of Lord Beaverbrook (Pictured),