Cray Wanderers Remembrance weekend fixture sees the Wands head to Lewes for a match between two sides in good league form with both just outside of the playoff places.  Kick off at the Dripping Pan is 3 pm. 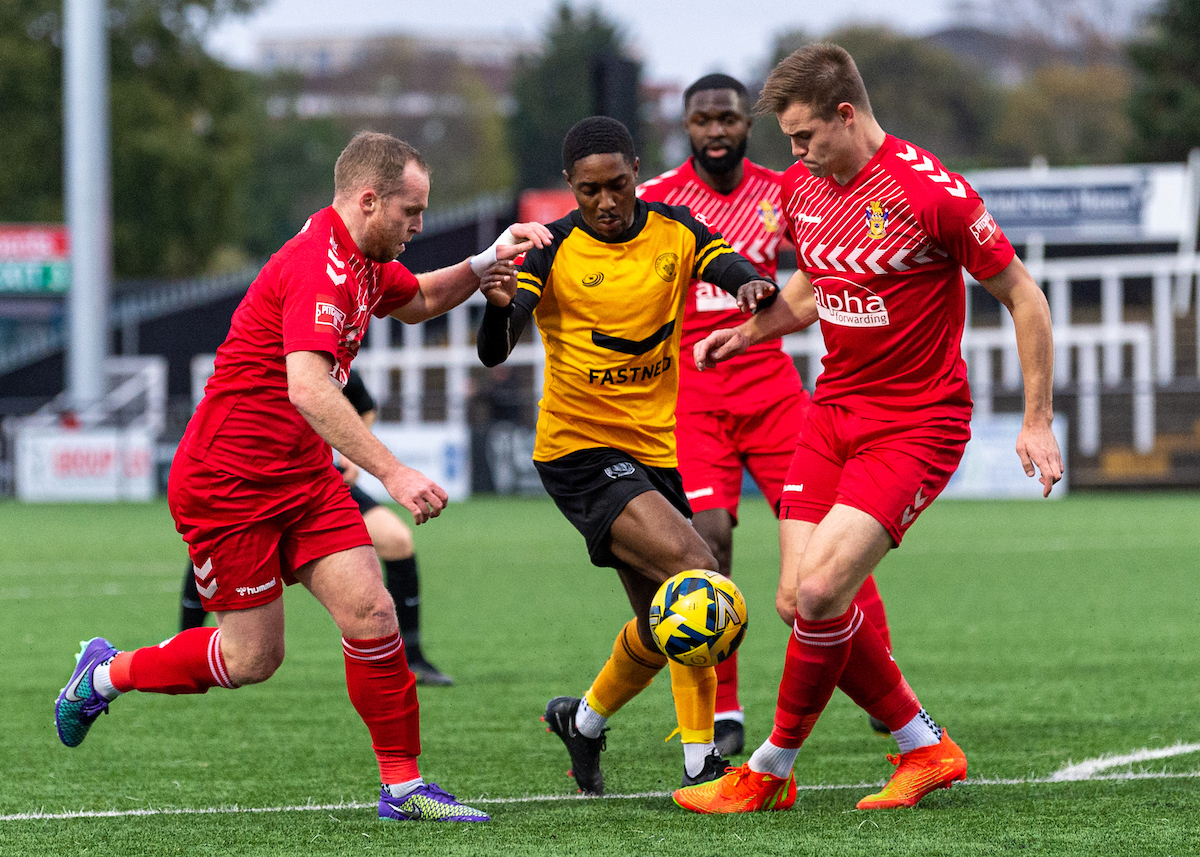 Cray Wanderers are five games unbeaten in the league and are 8th in the Isthmian Premier League table with 23 points following last Saturday’s 2-1 win at home to Aveley.  That was a very professional performance from Neil Smith’s team against a side that had won plenty of games lately and two superb second half goals from Tom Derry and Mitch Chapman helped the Wands to three points. 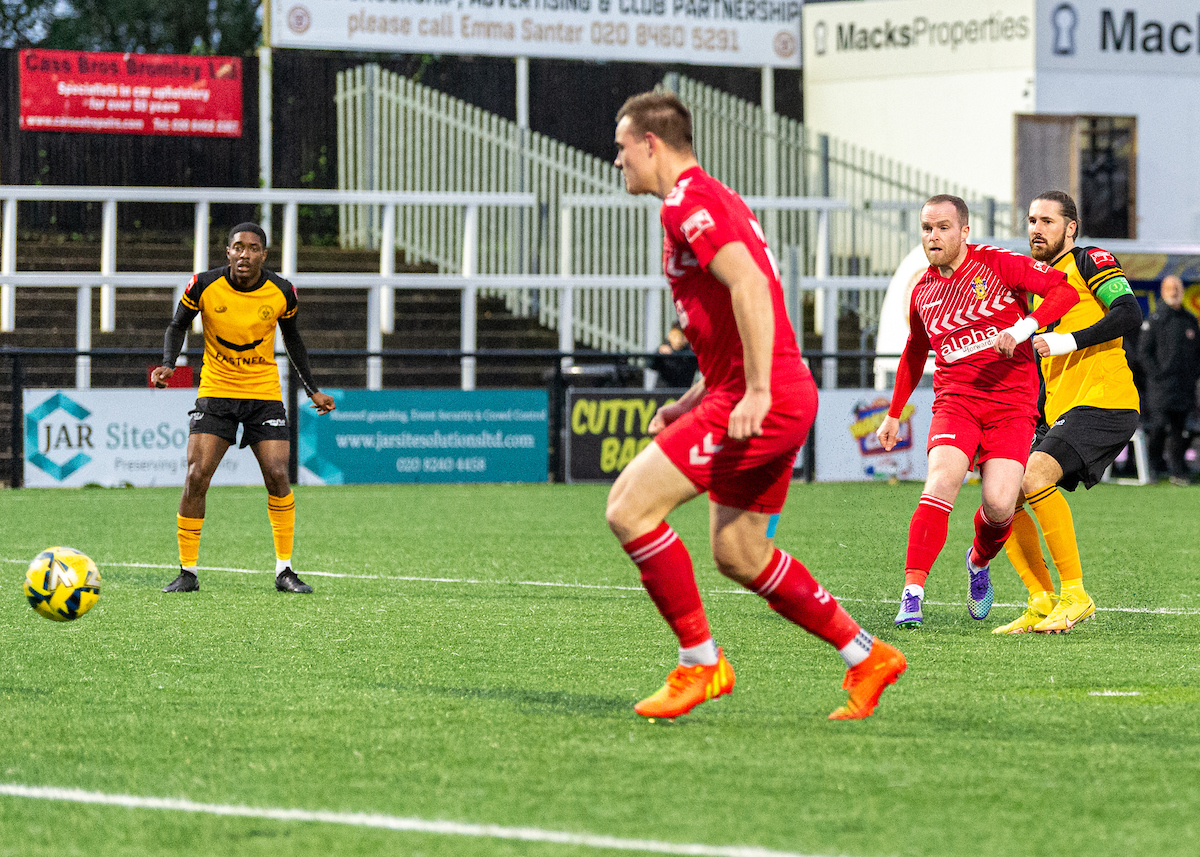 There were excellent performances from the whole team with special word for keeper Shaun Rowley and the back four, Jalen Jones, Freddie Carter and Sinn’Kaye Christie when he came on and the two full backs, Kellen Fisher and Harrison Sodje’s performances belied what was a young back line.  Chapman, Ben Krauhaus, Sam Skeffington gave great energy in midfield and out wide and up front, Nyren Clunis, Dan Bassett and Tom Derry were sharp and added experience. 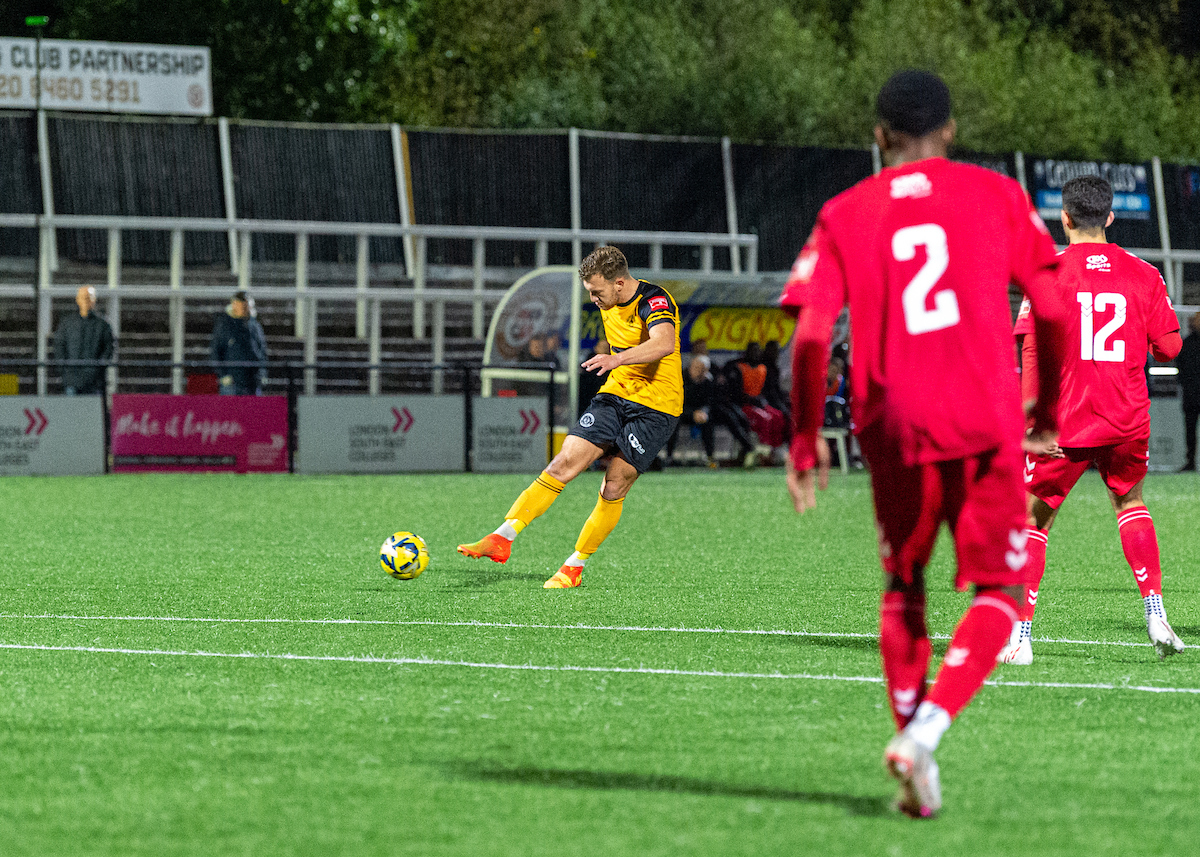 With one more home game before a run of four possibly five away matches in a row (all within the confines of a World Cup tournament taking place for the first time in November/December) these are exciting times to be a Wands fan and a trip to Lewes is a good way to start the late Autumn/early winter run-in. 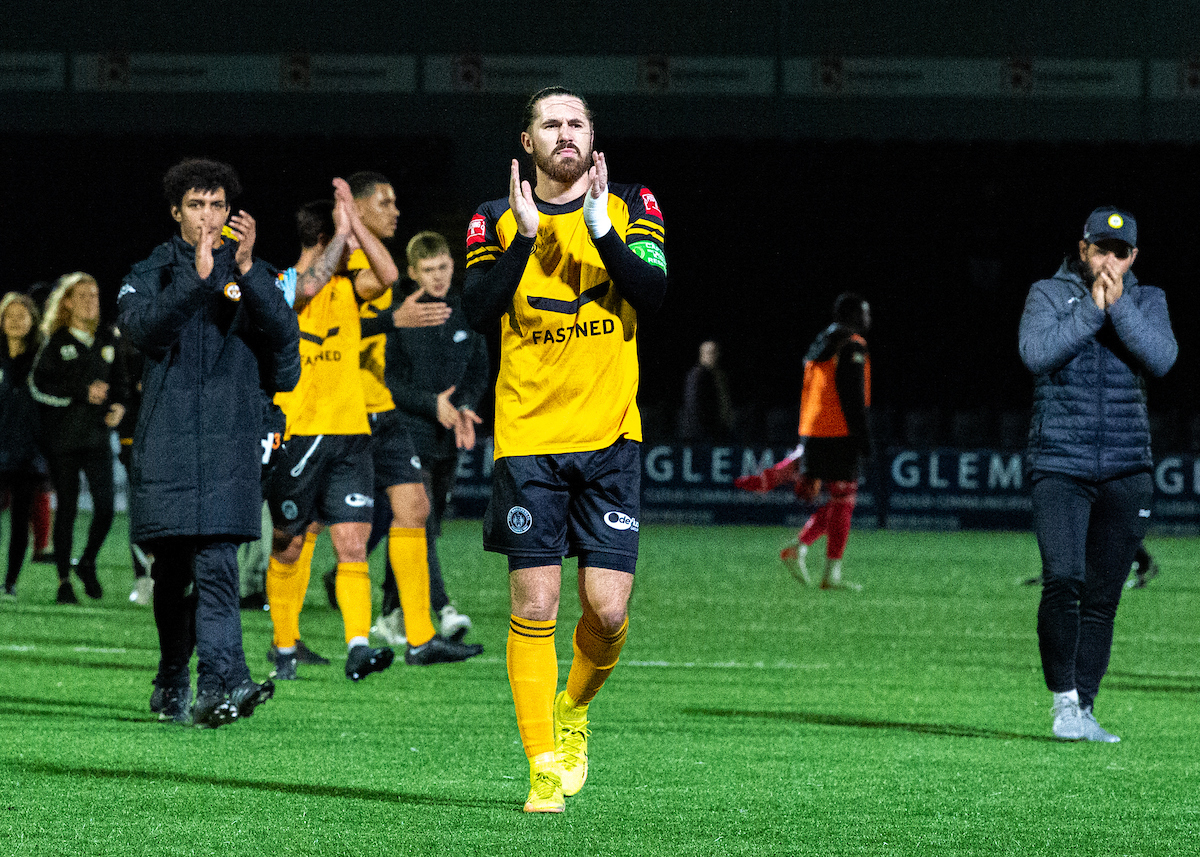 Lewes, although in 11th place on 21 points after losing three league games in a row are now six unbeaten in the league after a 3-2 win at home to Folkestone Invicta on Tuesday night. Both goalscorers need no introduction to Cray Wanderers fans with Joe Taylor scoring twice taking his season tally to 14 in league and cups and Rhys Murrell-Williamson on target.  Lewes are also through to the 2nd Round of the FA Trophy after wins against Sevenoaks Town and Chesham United and face Bognor Regis Town at home next Saturday.

Tony Russell’s side are one of three teams that are unbeaten at home along with Hornchurch and Bishop’s Stortford and have picked up wins against Carshalton Athletic (2-0), Bishop’s Stortford (2-1), Margate (2-0) and Folkestone Invicta (3-2) and drawn with Hastings United (0-0), Hornchurch (2-2) and Aveley (1-1).  Away from home Lewes won at Enfield Town (4-2) and drew at Wingate & Finchley, Corinthian Casuals and Brightlingsea Regent with defeats at Horsham, Billericay Town and Herne Bay.  In the FA Cup after beating Sheppey United after a replay were beaten at Three Bridges in the 2nd Qualifying Round.

Last season’s encounters saw a win apiece with Cray winning 3-1 at Hayes Lane on the opening day of the season with Anthony Cook scoring twice and Jamie Yila on the scoresheet.  Lewes won the corresponding game 2-0 on 25th January.  Lewes were in the race for the playoffs for the majority of last season but in the end finished 7th on 70 points, six behind Cheshunt. 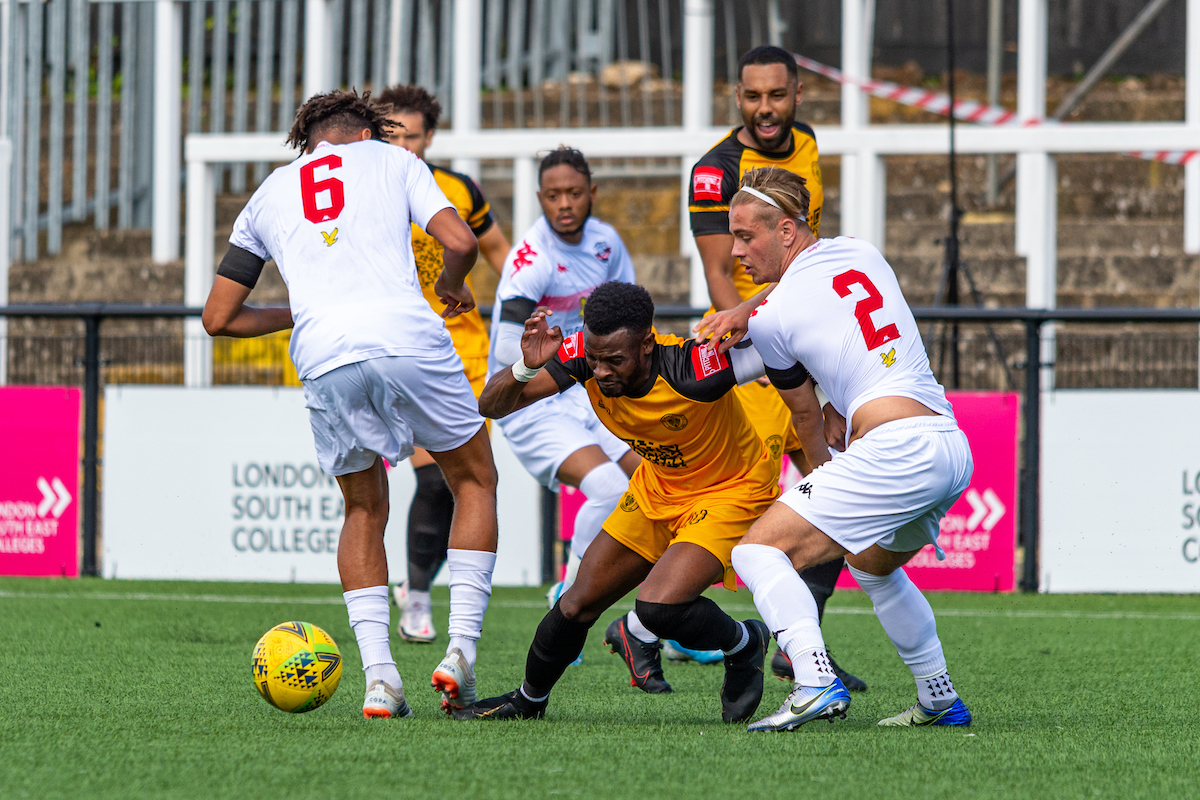 Lewes were founded in 1885 and were members of the Sussex County League from the 1920’s winning the title in 1964-65 and were moved to Division Two of the Athenian League. They were promoted in 1967-68 and two seasons later were promoted to the Premier Division. In 1977 they transferred to Division Two of the Isthmian League earning promotion in 1979-80. They had a meteoric rise following relegation to Division Three in 1993-94 where they stayed until promotion in 2000-01. The following season they won Division Two and also reached the 1st Round of the FA Cup for the first time where they were beaten by Stoke City. In 2003-04 they won promotion from the Isthmian Division One South and after league restructuring following a series of playoff victories were elevated to the Conference South and finished fourth in their first season. After a couple more FA Cup 1st Round appearances in 2007-08 Lewes were promoted to the Conference where they remained for one season. In 2010-11 they were relegated back to the Isthmian League where they met Cray Wanderers in League competition for the first time. They were relegated to the South in 2015-16 before consolidating and then achieving promotion behind Carshalton Athletic to the Premier in 2017-18. Lewes finished 11th in the 2018-19 season and after two Covid affected seasons finished 7th in 2021-22.

Since 2010 the club have been fan owned and also have an equality system with a flourishing women’s team on equal pay with the men’s team. They are a well supported club in an area with many clubs and certainly have lived through some good times and bad times but always will be well backed. 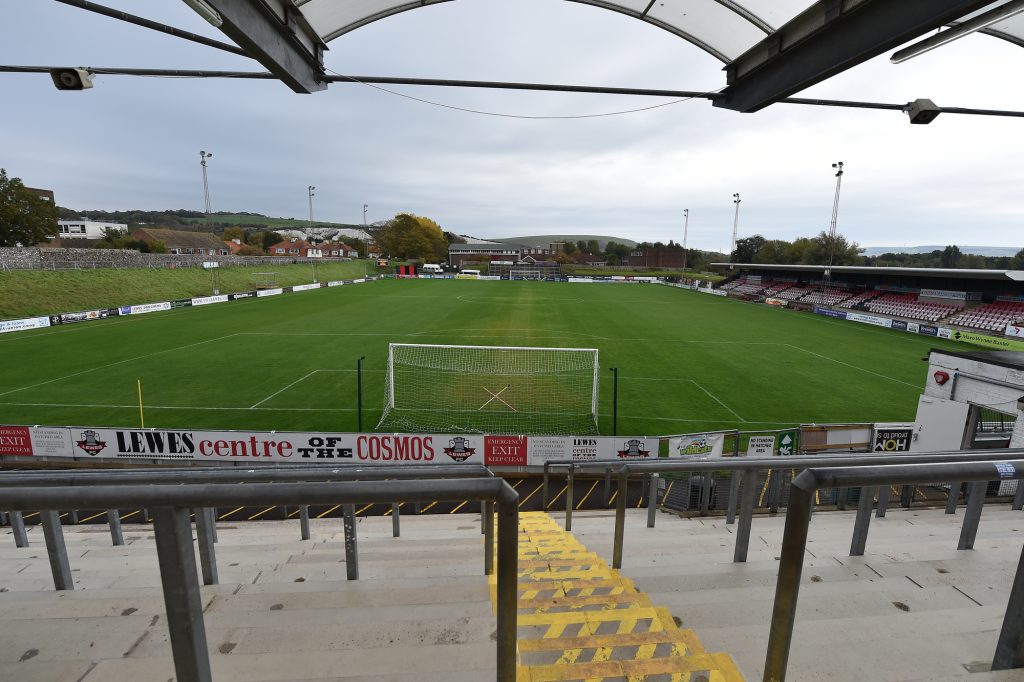 Admission prices: Adults £12
Concessions £8
Under 16s GO FREE – Must be accompanied by an adult

The Dripping Pan is at the very start of Mountfield Road, directly behind the station. If you are coming from the north or west, turn off the A27 for Lewes and turn right (signposted Rodmell and Piddinghoe) after about a mile at the first set of traffic lights, adjacent to the prison. Follow that road until you get to a mini roundabout by The Swan pub and turn left. Continue along this road and over the mini-roundabout straight into Mountfield Road where the ground is on your right hand side.

Metered street parking is available and there is a pay and display car park directly outside the ground (operating 9am-5pm Monday to Saturday) but please be aware that Lewes has quite a number of ‘keen’ traffic wardens patrolling the town so please purchase a ticket where required. To use it, you will also need to have the RingGo app on your phone: iPhone version   Android version

There are two bays in the car park for people with Disability Permits. But it should also be noted that this car park does not belong to the club so unfortunately, we cannot reserve any spaces.

You can get there a bit round the houses by train from Orpington station which requires a change at St Leonards Warrior Square staton (Hastings bound train). These leave at 10 or 40 past the hour and takes 1 hour 15 minutes. From there you can catch a train to Lewes from platform 1 which takes 58 minutes. Returns at 17.15 to St Leonards Warrior Square and at 18.34 a return to Orpington.

Lewes railway station is about a two minute walk from the Dripping Pan. When you exit the main entrance, turn left and follow the path over the bridge then bear left at the roundabout. The ground will be in front of you.

The Dripping Pan is one of the great away days anywhere in football and if you have time on your hands there is much to see. The ground itself is quite unique with its steep banking and legend states the ground gets its name from when the area had a Salt making industry run by monks from Lewes Priory used to dry water from the river to make salf and accounts for the fact the stadium is sunk into the ground.

For those that like a pre match drink then Lewes is the place for you. Similar in many ways to Faversham as it has links to the Brewing industry with the Harveys Brewery a prominent part of the town just by the river Ouse. The nearest to the ground is probably the Lansdown Arms across from the station while the High Street and Southover Road are fairly close to the ground and includes the Brewers Arms, The Royal Oak, The Pelham Arms, The Rights of Man & Elephant & Castle will at least offer you surely something to satisfy. These all come highly recommended and serve real ales and good food with fresh local produce. Please be aware from previous visits and going to the High Street this is a fairly steep and parts cobbly climb so make sure you are feeling fit for the walk.

For those that like a chippy then the Lewes Fish Bar in the High Street could be what you are looking for.

Lewes is a historic market town and the county town of East Sussex.  The town is home to a medieval castle within the South Downs and was used during the Battle of Lewes in 1264. There are remains of Lewes Priory which was part destroyed during the battle and also Wealdon Hall House, a timber framed house which is also known as Anne of Cleves House after Henry VIII’s fourth wife although it is a matter of some conjecture whether she actually visited or stayed at the house. Lewes is also close to the home of the Glyndebourne classical music festival and every November 5th is home to the largest bonfire night celebrations in the UK.

The Dripping Pan is one of the more iconic grounds in non-league football and has been their home since 1885 and has also hosted cricket matches and Athletics down the years. It is believed to have its name deriving from being used as a salt mine for the now destroyed Lewes Priory, the remains of which can be seen adjacent to the ground. Always better to play at Lewes on a Saturday rather than midweek as you can make a good day of it.