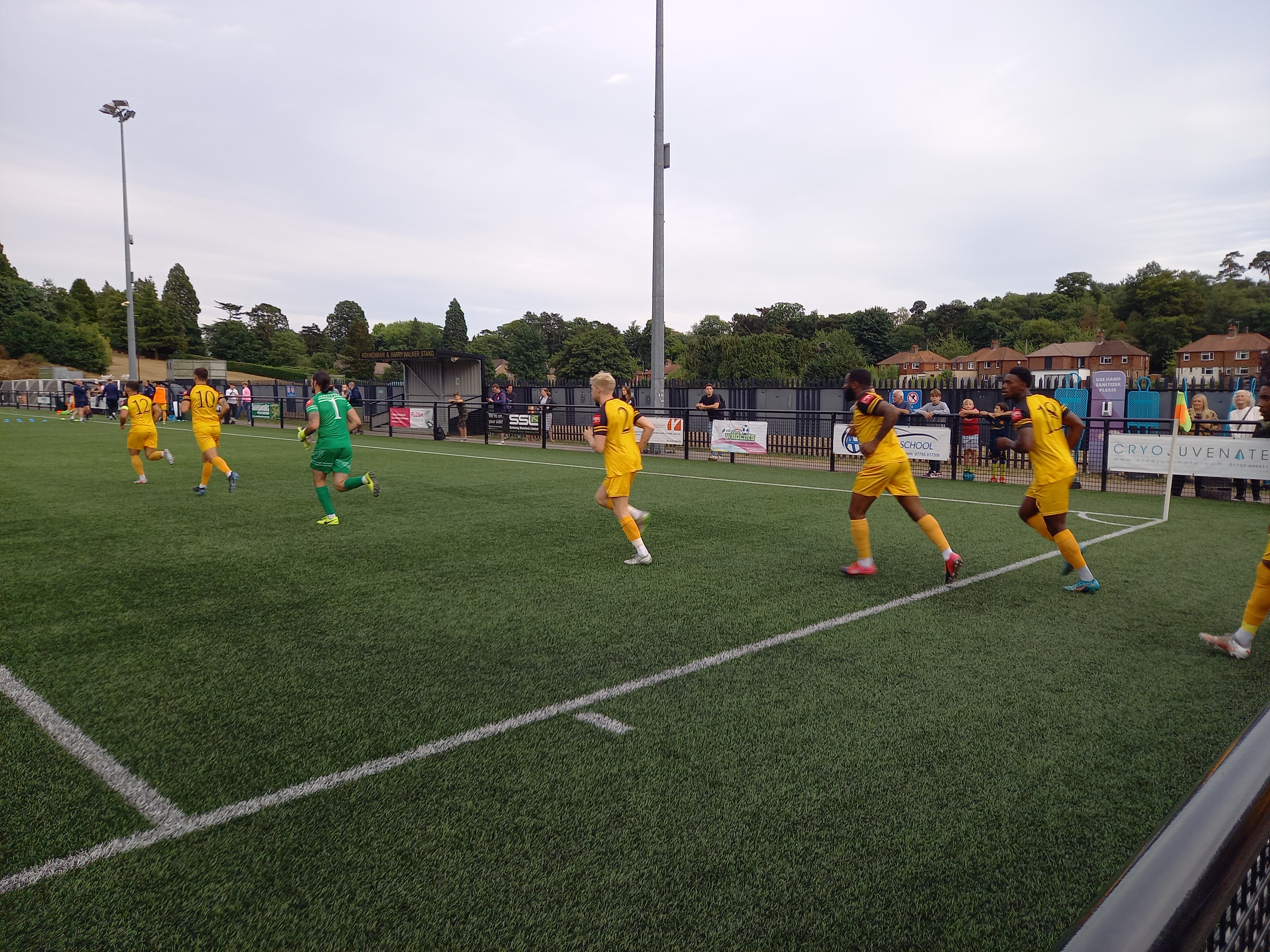 Cray Wanderers pre-season campaign resumed after an 11 day break and ended in a third straight defeat as Sevenoaks Town maintained a 100% winning start to pre-season with an impressive display and scored some fine goals.

Cray had been without a game since the Jersey Bulls Cup 3rd place match on 17th July and in the idyllic surroundings of the Bourne Stadium after a fairly even opening to the match Sevenoaks took the game by the scruff of the neck with two goals just before the half hour.   A high quality free kick strike three minutes after the break effectively ended the contest and Sevenoaks scored a fourth five minutes from time through former Wand, Freddie Parker.  Cray did rally towards the end and pulled a goal back through a trialist two minutes from time. 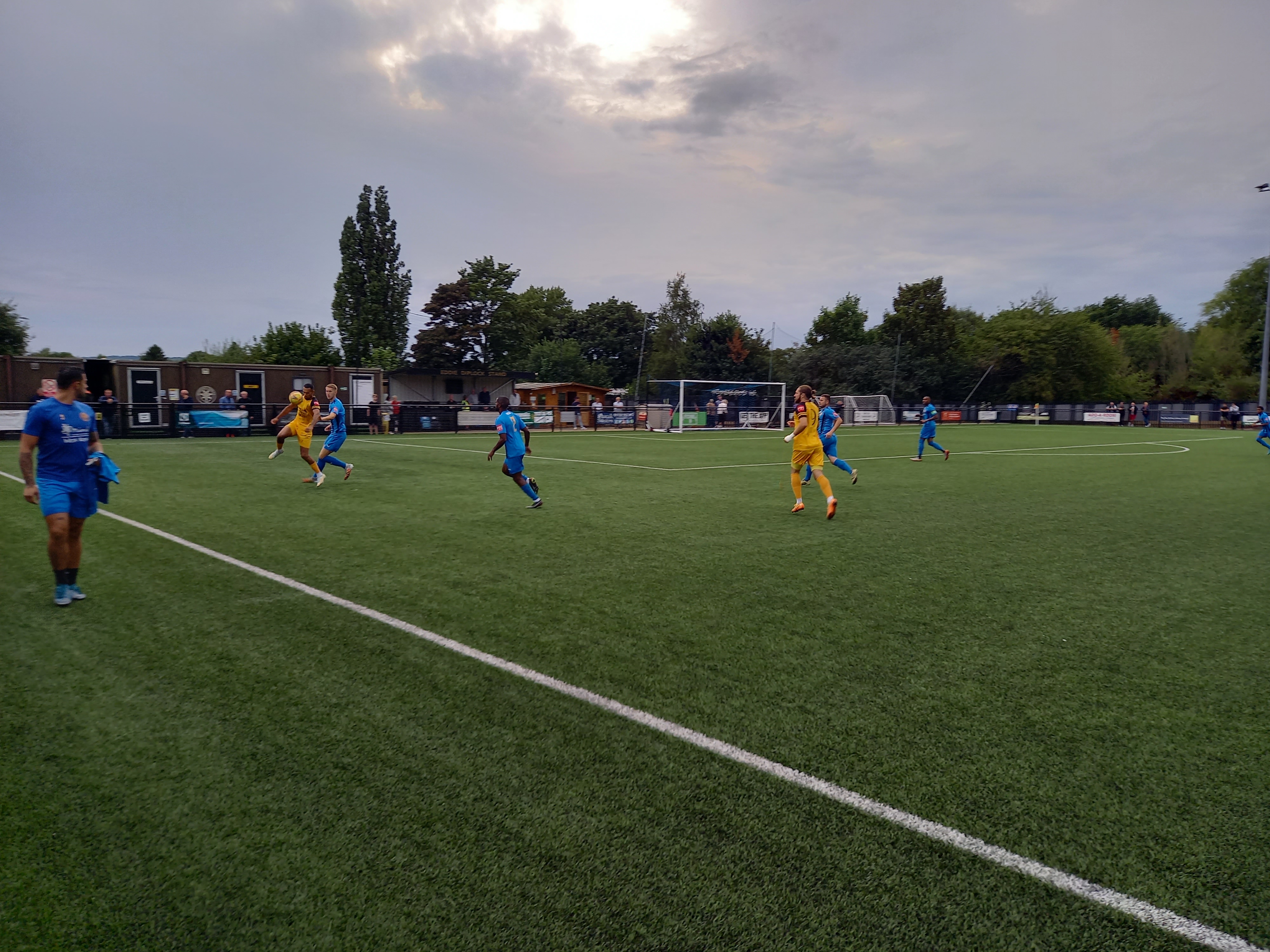 Cray went into the game with injuries to Anthony Cook, Jalen Jones, Freddy Barton and Joey Taylor and were looking to build some sharpness ahead of the Isthmian Premier season which begins on 13th August.

The opening exchanges were lively but not too many openings.  Cray had a half chance when the ball was worked out to the right to Nyren Clunis and Alex Bentley hooked the ball towards goal which the Sevenoaks keeper was able to claim.

Sevenoaks though created the first real opening when the ball was played to the strong no 11 who held off the challenge of Harold Joseph and hooked the ball just over the bar from the edge of the box.  Then a free kick out on the left was played into the area and a Cray deflection saw the ball go over for a corner. 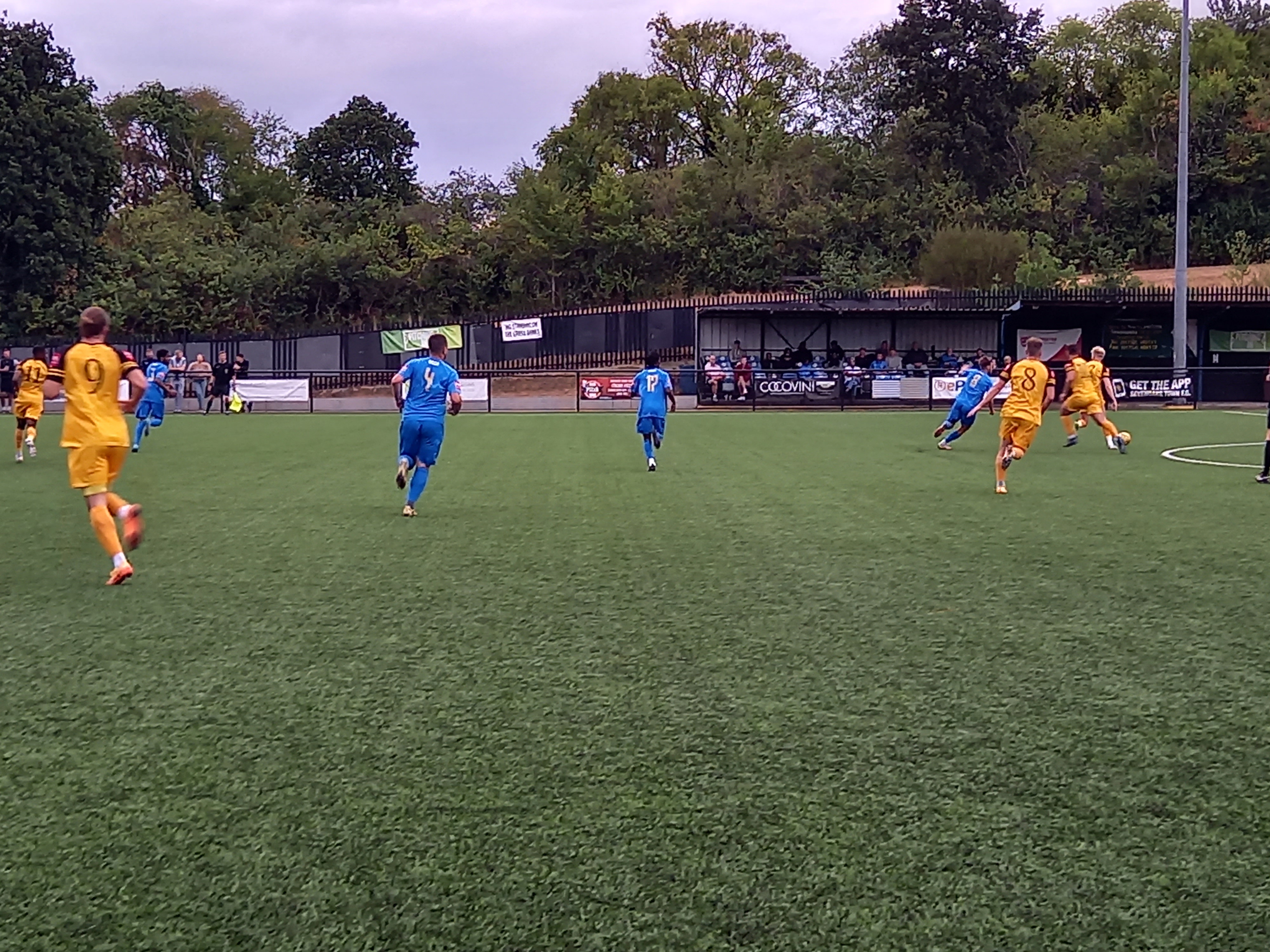 Cray came close when the ball came to Sam Wood who from 20 yards saw his shot go just over the angle of post and crossbar.

Sevenoaks though were having a good spell and the no 10 found the no 8 down the right of the area and his goalbound shot was pushed out superbly one handed by Shaun Rowley.  Then a couple of minutes later the no 10 saw his near post shot turned round the post by Rowley for a corner.

From the resultant corner Sevenoaks took the lead in the 27th minute.  The ball from the right was swung towards the far post and the no 7 reacted quickest to divert the ball into the net.

A minute later, Sevenoaks were starting to take a real grip on the game and the no 11 continued to be a threat and picked up the ball 20 yards from goal and his shot perhaps took a slight touch from Rowley onto the right post and across the line and into the net. 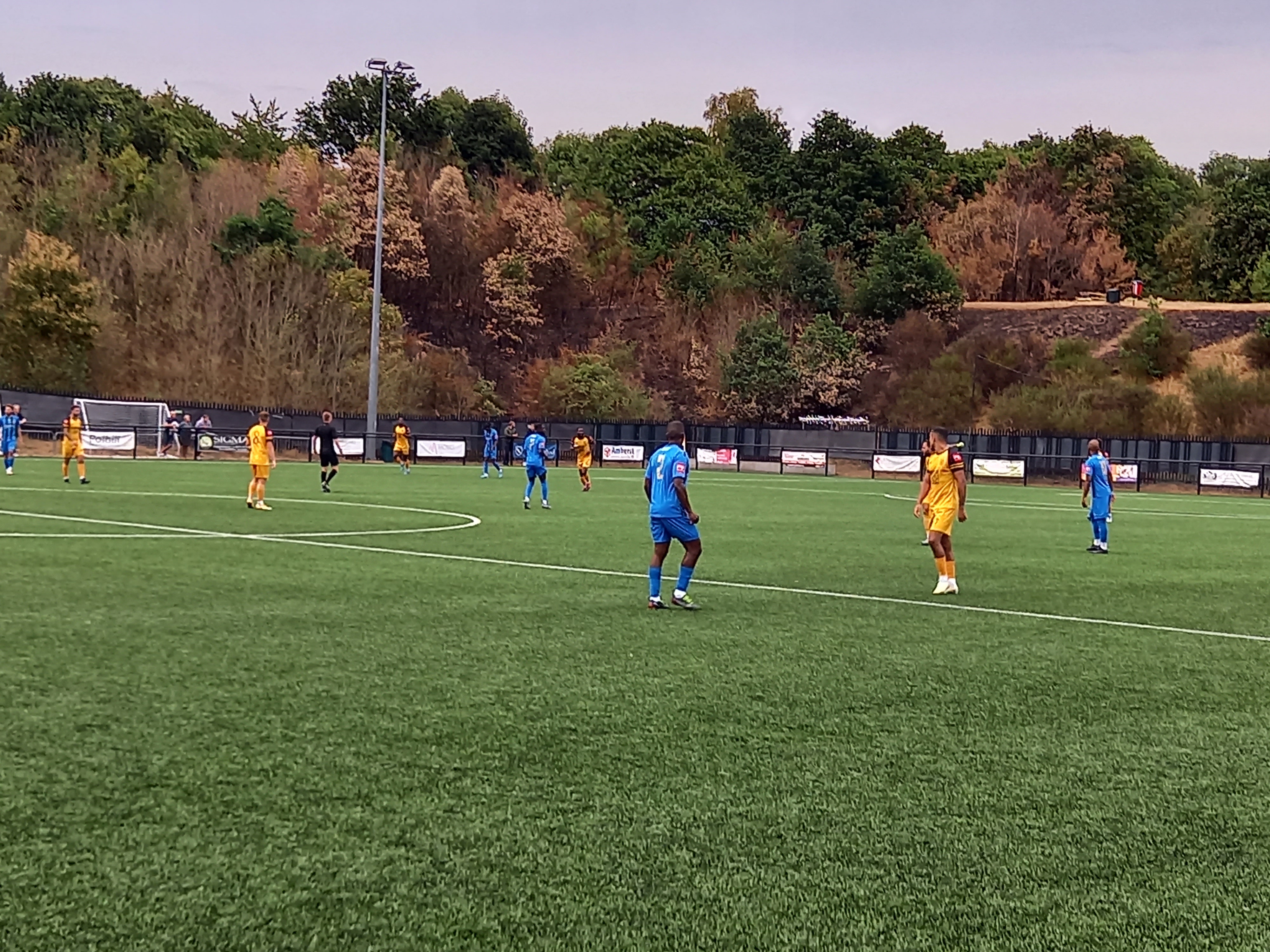 The nearest Cray came before half time to scoring was when Clunis down the right played a ball across to the near post where Tom Derry got to the ball but diverted it wide and at half time the home side led 2-0.

The second had barely settled when in the 48th minute, Sevenoaks scored a third goal when after the award of a free kick slightly to the right of the penalty area, the no 10 stepped up and thrashed home an unstoppable shot which flew into the top left corner and would have continued to travel but for the net.

Cray played a number of trialists in the second half as they looked to get a foothold in the match but found chances hard to come by.  The ever industrious Sam Wood did float a free kick out on the right into the box towards Mitch Chapman but took a nick off a defender and behind for a corner. 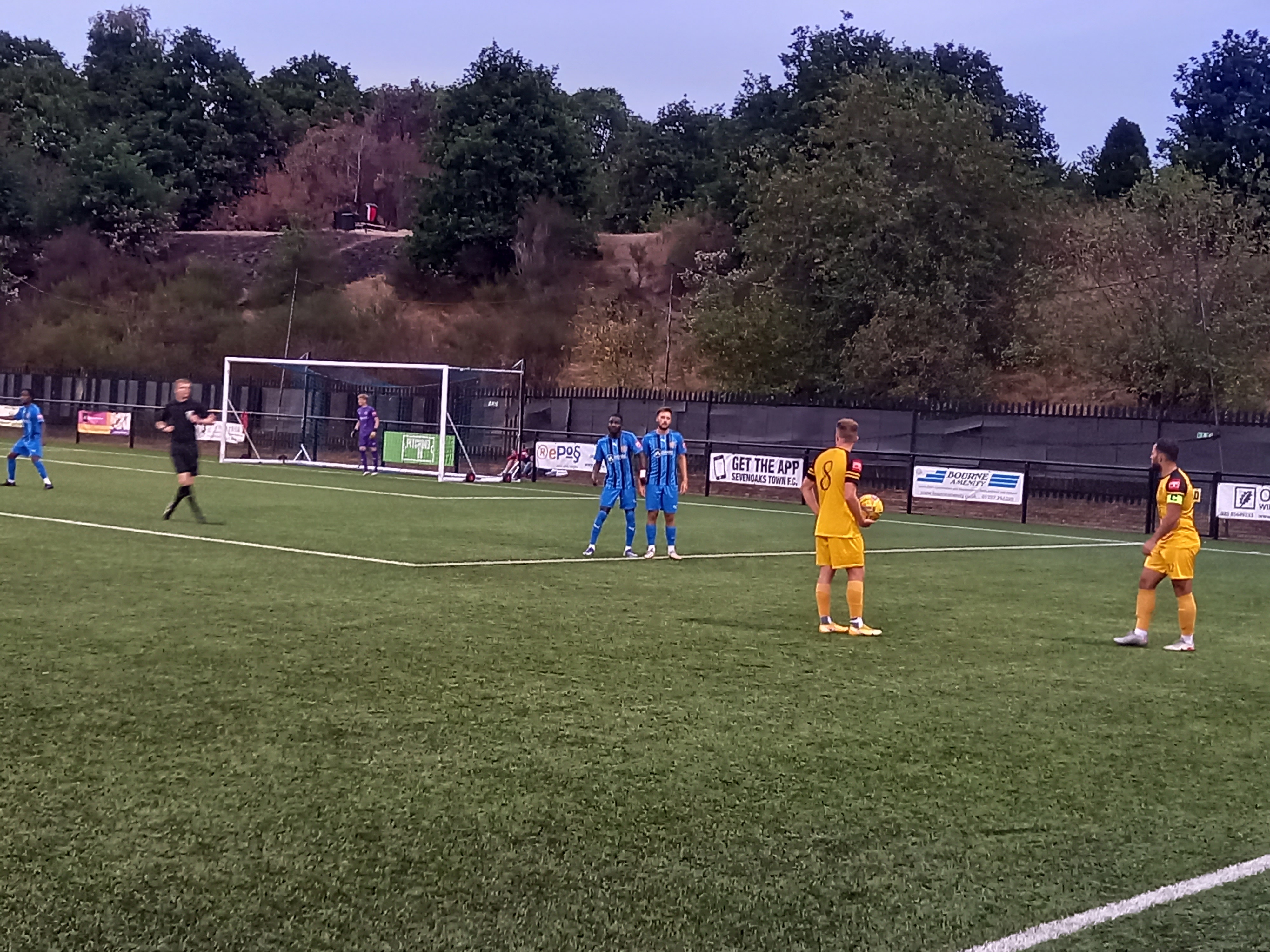 The game went through a little bit of a lull but the introduction of Freddie Parker saw Sevenoaks go back on the attack and almost immediately, Parker found space to shoot but was denied by a fine save from Rowley and was thwarted again shortly after.

Five minutes from time, Sevenoaks scored a well worked fourth goal which ended with the no 8 down the left sweeping the ball across where Parker was on hand to score from six yards out.

Cray did look to rally near the end and Clunis was unlucky not to score with a shot down the right of the area which stung the hands of the home keeper.

Two minutes from the end, the Wands pulled a goal back when the trialist no 14 fired into the bottom right corner with a shot from the edge of the box.

Cray have had better evenings but hopefully once the season starts pre-season will be long forgotten and the team will gel and have a good season.  Sevenoaks Town look like a side which has invested heavily and will surely be a contender for promotion from the Isthmian South-East this season with their brand of attacking football.

Neil Smith’s side next travel to Beckenham Town on Saturday (ko 2pm) for the penultimate pre-season game and look to finish with more of a flourish.