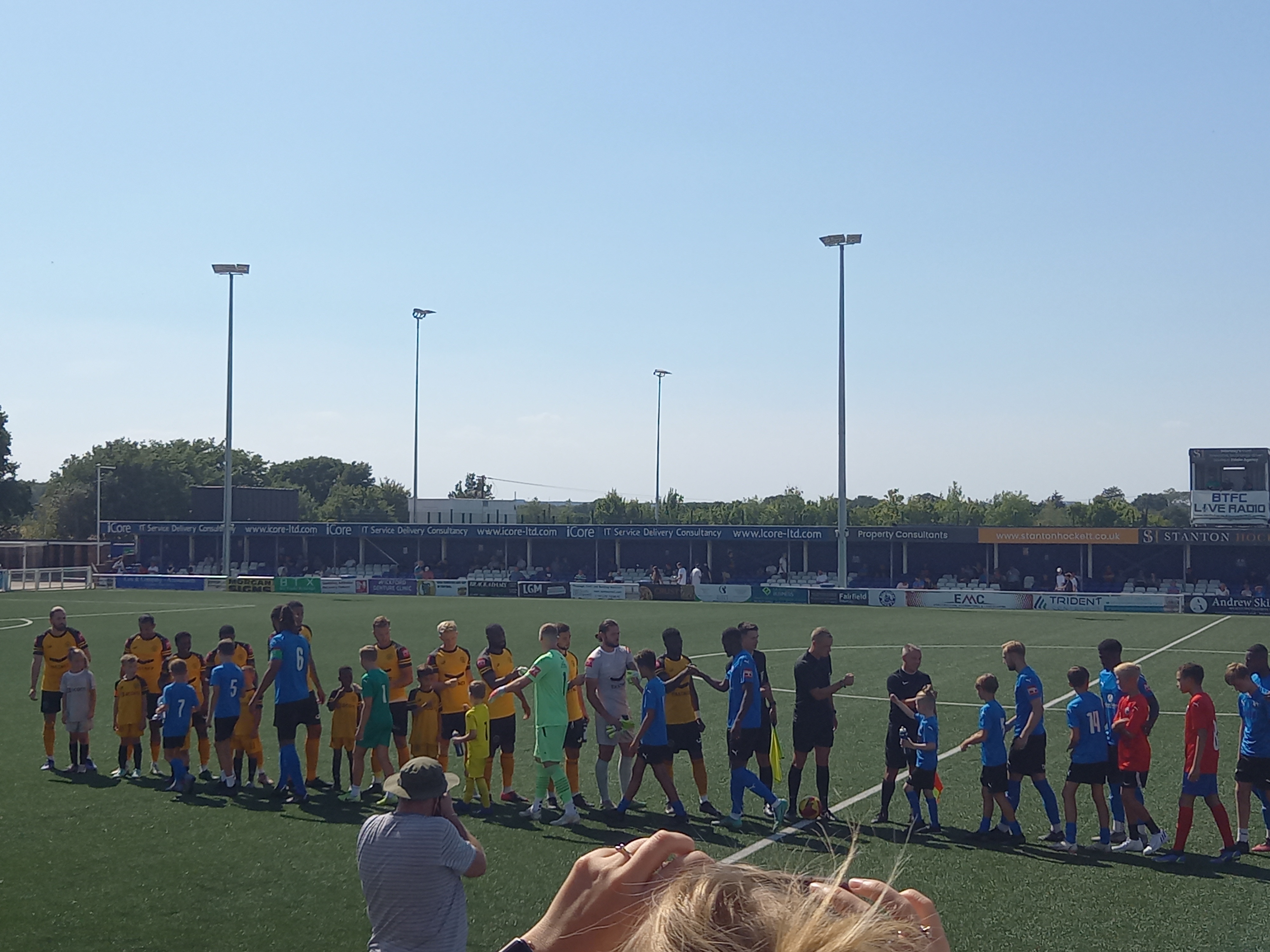 Cray Wanderers began the 2022-23 season with a trip to Billericay Town and on a very hot afternoon put in a positive performance full of endeavour but in the end were beaten by a well taken goal five minutes from time by Alfie Cerulli.

The Wands just about edged the first half and went in front in the final minute with Dan Bassett’s first goal for the club after great set up play between Tom Derry and MIchael Ademiluyi.  Cray defended stoutly for the 25 minutes after half time but were pegged back following an award of a penalty which was converted by ex-Wands Chris Dickson.  Billericay were the sharper for the remaining minutes and took the lead with a classy finish from Alfie Cerulli cutting in from the right despite Derry being down with what looked like a head injury in the centre of the field. 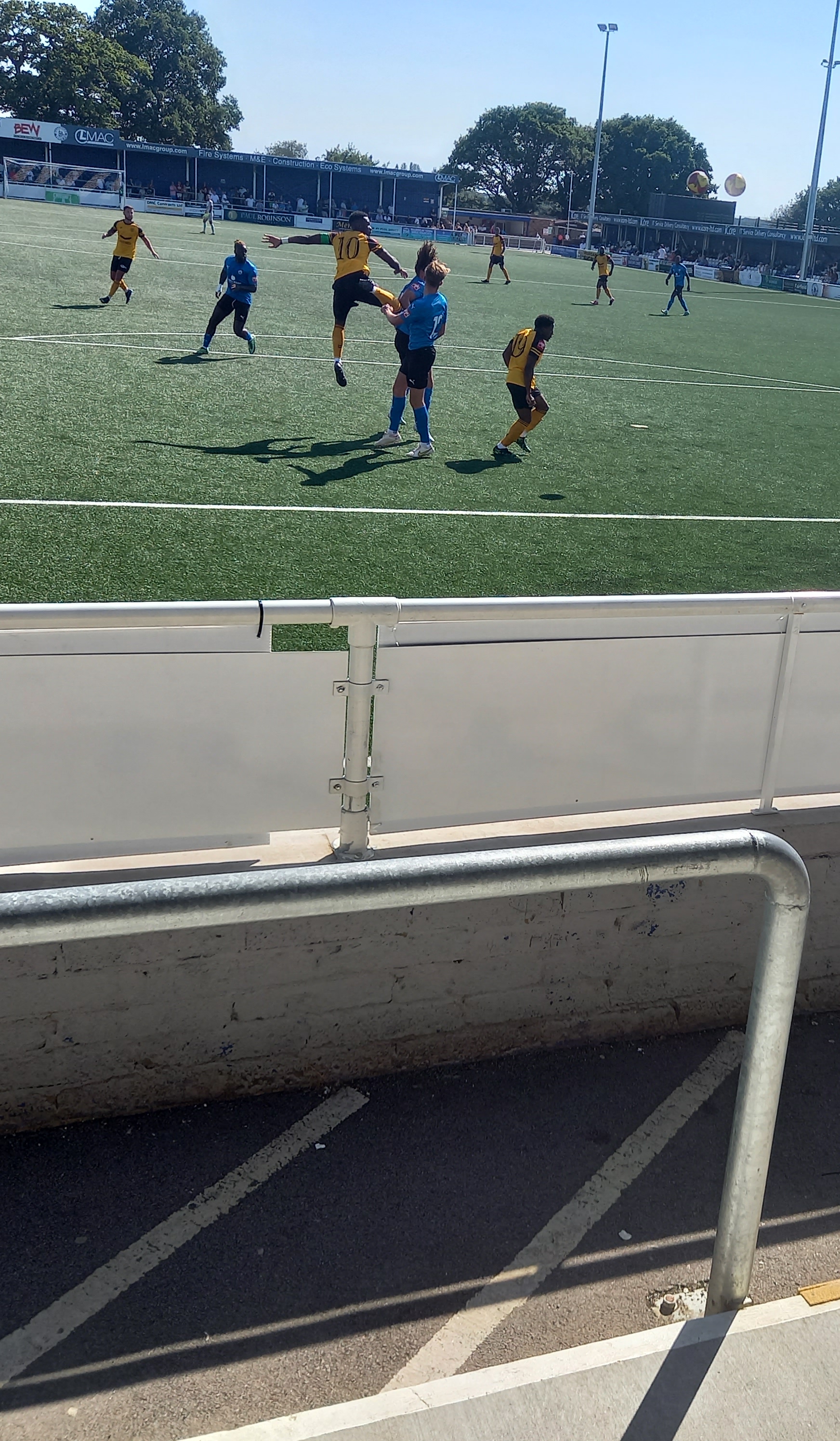 Temperatures at the New Lodge were around 33 degrees and very hot for players, managers and spectators alike on both sides and we got an intriguing contest which was played at perhaps at times understandably at a leisurely pace.

Neil Smith’s first side of the season included a number of new arrivals with Anthony Cook the only player to have started the final game of last season.  Sam Wood picked up a knock in the last pre-season game against Bromley U23s and was unavailable with the ever versatile Cook filling in as a full back for most of the game. 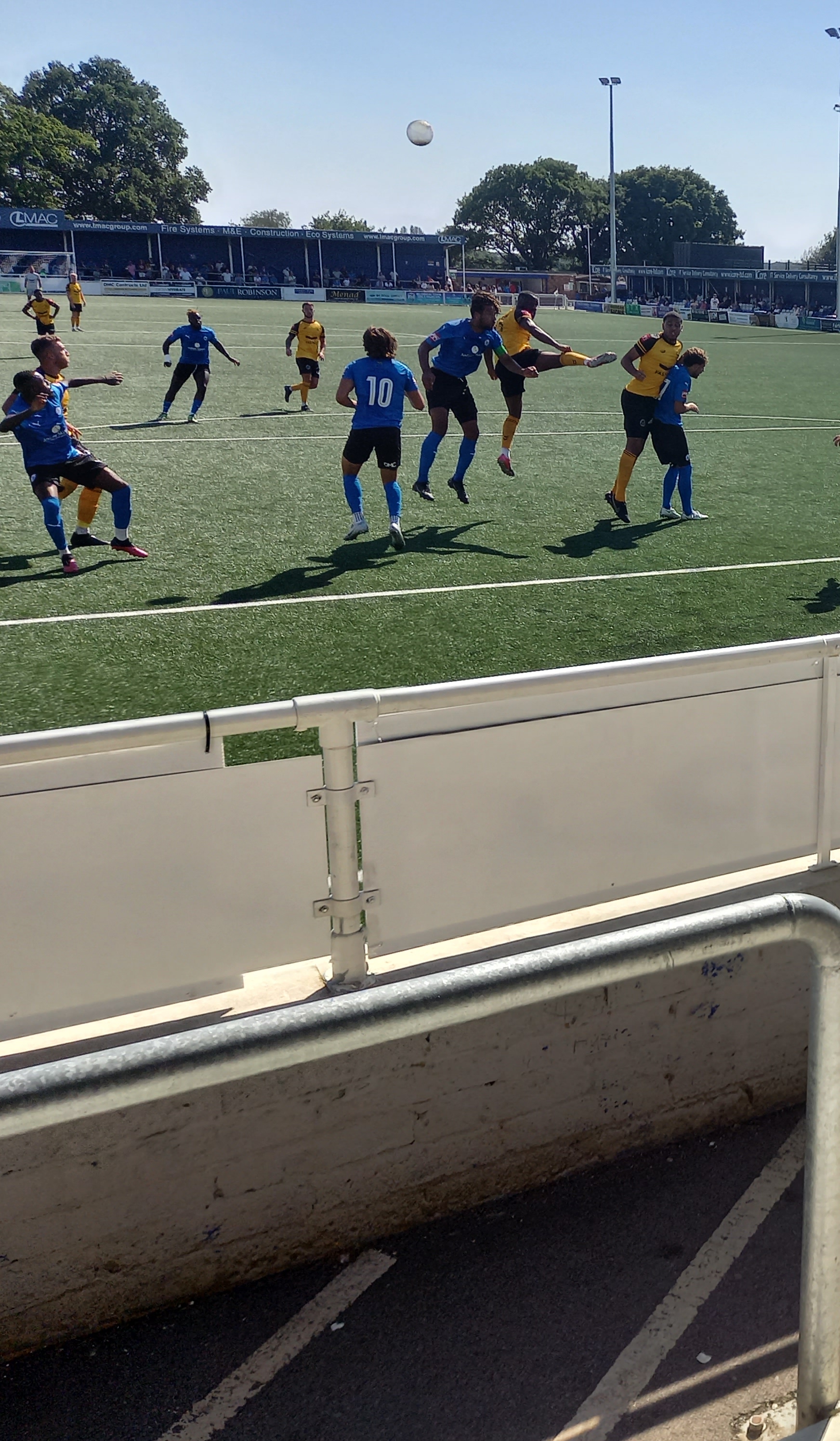 Billericay are amongst the front contenders to do well and Dan Brown’s side will be looking to bounce back up to the National South at the first time of asking and will be hard to beat at their impressive stadium and look a well drilled side.

The opening exchanges saw a fair bit of sparring or acclimatising to the heat with an overhit cross down the left from Cerulli the first real incision.  Then Ellis Sullivan found Bradley Stevenson whose shot was blocked. 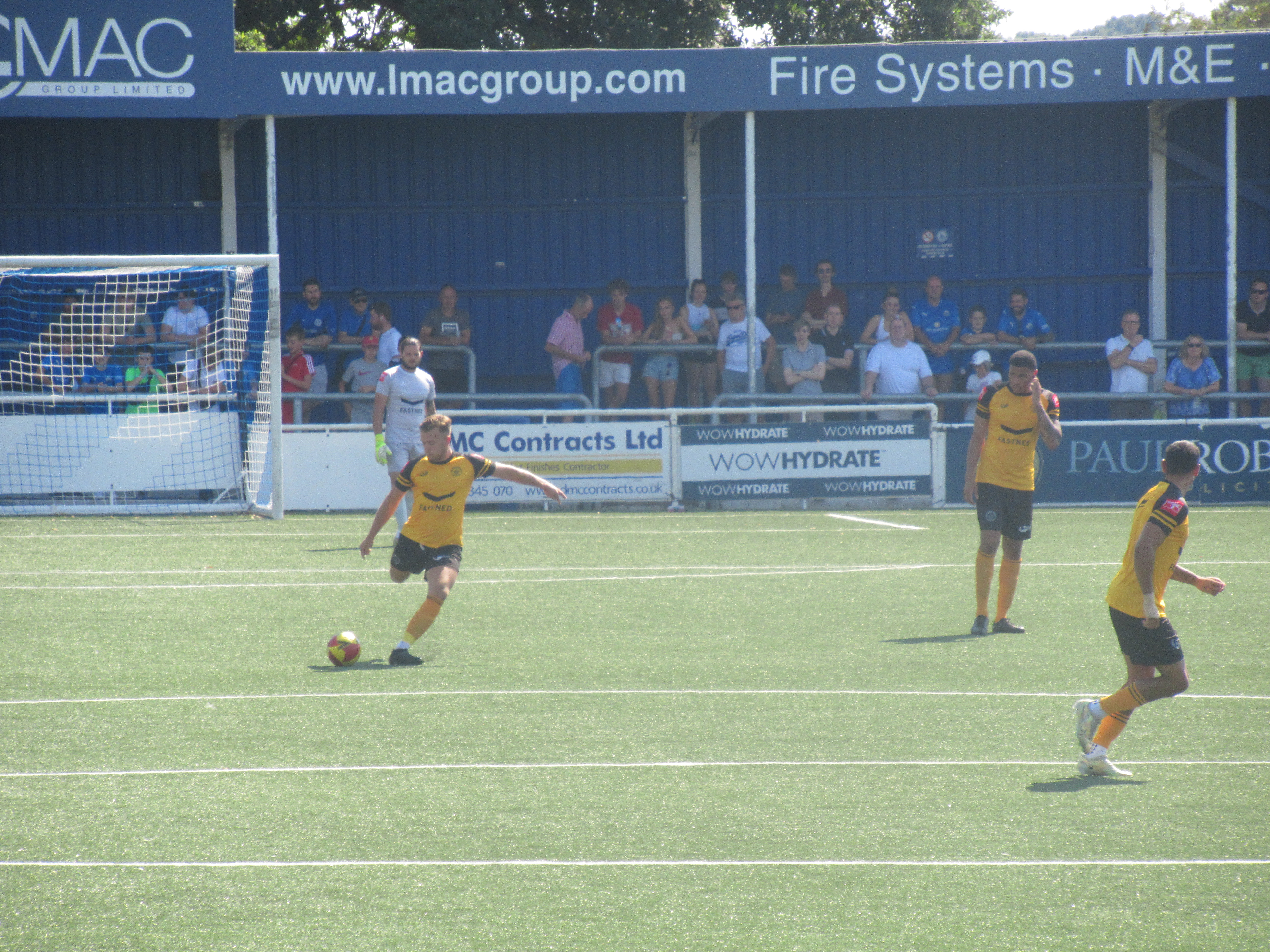 Cray though had the first real chance in the 15th minute when Joseph played a ball out to Nyren Clunis down the left and his goalbound cross-shot was pushed round the right post by Harry Seaden.

For Billericay, Cerulli who was lively throughout saw a shot blocked by Joseph for a corner and at the other end, Cook fired over the top from a free kick.

Billericay threatened again and Cerulli and Montel Agyemang fired over the bar and then down the right Anthony Jeffrey’s cross was diverted wide by Jacob Bancroft.

Ten minutes before half time Cray came close to scoring when Clunis’s cross from the left towards the far post was met by the head of Anthony Cook but was blocked and Dan Bassett couldn’t get a touch looking to follow up and the ball went wide.

With the half going into the first of three added on minutes, Cray went ahead when a ball was played towards Tom Derry who won a header to set up Michael Ademiluyi inside the area and as Seaden came to meet him, took the ball round the keeper and squared the ball to the right post when Bassett was on hand to stroke the ball into the net. 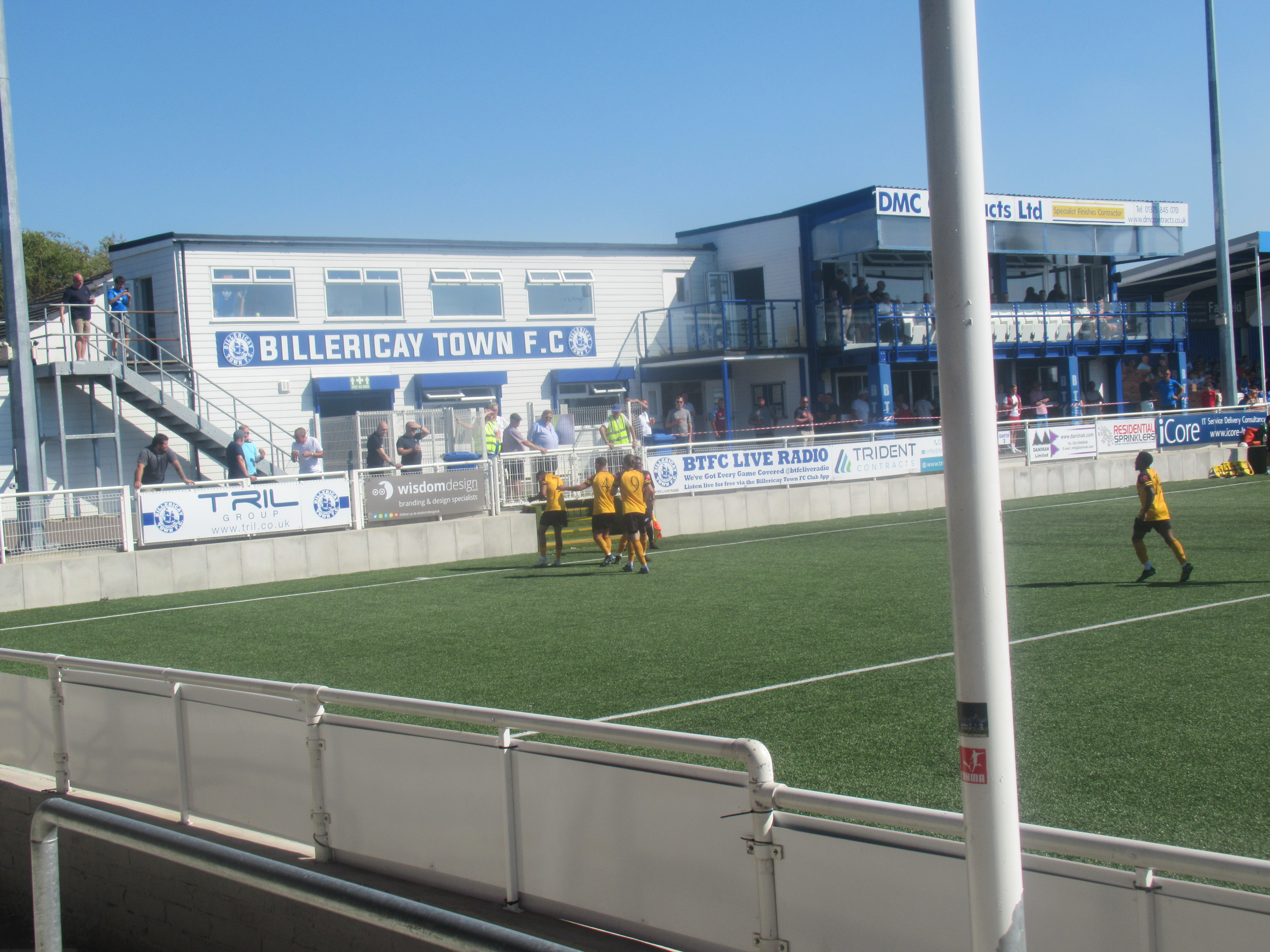 The last action of the half saw a Billericay free kick down the right from Cumberbatch towards the far post headed into the side net from Michael Chambers but at the break Cray had the advantage.

The Wands would have expected a Billericay response after half time and certainly started the second half on the front foot but Shaun Rowley was well protected and there were not too many chances for the home side.

Cray came close to scoring a second when from a corner down the right, Cook’s cross to the near post was glanced across by Mitch Chapman and Derry couldn’t get a touch to divert the ball into the net. 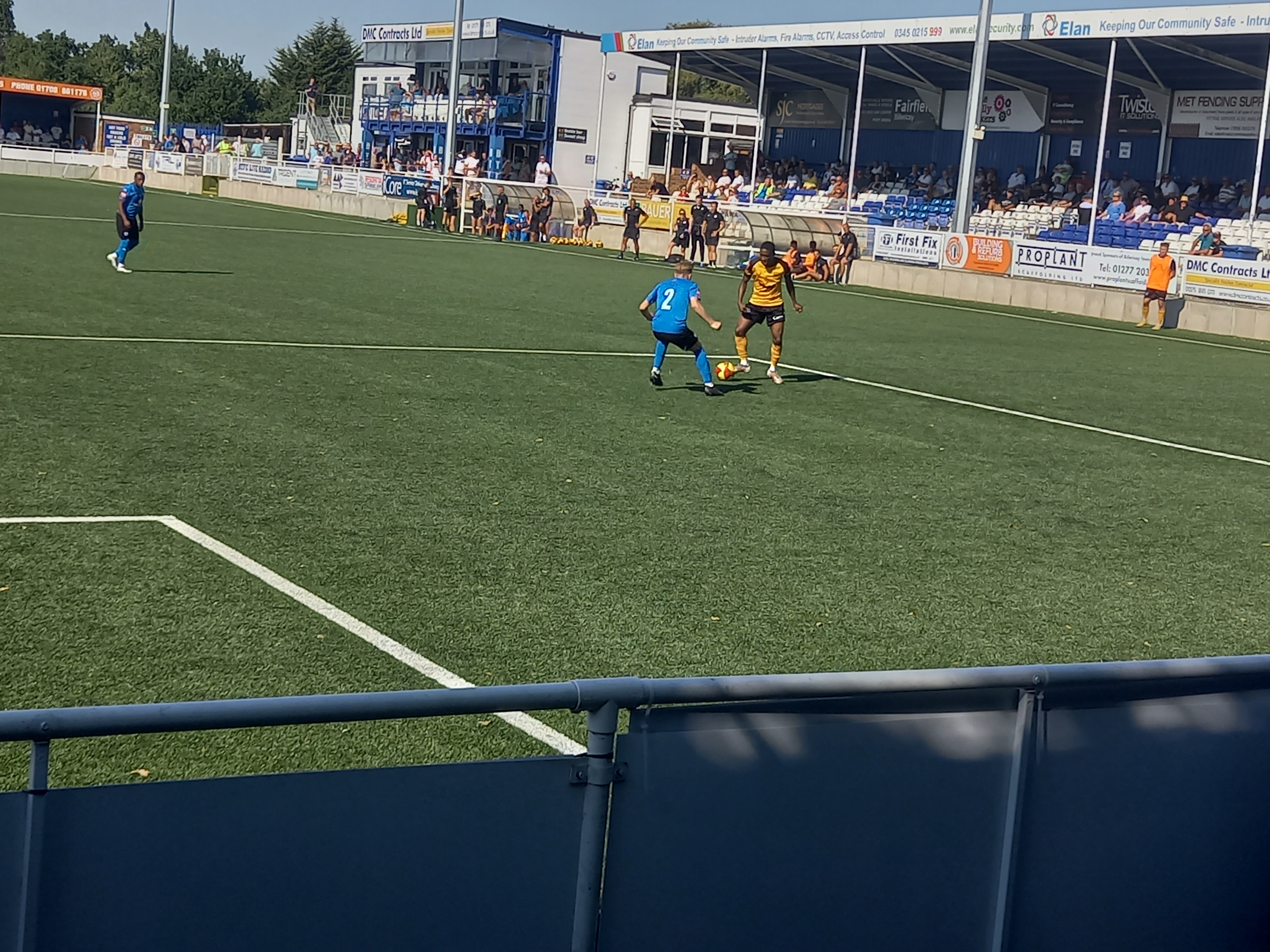 Then Bassett saw a well struck shot from the edge of the area blocked but a triple substitution for Billericay with Chris Dickson, Eze Ebuzoeme and John Ufuah all coming on after an hour and that seemed to add impetus to their efforts to get back into the game.  For Cray, Gary Lockyer who signed for the Wands in the last couple of days from Ashford United came on for Ademiluyi who put in a great shift during the afternoon. 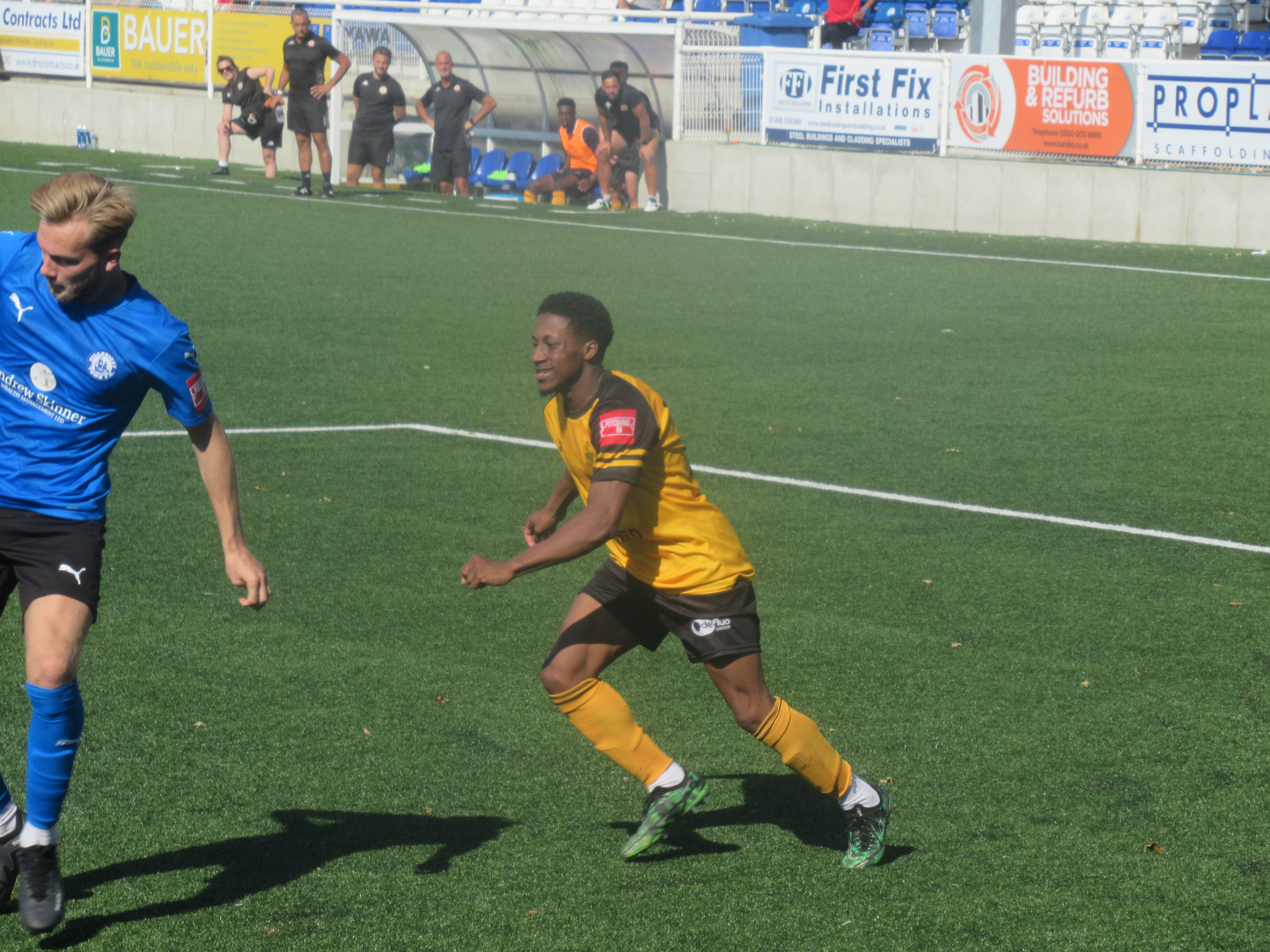 Cray were looking fairly comfortable but in the 70th minute, Billericay were awarded a penalty when Cerulli was adjudged to have been held inside the area by Joseph and from the spot Dickson fired into the bottom left although Rowley was unlucky not to get a hand to the ball.

Billericay had their tails up at this time and Cerulli curled a shot just over while Sinn’kaye Christie came on for Cray in defence with ten minutes to play.

With five minutes to go, Billericay’s pressure paid off as Cerulli down the right picked up the ball and drove a shot from just outside the area which curled past Rowley and into the net.  Cray though felt the game should have been stopped as Derry went down with a head injury in midfield after a collision with Chapman but play was allowed to go on.  It was a classy finish but there was a sense of injustice amongst the Cray faithful.

There wasn’t really much time for Cray to respond but despite a very strong effort in trying conditions just came up short on the day but there were real reasons for optimism for the season if the work ethic, quality and desire are replicated. 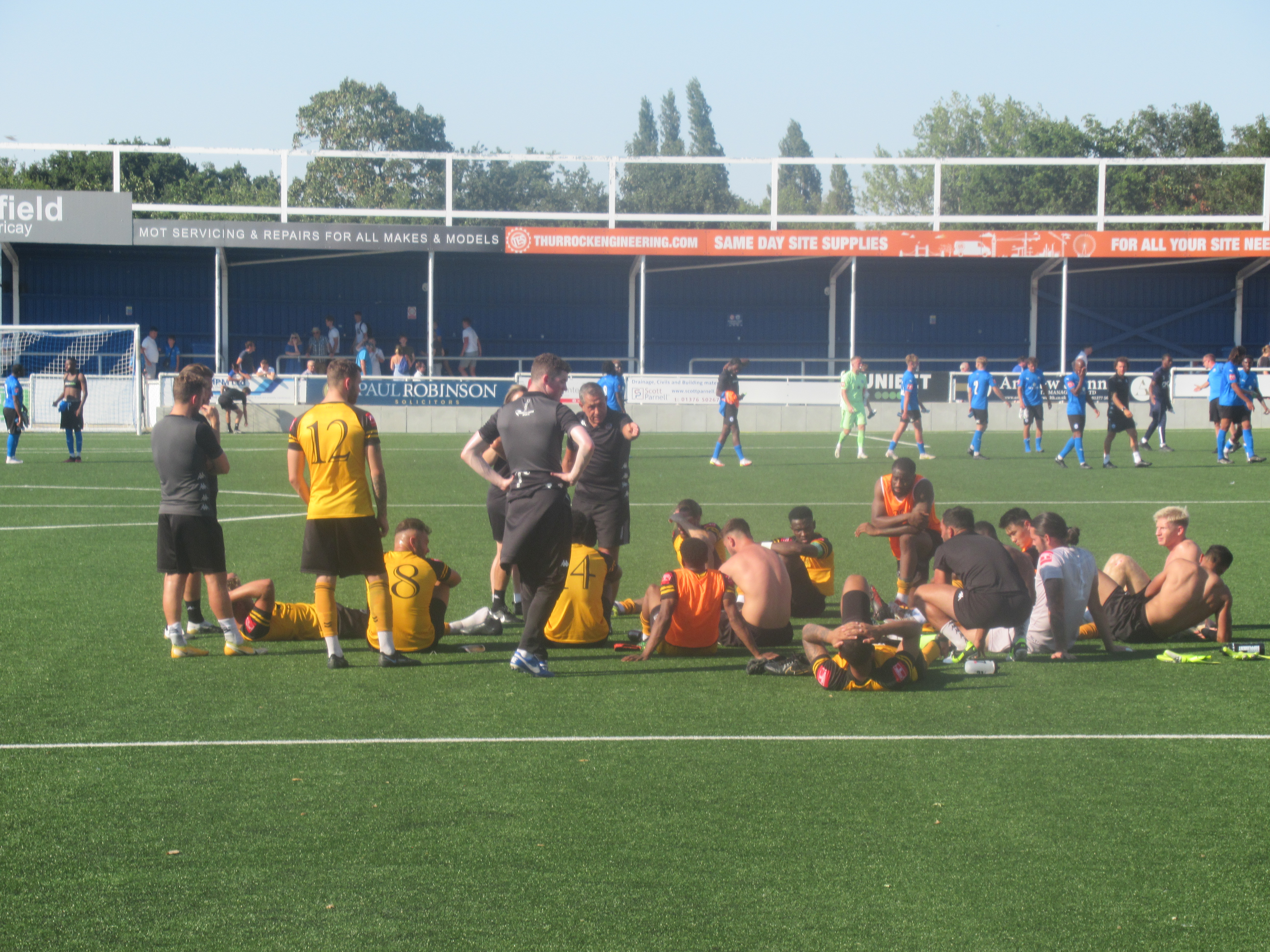 There is not much time to dwell too much on the game as matches come thick and fast and Cray will next be at home to Bognor Regis Town on Wednesday 17th August, 7.45 pm.