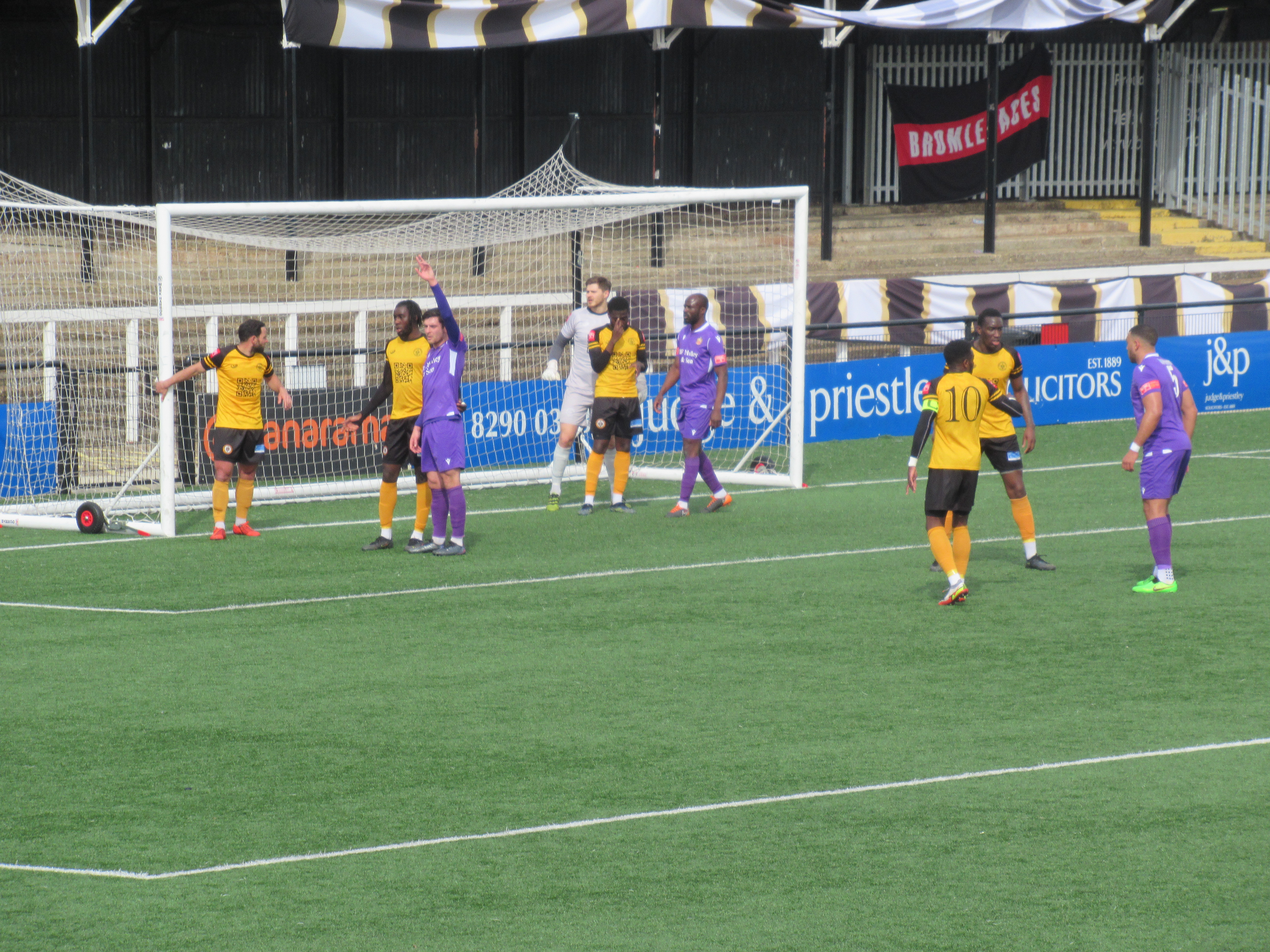 Cray Wanderers went down to their fourth straight defeat on a bright afternoon at Hayes Lane as Hornchurch moved up to 3rd with a strong finish to the game and kept Cray in 21st place in the table with three games to play.

This always looked to be a tough game against a Hornchurch side in good form while Cray had just one in the last ten league games but in the first 70 minutes the Wands created chances but the main difference was that Hornchurch took those that came their way and in the end scored three in the last five minutes to seal the Wands heaviest defeat of the season.

After Cray edged the opening exchanges Hornchurch took the lead with their first real sortie towards the Wands goal in the 14th minute when Liam Nash’s right wing cross was turned in from close range by Ola Ogunwimide.  Hornchurch could have added to their tally first half but Cray came out in the early stages of the second half re-charged and Chris Dickson, Anthony Cook, Sam Wood all came close to levelling before Nash made it 2-0 on the counter attack in the 66th minute.  In the last five minutes, Hornchurch turned up the power and substitute Ellis Brown made it 3-0 and another substitute Charlie Ruff made it four in the 88th minute. In stoppage time, Tobi Joseph scored with a shot on the turn to complete the scoring. 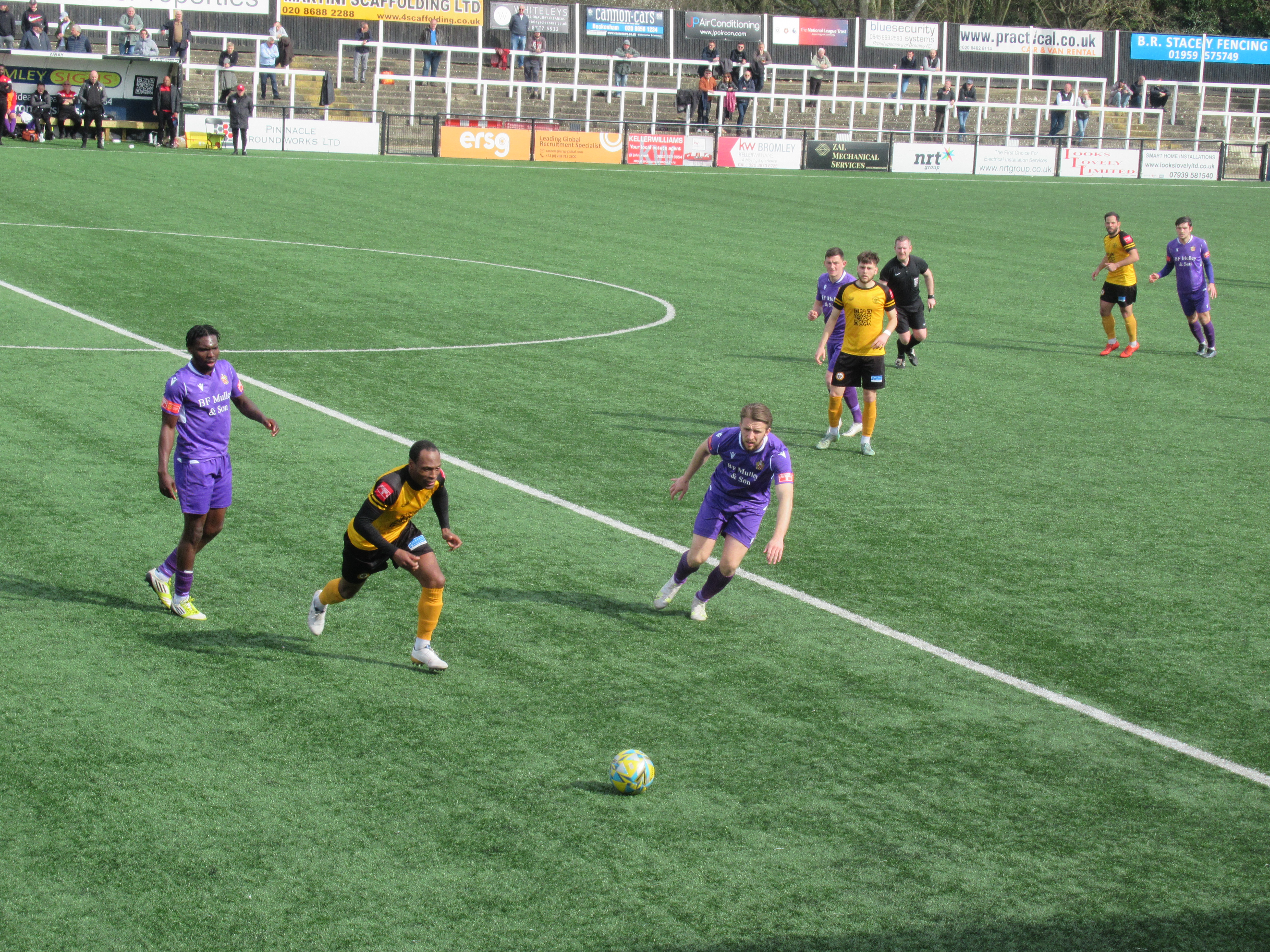 After Saturday’s results Cray needed at least a point to move out of the bottom two and from the side which lost at Leatherhead into the team came Kasim Aidoo in place of Luca Albon.  Hornchurch had lost just twice since November in the league and both m Enfield Town and on Tuesday beat fellow playoff contenders Cheshunt and there was one change to Mark Stimson’s lineup with Ollie Muldoon coming in for Lewwis Spence.

Cray began the game on the front foot and down the left Jamie Yila was unlucky to see his cross loop away from goal and over and won a couple of early corners.

The Wands had the first real shooting chance in the 13th minute when down the right Kyel Reid set up Chris Dickson for a near post shot from the edge of the area which was held by Joe Wright.

A minute later though Hornchurch with their first incisive attack went ahead with a well worked goal as down the right Liam Nash from close to the byline played the ball into the six yard box where Ogun Ogunwamide steered the ball past Max Huxter and into the bottom right corner.

Cray almost levelled a couple of minutes later when Dickson was played through down the right, took the ball round Wright and squared the ball to Reid who shot over the top.

Hornchurch though began to dominate from here and a free kick was played into the area and Dickson had to volley over his own crossbar for a corner.  From the corner the ball came out to Tom Wraight who lashed a shot over the top.  Then Wraight found Ogunwamide down the left and his ball across was stabbed wide by Tobi Joseph.  Then Joseph headed over a Remi Sutton cross. 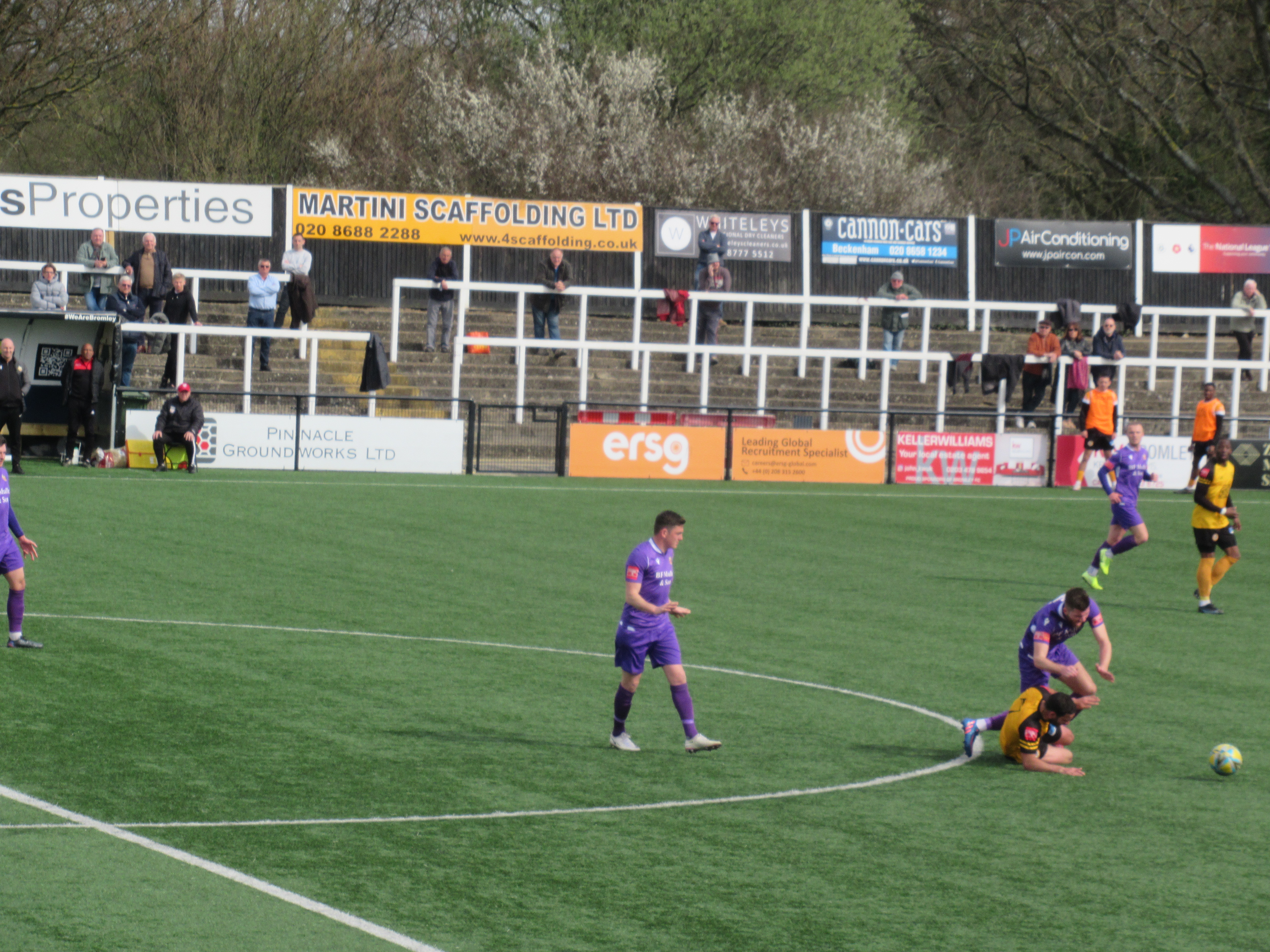 Cray had to make a change in the 36th minute with Richie Danquah coming on for Denzel Williams.  The Urchins had the ball in the net through Nash but was disallowed for offside and then a corner from Wraight was flicked just wide of the right post by Joseph.

Just before half time Cray came close when Anthony Cook was found by Jedd Smith and his curling shot was deflected over for a corner but half time probably came at the right time for Cray to regroup.

Cray came out a different side immediately after the break with Yila to the fore and he played a fine ball through to Dickson who down the left of the area, took the ball past Wright but his goal bound effort was cleared off the line by Mickey Parcell.

Then Cook was unlucky with a fine shot from 25 yards which Wright did well to push away and behind for a corner.  Then a cross from Yila was glanced wide of the right post by Dickson.

Cray were knocking on the door and Sam Wood down the left cut inside and his shot was turned round the left post by Wright.  From the corner the ball came to Wood who volleyed over.

Then Cook who was unfortunate not to score in the score hit another curler which flew fractionally past the right post. This was followed by Yila’s cross towards the far post was helped across by Reid and Dickson’s overhead kick inside the area was blocked. 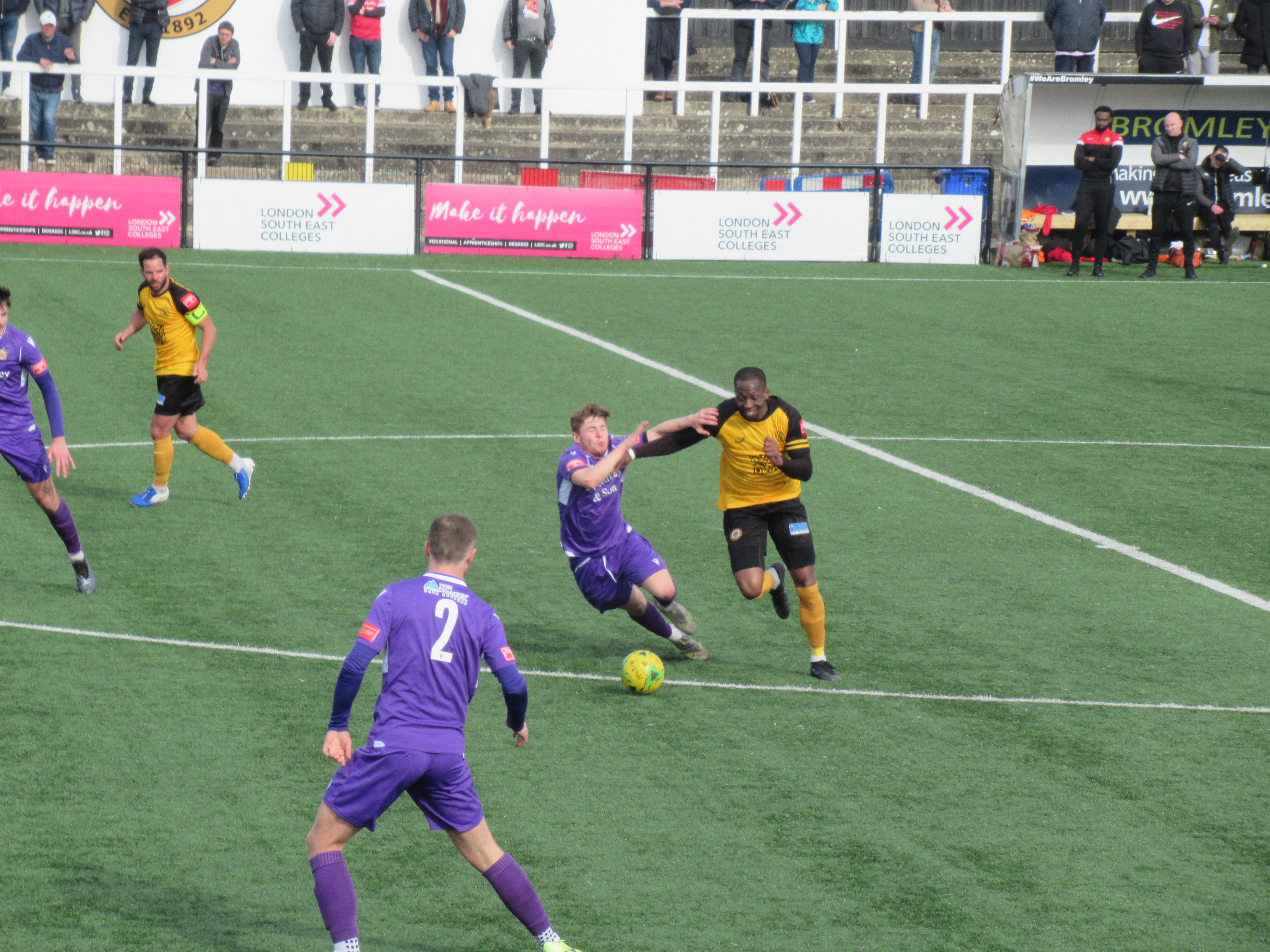 Another Yila cross was flicked over by Wright and from the corner the ball came to Dickson whose header was deflected over by Jordan Clark.  Wood volleyed over from a Reid corner and then Cook once again fired just wide of the right post.

The feeling was that Cray really need to take one of those chances but in the 66th minute, Hornchurch scored a second on the breakaway when the very lively Ogunwimide received the ball down the right and broke forward and played an accurate pass through to Liam Nash who fired across Huxter and into the bottom left to make it 2-0.

Hornchurch came close when Sutton fired just wide from a shot down the left of the area while Cray had the ball in the net in the 76th minute through Richie Danquah but the goal was disallowed for offside.

Two young players were brought on for the later stages, Saul Kader and Harvey Browne while Hornchurch brought on some solid experience with Ronnie Winn, Charlie Ruff and Ellis Brown coming on and while Cray were working hard, Hornchurch had quelled that earlier onslaught from the Wands. 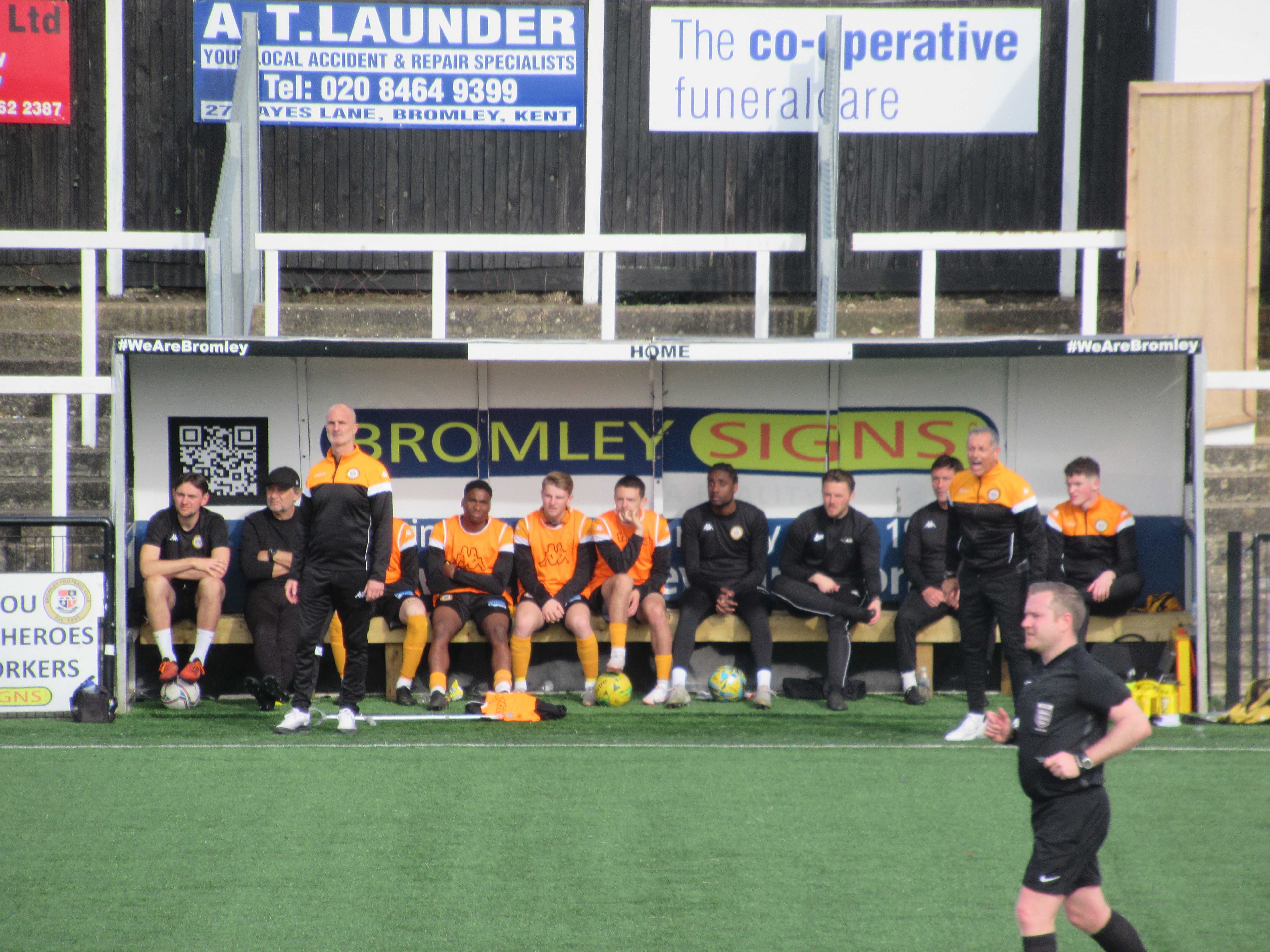 With five minutes to go the game was as good as over as down the left, Winn got to the byline and played the ball across where Brown scored just five minutes after coming on to make it 3-0.

The Wands were starting to get rather over-run towards the end and in the 88th minute Hornchurch scored a fourth when Brown was provider with a strong run down the right and his cross was missed by Joseph in the six yard box but at the far post Ruff jabbed the ball in from a couple of yards out.

At this stage the Wands would have settled for the final whistle but in the second of three added on minutes, Hornchurch made it a nap hand with a fifth goal which was possibly the pick of the bunch as Sutton found Joseph with his back to goal who turned just inside the area and hooked home a fine shot to make it 5-0 and complete the scoring.

Cray did have a strong start to the second half and deserved something out of that phase of the game but the difference between the sides at the top and bottom was starkly shown by the finishing and perhaps things not going for you when you are down the bottom while Hornchurch were very clinical with their finishing. Hornchurch look well set to have a decent crack at the playoffs and it will take a good side to beat them.

Neil Smith’s side gave it their all but must now re-focus for another tough assignment at Enfield Town on Good Friday (15th April) who were shocked by Brightlingsea Regent on Saturday. East Thurrock United are the final visitors of the season to Hayes Lane for Cray on 20th April and that looks very much like being decisive in Cray preserving their Isthmian Premier status for next season.