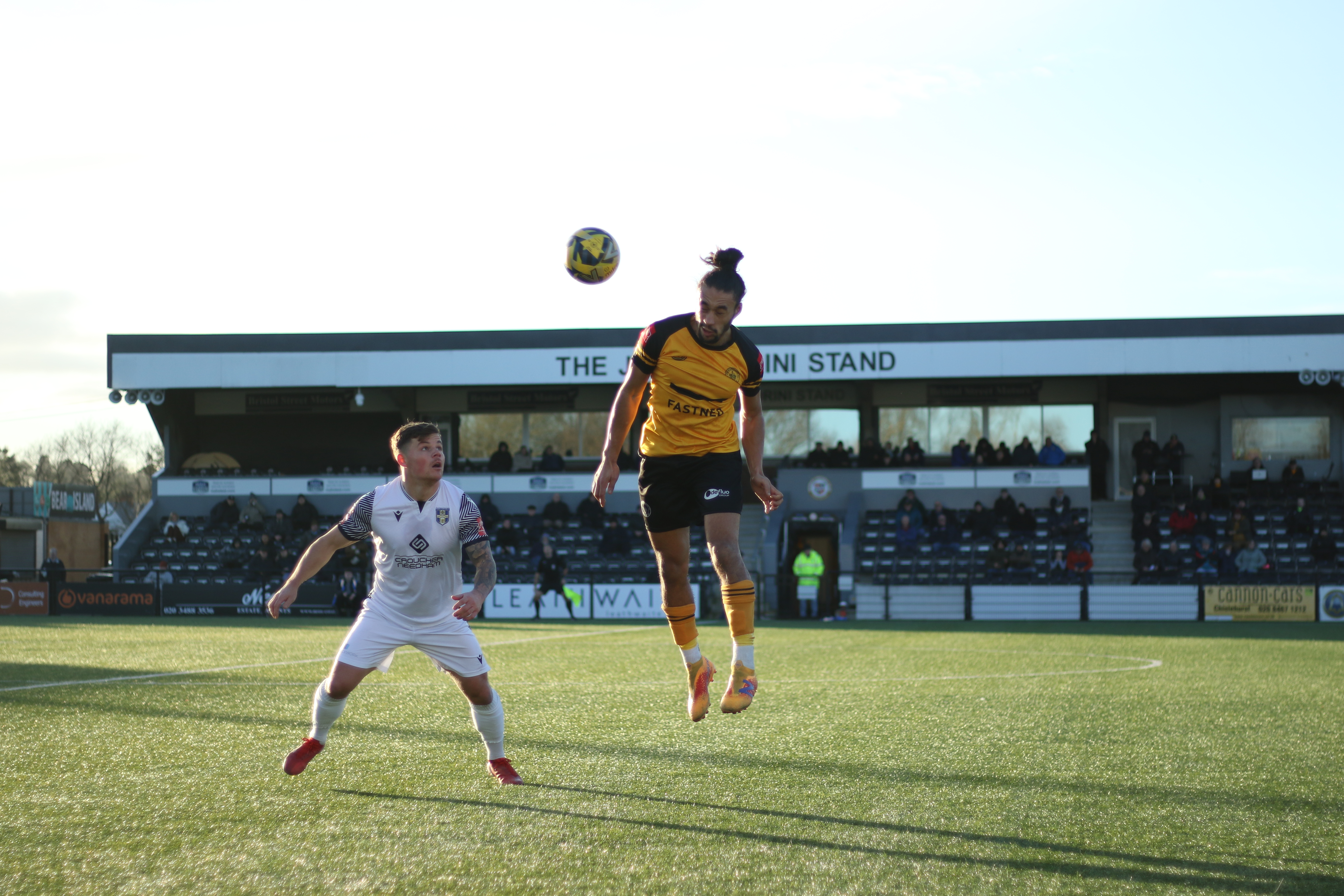 Cray Wanderers nine game unbeaten run came to an end but only after a dramatic second half as Bishop’s Stortford claimed the three points to move up to 2nd in the Isthmian Premier League table.

Bishop’s Stortford had the edge in a tight first half and led through Darren Foxley’s close range strike four minutes before the break.  Cray though were much improved in the second half and turned the game on its head with goals from Yahaya Bamba from the penalty spot and a debut goal for new signing Dajon Golding by the 68th minute.

The Blues though were always a threat from set pieces and scored twice in ninety seconds through a close range Brandon Adams goal and then in the 78th minute were back in front courtesy of top scorer Frankie Merrifield.  Cray were unable to come back one more time and in the end just came up short and moved down one place to 3rd in the table but just three points behind leaders Hornchurch.

Cray were looking to continue the unbeaten run since 19th November and from the side which drew at Canvey Island last Saturday there were two changes with Mitch Chapman and new signing Dajon Golding who won the Isthmian Premier with Worthing last season coming in for Sam Skeffington and Anthony Cook.  With Jephte Tanga injured and Harrison Sodje recalled by Leyton Orient, Freddie Carter made his first start as full back since 5th November. 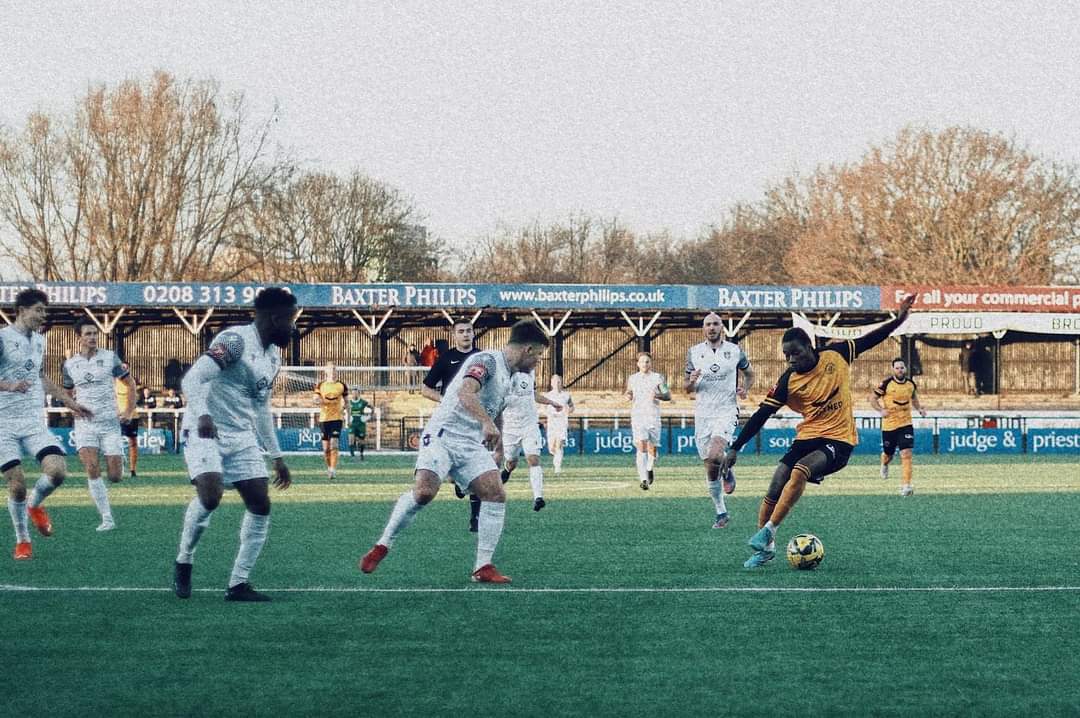 Bishop’s Stortford had slipped to 6th in the table after Saturday’s results and had lost their last two games and from the side which were beaten by Lewes last weekend there were two changes to the starting lineup with Darren Foxley and Anthony Church coming in for Frankie Merrifield and Donell Thomas.

On a bright, dry and fresh afternoon, the match saw some early sparring with perhaps Bishop’s Stortford edging the first ten minutes and won an early corner and Ryan Charles cross went across the box.

The first real opening came in the 13th minute when from one of many dangerous throw in’s down the right, Matthew Johnson’s throw wasn’t sufficiently cleared by Cray and came to Harry Beadle whose shot was deflected over the crossbar for a corner off Freddie Carter.  Darren Foxley’s left wing corner towards the far post was well claimed under pressure by Shaun Rowley.

At the other end, Cray were looking to pose a threat and Golding from 20 yards fired wide of the right post.

Another Johnson throw in towards the area saw a hooked effort from Oliver Peters go wide of goal before the game became something of a war of attrition with Cray having more possession but not so much of a goal threat.

Just after the half hour Bishop’s Stortford had the first effort on target when a ball sent over from the right was met by a firm header from Ryan Charles but Rowley made a comfortable save by the left post.

Cray were forced into a change in the 36th minute when Carter had to go off through concussion protocols and was replaced by Sinn’kaye Christie.

The match just seemed to be drifting towards half time when in the 41st minute from a Johnson throw in down the right, Cray had trouble clearing their lines and the ball fell to Foxley who made no mistake from about seven yards out and his first league goal of the season.

Before the break Dan Bassett hooked an effort wide of goal after keeper Jack Giddens came to clear the ball away but Cray hadn’t made much of an impression on the visitors goal in the first half.

Cray had to make a second change at half time with Sam Skeffington replacing David Ijaha and Bishop’s Stortford almost scored a second straight away when from a throw in from the left led to a goalmouth scramble and came to Charles but couldn’t direct an effort on goal and went behind.  Then Peters set up Chris Harris whose shot from distance was deflected through to Rowley.

Cray though were started to impose themselves more on the proceedings and good work by Skeffington saw the ball come to Yahaya Bamba down the right and his ball across eventually came to Dan Bassett and his shot was blocked well by two defenders and behind for a corner.  From the corner the ball came to Bassett and his ball towards the near post rattled the post and behind for a goal kick. 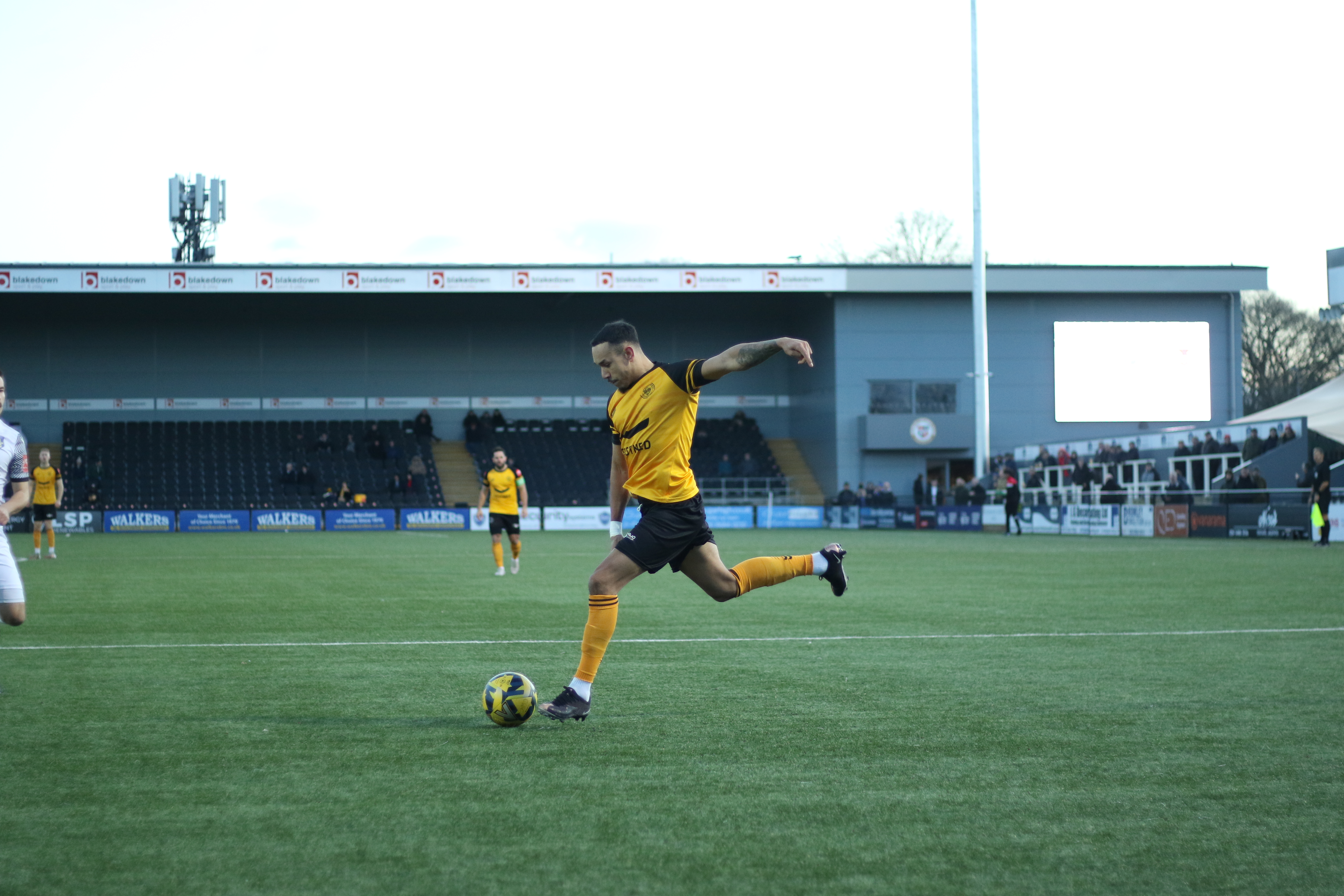 Just after the hour Cray were given the chance to draw level when Tom Derry’s pass found Bamba down the right who broke into the area and looked to have been brought down by Jay Porter as signalled by the linesman and a penalty was given. From the spot Bamba scored for the second successive game with a coolly taken kick.

From here Cray had momentum and turned the game on its head in the 68th minute with a moment of quality when Bassett played a fine ball through to Golding who held off a defender and from the left of the area lashed a shot high into the top right hand corner of the net for a great way to get off the mark on his Wands debut. 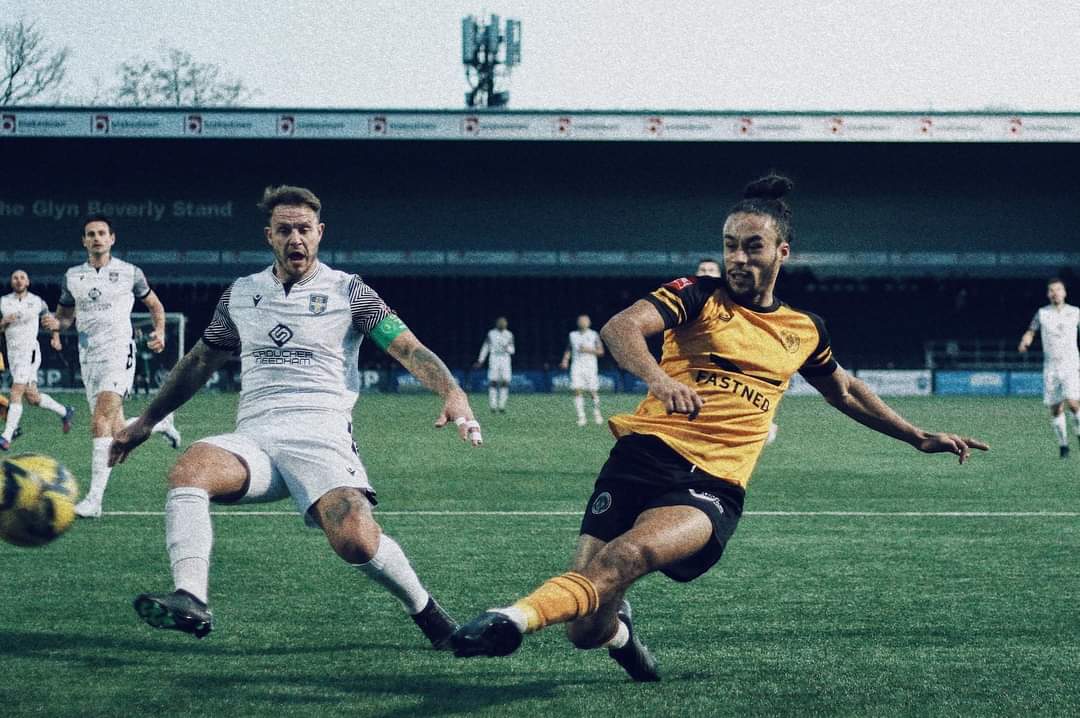 The game then became a touch tetchy for a spell which allowed Bishop’s Stortford to get back into the game.  They came close to scoring when substitute Frankie Merrifield saw a shot pushed out by Rowley and a follow up shot from Peters was blocked by Sam Wood.

In the 76th minute from a free kick out on the left, Foxley’s ball into the area wasn’t sufficiently cleared and a cross from Ryan Henshaw was turned in from inside the six yard box by substitute Brandon Adams who had been on the pitch for just three minutes.

Within ninety seconds Cray fell behind once again from a throw-in from the right and after Peters first effort was blocked by Rowley, the return ball found Merrifield who found space to smash the ball into the net for his 13th goal of the season.

From a corner, Beadle hooked wide for Bishop’s Stortford but Cray kept battling but just couldn’t find a way back into the game.  The Wands came closest in stoppage time when Bassett hit a shot on the half volley over the bar but just came up short on the day. 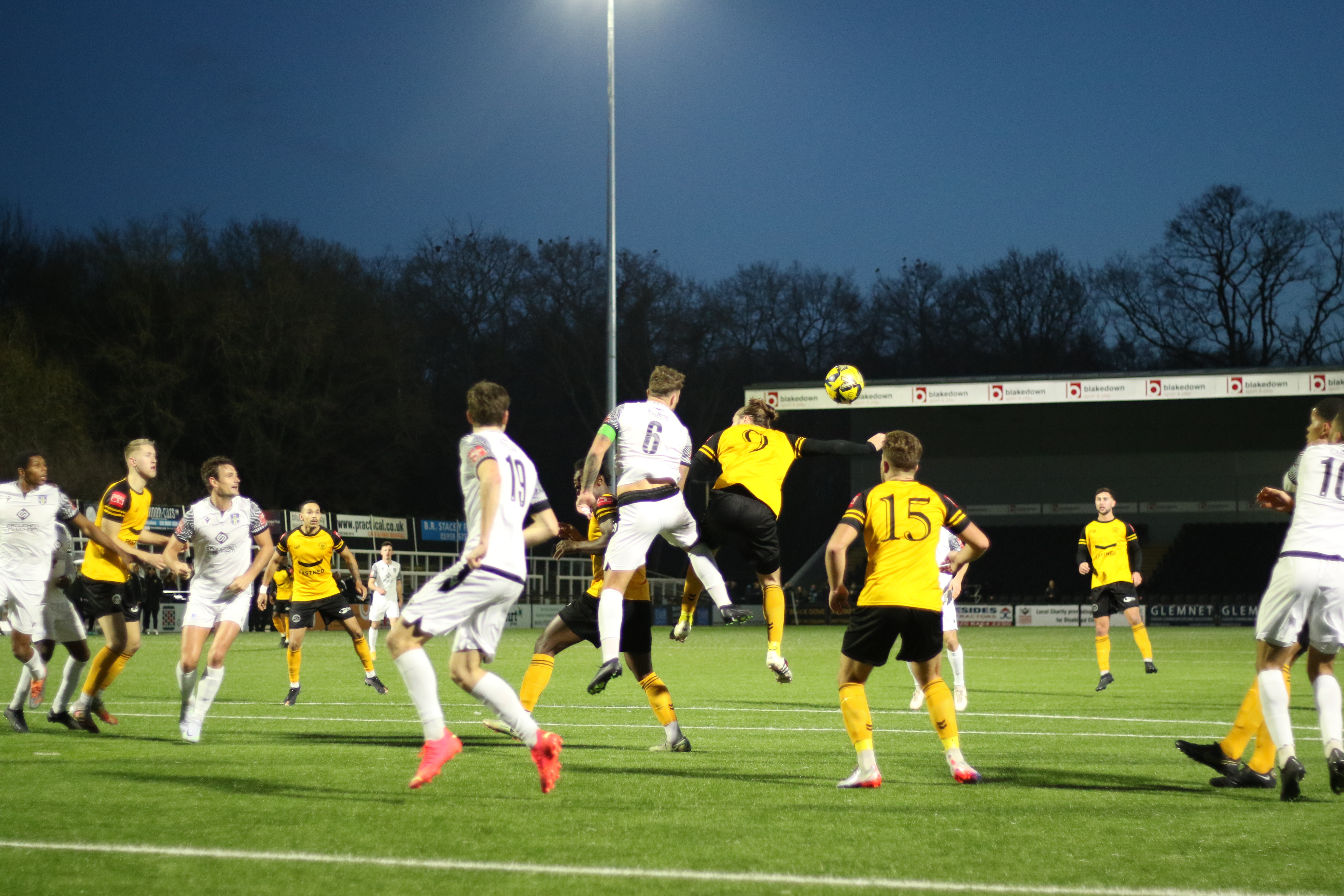 There was concern at the final whistle when Bassett went down with what looked like a foot or leg injury and had to be stretchered off and was in great pain. We all hope Danny makes a speedy recovery and was a worrying way to end a game which was never a classic but was chock full of commitment and a bit of a battle at times and both teams showed their powers of recovery during the second half.

Cray now look to bounce back and travel to 5th placed Aveley on Saturday and will be another game which will require character and resolve but will be another exciting challenge for Neil Smith’s vibrant side.