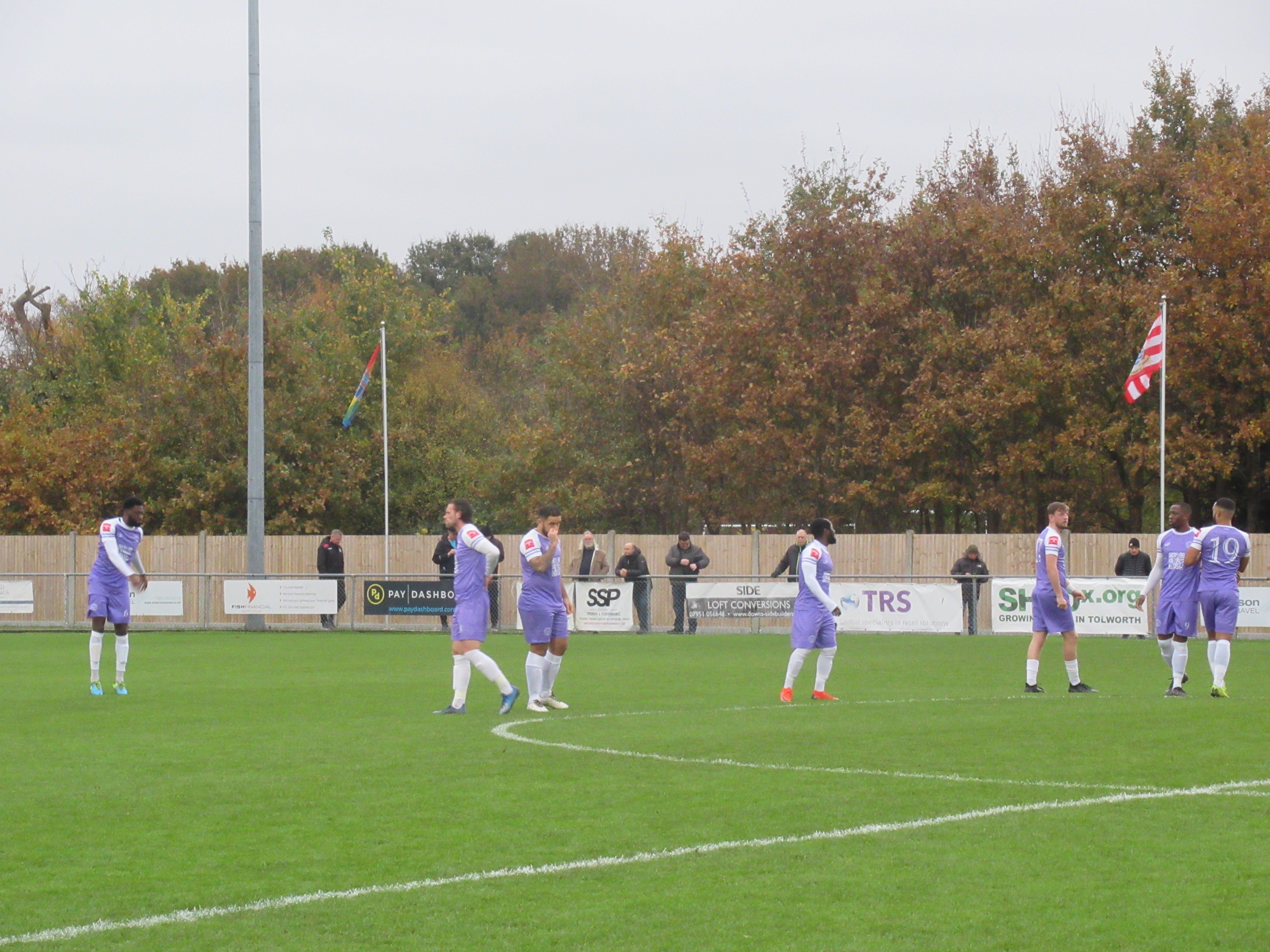 Before that it was a tale of a penalty apiece as Gus Sow scored his 12th goal of the season from spot in the 22nd minute after Daniel Ajakaiye had been tripped in the area.  Cray though had done enough to be level by that stage and ten minutes into the second half drew level when Anthony Cook was brought down by a combination of Simon Cooper and Rob Tolfrey and Cook scored to make it 1-1 before Buchanan bursting run and terrific lobbed finish in the 73rd minute claimed the points.

Danny Kedwell’s side had played well in their last game at home to Bedfont Sports and from the side which started  that match there was one change to the starting lineup with Anthony Cook coming in for Jack Hanson. Kingstonian who were 6th going into the match and who won their opening five matches of the season and were unbeaten in five after beating Banstead Athletic 4-2 in the Surrey Senior Cup in midweek where Buchanan scored all four goals.

Kingstonian are a strong side and looked to attack from the off and Gus Sow fired over the bar in the first minute of the match.  Then Hayden’s Bird’s team came close in the 7th minute when Sow and ex-Wand Jason Banton combined to set up Daniel Ajakaiye whose shot was well blocked by Jack Turner and a shot from another ex-Cray player Rhys Murrell-Williamson was safely gathered by Turner.

A couple of minutes later, Cray looked to go ahead and Chris Dickson found Anthony Cook down the right of the area but fired just over the angle of post and bar. 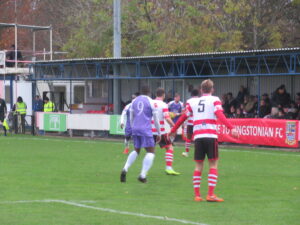 In the 13th minute, the Wands were unlucky when Adam Coombes down the right put over a cross towards the far post and Dickson’s acrobatic overhead kick when wide of the right post.

The game was going from end to end but it looked like two good defences which would be hard to breach. However, in the 22nd minute Kingstonian were awarded a penalty when Nyren Clunis down the right found Ajakaiye who jinked into the area and was clipped in the area by Richie Danquah. Sow stepped up to stroke the ball past Turner into the net.

Cray did well at this stage to keep in the game and a Banton shot from distance was held by Turner and an from a right wing corner the ball was flicked on by Kenny Beaney to the far post to Buchanan who was denied by a block and the ball was cleared.

The Wands though came close to levelling the 34th minute when Uchechi down the left played a great ball across towards Coombes whose header was met by a fine sprawling save by Rob Tolfrey.

Before the break, Jai Reason fired well wide and then from a throw in down the left the ball in was flicked towards Dean Beckwith and cleared out to Reason who fired over. Then with the final action of the half, a corner down the right from Andy Drury was played to the near post but Beckwith knocked the ball off target. 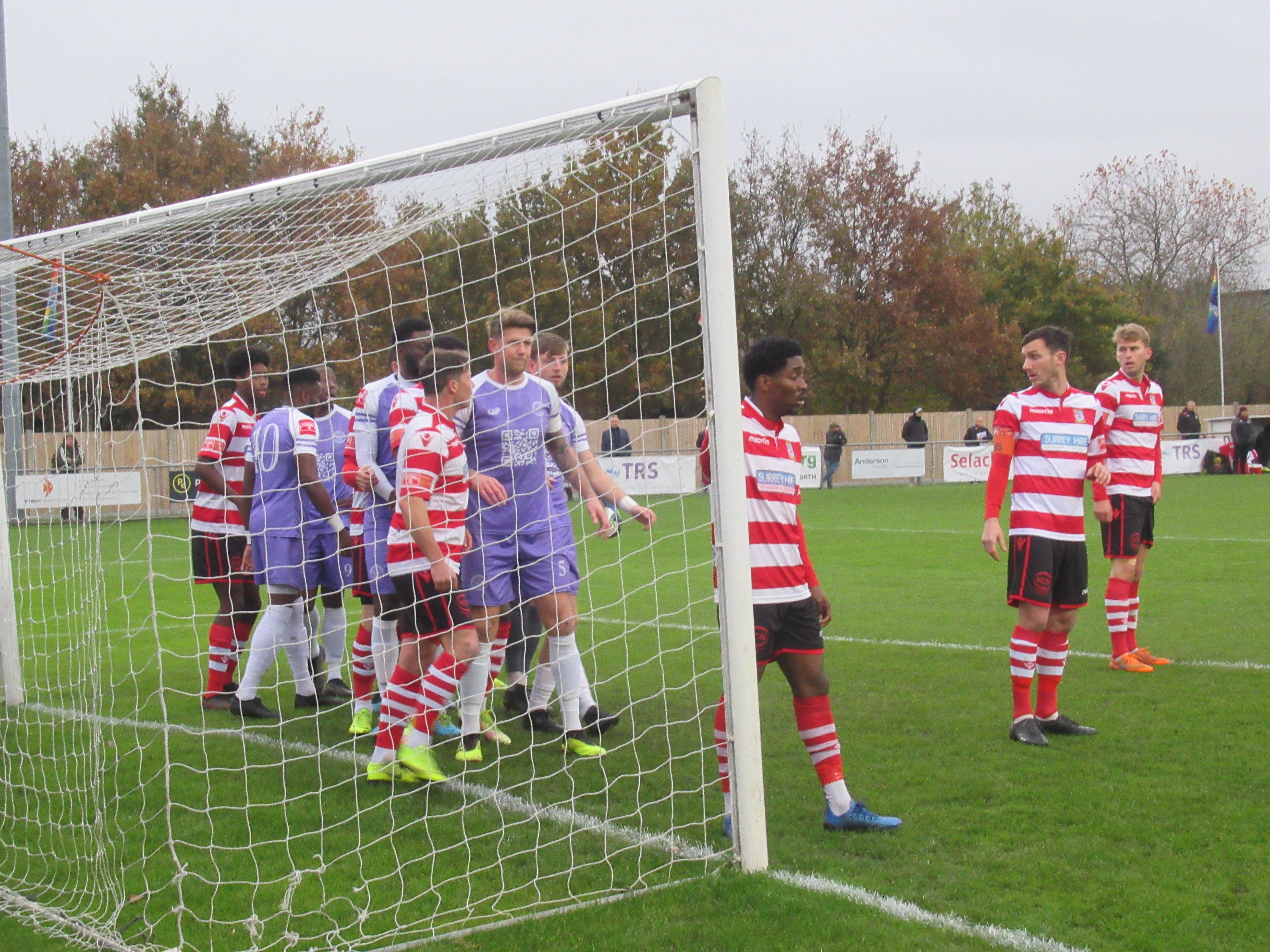 Kingstonian started the second half on the front foot with a couple of corners but it was Cray who had the first real chance of the half when Andy Drury played a ball through to Dickson down the left of the area who turned the ball wide of the left post on the stretch amidst Wands claims of a foul as he was looking to shoot.

Five minutes later though Cray were given a chance to level when a ball was played across from the left into the area and Cook was brought down by a combination of Simon Cooper and Tolfrey and Cook scored confidently from the spot. 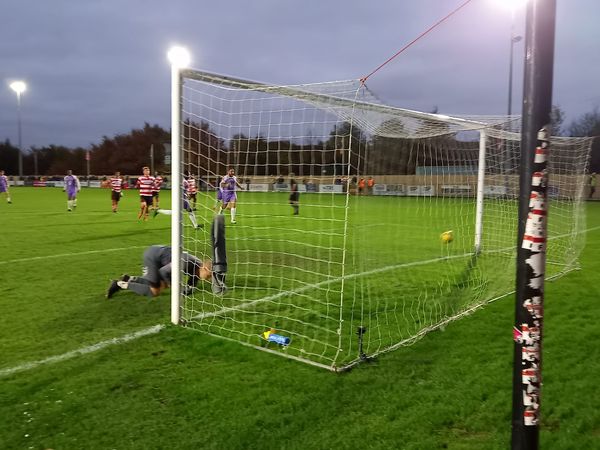 The game continued to go from end to end and Ajakaiye down the right for Kingstonian saw his shot pushed out well by Turner and following up Sow shot wide.  Then down the right an excellent cross from Clunis to the far post to Beaney was superbly blocked on the line by Beckwith.

In the 70th minute Cray almost went in front when the hard working Coombes set up Cook down the right and his driven cross shot went just wide of the left post with no Cray player able to get a touch to turn the ball in.

Three minutes later, Kingstonian went ahead with a classy piece of finishing from Buchanan who went on a charge forward but looked to be shepherded out towards the left by Freddy Barton but the in-form striker showed good vision to coolly lift the ball from 20 yards over Turner and into the top right hand corner for a goal worthy of winning any game.

Cray looked to get back into the game and fought hard for the remaining minutes but Kingstonian almost had daylight for the first time during the afternoon when Ajakaiye stabbed wide and then Murrell-Williamson set up substitute Aaron Lamont but his shot was well held by Turner.

The Wands were playing well but just couldn’t create that one big chance late in the game to snatch a draw and Kingstonian saw out the remaining minutes to win and remain sixth in the table but just three points off second placed Enfield Town. This was Cray’s third straight defeat and are now 20th in the table but there were plenty of reasons of optimism with the performance against a very good side and with some tough upcoming games including Wednesday night’s home game with 5th placed Folkestone Invicta.