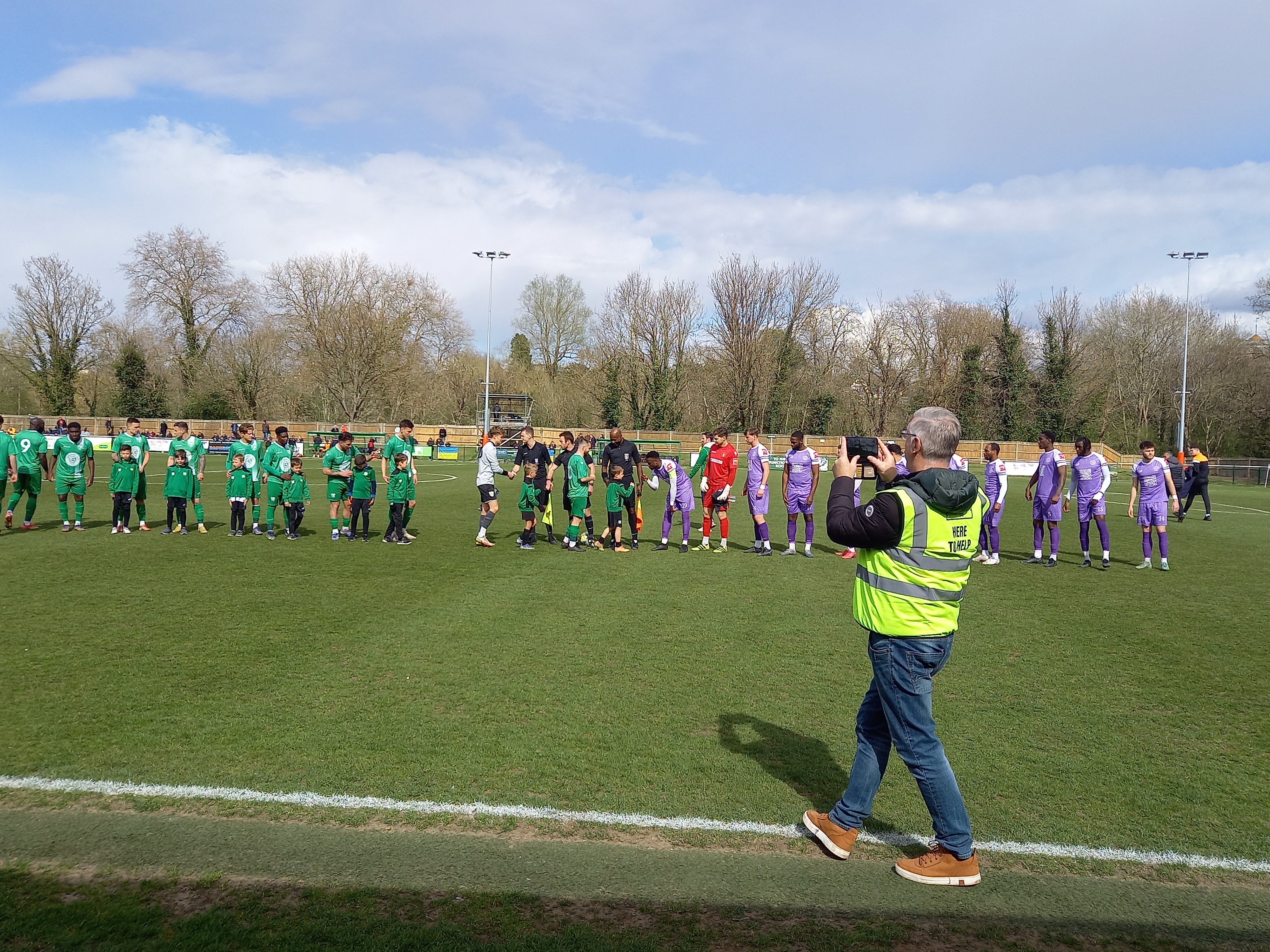 Cray Wanderers go into the final four games of the season in the relegation places as Leatherhead won a match between two of the bottom three as they came from behind to win with a goal in the last minute of the game. This made it four wins out of five for Leatherhead and three straight defeats for the Wands, all by the odd goal.

After a scrappy and tense first 70 minutes the game came alive in the latter stages as Ethan Kasier headed in a Kyel Reid free kick to put the Wands ahead.  Cray though have had difficulty hanging on to a lead in recent games and Leatherhead levelled ten minutes from time from the penalty spot scored by Loues Paget after Archie Burnett was adjudged to have been brought down by Kaiser.

The game went more end to end in the final ten minutes and Leatherhead went in front in the 89th minute through Max Worsfold’s left wing shot and held on for the win which keeps them one point behind Cray with four games remaining. 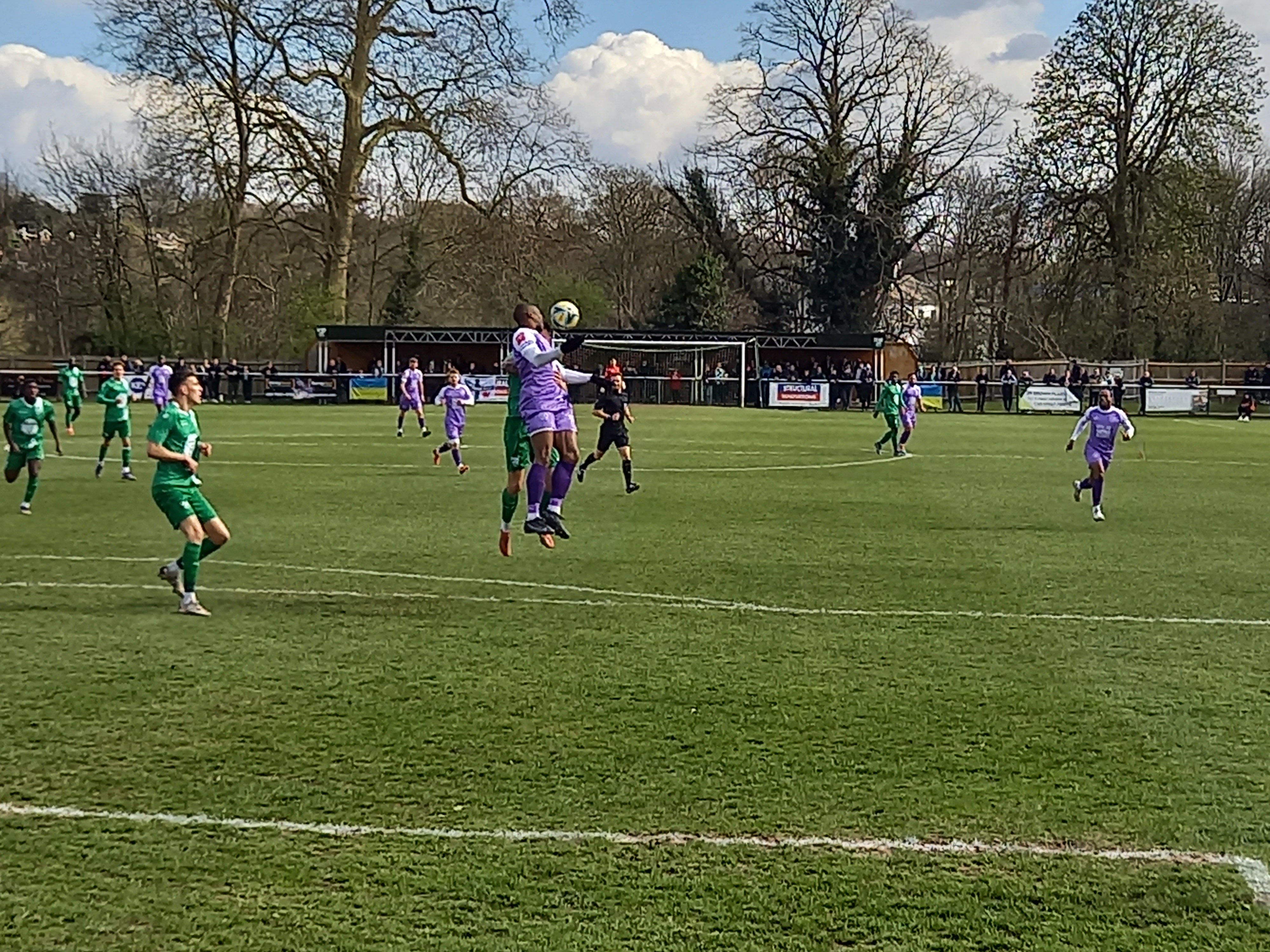 Cray were looking to get back to winning ways after two successive home defeats and from the side which played Kingstonian last Saturday there were a few changes to Neil Smith’s side.  Injuries during the week for Joe Wright and Freddy Barton as well as Cameron Brodie meant some enforced changes and Kasim Aidoo during the warm up also picked up a knock. Into the side came Denzel Williams, Luca Albon and goalkeeper Max Huxter who looks likely to finish the season in goal with Wright’s injury.

Leatherhead have been hard to score against of late and from the side which beat Horsham last Saturday and there were a couple of changes to Luke Tuff’s lineup with Jethro Hanson coming in for the suspended Shaun MacAuley and Aaron Lamont for former Cray Wanderers youth player Palace Francis.

With so much at stake this was never going to be a match high on aesthetic excellence or high on artistic merit and it was how it proved especially for the first hour as both teams who looked to get the ball down to play couldn’t find any fluency and it looked like being a game won by the first goal. 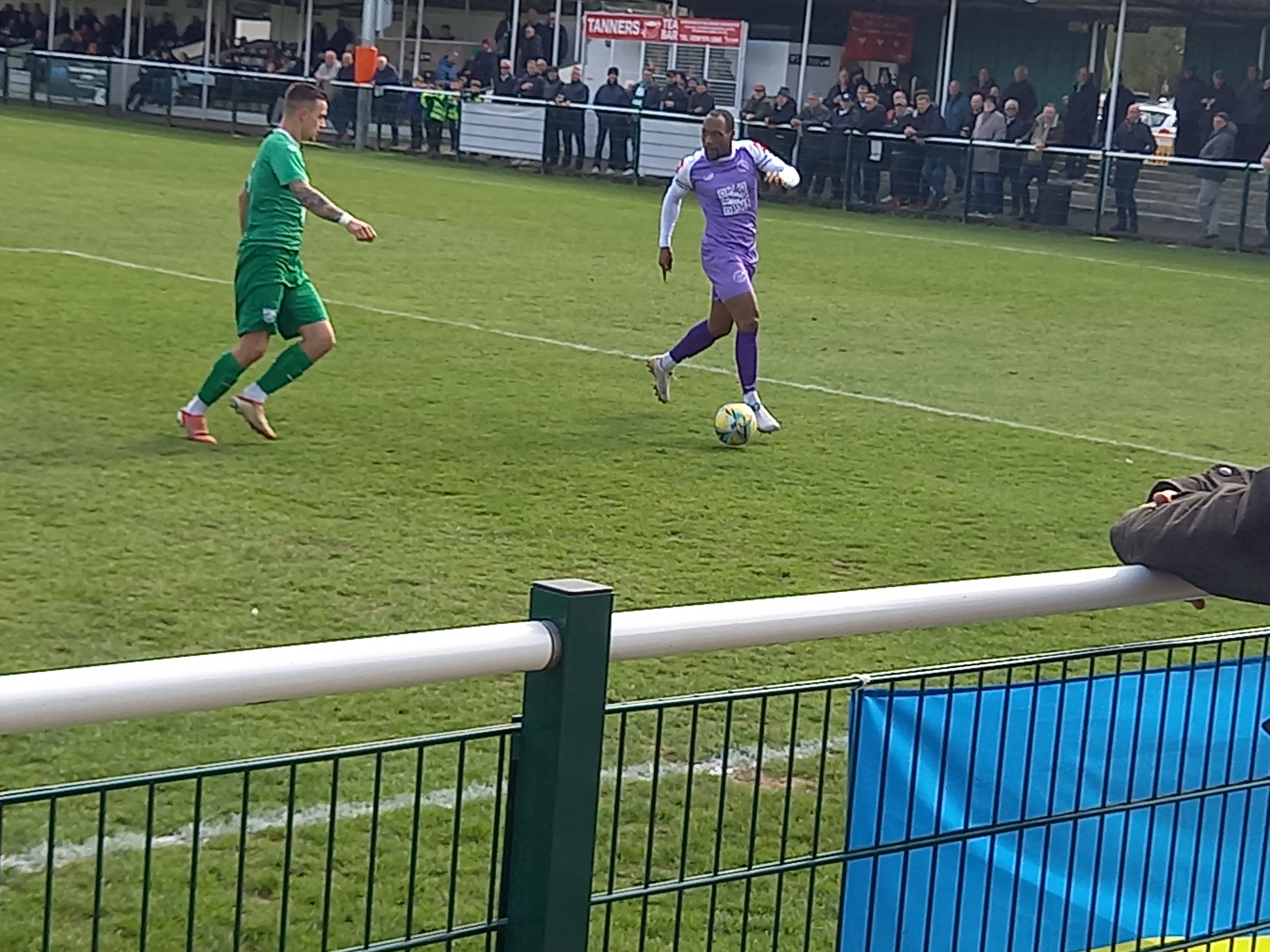 Cray shaded the opening exchanges and won three corners and from one of those, Anthony Cook’s ball to the near post just flicked off Ethan Kaiser and behind.

The first real shooting chance came in the 15th minute for Leatherhead when Jermaine McGlashan down the right fired in a shot which looked to have got a slight touch off the fingers of Huxter for a corner.

A couple of minutes later Cray came close when Chris Dickson found Jamie Yila down the right and he flashed the ball across the box and wide of the left post. 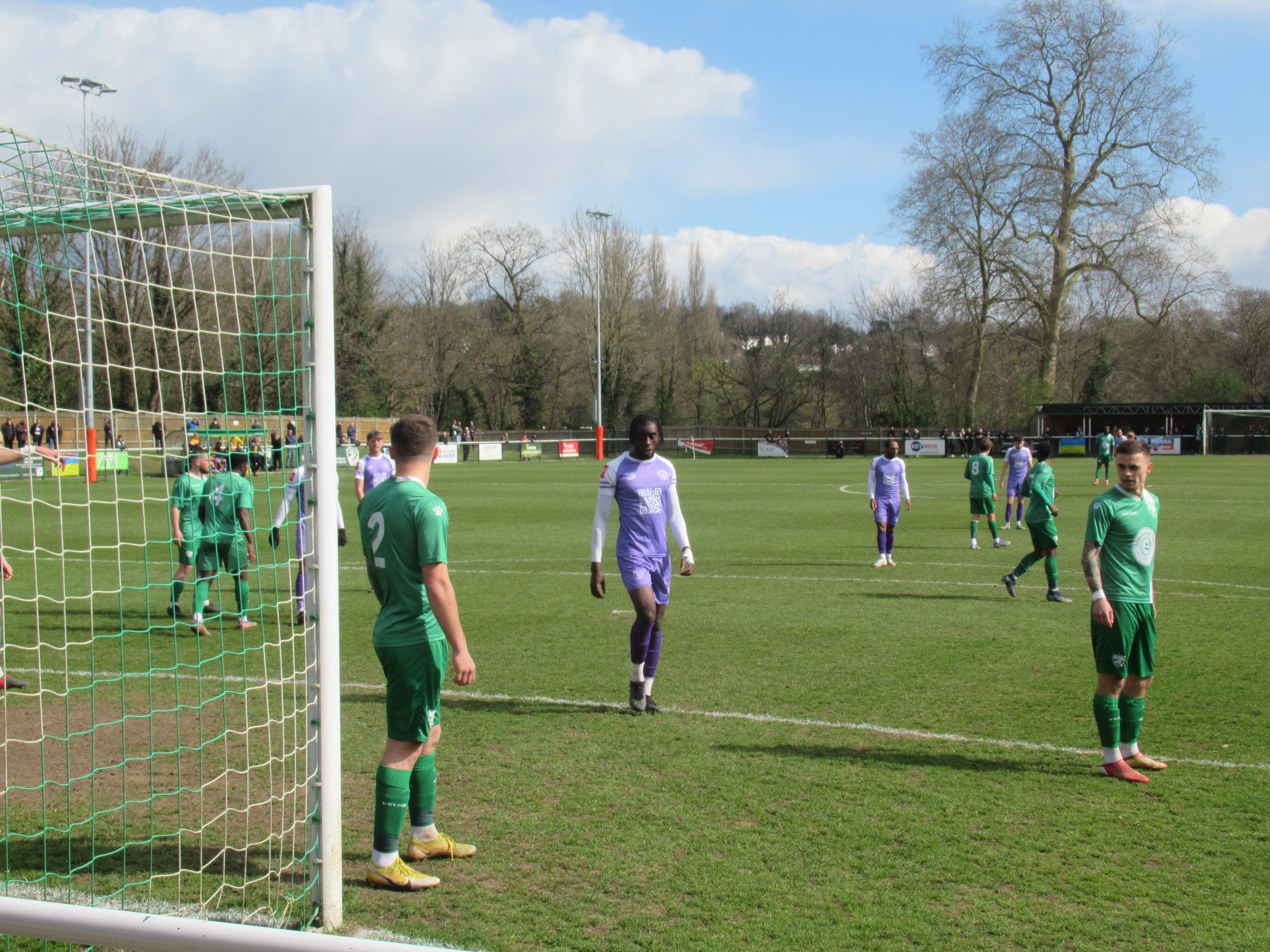 The Wands almost took the lead when Cook hit a shot from distance which looked to be going well wide but swerved wickedly and only just went past the left post.  Shortly after Luca Albon fired over the top from the edge of the area as Cray were the more threatening side.

The best passing move of the half saw Dickson find Cook down the right who found Albon who hit a half volley which went over the top. 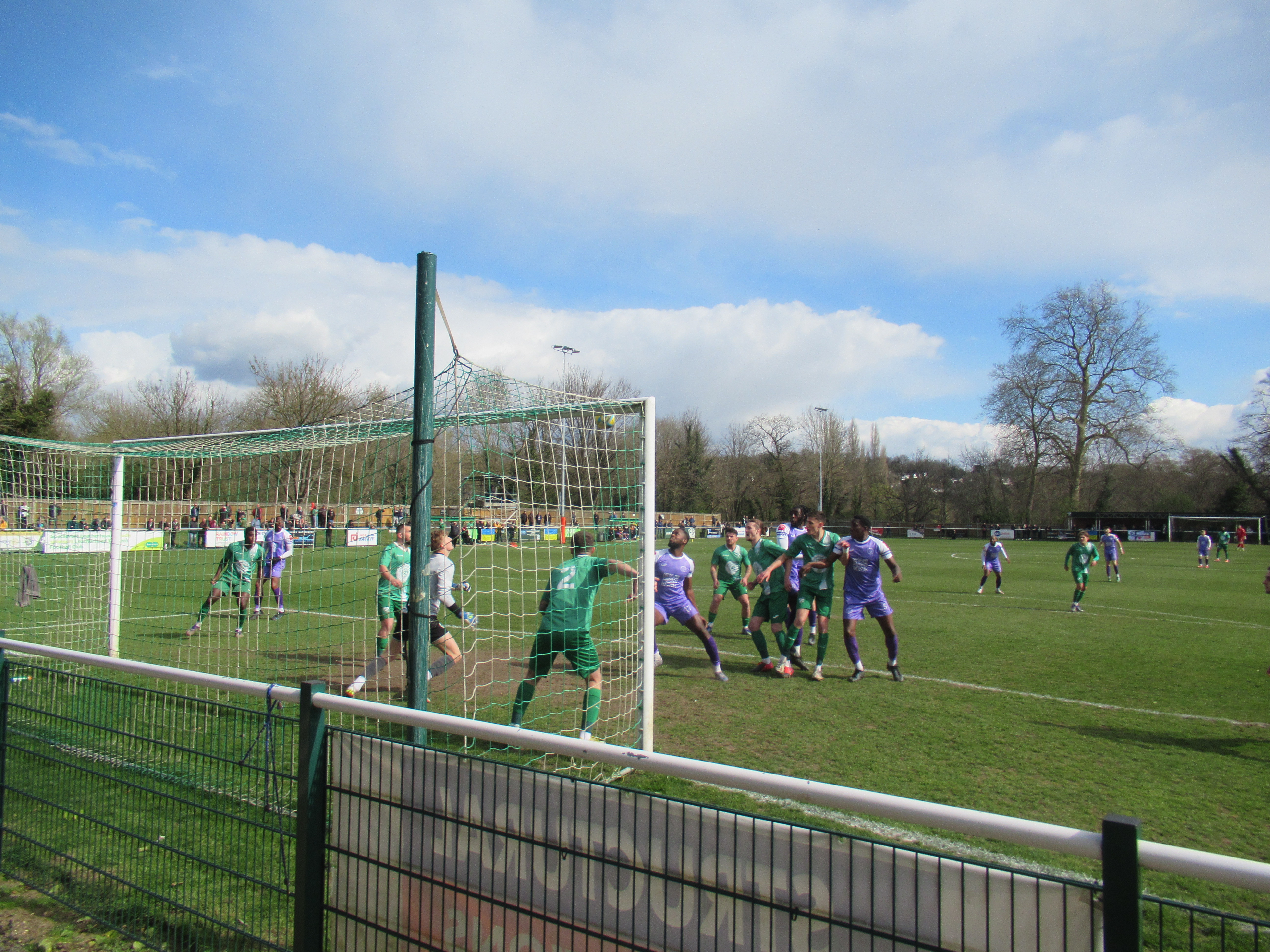 Despite plenty of endeavour and commitment the half dragged towards a goalless conclusion with Leatherhead the closest before half time when from a Max Worsfold corner down the left to the far post Cameron Black saw his header blocked inside the area.

The start of the second half again saw Cray again slightly in the ascendancy and a Kyel Reid cross from the right was glanced off target by Yila.  Then from a free kick in a decent position outside the area, Cook fired a shot wide. 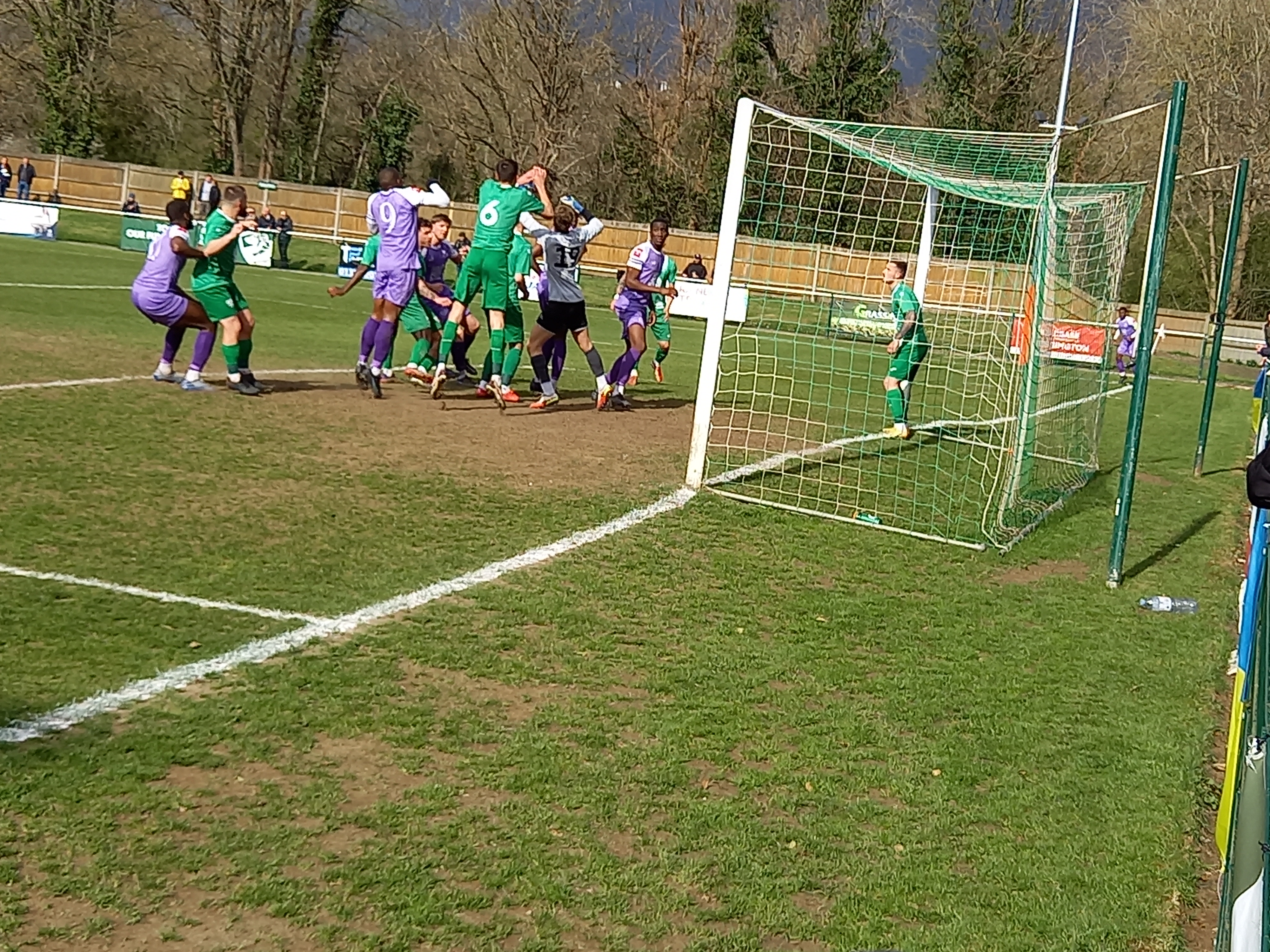 Chances were still at a premium but there were two in as many minutes around the hour mark.  For Cray, from a corner down the right, Reid’s ball into the area found Dickson who arrived at the edge of the six yard box and his goalbound shot was saved by the legs of keeper Jacob Adams.

The ball then went up the other end and Leatherhead created the best chance of the match when Worsfold down the left played a fine ball towards the far post and Kingsley Eshun steered the ball wide with the goal at his mercy and was a real let off at that stage.

One of a couple of little sleet flurries interrupted the flow of the game although Cray came close once again when Williams played a ball in towards Dickson but his shot was blocked and put behind for a corner.

In the 69th minute, the deadlock was broken and Cray went ahead when after the award of a free kick down the right, Reid’s ball into the box was hard to defend against and Kaiser rose to place a header wide of Adams and into the net for his second goal for Cray. 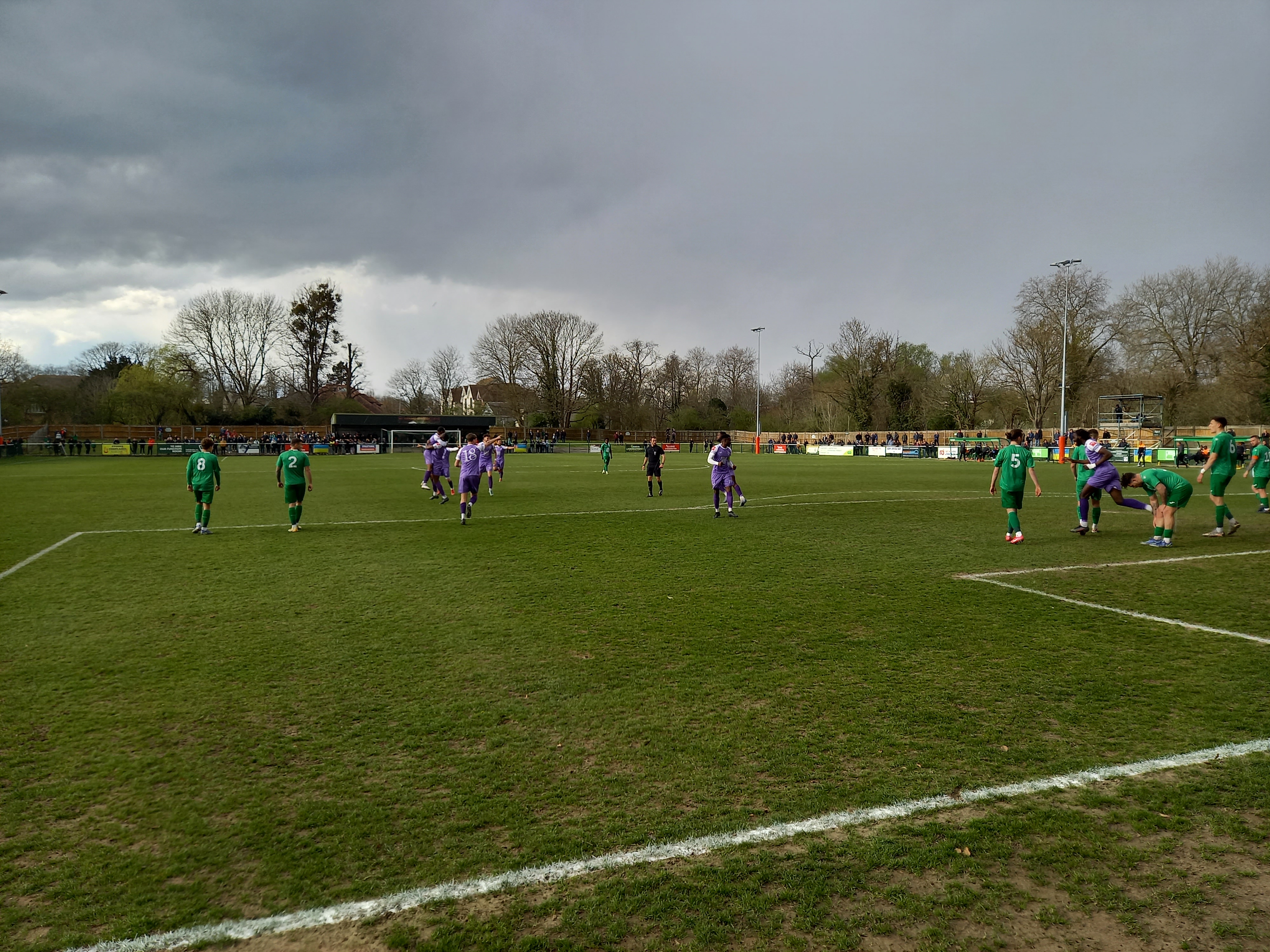 For Cray, Cook fired a free kick over but in the 80th minute Leatherhead were given a chance to get back into the match when a ball forward was flicked on to Archie Burnett who broke into the area and was deemed to have been brought down by Kaiser who was booked with fears perhaps he could have been sent off.  From the spot, Louie Paget stroked the ball into the bottom left corner and it was all square once again.

From here the earlier shackles on the game were discarded and the game became more end to end.  Cray came close to going back in front when Albon found Dickson who volleyed the ball into the net off the right post but was flagged offside.  Then a ball into the area was flicked on by Yila and Dickson just couldn’t get a connection and the ball went behind.

Leatherhead won a corner and were looking more spritely than at any time in the match but Cray almost won it in the 88th minute when Sam Wood’s cross from the left was met by Dickson from 12 yards but his first time shot was gathered by Adams.

A minute later the ball was up the other end and Leatherhead were playing the ball around the right of the area and the ball across to the left wasn’t really dealt with and Worsfold down the left edge of the six yard box drove a well struck shot into the bottom right corner past Huxter and into the net.

Leatherhead had shown character to come back but there was still some stoppage time but Cray just couldn’t find that killer ball or create another chance to snath a draw at the end.

In the end Leatherhead held on to win and boost their chances of survival and maintained their own great escape hopes.  Cray are now 21st on 32 points but just one point behind Merstham, Brightlingsea and East Thurrock who themselves have won three matches in a row and it is really out of those five teams to fight it out for the relegation places. 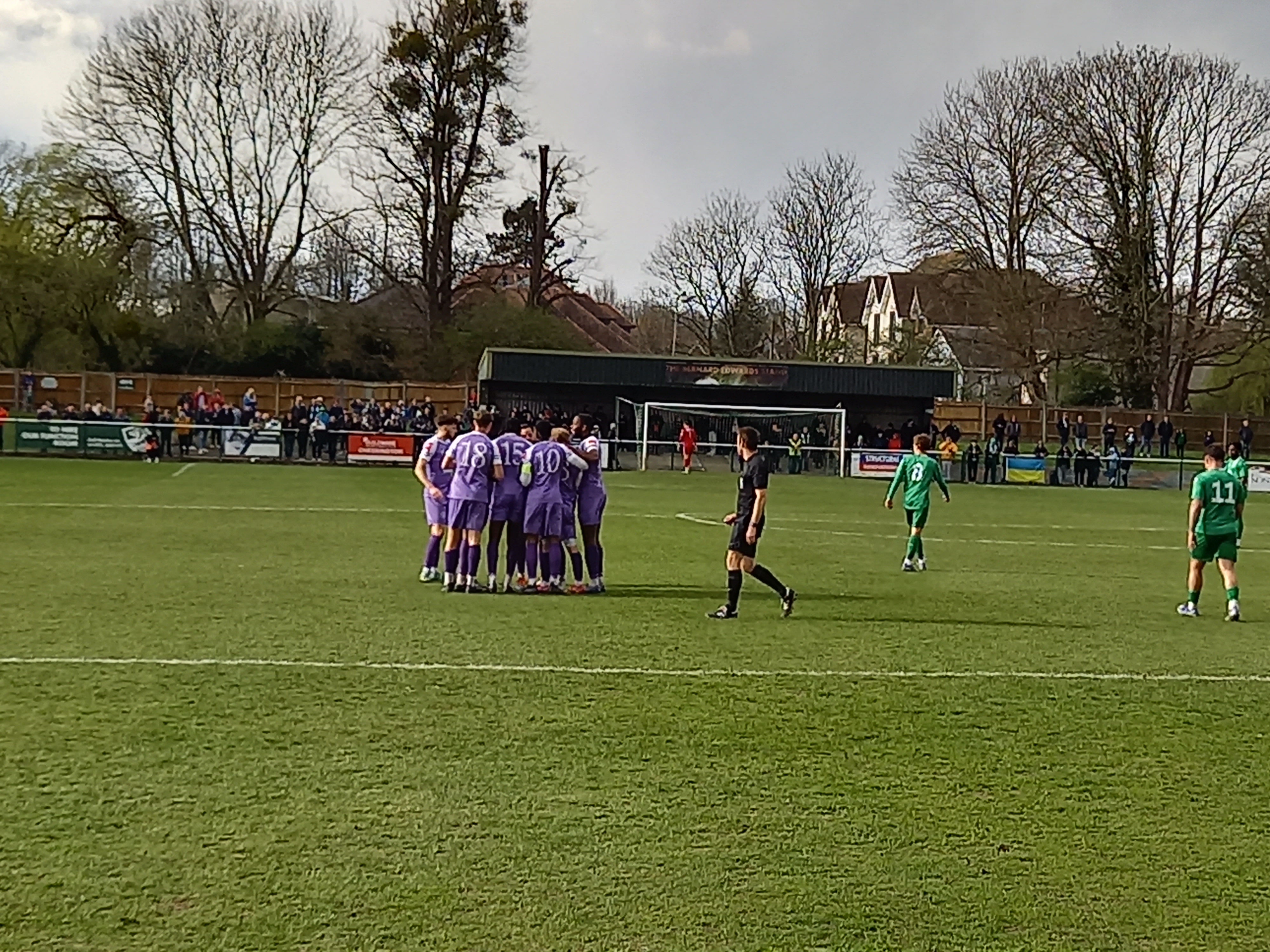 All is not lost for Cray and have performed well against the top sides and face a tough challenge at home to 4th placed Hornchurch on Sunday, 10th April but will be doing their utmost to get the points they need to ensure Isthmian Premier football for next season. They may have to do it the hard way with also trips to Enfield Town and Bishop’s Stortford to come with a home game with East Thurrock sandwiched in-between but still plenty to play for but just perhaps need a modicum of luck and also to just show a bit more resilience when Cray go ahead as rather a lot of points have been lost from winning positions especially since the turn of the year.