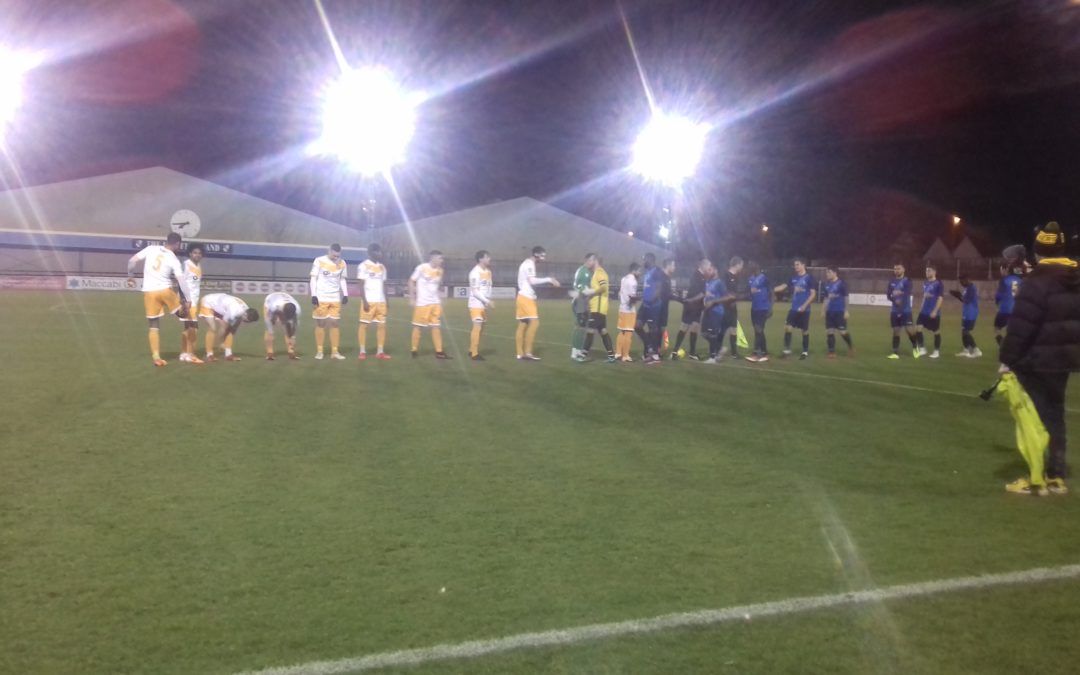 Cray Wanderers remain unbeaten away from home in the Isthmian Premier and moved up to 4th place in the table after a hard fought victory at Wingate & Finchley courtesy of an early Joel Rollinson strike.

On a chilly but thankfully dry and still evening in North London, Cray got off to a great start with Rollinson’s second goal in just two games with a classy finish in off the post after just three minutes.  From here though, Cray didn’t canter to victory and Wingate & Finchley twice hit the post and some stoic and at times last ditch defending preserved the win and a clean sheet.

Both sides had won at the weekend with Cray in excellent form to beat Cheshunt 6-1 at Hayes Lane.  From the side which started that game in came Charlie Allen and Andre Coker in place of Karl Dent and Ben Mundele.   Wingate & Finchley picked up a big win at Lewes on Saturday to move out of the bottom three and named an unchanged side. 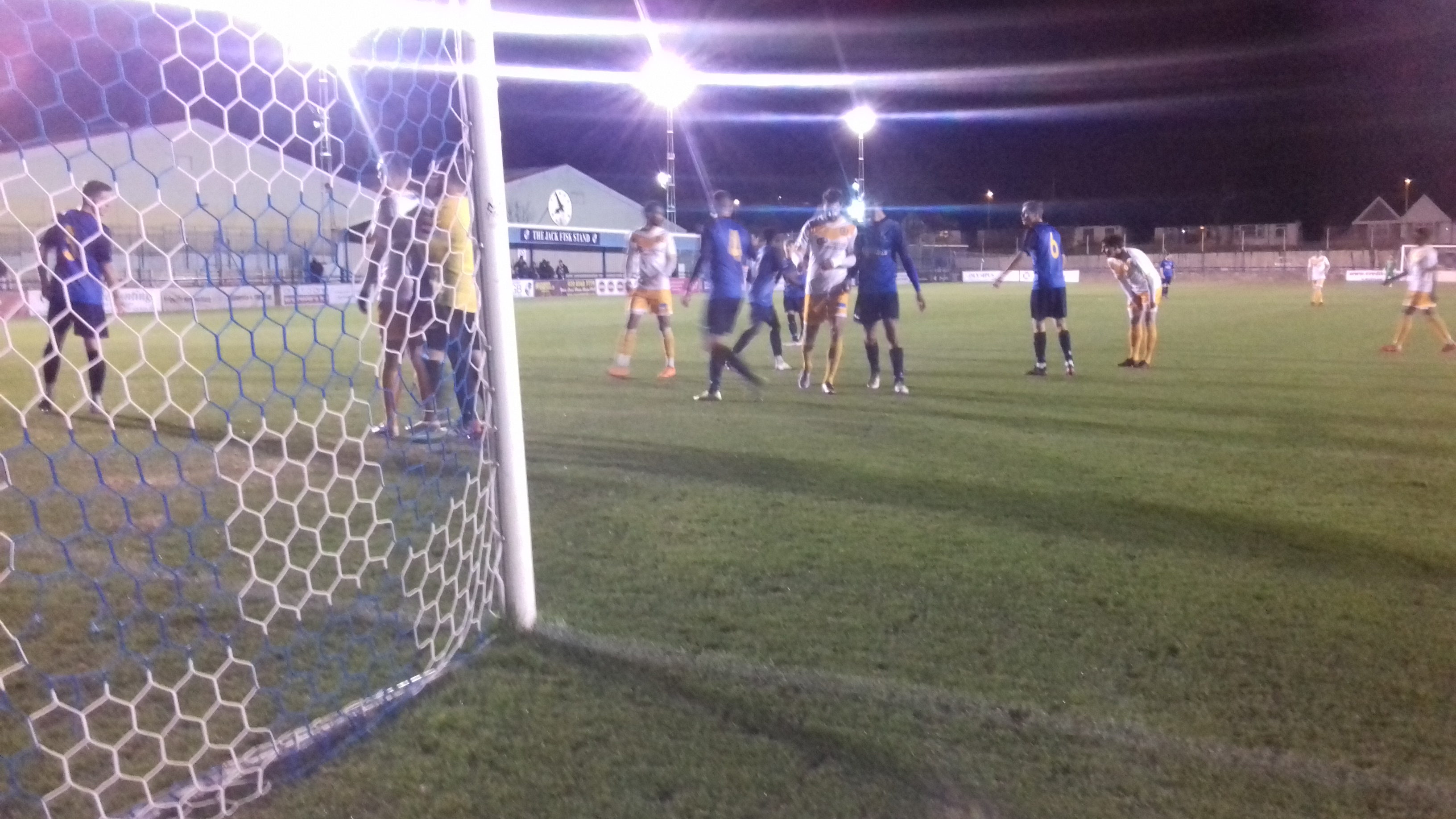 The game started with Cray looking confident and got off to the perfect start when the ball was worked down the left and Joel Rollinson picked the ball up in midfield, strode forward and hit a well struck shot from the edge of the area which came back off the right post and into the net.

This set the tone for a lively first half and for the home side, Alex Read broke forward and saw a shot blocked from just outside the area

Cray though were looking sharp and putting some good passing moves together and almost went two nil up by the tenth minute when down the left, Joe Taylor set up Bradley Pritchard who shot just over the bar.  This was followed by Andre Coker finding the impressive Tom Carlse who down the left broke into the area and pulled a shot across goal and fractionally wide.

Wingate & Finchley were looking lively going forward and Henry Ochieng made a run forward from midfield and hit a shot from 20 yards which was safely gathered by Lewis Carey.  The home side were having a good spell and were unlucky not to score when down the left, Luke Ifil’s cross was met by the head of Ahmet Rifat at the far post and was pushed round the post by Carey.    Cray were still playing well and composed and Taylor from the edge of the area shot over the top

The best early chance for Wingate & Finchley came when a ball was played into the path of Olwaseun Akinsanya who from inside the area flashed a shot just wide of goal.  Then from a free kick on the right edge of the area, Charlie Ruff hot over the top. 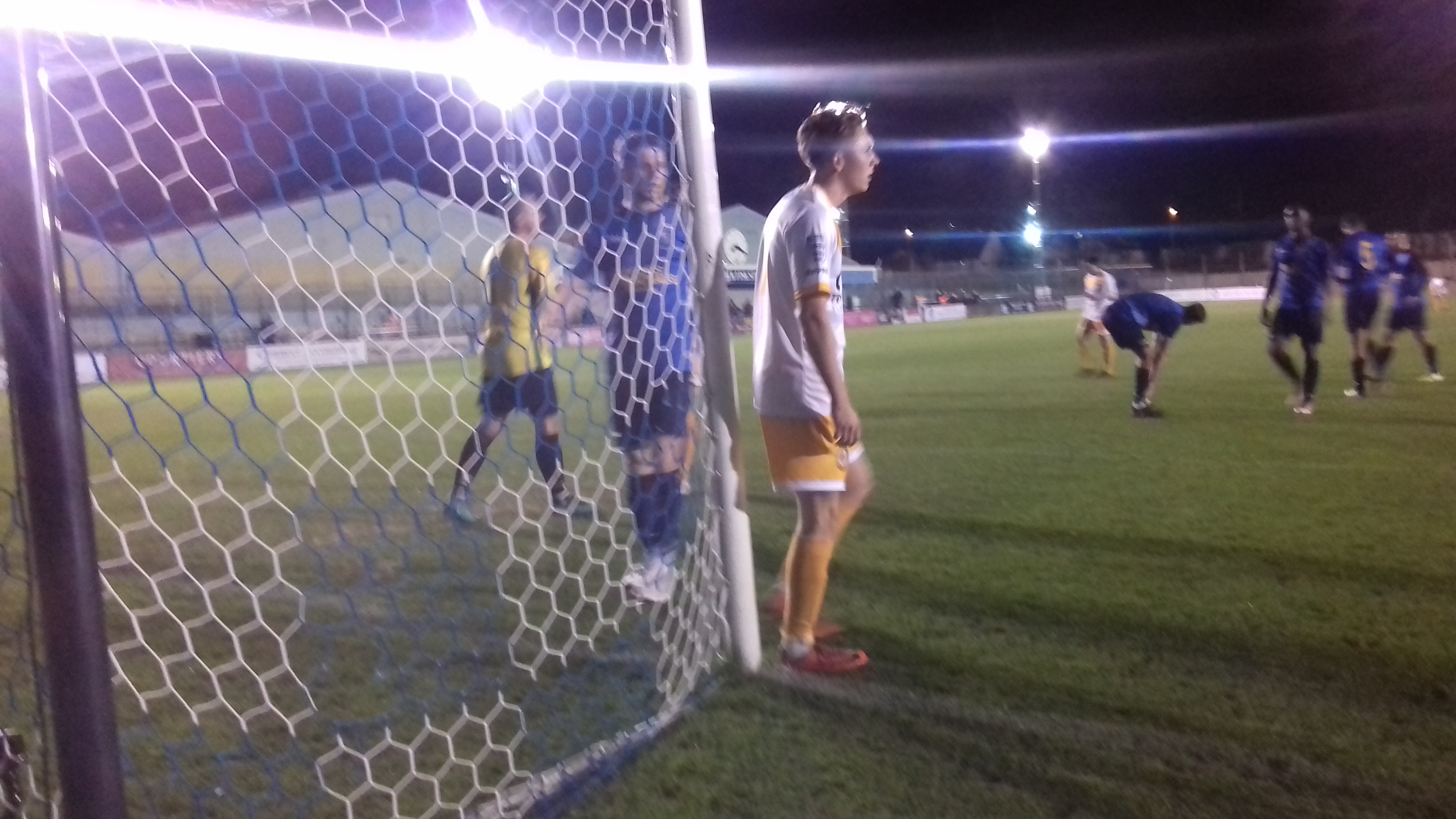 The game was being played at a brisk pace and Cray looked to grab a second goal and Taylor and Charlie Allen combined to set up Coker but his shot lacked power and was held by keeper Shane Gore.

Cray came close to increasing their lead when they were awarded a free kick just outside the area following a foul on Coker.  From the free kick, Lee Lewis curled the ball round the wall and Gore did superbly to push the ball out and away from goal.   Then, Pritchard and Coker combined to set up Lewis who from just outside the area fired a low shot which was held by Gore. 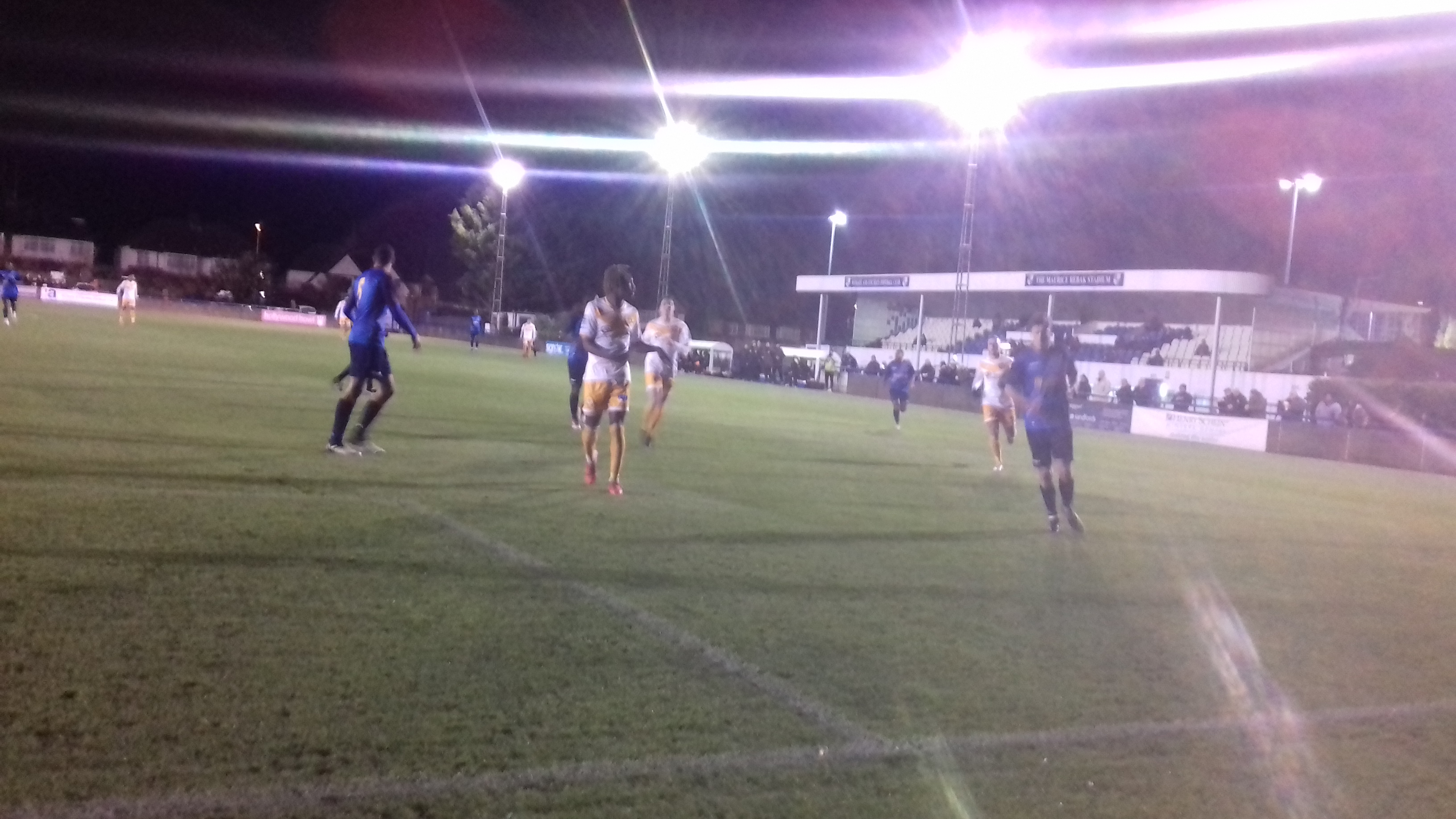 Cray though had something of a let off just before half time when Ruff’s ball into the box was flicked on by Read and Grace glanced a header towards goal which came off the left post and was claimed by Carey.

The Wands made a change at half time with Karl Dent coming on for Lee Lewis.  Cray dominated the early exchanges of a more scrappy second half and enjoyed the better possession and were defending well and fairly comfortably.

Chances which were falling in the first half were fewer in the second but Cray did come close to putting daylight between the sides just after the hour when down the left, Taylor did well to set up Dent who shot over the bar from 18 yards.

Then following a couple of corner, Dent’s cross from the right was helped on to the far post but Coker couldn’t get a firm connection and the ball went wide.

Wingate & Finchley though would end the game strongly and Ruff found Alphanso Kennedy down the right and his ball across was met by Alex Read but his shot was blocked in the area and following up shot over the bar. 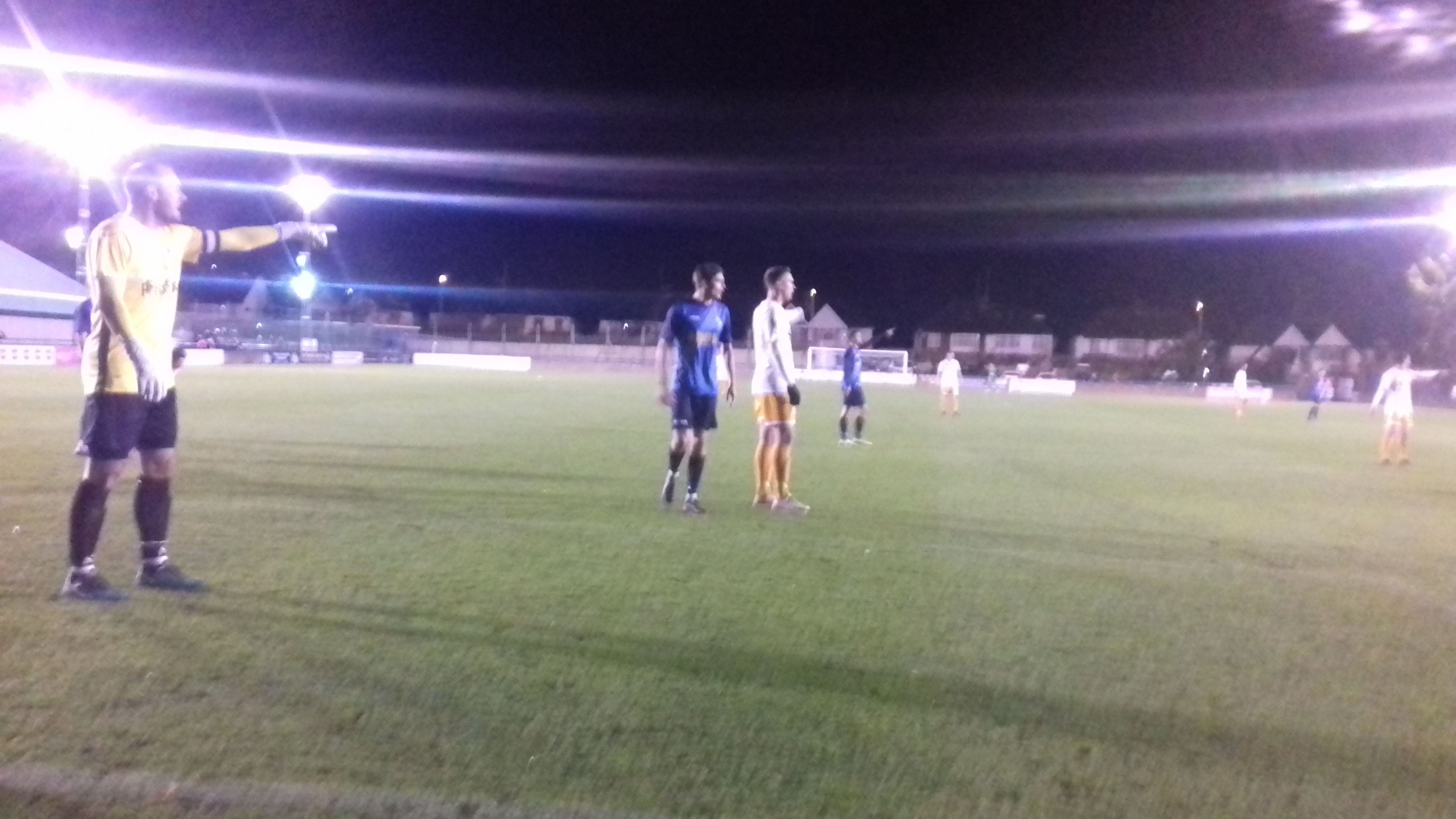 In the 81st minute Cray had something of a let off when Oluwatimilehin found Luke Ifil down the right and his driven cross-shot came back off the right post and along the line and off the left post and following up Akinsanya couldn’t turn the ball over the line.

Then as the home side pressed down the left, Charley O’Keefe found Ochieng whose low drive was turned round the right post by Carey and behind for a corner.

Cray looked like they may have quelled the tide as the game went into four minutes of added on time but there was still time for one more late scare when Ochieng found Akinsanya inside the area and his shot was blocked in a goalmouth scramble and looking to follow up, Grace’s shot was blocked and put behind for a corner.

Cray were able to see out the remaining threat and were perhaps at the end relieved to hear the final whistle to pick up a big three points and maintain their unbeaten start away from home to the season.  The second half had been a bitty affair but certainly in the first half, Cray played some very good attacking football and Rollinson looks a major talent with a big career ahead of him and there were very good displays from Nelson and Leader at the back, and Allen and Carlse were impressive too.   Wingate & Finchley have struggled to score goals this season but possibly out of all the away games Cray have played worked as hard as any team and perhaps on another day might see themselves a tad unfortunate not to have picked up a point from the game and looked better than a bottom three side. 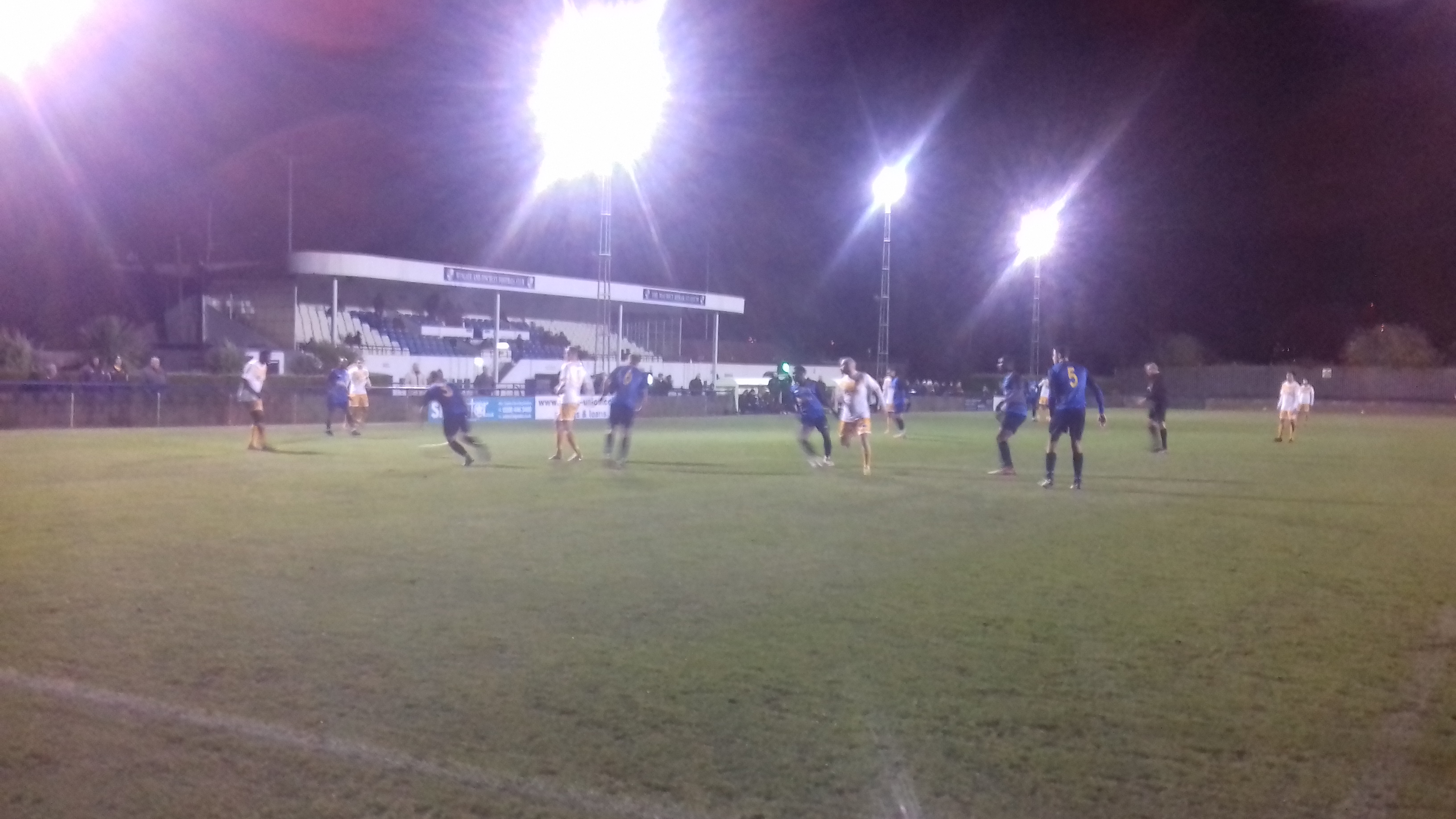 For Cray though, they march on and up into 4th place on 28 points and next head to Brightlingsea Regent on Saturday unbeaten in six games in the league and looking to maintain their playoff push.