Cray Wanderers got back to winning ways after seven straight defeats with a fine, gutsy win at a very good Carshalton Athletic side on a rain lashed afternoon. 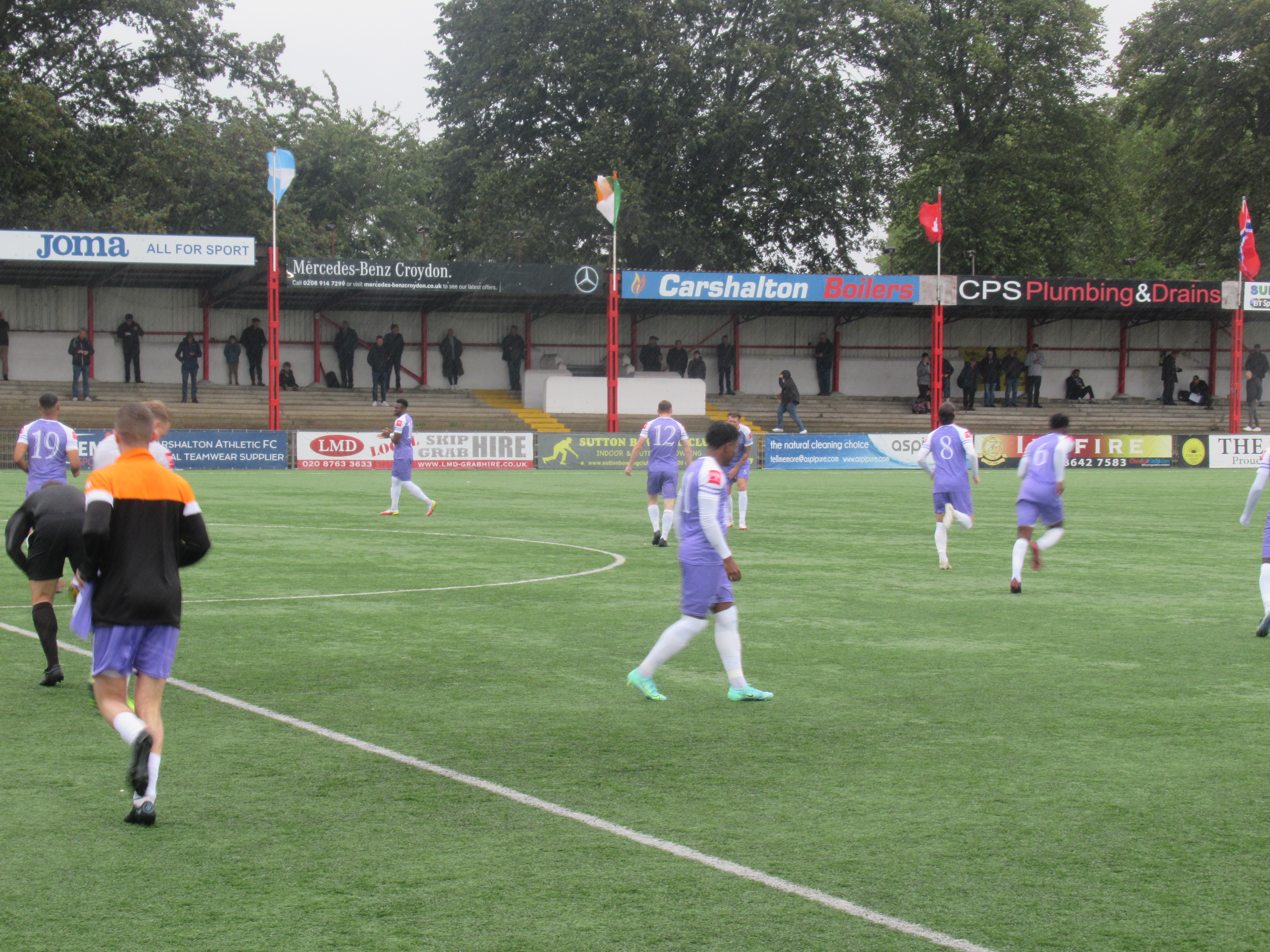 The Wands had to soak up a lot of early pressure from the home side but went ahead on 25 minutes when defender Marvin McCoy headed in a Anthony Cook corner to score on his debut.  Carshalton had a chance to level on 36 minutes but Dan Bassett’s penalty was saved by Jack Turner.  The second half began with an early brace of goals as Dean Beckwith was on hand to turn Adam Coombes flick on goalwards and although cleared was adjudged to have been over the line on 50 minutes.  Two minutes later thoughCarshalton pulled a goal back through Dan Bennett’s header. Cray though soaked up home side pressure and broke away to score a fine third goal on 72 minutes through the impressive Andy Drury. The Wands held on for their first win at Colston Avenue since January 2014.

Cray were 19th going into the game following a six game league losing run and from the side which started against Wingate & Finchley on Wednesday night, into the side came Marvin McCoy, Dean Beckwith, Adam Coombes and Jamie Yila in place of Freddie Cray, Danny Kedwell, Freddy Barton and Quaine Bartley.  Peter Adeniyi’s Carshalton side were unchanged from their last game, a 3-1 win at Cheshunt last Saturday.

The rain was pretty unrelenting all afternoon and there was pretty incessant early pressure from the Robins and lively Lewis White fired an early shot just wide of the right post and then Paris Hamilton-Downes saw a shot deflected through to Jack Turner. 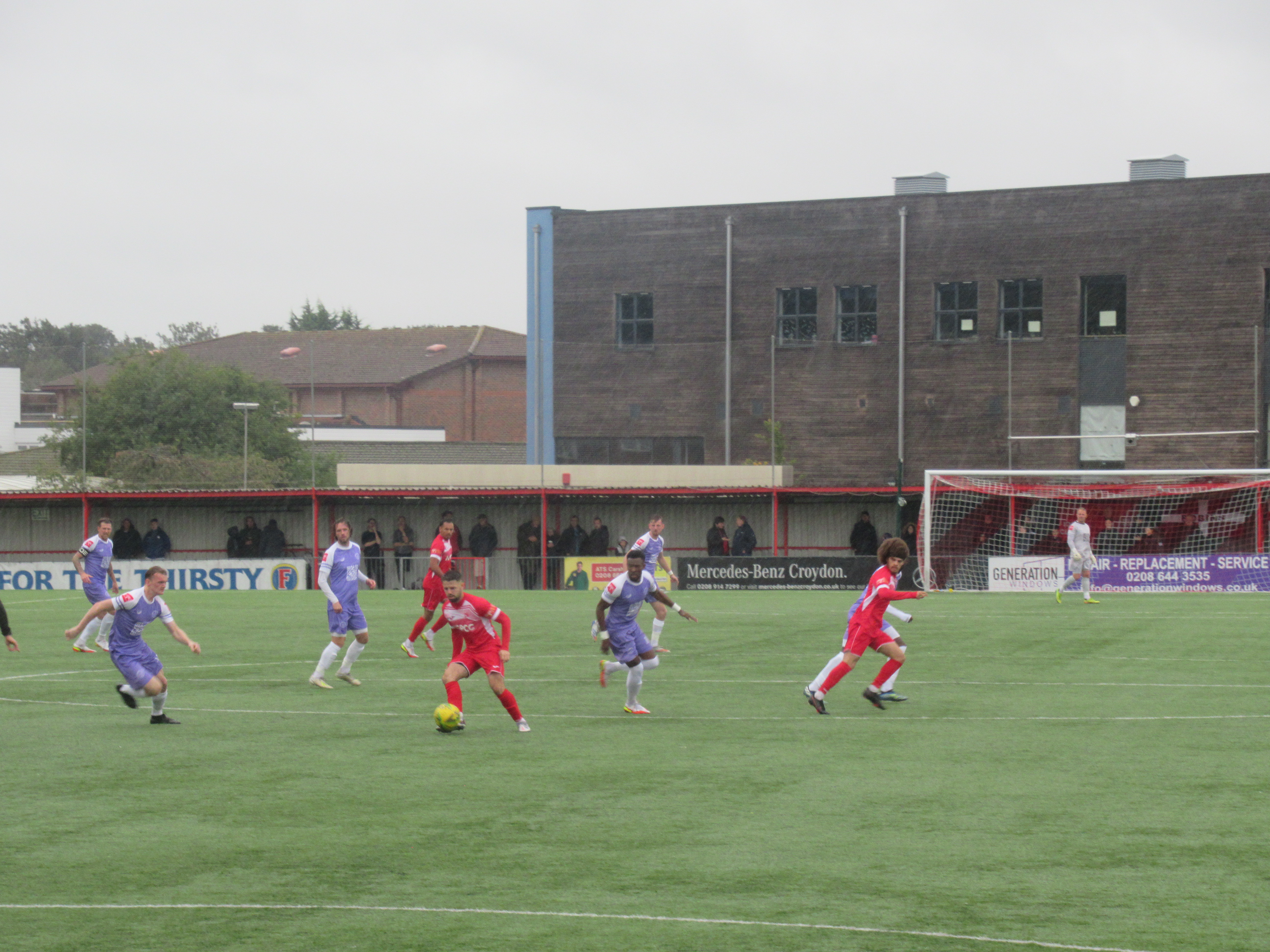 Down the left Jordan Cheadle put over a cross which was only half cleared out to White who lashed a shot over the angle of left post and crossbar.  This was followed by a fine run from Dan Hector which ended with a shot being blocked on the edge of the area.

Cray though were defending well and looked for a break when Turner’s ball found Jamie Yila down the right who did well to put over a cross to the near post for Adam Coombes but was well claimed by goalkeeper Lloyd Thomas.

Carshalton continued to press and following a good break, Hector’s pass found White who broke through down the right and was denied by a fine save by the legs of Turner.  Then Dan Bennett found White again down the right who went round Turner but his goalbound shot was cleared off the line by Dean Beckwith.

A minute later on 25 minutes Cray went in front after Anthony Cook’s speculative shot was deflected behind for a corner, from the right wing kick into the box the ball was met impressively by the head of Marvin McCoy and into the back of the net. 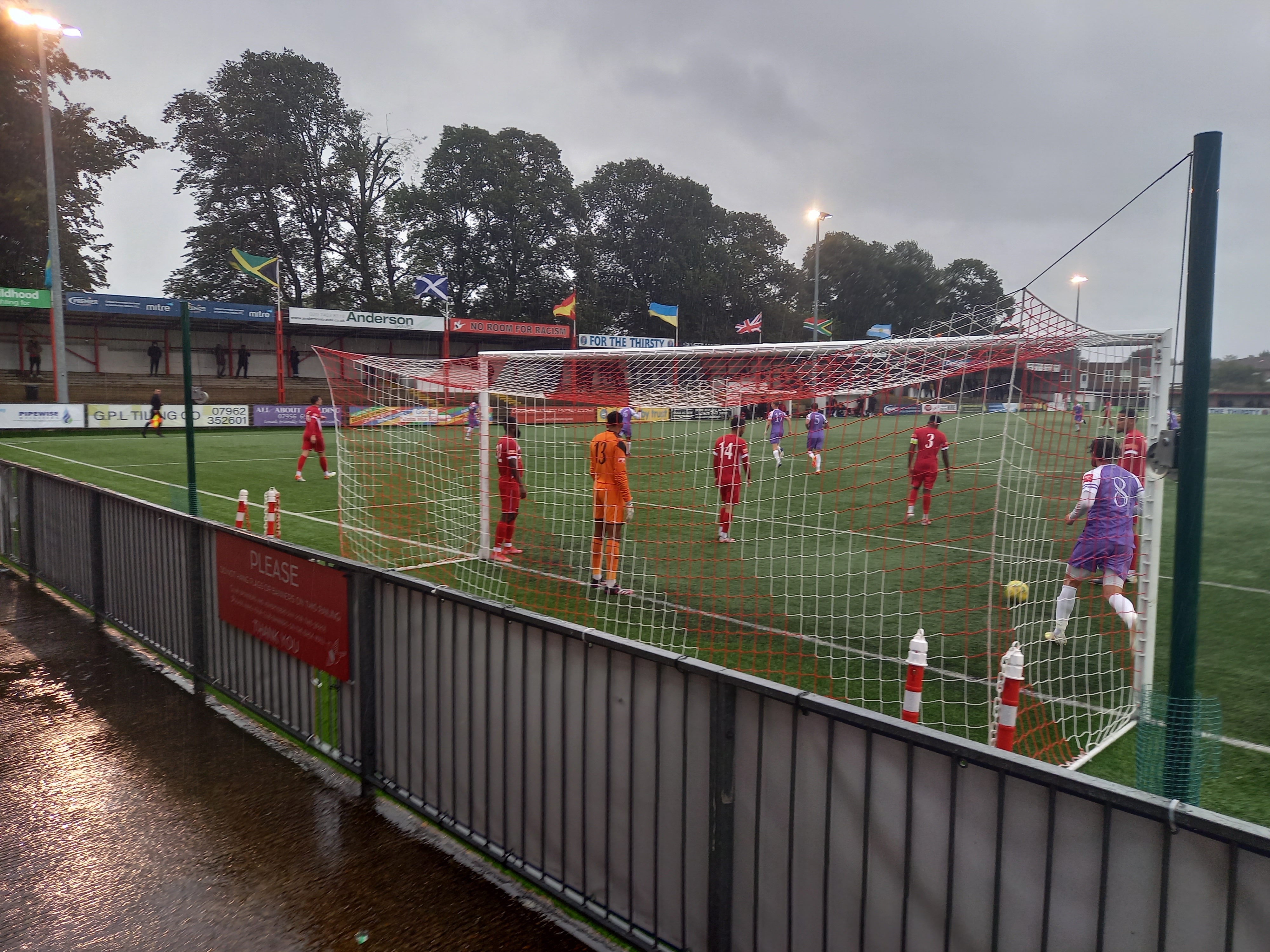 Cray were defending well and looking to break but Carshalton had a good chance to level when a fine ball was played through to Danny Bassett but from the right of the area pulled his shot wide of the left post.

On 36 minutes, Carshalton were awarded perhaps a rather harsh penalty when a cross from the right by Bassett was adjudged to have been handled by Andy Drury. However, from the spot, Bassett’s kick to the right was well saved on the line by Turner.

Before half time, Cray began to move forward with a bit more confidence and much more resolute than in previous weeks with Beckwith, Drury, McCoy and Cook in particular outstanding while Coombes up front worked hard to get things going. 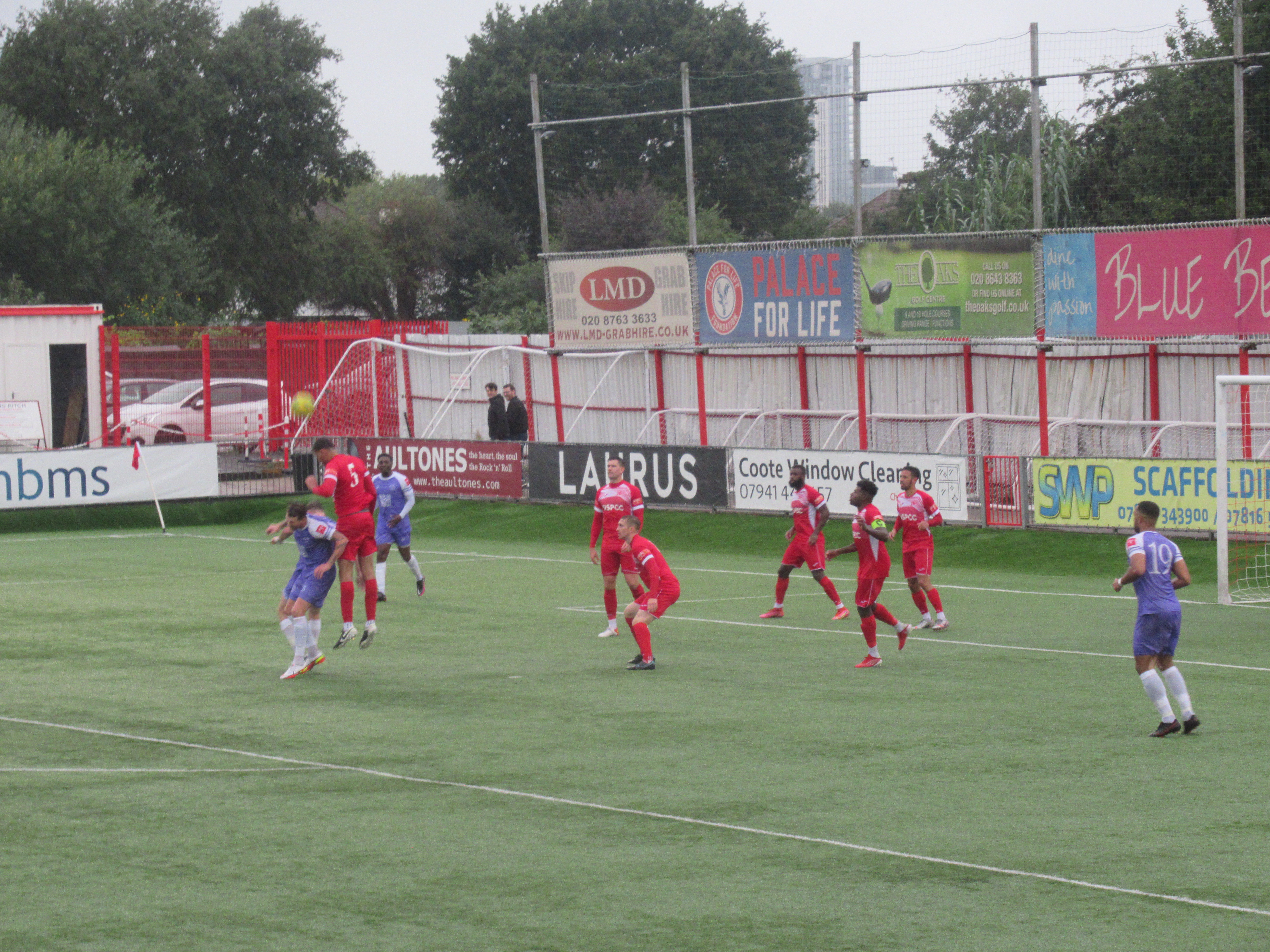 Still the rain fell in the second half and five minutes into the second half, Cray went two nil up following the award of a free kick down the left.  From the kick, Cook’s cross into the six yard box was prodded goalwards by Coombes and Beckwith stuck out a leg and although Thomas got a good hand to keep the ball out the ball did appear to have crossed the line and a goal was given after confirmation from the linesman.

Carshalton though pulled a goal back two minutes later when Jordan Cheadle’s cross from the left to far post was headed into the net by Dan Bennett.

This provoked another spell of pressure from Carshalton and after a cross was put behind by Beckwith for a corner, the ball came to Bennett whose low near post shot was well saved by Turner’s legs.

Cray had a half opening when Richard Afrane-Kesey broke into the area and lifted a shot over the bar but the flag had been raised for a tight offside call. 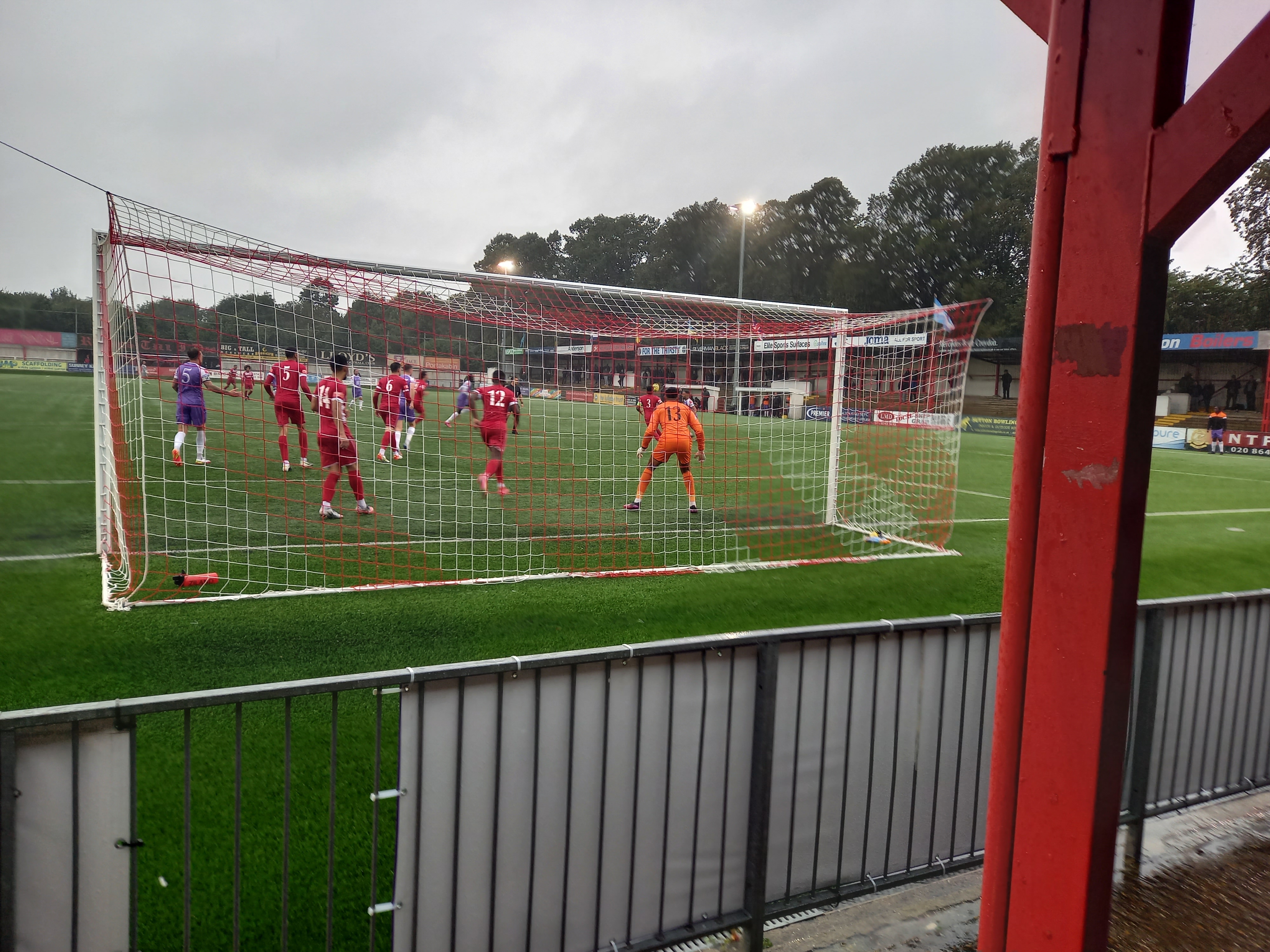 Still though Carshalton pressed and a good move between Harry Ottaway and Tommy Blackburn saw the ball come to White who was denied by Turner who parried the shot away.  Then a corner from the right by Bennett to the far post was glanced goalwards by Jalen Jones but was cleared away by Tom Hanfrey for another corner.

Cray though were managing the game well and from a breakaway Jamie Yila tested Thomas with a shot following a run from his own half.

Then on 72 minutes, Cray restored their two goal advantage with a fine goal as Cook and Coombes combined through the middle and the ball was played to Andy Drury down the right of the area who crashed home a superb angled shot into the bottom left corner to make it 3-1.

The goal seemed to quell Carshalton’s fire for a while and Cray were able to keep the ball cleverly and through good substitutions which saw Freddy Barton, Quaine Bartley and Jack Hanson come on for the last 20 minutes. 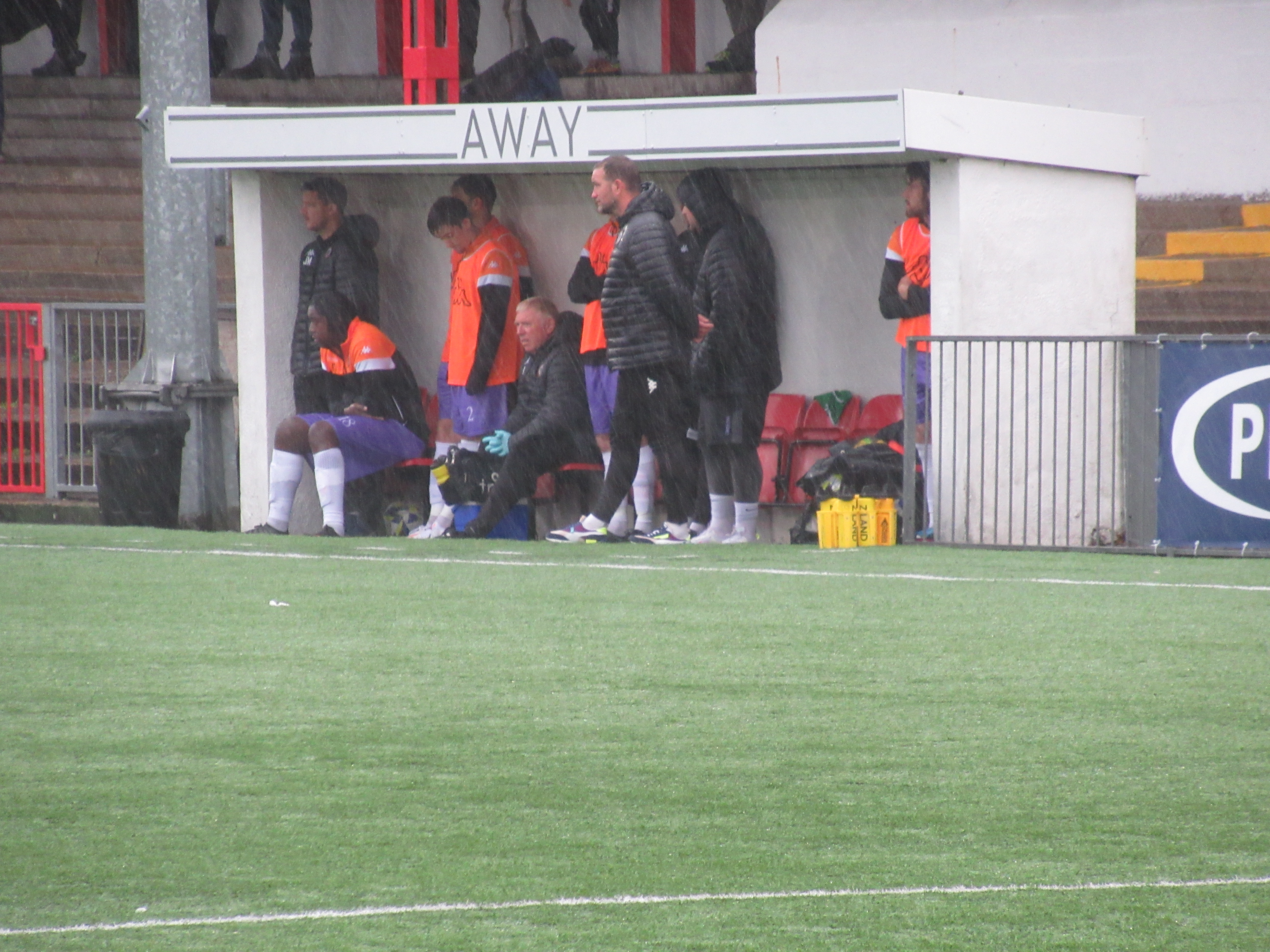 As the game neared the end Carshalton had a late flurry and Hector shot over the top and then Bennett curled an effort just over the bar.  The last opening came to Cray from a free kick down the left from which Cook curled a shot wide of the right post. 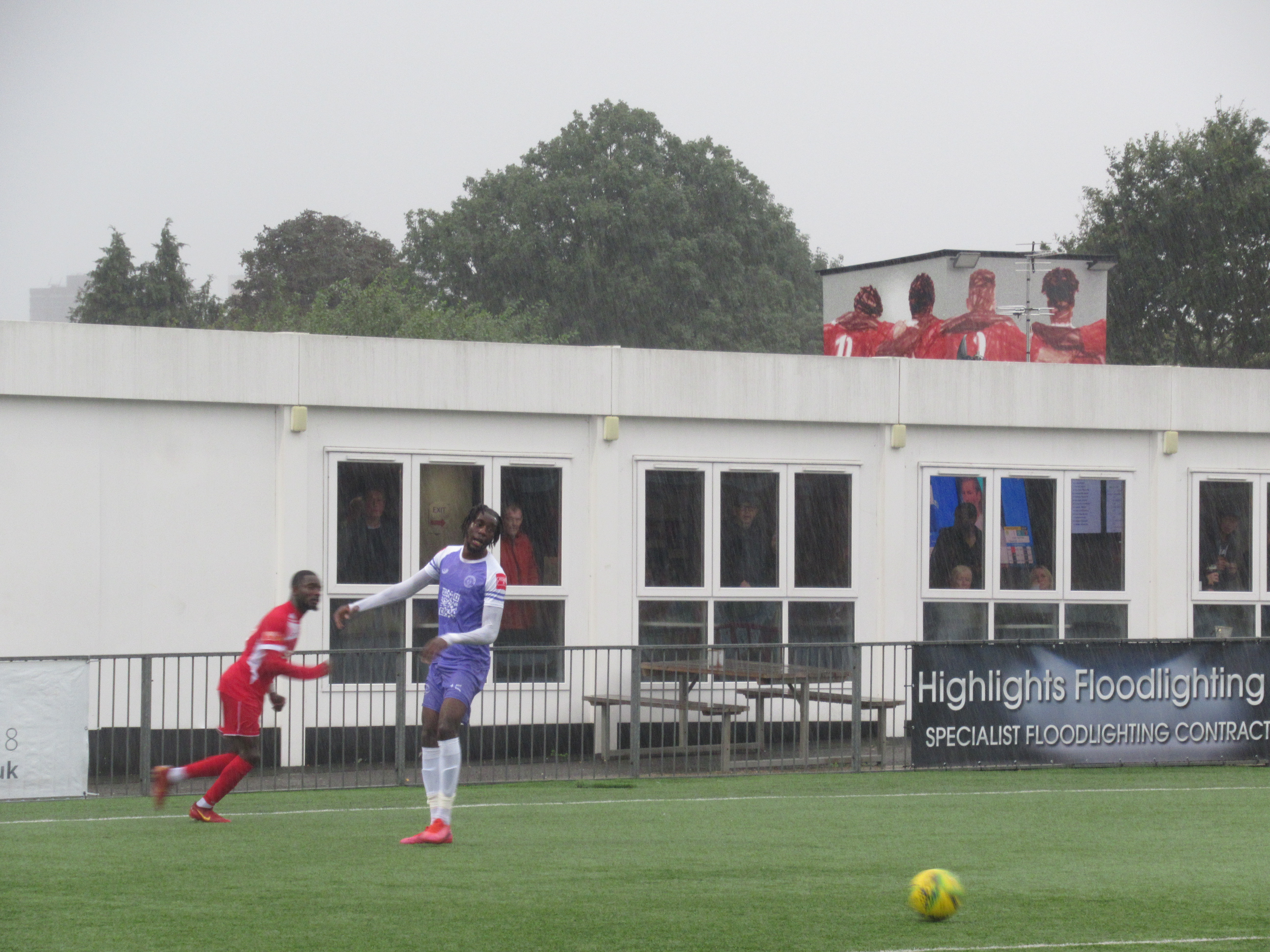 After a difficult set of results the final whistle came as music to the ears of the players and fans and where during September luck was totally against the side, this was a dogged and strong performance against a side which will almost certainly be there or thereabouts come the end of the season. Inspirational performances from the senior players like Turner, Beckwith, McCoy, Cook, Drury and Coombes was supplemented by some mature displays from youngsters like Tom Hanfrey, Kasim Aidoo, Jamie Yila, Richard Afrane-Kesey and in particular, Cameron Brodie who was superb in midfield.

The win moved Cray up to 15th place in the league table on 9 points and next travel to 6th placed Haringey Borough on Saturday 9th October.