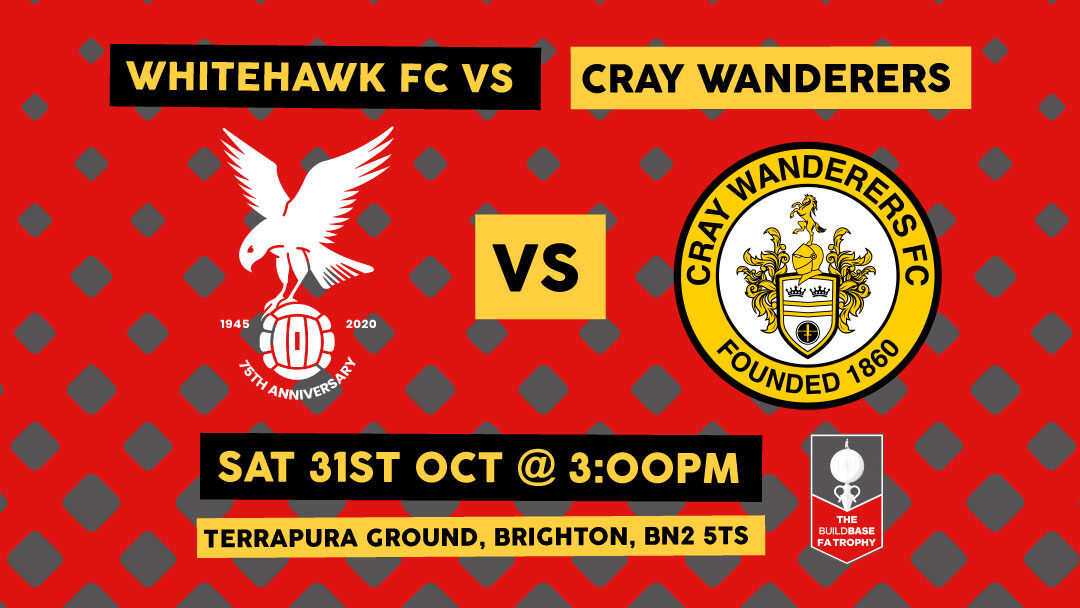 Cray Wanderers moved into the 1st Round proper of the FA Trophy for the very first time after a professional performance saw the Wands through which was a tricky game at Whitehawk.

On Halloween Tony Russell’s side saw that there will be no scary outcome to the game against a spirited and quick Hawks side with two first half goals with Rhys Murrell-Williamson continuing his recent fine form with the opener on 20 minutes.  Whitehawk were well in the game up to half time but three minutes into stoppage time, Charlie Allen made it 2-0 with a classy finish for his third goal of the season.

The second half saw Cray complete the victory with substitute Freddie Parker firing in a shot from just outside the area and with a strong defensive performance Cray earned a second straight clean sheet to make it through to the 1st Round.

It looked like the game would be a washout on the journey down to Brighton but it brightened up completely for the start of the game to actually feel fairly mild and without a cloud in the sky from kick off.

From the side which beat Merstham on Wednesday there were a handful of changes to the starting lineup with Martin Onoabaghbe in for Mitchell Nelson, Barney Williams for Tom Carlse, Lee Lewis for Tom Phipp, Kyron Richards making his full debut for Freddie Parker and Charlie Allen for Bradley Pritchard.

Jude MacDonald’s Hawks side were nippy and quick from the off and Luke Emberson found Henry Muggeridge down the right who cut to the byeline and won a corner.

Then after five minutes, Lloyd Cotton found Emberson down the right and his cross-shot was aiming for the top left corner but Lewis Carey did well to claw the ball away under pressure.

Cray though were gradually finding their feet in the game and the impressive Charlie Allen and Joe Taylor combined to set up Rhys Murrell-Williamson whose shot was deflected through to keeper James Broadbent.

Then Taylor played the ball out to Jason Banton down the left who set up Lee Lewis who fired wide of the left post from 20 yards.  Then from a free kick out on the right, Murrell-Williamson curled a shot round the wall and Broadbent did well to push the ball out and block as Banton followed up.

The Wands went ahead in the 20th minute when one of a number of imperious headers from Jay Leader up against Lewis Unwin in his own half fell to Joe Taylor who played the ball out to the left to Banton who close to the touchline played a pass into the area to Allen who held off Lloyd Cotton to play the ball across the box to Murrell-Williamson who was unmarked to score from six yards for his fifth goal of the season.

Whitehawk looked to recover straight away and won a corner down the left but the defensive partnership of Onoabaghbe and Leader were winning headers and tackles and kept Carey reasonably quiet for activity.

Cray looked to score a second and Banton played Taylor through who shot over but was flagged offside.  Then a mishit clearance from Broadbent fell to Ben Mundele 20 yards out but his snap volley went past the right post.

With the game perhaps  just looking like it might peter out before half time, in the third minute of added on time, Cray scored a classy second goal when Leader found Banton thirty yards from goal evaded one challenge and played the ball towards the area to Taylor with his back to goal and despite the close attention from Frankie Chappell flicked the ball into the area to the onrushing Allen who from 14 yards buried the ball under Broadbent to make it 2-0 at the break.

The second half began with Whitehawk still looking lively going forward and Abdulla played the ball into the area to Lucas Rodrigues but his effort was blocked by Leader.

Whitehawk came close to pulling a goal back when from a free kick out on the right the ball played into the area was cleared out to Lewis Unwin who hit a fine goalbound shot which Carey did well to turn round the left post for a corner.

Cray were steadily looking to take the sting out of the game and almost scored a third when another fine ball from midfield from Allen was left by Taylor for Banton who broke through and his attempted chip saw Broadbent make a brave block to turn the ball away.

Still any Whitehawk attacks were being stymied by the Wands defence and the impressive Cray subs bench saw Tom Phipp and Tom Carlse introduced to add their experience for the last half hour.

Another good performer on the day, Murrell-Williamson was found by Mundele and Kyron Richards and his near post cross-shot was pushed over the top by Broadbent.

Then from a free kick on the right of the area Murrell-Williamson’s shot towards the far post was saved by Broadbent at the second attempt.

With four minutes to go and the game perhaps drifting to its finish another Cray substitute, Freddie Parker continued his free flowing form in the early weeks of the season. From a throw in down the left, Barney Williams found Leader who worked his way to 20 yards from goal and played a pass to Taylor who again held off Chappell’s challenge to set up Parker who from the edge of the box placed a shot which Broadbent couldn’t keep out to score his eighth goal of the season.

Whitehawk had played their part in the game and backed by their noisy, Halloween costumed fans kept going to the end and Ahmed El-Abd and Martin set up Ronald Sobowale in the area but his first shot was blocked and the follow up attempt cleared.

In the end though, Cray had done enough to win the game and advance forward into the competition as the National League clubs begin to enter the competition. A week ago at Canvey Island there was disappointment but a week can be a long time in football and two good performances, goals and back to back clean sheets have put Cray in good heart ahead of what might be their last game for a while at Bowers & Pitsea on Tuesday night in the league. Defensively sound, Charlie Allen gave a masterclass in midfield and Taylor in centre-forward play up against an experienced campaigner in Chappell. Richards, Lewis and Onabaghbe showed the youngsters are very much at home in the side and the two wingers a constant threat.

If this is to be the last Saturday match for a while then it was a good day out, lively but fun atmosphere, decent cup tie and well refereed.